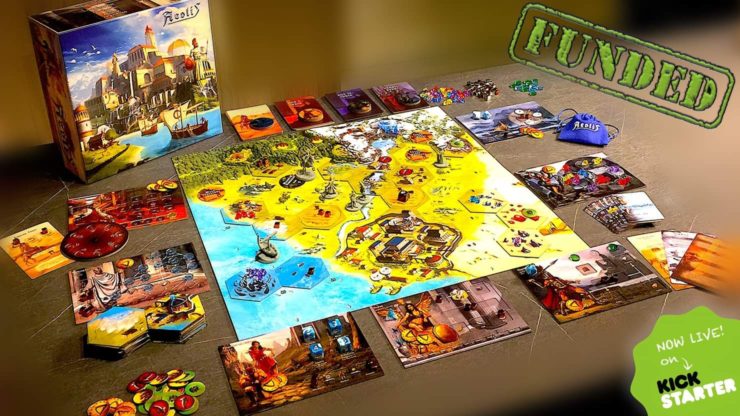 Dreamcraft Games are launching their new fantasy-themed miniatures game, Aeolis, on Kickstarter! Aeolis is set in an alternative ancient Greek setting, continuing the company’s focus on strong narrative, as seen on their first successful campaign,  Theosis! This time, the Dreamcraft team created a fully cooperative asymmetric kingdom-building experience for 1-7. Let’s take a deeper look at this epic game!
Please, keep in mind that the artwork and rules are both not final.

Your goal of the game is to survive the upcoming invasion, protecting your Kingdom. Furthermore, hardcore Heroes can always add a Heroic Quest on each game where completing it will add another layer of difficulty.

The game is set into an alternative ancient Greek setting where you live in a Matriarchal society. You take on the role of the Heroes of Aeolis, a fairly young island city under the reign of its Queen. Together, you will protect Aeolis, help it evolve and maintain its prosperity.

The game comes with 3 different difficulty modes (Easy – Challenging – Hardcore) and 3 playing modes (Sprint – Marathon – Scenario). Choose the duration and difficulty that fits best to your group before starting the game.

The game is divided in Rounds, usually 10, and each round consists of 4 phases.

Let’s take a quick look of the phases:

All players play simultaneously on each phase and Heroes have their own aid card(s) for each phase.

Actions that happen automatically are resolved now. Then, all buildings produce by rolling the production die for each. This can result to the production of up to 5 resources, paying a Gold to the Queen, or even being infected by the Plague!
Any workers in training now become trained, and Scientists produce Research. A newly trained Scientist immediately produces Research. Lastly and most importantly, Events are drawn!

All Heroes are taking their unique actions. Check out each individual Hero to discover how they play!

Events now resolve. This may result in numerous intriguing and challenging situations.

Now it’s time for game resources on building to be distributed to players. The Queen player resolves any ties. Players can also exchange goods, resources, Etc.

Then, assign workers for training and allocate the gold needed. During the setup phase these workers are trained.

There are 7 available Heroes in Aeolis, each with their own game-play and set-up.

In a non-scenario game the Queen, Merchant, Philosopher and either the Hoplite or Magi are always in play, regardless of number of players. Thus, you can even include all 7 of them! Divide all active Heroes among players before starting an Aeolis game.

The Queen of the Acropolis 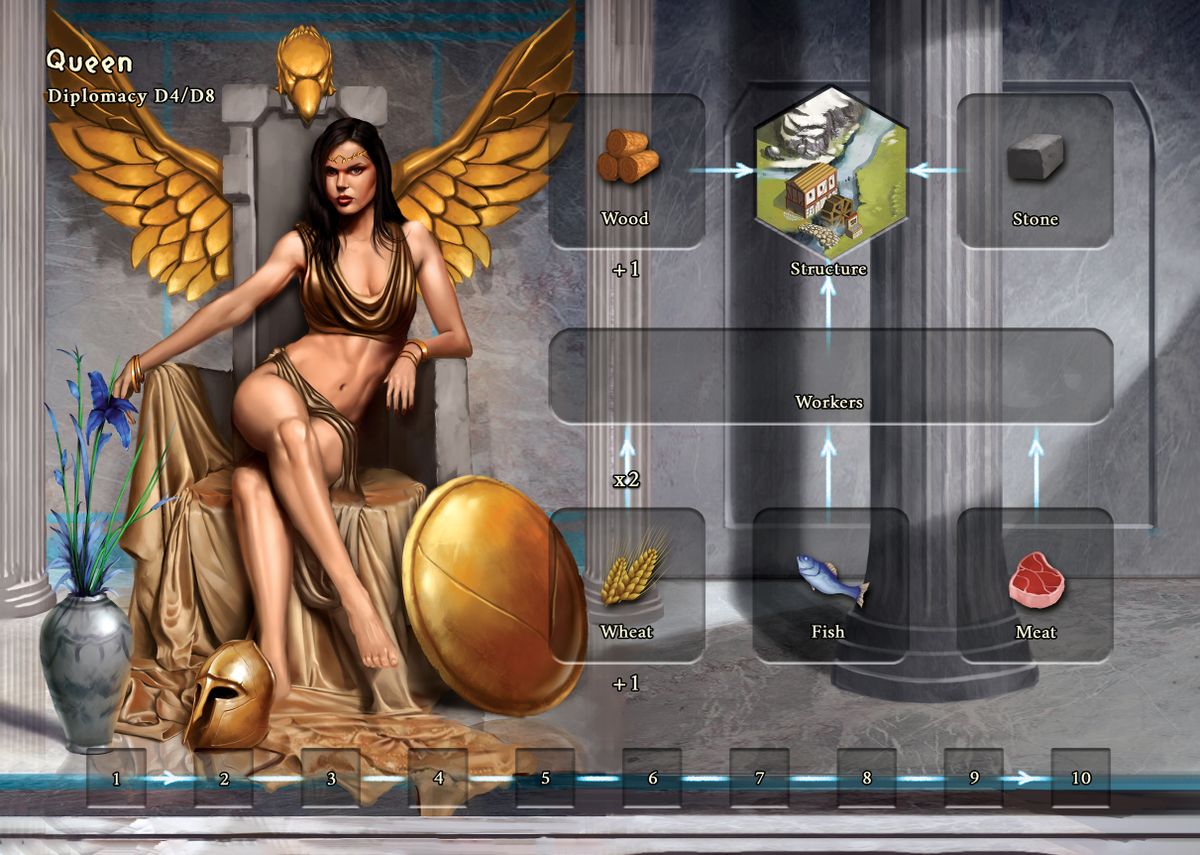 As the Queen, you are responsible for coordinating the flow of the game, apart from your game-play abilities.

The Merchant of the Agora 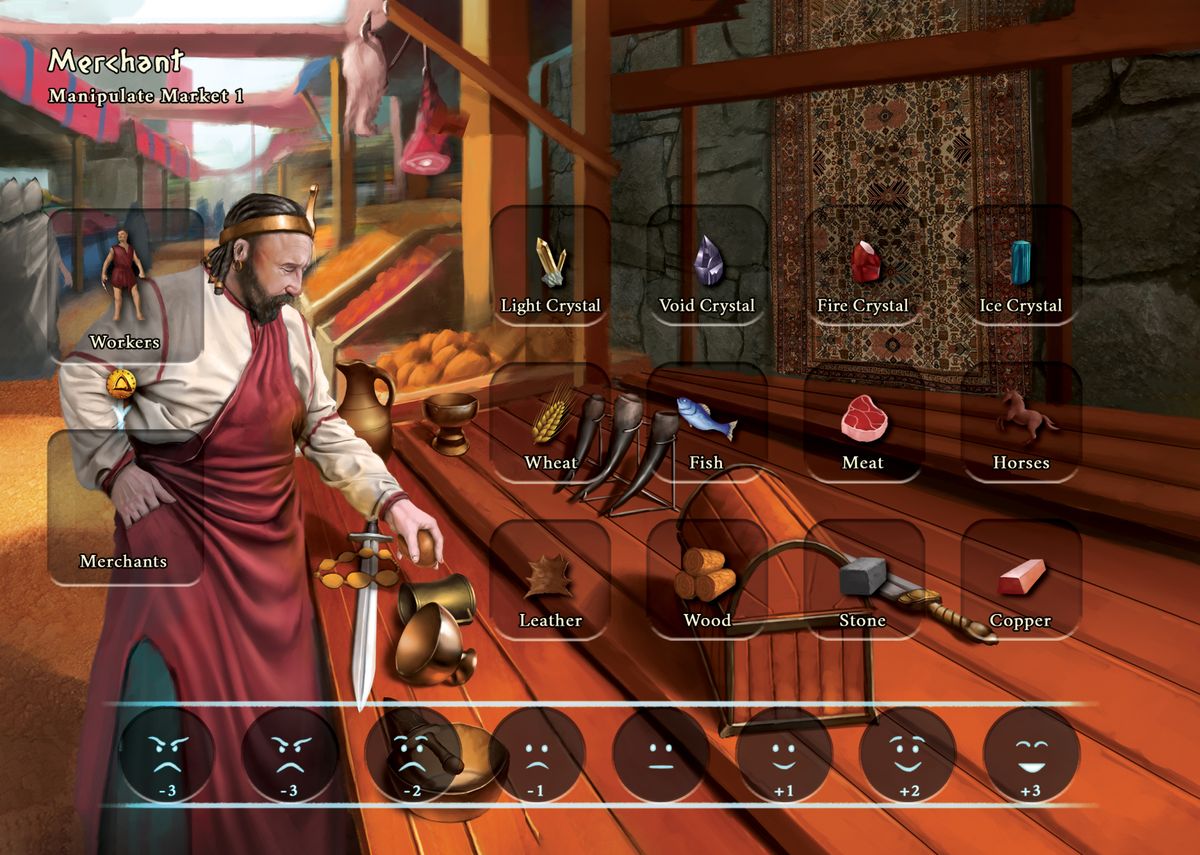 As the Merchant, you will be responsible for the trading in the city. Resources and gold are vital for your city’s prosperity!

The Philosopher of the Academy 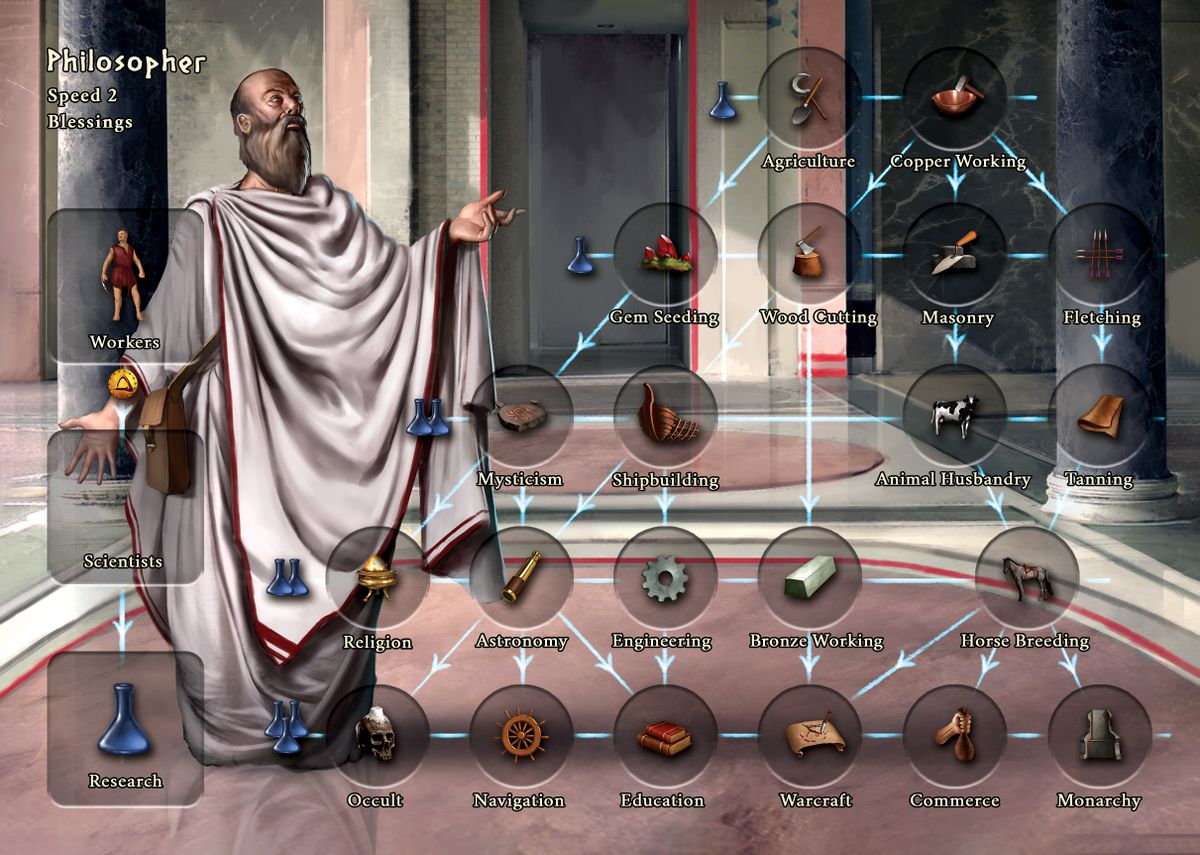 As the Philosopher you will discover new technologies and structures, so they can come to life and advance your society.

The Hoplite of the Arena 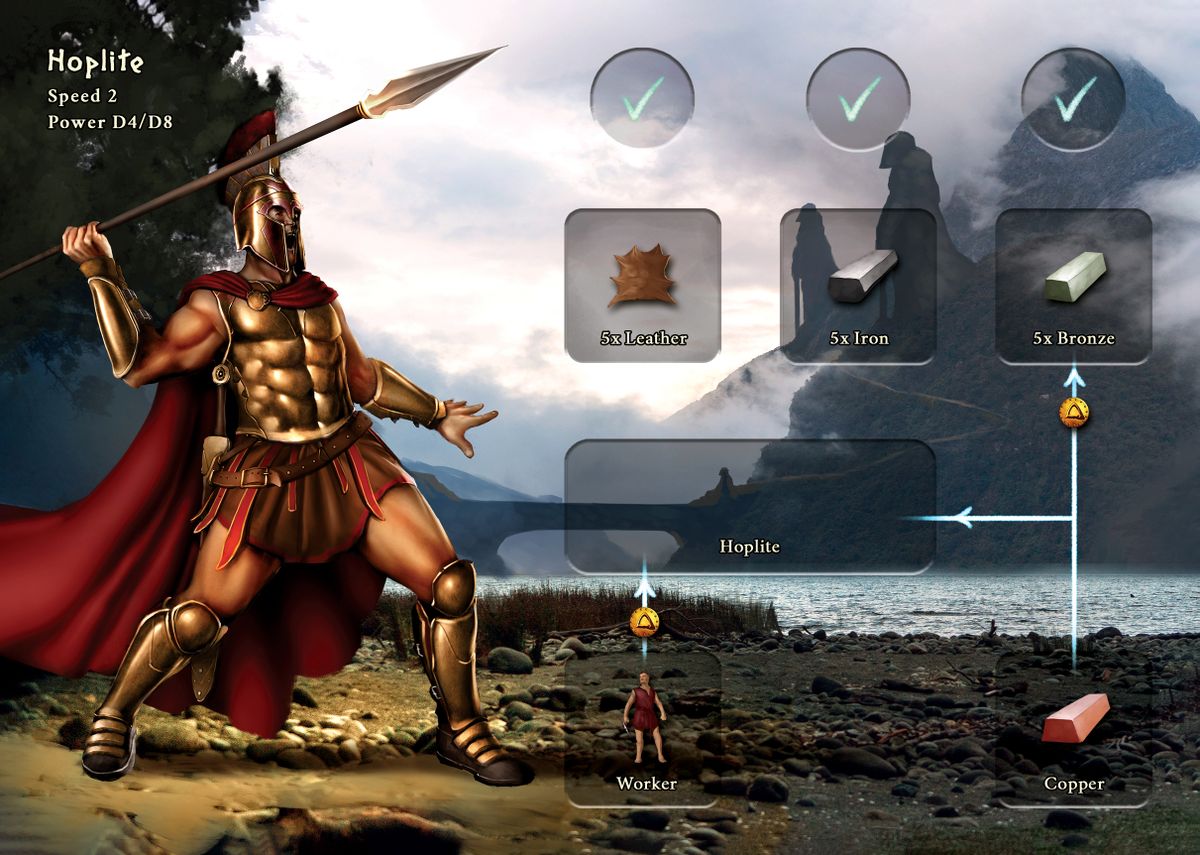 As the Hoplite, you are the fighting force of Aeolis and its only defense! You will manage your brave troops and bring them to battle.

The Priestess of Balance of the Temple 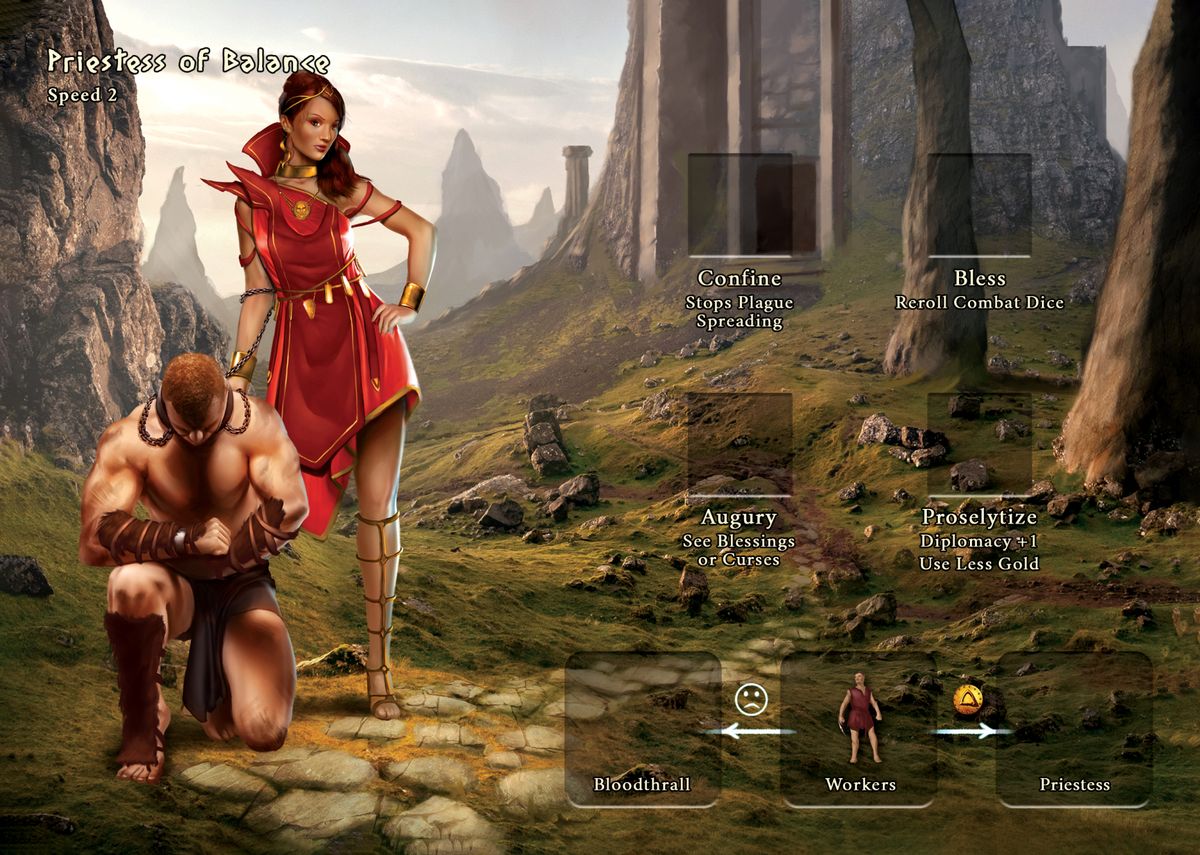 As the Priestess, you will tame everything that is out of human reach.

The Serpent Magi of the Oracle 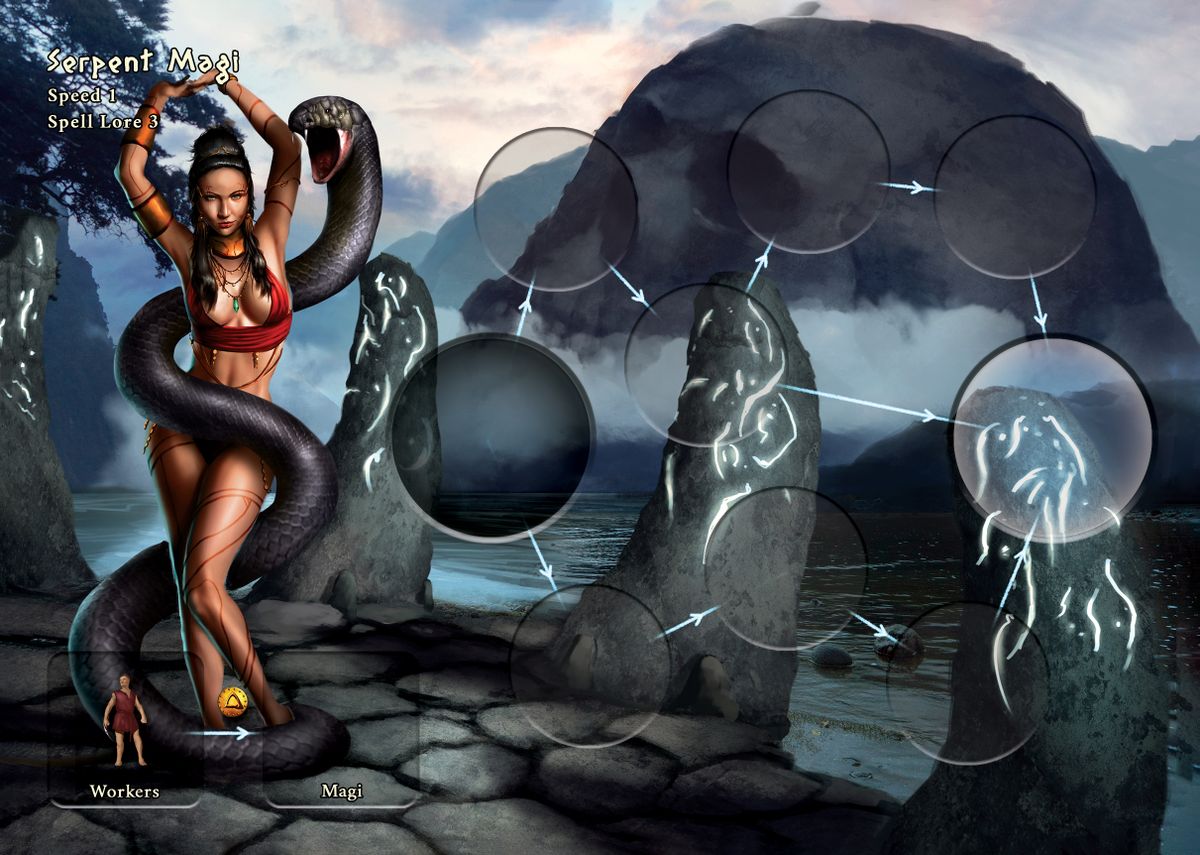 As the Magi, you will use your magic to assist different fields in need.

The Triaconter of the Harbor 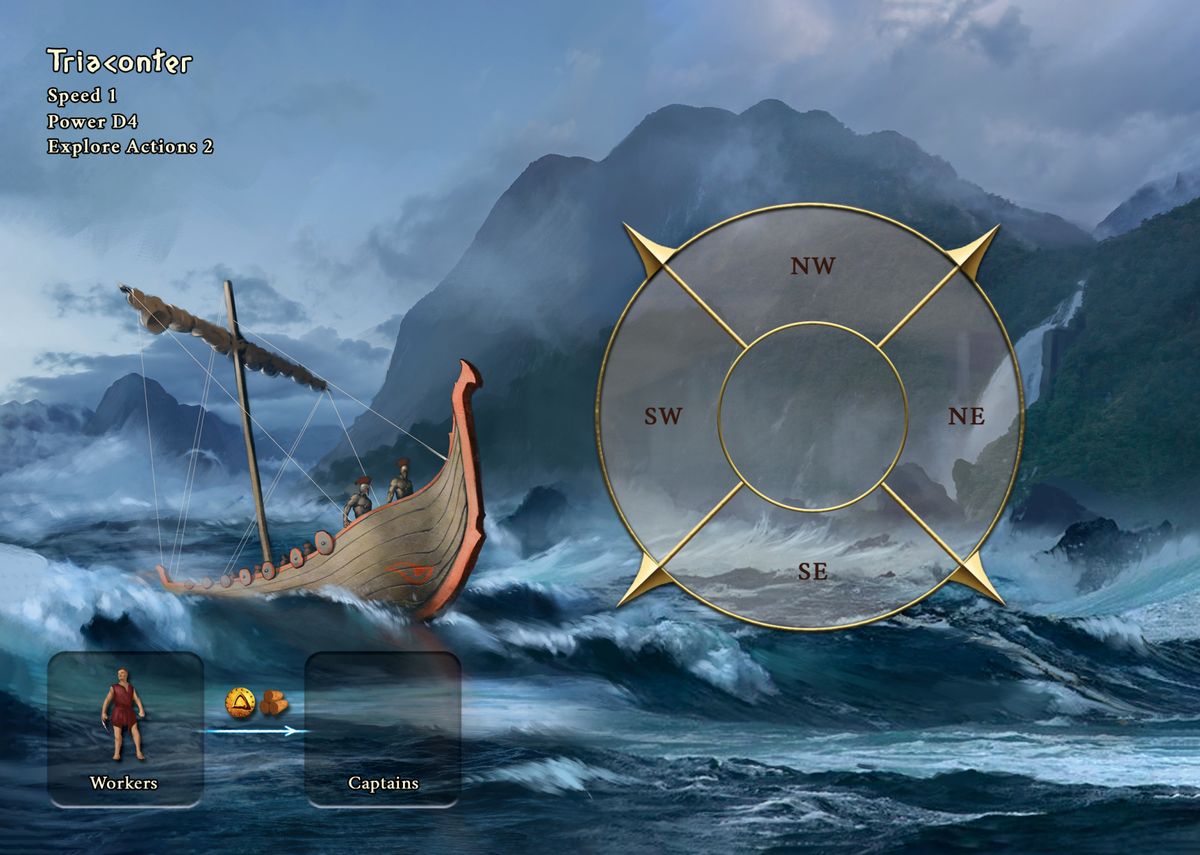 As the Triaconter, you will travel through sea to great adventures and battles.

It’s important to mention that all Heroes can have upgraded powers by unlocking certain research. You have to collectively choose wisely which ones to research, gaining the most valuable advantage for the active play state.

There is also a map of hexes included in the game, where the most action takes part. Apart from the Queen and the Merchant, all Heroes can move through the map that many hexes as their speed value, along with the worker of their type, most of the time.

In a basic game of Aeolis the game Ends once you survive the 10th and last round. Of course, you might lose the game much earlier, by not being able to confront the Invading army! Invasion events summon powerful armies that are considered to be of all army types, making them even harder to defeat. The Invasions happen in specific rounds, depending on the scenario, thus you have to effectively prepare for the upcoming invasions! Good luck Heroes!

Aeolis is a highly thematic game, where you collaboratively create a narrative through its game-play. Games that don’t include story-telling mechanics and still manage to create a story are amazing. Your imagination and human interaction will be the narrator, that’s why you have to dive in with a clear mind. Get ready to be invested in such an experience and tease your brain with the various challenges that the game will throw at you. Aeolis it’s not a difficult game to learn and play but it needs collaboration and strategy to be victorious.

First and foremost, this is a game for those who love cooperative games. If you only like competitive games, this isn’t the one for you, even though it contains player interaction on the table. Secondly, if you like games with strong flavor, you will definitely love this world. Due to the game’s theme, luck and dice have a big role in the game, creating these moments that make our hearts race. The most appealing part for me, is being able to take on a role of a unique, asymmetric Hero. Your whole game-play style differs, making you a valuable asset to the team, enhancing team-play.
Lastly, I have to highlight the city-building aspect of the game, where you collaboratively build the process of your community. This will decide whether your civilization will prevail or be lost into history.

Aeolis Core Game with all Stretch Goals comes at the price of €80. Did you think that 7 unique Heroes are a lot? 6 more Heroes come into the form of Mini-Expansions for you to add in your pledge!
Do you want any Add-On to enhance your game? An Advanced Lorebook and Greek Metal Coins can be purchased as add-ons!

You can always choose the €145 Collector’s All In Pledge that includes everything mentioned! I also have to mention a new addition to the Pledges, the Family Pledge. That is a version of the game with family-friendly artwork. An action that we have never seen before from a publisher, responding to their fans’ demands of less provocative artwork. Even this is not beneficial for the company in terms of profit, Dreamcraft Games values the people’s point of view enough to go the extra mile.

If Aeolis sounds like the game for you, make sure to check it out on Kickstarter and support it! 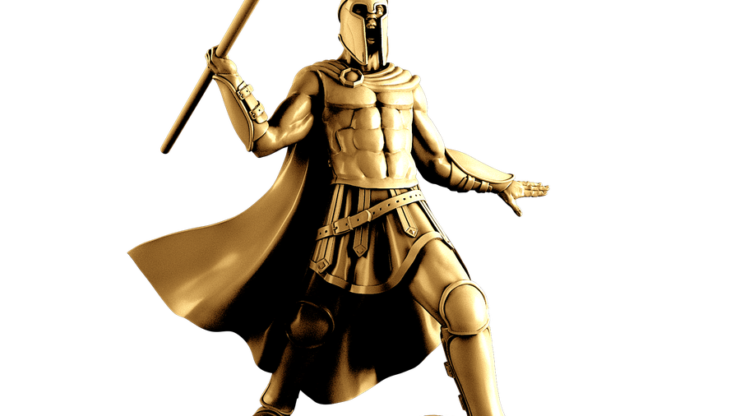 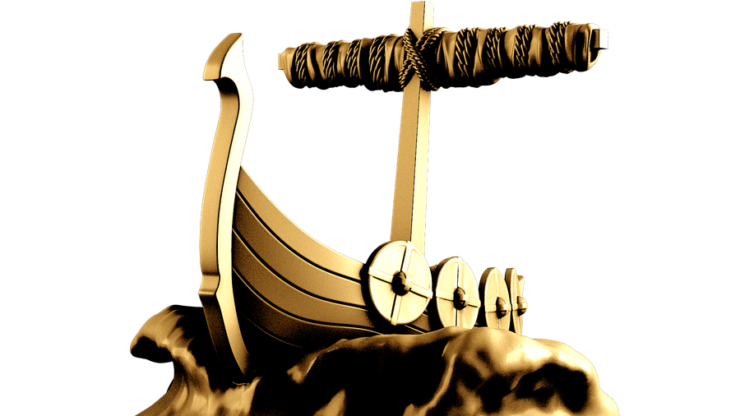 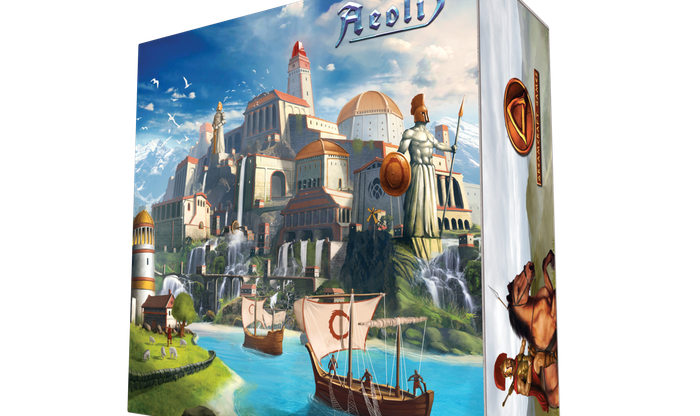 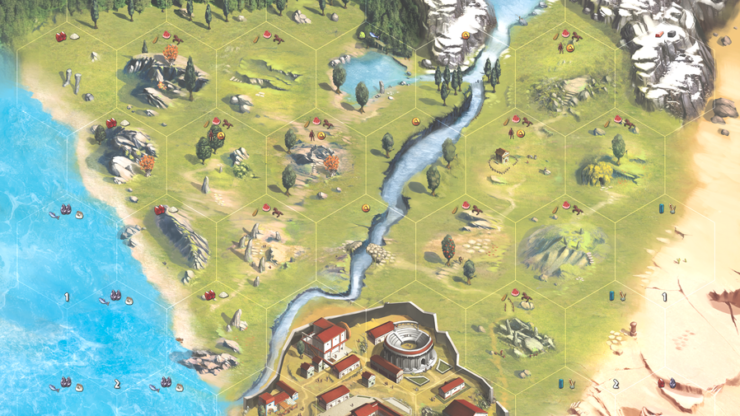 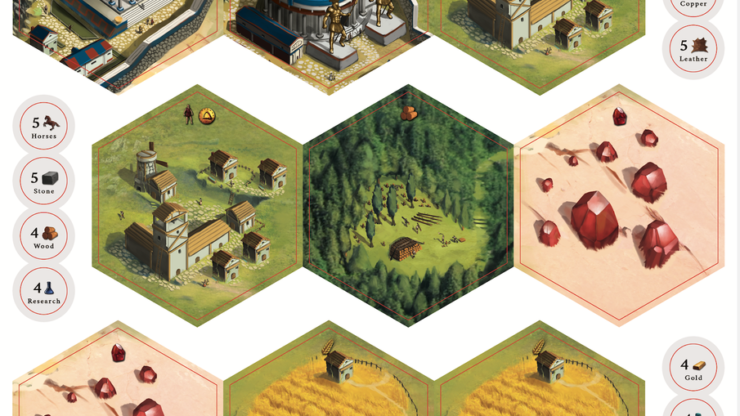 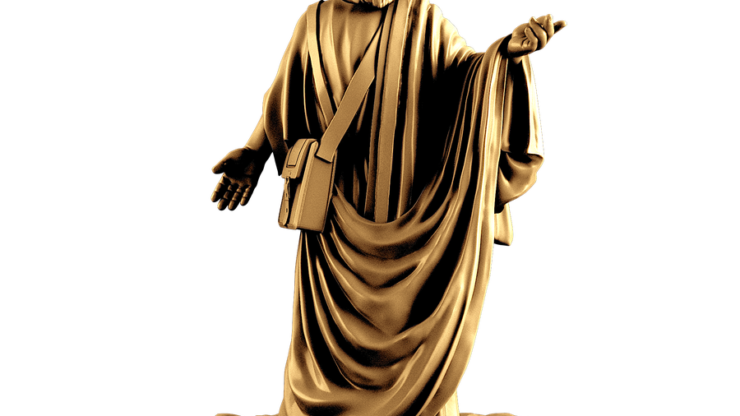 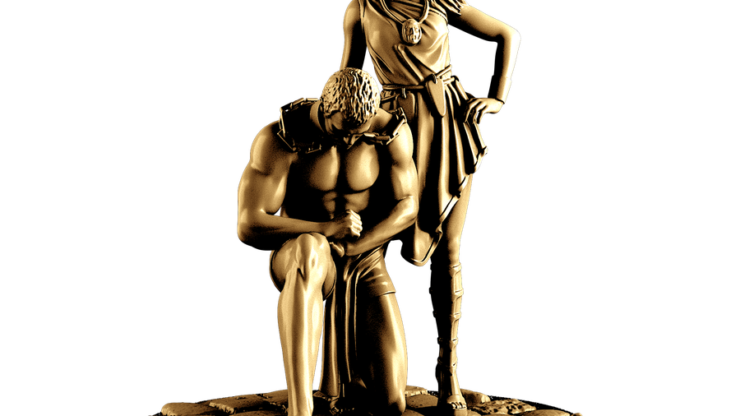 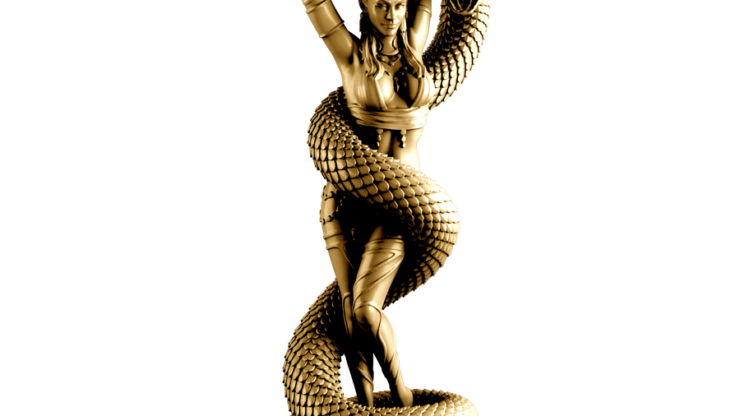