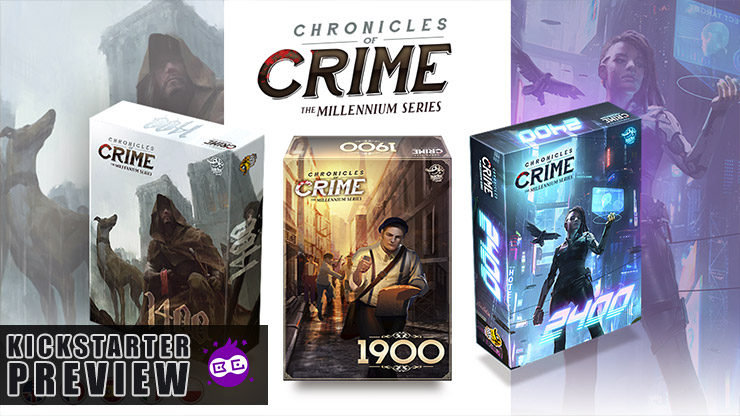 Chronicles of Crime the Millennium Series 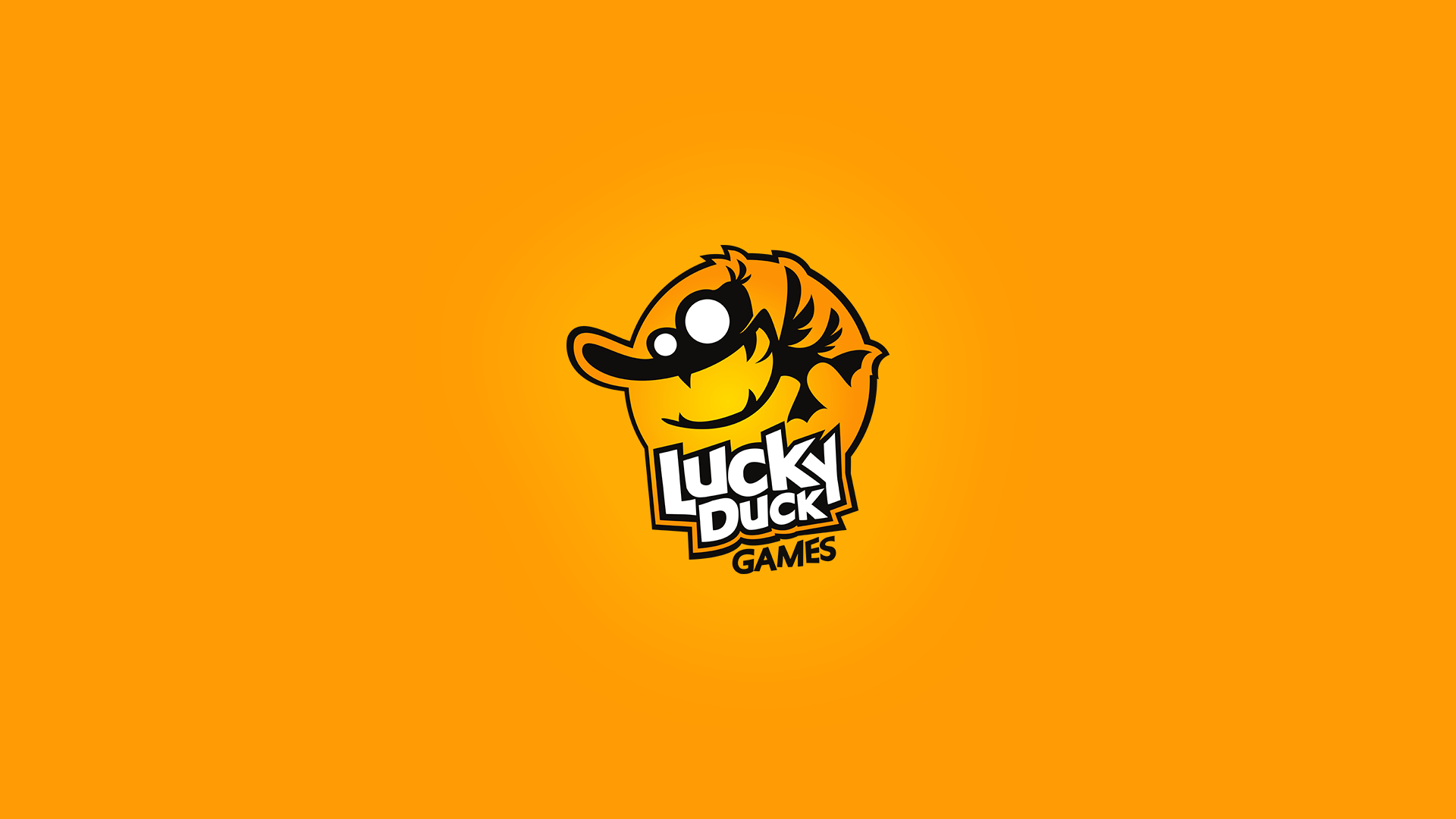 Lucky Duck Games is launching on Kickstarter three standalone Chronicles of Crime games, and this is extremely thrilling for me!  These will be called the Millennium series and there will be a connected narrative following Lavel’s family unique story throughout the years. Their name refers to the fact that the first game is set in 1400, the second in 1900, and finally the last closes the millennium in 2400!

That’s the perfect timing for me, as I have only about 4 scenarios left to play from the official ones released thus far. This includes all the extra scenarios from their previous Kickstarter, along with the two extraordinary expansions, Noir, and Welcome to Redview!

I will share a small overview of each game, what’s new and what you can expect from it, and then I will share my opinion on the system. 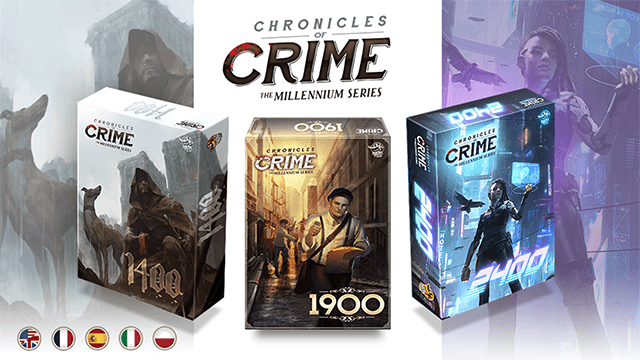 The Chronicles of Crime hybrid system is well received by now. It brings a digital experience to your table, taking advantage of modern technology to enhance your experience in intriguing ways.

The Millennium series introduces new twists to the system while taking place in diverse settings. Each game will take advantage of new and different elements, providing an experience fitting its time. Another great element is that each one plays on its one, without the need for any extra purchases. With that being said, a whole story-line along with Easter eggs is hidden behind the series. This just makes it impossible for me to pass on any of those three games!

The Chronicles of Crime system

Chronicles of Crime comes with an App that is mandatory to use in order to play the game. It’s a well made digital App that works smoothly and delivers an amazing experience!

The system uses a total of cards that includes Clues, Special Items, Locations, and Characters. Additional cards might be used according to the package you are playing with. All these elements are identified by the App via QR codes. So, just scan a Location to travel there, or scan an available Character to enter Interrogation mode! Scan any game element available during interrogation mode to ask about it. This leads to countless combinations and to a sandbox feel while playing.

If you ever try the game, I would also recommend the auto-scanning feature of the App. It’s just SO handy! It scans any QR code on the spot, fast and without asking you whether you want to scan it or not.

Another vital concept in the game is time. It’s utilized in many interesting ways and you have to be careful about how you waste it. Traveling into a location takes 20 in-game minutes and any other scanning action takes 5 in-game minutes. Time also affects your total score, when solving the case. The sooner, the better! Given that you can successfully solve it of course. Then, it may affect you in ways like in real life. A store might be closed at a certain time, or a serial killer might hit again with another victim if you are not cautious enough. Cool, cool stuff!

Lastly, my favorite part, is the crime scenes or any scenes that are important in the plot. You can take a look at these scenes in a 360o view or even better, with the 3D Glasses! Of course, I own them too and I feel like a child again when I’m about to inspect a scene. The glasses may have a less clear visual result but diving into the 3D space is an immersive feeling. After you inspect a scene, you can scan the various item categories, searching for clues. This is the most important part of your investigation, as this evidence will move your plot forward.

“You are Abelard Lavel, a knight sworn to King Charles VI the Beloved. You live in the city of Paris in a family mansion not far from the famous Notre Dame cathedral. Since you were a child, you had strange, prophetic dreams in which you saw violent scenes of past crimes or even ones yet to be committed. Over time you learned that your unusual gift could be put to good use and you started to solve cases that nobody else could crack. This earned you some reputation in the city and now people seek your help whenever a mysterious crime is committed.”

I love the way it connects these old aesthetics with some supernatural elements. We have never seen anything like that yet in the system and I find it exciting! These unusual gifts are introduced in the form of Vision cards in the game. A new mechanic that will let you have a glimpse of the future or the past, connecting various not yet seen items and characters.

Instead of having colleagues for support, like the Hacker and the Morgue, now you are having your family to support you. They will share their knowledge, like your uncle, a monk who has a wealth of knowledge about written texts or your brother, a king’s spy, who knows a story or two about many of the people you will meet. Lastly, an unexpected addition is your faithful dog, who can trace a suspect by sniffing an item belonging to them!

“You are Victor Lavel, a young ambitious journalist working for a major newspaper. It’s the year 1900, the middle of the Belle Époque, and Paris flourishes. There are so many stories to cover, the Exposition Universelle, the Summer Olympics, the opening of the first metro station, but as a Lavel, a family famous for solving crimes since the Middle Ages, you are much more interested in murders, kidnappings, and robberies. Being a journalist helps you beg among the first ones to know about them, and your wits often make you the first one to find the perpetrator.”

When I first saw the 3 games announced, this one was my least favorite, thanks to its theme. After reading more about it though, oh boy, it won me over! The art is phenomenal, right up my alley and on top of that, they introduced Escape-Room-Style puzzles on this one!

The funny thing is that the system itself is a puzzle, so I didn’t miss any logical puzzles of that type, but as I read the announcement it makes perfect sense. This element fits the nature and the theme of the game, probably making it more challenging. I don’t want to brag about being a great detective, but I’m up for an extra challenge!

All these new puzzles will have strong thematic ties in the game, such as guessing the right combination to open the safe or tracing a suspect by navigating a map. Your puzzle assistant will be Charlotte, your “Puzzles and Riddles” column colleague.

“You are Kalia Lavel. You’ve always wanted to fight crime like your famous ancestors, so you joined the elite BelCor forces. They turned you into a highly trained cyber-agent, but it didn’t take you long to figure out that your bosses cared much more about their profit than about justice for ordinary people. You turned in your badge and now you live in a tiny apartment in a bad neighborhood, stripped of most of your cybernetic implants. It doesn’t matter though, as you can finally do what a Lavel is meant to do: solve crimes and help those who can’t count on anyone else in this merciless world.”

Finally, we reach 2400, which is my favorite out of the three. The reason why is that I see many interesting ways that this “technology-driven” era can be used to skyrocket the game’s experience. Your Cyber-Raven pet will analyze evidence and search the web, you will obtain cybernetic implants and use super-senses, and more extremely cool stuff!

Since this is the future, it’s not history to us, thus they can get wild with their imagination and that’s why Lucky Duck did. We see a futuristic Paris, where you can’t differentiate humans from androids anymore and AI has created a Cyberspace world which is now equal to the real one.
Additionally, we encounter class warfare, as only the rich can live in a private city that has unlimited resources and a quality life found nowhere else.

This setting will let you explore a new world in itself, that’s why it intrigues me the most, adding a new layer to the game!

When a Chronicles of Crime Game Ends?

Typically, (so I won’t spoil anything for you) a game of COF ends as soon as you feel ready to solve the given case. A “Solve Case” button will be available and you will be going through a set of questions. Your total score will take into account the number of hours it took you to solve the case apart from your correct answers.
After celebrating your victory or stay wondering what went SO wrong with your investigation, the Solution button will be available. Even though you might know the answer to everything, this will guide you through the story in more detail, offering the solution.

You certainly must have a clear mind to play a scenario of Chronicles of Crime. You are about to enter an investigation, we need you at your best possible form! According to the difficulty of the scenario, there might be many elements that you have to connect and keep track off. Some days ago, I paused a game for my night sleep and then solved the case the next morning, with a fresh mind!

It’s mainly a story-driven experience. The game will unfold the story for you and the combinations of actions from your part reminds me of an extremely advanced “choose your own adventure” game. You will have to talk things through, make collaborative decisions and let yourself be immersed!

Of course, this can be a great solo adventure as well! Or even try it past the 4-player limit. I understand why they have this maximum but I have played it a couple of times with 5 people and it was amazing. Nevertheless, this will work only if you collaborate together evenly, alpha gaming is not a good way to go here.

Thus, if you are up for a puzzly and immersive experience, you are ready to solve a case! It’s closer to an interactive movie experience than your typical board game. Lastly, if you are familiar with digital games of the genre, this might feel close to that.

If you like puzzle-solving, mysteries, cooperation, and interesting stories, you must try this. I would say that this game is for everyone, but there are always people who won’t enjoy or like something. Some might say that this is mainly a digital game since you will be using the App all the time. It doesn’t matter at the end of the day for me. It’s such a fun and unique experience that I get to enjoy with my friends around a table, and that’s what matters.

Another element that I do appreciate on this one is that it takes about 90 – 180 minutes to play. That’s almost impossible for similar games. This is on the top of my list for now, and I have played Sherlock Holmes: Consulting Detective, Detective: A Modern Crime Board Game, and Deadline. All these three are awesome games, but Chronicles of Crime offers the smoothest pacing, keeping you engaged at all times. If that sounds exciting to you, go give it a try!

Another well-structured campaign from Lucky Duck, where no element is unnecessary. The campaign is already funded, and there is a variety of straightforward pledges. You can get one, two, all three games as a package or even a group of 4 packages for a better price!

Make sure to check it out for more details and support it if it’s the right game for you! 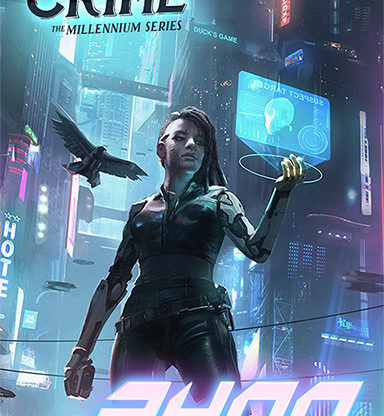 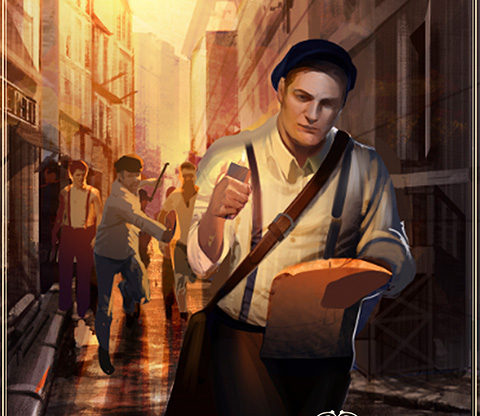 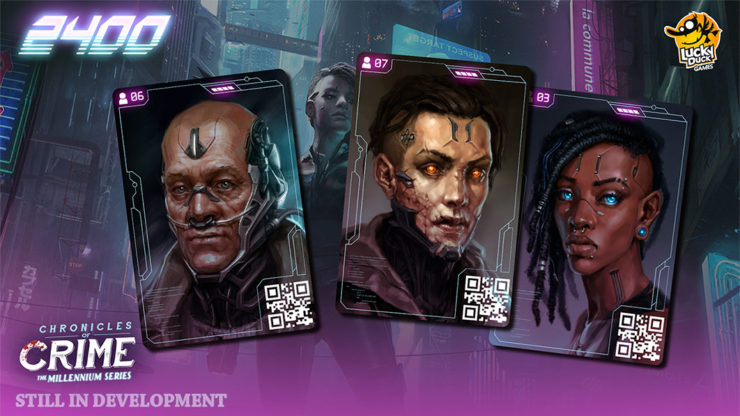 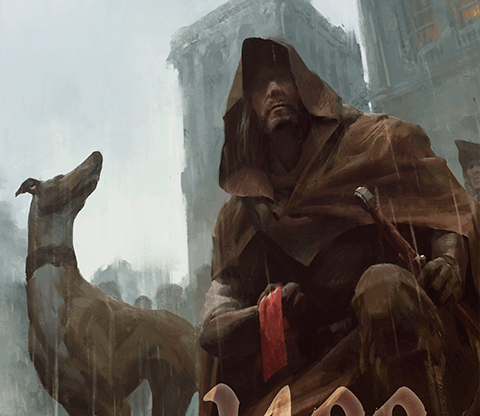