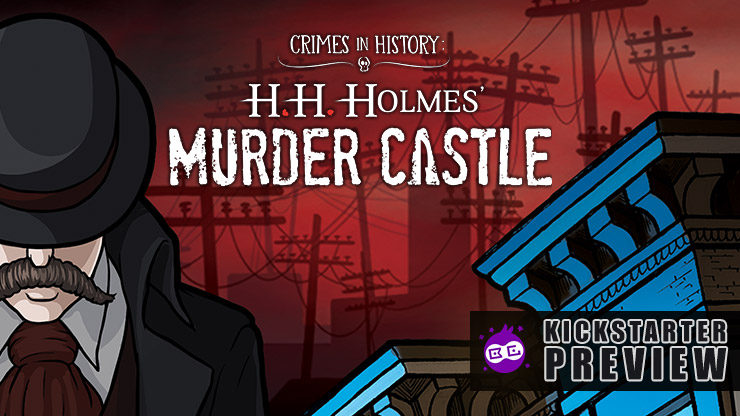 Crimes in History: H. H. Holmes’ Murder Castle is a thematic “racing” game, as you try to be the first to collect enough evidence against Holmes and win the game. You will be exploring the Castle, collecting evidence and encountering challenging situations, along with Holmes himself! You will do all that and more through a simultaneous action selection mechanic that obliterates downtime.

Dr. Henry Howard Holmes, or now more commonly referred to as H. H. Holmes, was a charming and charismatic con artist. He used fraudulent money to build an ac-three-story World’s Fair Hotel, now known as “Murder Castle.” Some guests would check in, but not all of his guests would check out. The hotel was constructed to deceive and torture. Holmes’ Murder Castle included many horrors, and you, a colleague of Holmes, had no idea of these actions.

In the year 1893, after the World’s Columbian Exposition in Chicago, you return to the Castle, after having been questioned by the police. You are now aware of Holmes’s atrocities and the only way to get yourself out of the picture is to find enough evidence for Holmes to be convicted! A challenge of survival awaits you in the Castle of Horror, starting your journey in the Pharmacy.

Your goal is to be the first player to fill your evidence board (with cubes) and make it back to the Pharmacy. Thus, you will have enough evidence to send Holmes to prison, and win!

Your adventure starts on the Pharmacy and Basement. You will create a map with the depicted tiles and the rest of the castle will expand as you explore it.

Each player takes a unique character of their choice, along with the corresponding evidence board. You also gain 1 random Evidence Setup card. This will depict the number of evidence cubes you will start with on each of the 5 Evidence tracks on your board. Each cube represents pieces of evidence on each category.

A set of Action tiles will be available face-up, according to the number of players.

Lastly, Holmes starts on a Basement tile and the Ferris wheel is filled with 5 evidence on each section. 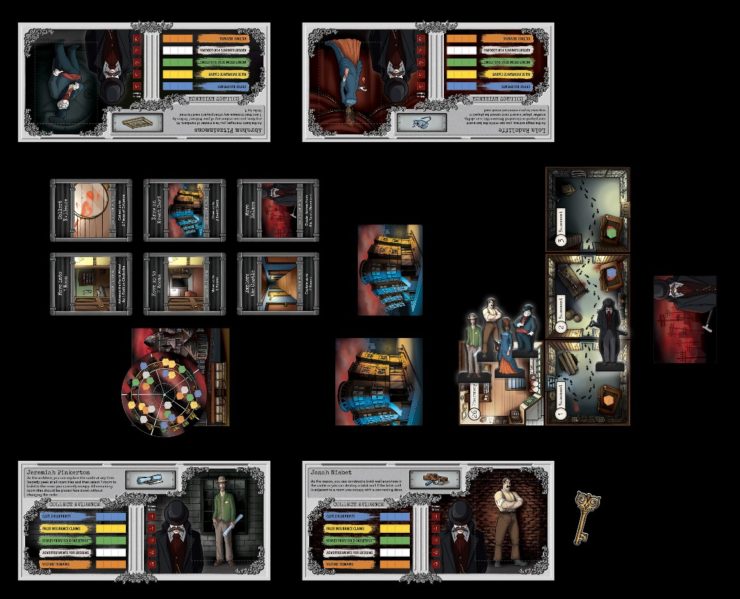 Choose one of the available action tiles. Each tile has a selection bonus that can only be activated by the player who chose that tile. Then, you may perform that action and/or its bonus. Lastly, all other players, in clockwise order, can perform that action as well (not the bonus).

Play continues clockwise, until all players have chosen an action, ending the round.
This simultaneous play is one of my favorite mechanics, seen in other games, like Puerto Rico, Empires of the Void II, Tiny Epic Quest, Eminent Domain and more. It makes the game engaging for all players, throughout its duration.

At the end of a round, Holmes moves and then all action tiles reset, being available once again. The next player in clockwise order becomes the first player of the new round. Play continues this way until a winner emerges.

Basic Action
Reveal the top Room tile from the stack, connecting it door-to-door to your room. Each room depicts the number of Evidence cubes you can find there. Place that number of cubes to that room, taking them from the Ferris wheel. 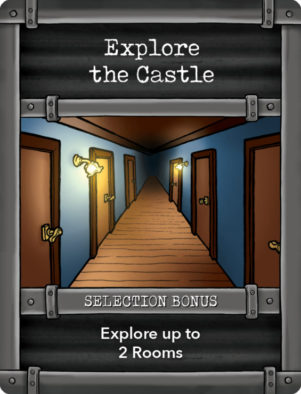 Basic Action
Move into an adjacent room, through a door.

Bonus Action
Rotate the Ferris wheel by one space, clockwise. 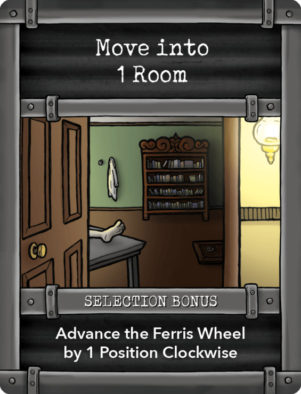 Move Up To 2 Rooms

Basic Action
You may move up to 2 rooms. Like the 1-move action, you can only move through a door, connected to another door.

Bonus Action
You may move up to 3 rooms instead! 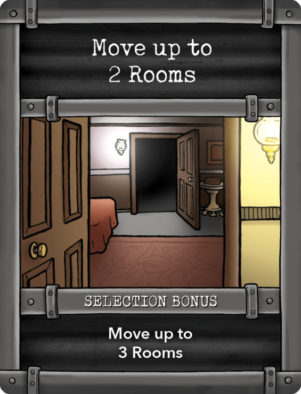 Basic Action
You may collect one Evidence cube of your choice from the room, adding it to your board.

Bonus Action
You may collect an additional Evidence cube! 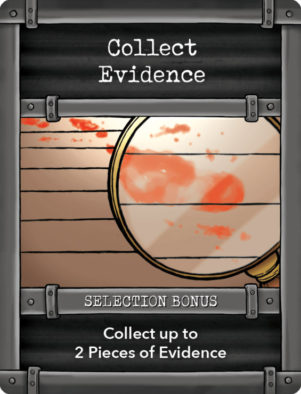 Basic Action
You may draw an Event card, without revealing it to the other players, keeping it face-down on your board.

Bonus Action
You may draw an additional Event card!

You can have up to three Event cards at any time. An Event card can be either a “Play Now” or a “Keep”.  You must immediately play any Play Now cards you draw, while you can play any Keep cards at your own convenience.
Event cards are abilities that break the game’s basic rules, giving you special abilities and effects that will give you an edge! 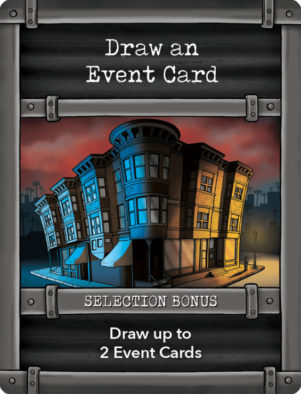 Bonus Action
For this movement, you can evade Holmes, in case he steps in your room, moving to an adjacent room if possible! 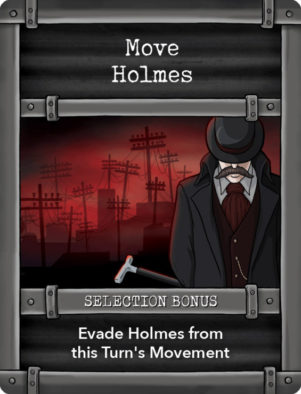 End of a Round

The Round ends as soon as all players had a chance to choose and resolve an Action tile. Then, Holmes moves by revealing a card from his deck. If he enters your room, he will Strike!, making you place a cube in your “Holmes Strikes!” section of your board. This section makes you lose a number of Evidence cubes, placing them back in the Safe section of your room (regardless of its limit).

Apart from that, Holmes blocks anyone from entering his room, and any player already inside can’t collect Evidence.

There are more elements in the game, adding flavor to your experience. You will find hidden pathways, set trapdoors, and explore special rooms. In the special rooms, you will find new rules that may hinder your progress or boost it if you use them wisely!

All characters have a once-per-game ability which you have to use at the right time, taking advantage of its use.

Lastly, there is a chance for Holmes to go on a rampage, running into multiple rooms, possibly striking many players!

When a player completes their Evidence board and returns to the Pharmacy, the game ends. That player is the winner!

Crimes in History is a thematic light to mid-weight game. A Film-Noir style mystery experience that ends up being a race for survival. While being easy to learn and play, you will encounter many meaningful decisions while having to pay close attention to your opponents. Many choices will have to be made with their position and progress into account. Thus, this game requires your full attention throughout the session (especially as you also take actions during other players’ turns).
Low lighting and a Noir or Crime playlist will do the trick, setting up the right mood.

The game seems to have the right blend of strategy and luck (adding to its theme of unexpected). If you are a fan of crime-themed games with a strategy aspect (as many are focused on a social aspect), this might be the game for you. The simultaneous action mechanic is definitely a bonus, especially if you are concerned about downtime or being bored during other players’ turns.

Additionally, the game comes with an exploration and adventure aspect, as you discover a new map of the Castle on each game. This adds to both the replay value and the narrative of the game.

This addition to the game includes 5 new rooms and 9 new Holmes movement cards. The rooms bring a second level to the board, where you can have access only by stairs and hidden passages. Lastly, all these are Special Rooms, adding to the replay value and experience of the game!

If Crimes of History sounds like a game that you would enjoy, make sure to check out its campaign and support it! 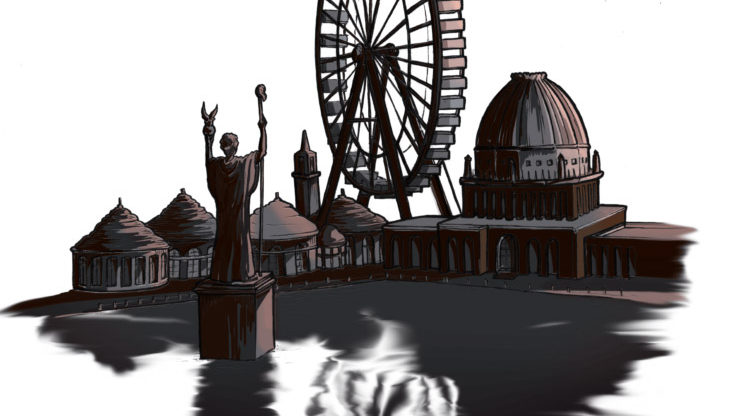 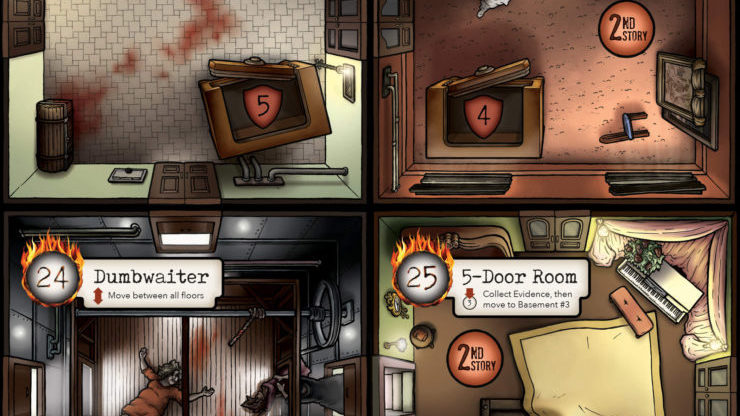 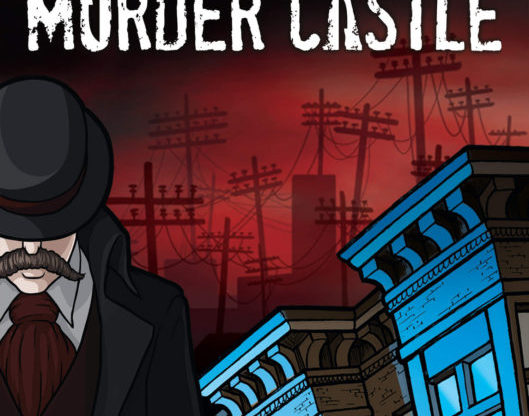 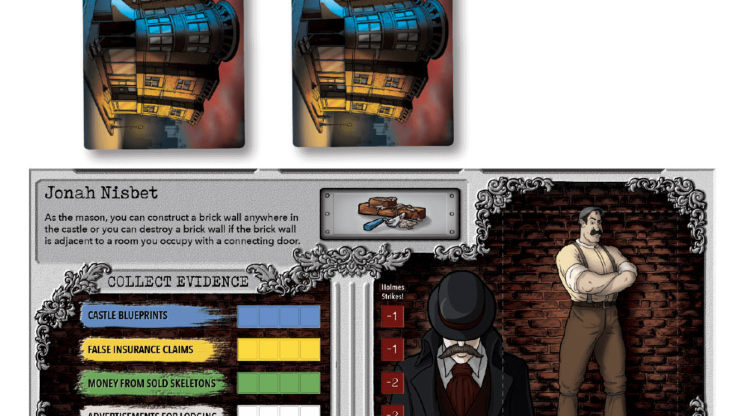 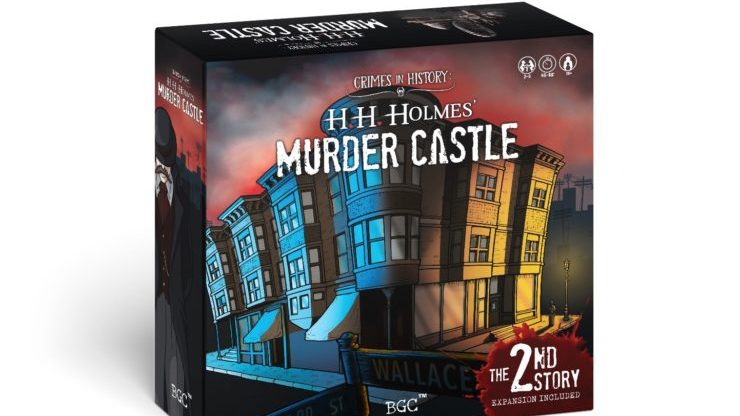 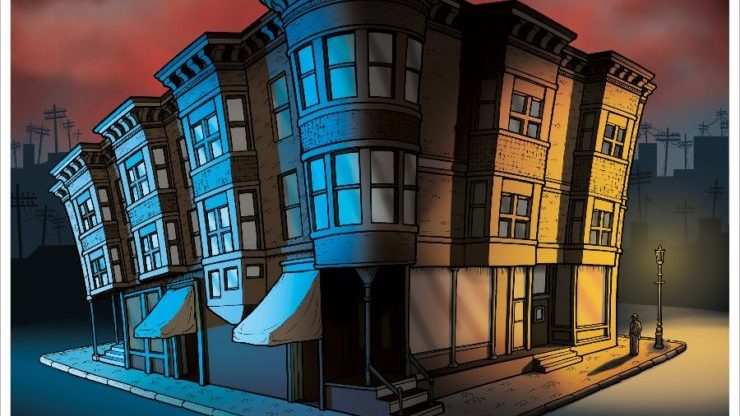 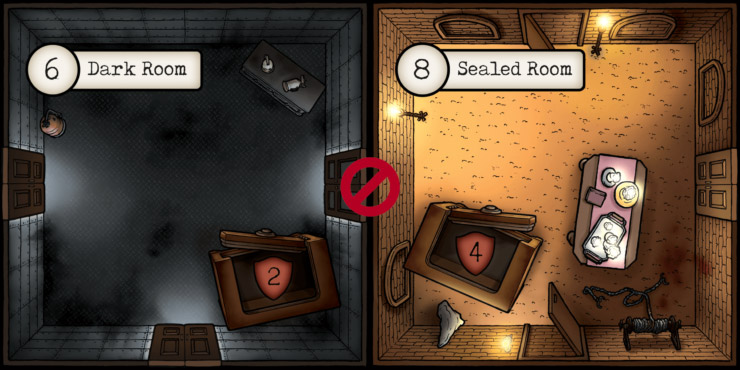