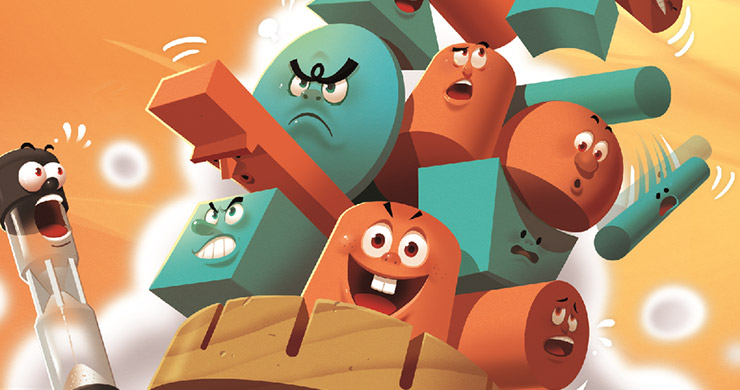 Pile-Up Rush is one of the latest of “Korea Board Games”. As you would expect the game contains high-quality components, all inside a very sturdy and beautifully illustrated package. It’s a real-time dexterity game, as you play your turns against a sand timer, for two teams.

The game comes with 20 wooden block pieces -a set of 10 for each team-, an hourglass that will be used to make you anxious and sweaty, and finally, one double-sided wooden ring that is used as a base. The whole game is revolved around this base, as you try to stack wooden pieces on that, making a tower of balance. The ring has an easy and a difficult side which you choose before each play.

To start the game, split up into two teams, get the blocks of your color in front of you, place the ring and the hourglass at the center of the play area and you are ready to go!

Goal
The goal of the game is to be the first team to gain 4 Victory Points! The game plays in rounds because in each round there is only one winner, which can win up to 2 points. So, you continue playing in rounds until a player gets a sum of 4 points. I will let you know how you score after you know how the game plays, so read on.

A Turn
During your turn, you can play (place them on the stack) as many blocks as you like within the time limit, as the sand timer is running. You have to place at least one piece and when you feel ready just flip the hourglass and the opposite player’s/team’s turn starts. The fastest you play on your turn the less time your opponent(s) will have on their own. This is vital as if the time runs out on your turn, you lose the round, so you can really push your rival with time.
There are some basic placement rules in the game:
You can place only one block at a time, using only one of your hands.
You aren`t allowed to touch blocks already in play but you can move them using the piece of the block you play.
Players on the same team play simultaneously and you can`t turn the hourglass if there is a teammate with a block on their hand.

Only the first turn of each round is different because you can only place up to three pieces and can`t turn the hourglass too fast, there is a line on the timer that depicts when you can turn it over. The reason behind that is to give some solid time for the game to start instead of going for a rushed turn.

End of a Round & Scoring
There are three possible ways for you to win a round and each one will score you points:
If the opposing team causes one or more blocks to fall out of the ring you win the round and score 1VP.
If the opposing team fails to flip the hourglass before time runs out, you win and score 1 VP.
If you successfully place all of your available blocks onto the ring, you win the round and 2VP.
For each VP you score, choose and get one of the opposing team’s blocks. These blocks are used to keep track of your victory points and can`t be used again in the game. This means you can strategically take away a piece from your opponent that you find easy to be placed or think it will give you trouble when used. On the flip side, your opponent(s) will have less available pieces and thus will be easier to place them all onto the ring to score points.

Lastly, the game comes with three possible variants but also recommends to create your own unique rules and have fun! The first one lets you play with both hands, this is used either when playing with an odd number of players or to make it easier (kids). The second is to place your pieces in a line and to be able to get only pieces from the edges – for a more challenging play. The last one is to share a team’s blocks among their players so each player can only place their own pieces. 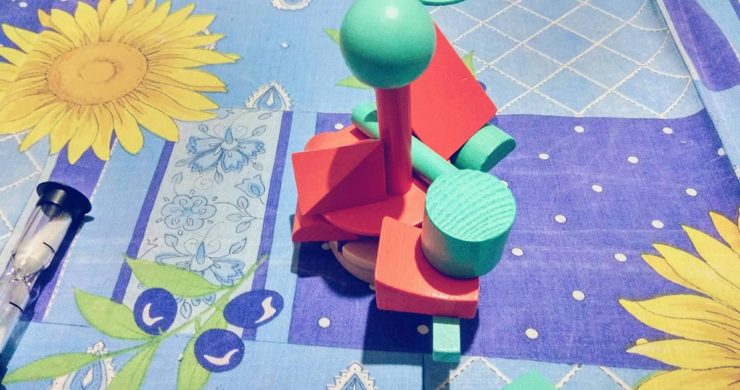 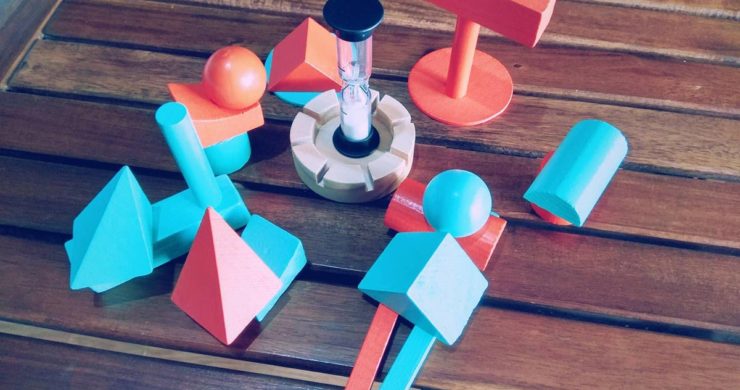 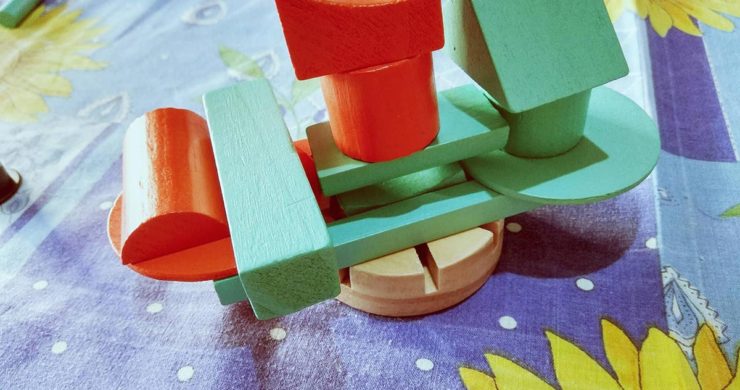 I’ll start with that I enjoy this game a lot, as it makes me laugh a lot when it gets risky, it is fast-paced, tense and doesn`t take a lot of time. It’s a pretty safe choice as it’s not anything new as a concept, so if you like balancing stacking games, you will like that one too.
The only part I didn`t like is the “Teams” aspect of the game. For me, it’s essentially a two-player game because this simultaneous concept doesn`t work. When it’s your teams turn you want to just play, so it feels like sharing your one player side with another person, something you may do when you are too many people for a game only. But there are a few options on that work, like the last variant in which at least you have a team rule of each placing out of their own pieces but the one that works best for me is to just play in turns. I won`t play it again even with these rules because it’s not so enjoyable with more than two anyway.
The shapes provided are very interesting and the easy and hard sides are effectively what they say. Even it should be normal and hard as they are only two! The fact that you gain a block as VP is also an interesting concept, adding some choices, but overall is a straightforward game. Perfect to use as an introductory to both dexterity and generally tabletop games.
A solid dexterity game with beautiful pieces which I can recommend for fans of the genre and light games!

This game is fun, light and quick but will need your focus, like 100%. When I try to place the pieces, especially after a couple of turns, I hold my breath in each placement, trying my best!
That means it is a filler game, yes, it doesn`t require so much brain power or time commitment but it sure needs your attention and energy so you can play it properly, respect your opponent(s) and have fun out of it! It’s always interesting to try new crazy combinations or go for a placement that almost defies the laws of physics.
Of course, as mentioned, try to play it with kids or elder people, they will love it!