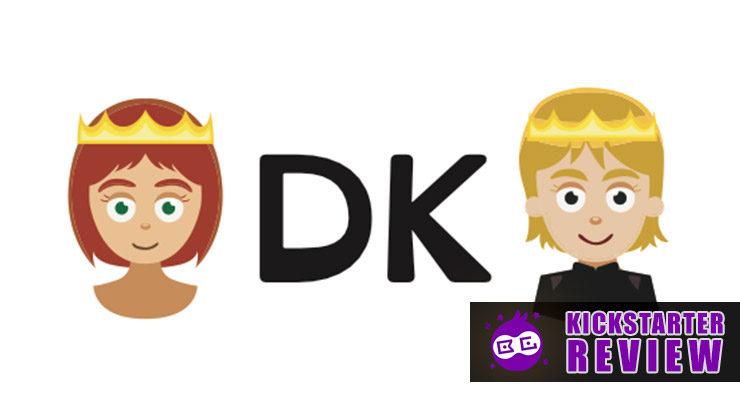 Set-Up Ease: Just shuffle the deck and deal 12 cards to each player!5 / 5 Gameplay Ease: Very easy to learn and play, especially for people familiar with the trick-taking genre. 4.8 / 5 Replay Value: Adding new rules and having a random team each game helps it to remain fresh on each round. 2.5 / 5 Thematic: Cute and cartoony art which is great for kids! 1 / 5

Doublehead Kids is a small trick-taking card game, designed and published by Joerg Trojan. This is a new take on the highly popular (in Germany) card game, Doppelkopf!

With kid-friendly aesthetics, this 4-player game is currently running on Kickstarter, where it’s already funded! As a fan of the genre, I got an early copy of the game to test it out and share my thoughts 🙂

Doublehead takes its name from the fact that each card exists twice in the game. Thus, we have a 48-card deck, with 24 unique cards. The “Kids” comes after the theme and family-friendly graphic design of the game, which is vibrant and cute!

Doublehead is a strictly 4-player game that can be expanded up to 6 players with the corresponding expansion. A classic trick-taking card game at its core, with an interesting twist on top!
In the game, the kingdom’s families will contest in a series of fierce card battles.

The game plays over a series of rounds, with 12 battles each (commonly referred to as tricks), where two randomly determined teams compete. Thus, you will be changing teams, each round. Here comes the twist… you will only learn who your teammate is during the round, while you are playing!

Even though you are on a team, each round, there will only be one winner at the end. Each time a team wins, its members will score a certain amount of Golden Coins. These are the Victory Points of the game, and having 5 (or 10 in an experienced game) will make you the winner!

On a card, you will find its family crest, power value, the number of Silver Coins it offers, and possibly a Golden Coin symbol (experienced mode).

The Royal family is the trump type of the game. Trump means that it’s stronger than the other types(families) when compared. 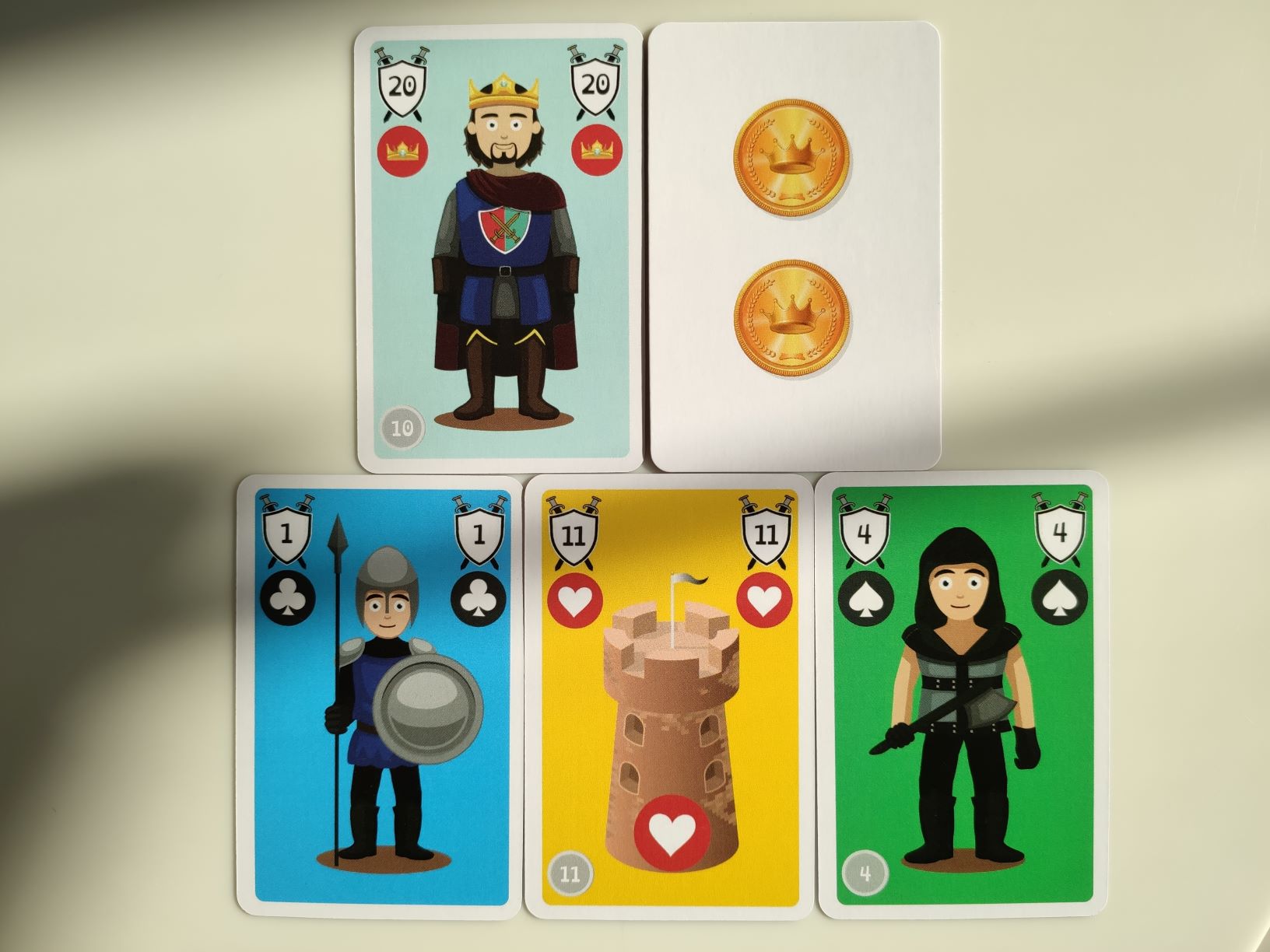 There are also three special cards included in the game:

To start the game, you simply deal 12 cards to each player, and you are set to go!

In case you have both “Team” cards in hand, you can either call a “Marriage”, or keep it a secret. Calling a “Marriage” means letting everyone know that you have both cards and choosing another player as your teammate. Keeping it a secret is a unique game state, where you create a team on your own. You will compete again a 3-player team and you will score double or even triple points in case you win that battle! A high risk – high reward option.

The flow of a Battle

A round consists of 12 Battles, where 1 card will be played by each player on each Battle.

At the end of a Battle, the highest Royal card wins the trick or the highest leading card in case there is no Royal card in play. The winner will score all 4 cards played, placing them face-down near them and will be the active player for the next Battle.

End of a Round & Scoring

After the 12th Battle, both teams count their total Silver Coins. There are 240 Silver Coins in total in the game, thus, the team with at least 121 Silver Coins wins the round! The winning team’s members score 1 Golden Coin each.

The basic game ends when a player has a total of 5 or more Golden Coins (10+ in the experienced game).
You can also use some popular variations to add some extra complexity to the game, here.

If you are in a mood for a casual card game, which is easy to learn and play while being quite tactical, this might be the one for you! There are not many games out there that strictly play in teams, and that’s always a fun aspect. This element lets you bluff, be cutthroat and cooperate, at the same time! That’s the case as you try to find your teammate during the first battles of the game, creating some interesting decisions and situations.

As in other trick-taking games, it’s a game where you can also chat while playing, that’s an aspect I do love in small card games. They let me get social while having a fun time and taking meaningful decisions, hitting that sweet spot of a filler game.

If you already enjoy trick-taking games and card games, like Tichu, or Linko, this is another solid choice for you. I was playing Tichu for a long time, and that’s the one closer to this one from my experience. Doublehead kids’ secret teams twist is enough to differentiate it from other similar games, a tense gameplay aspect. As the name implies, the game is easy enough to be played by young ages. Thanks to that, it’s much simpler in terms of complexity than Tichu or Tournament at Camelot.

If you are up for a light card game, which can be played in multiple places as well, as it’s only 48 cards, this might be a game for you.

At the time of this review, the game is live & funded on Kickstarter! One deck of Doublehead Kids can be bought for as low as 10€ and the 6-player expansion (+29 cards) is available on the Deluxe Edition pledge. The campaign is as straightforward as the game, and a visit will let you know whether you want to support the game or not.
I think that this is a great game for kids, as it will help them in mathematics, collaboration and decision making. The fact that they will have different teammates each round brings a new challenge to their communication and collaboration skills! 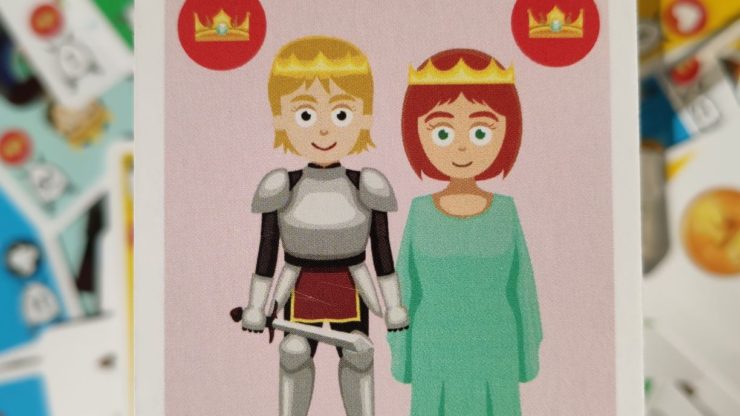 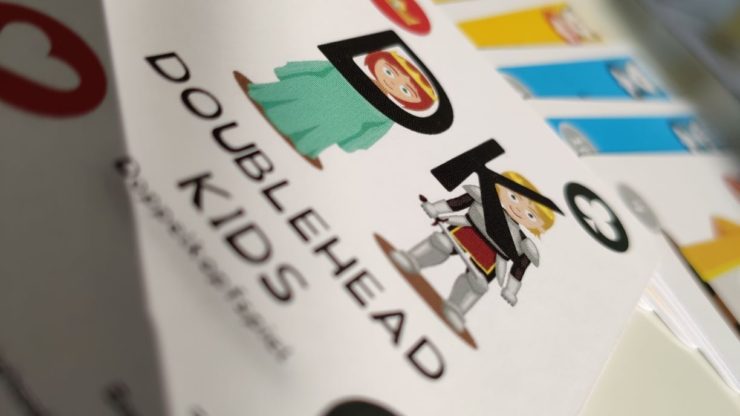 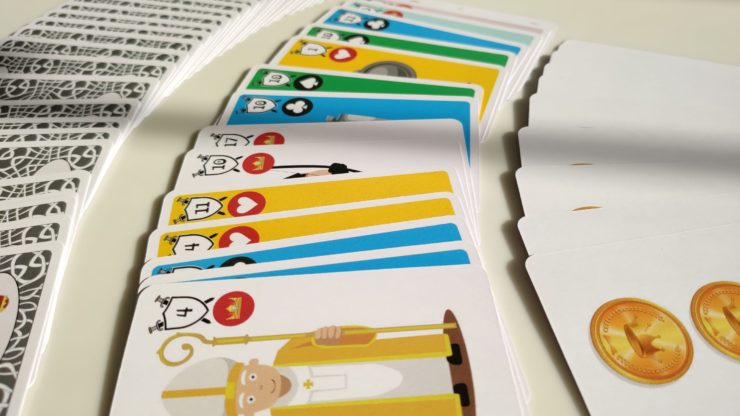