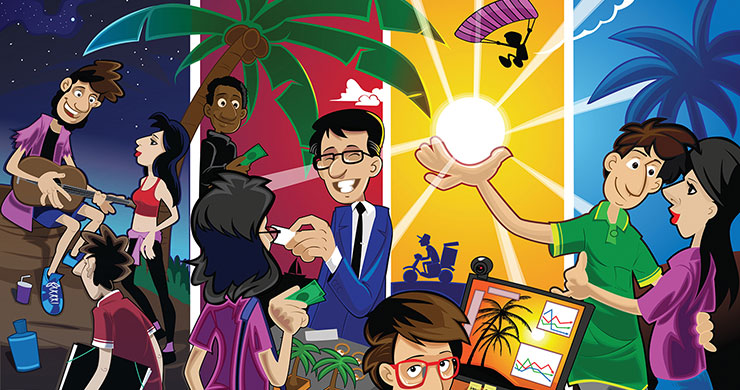 The Pursuit of Happiness

I guess you have probably played Life in your awkward youth, right? If you haven’t, it’s not a problem, because you can make it up by playing The Pursuit of Happiness, a cool worker placement game by Stronghold Games and Artipia Games. This particular title has been on my list ever since I laid my eyes on the cover and found out what it was all about. I could describe it as a heavy game, since there’s a lot of thinking involved and important decisions to make. Other than that, it’s a very fun game; there are no wars, no weapons and no zombies. The ‘take that’ attitude is non-existent, so it’s even suitable for kids. At the end, of course, you die. In The Pursuit of Happiness you and your friends start out as teens and try to spend your time on this planet wisely in order to pursue the most happiness. Each one of you has a unique child trait which will allow them to have something extra throughout their lives. The game is played in rounds, each one representing one phase in life. The three last rounds cover the Old Age, which not all players will get to see. Yes, it seems that some of them were so stressed in their adult lives that they forgot to have some fun every once in a while and reduce their stress levels. Not all is bad, though. Through the course of the game you can play, interact, study, shop, flirt, take on individual or group projects and earn some valuable resources and short-term happiness. This is reset at the start of the next round, but if you are very happy at a particular round, then you are the first player to start the next one. Yay, you. Also, you can get a job so you can have more dough to spend. You’ll need it if you ever decide to upgrade your pony to a unicorn. However, if you are unable to pay the upkeep costs, you will be fired. The Kickstarter promo pack has added a lot more things to do in your game. In the Items deck you will now find a few furry friends you can buy as pets, but be ready to say goodbye sooner that you would’ve hoped. There are Event cards which can modify some rules that will either benefit you or make your life harder. If you follow the current Trends, then you’ll get more long-term happiness points (a.k.a. victory points) and be more likely to win. Why you should play

Even though the game is heavy and takes a long time to finish, many non-gamers will find it easy enough to play. The worker-placement mechanism doesn’t even seem like an issue when they have so many interesting choices to make. Also, the artwork is so playful that no one will have a sour mood while playing. A nice detail of the game is that the rules suggest that each player should narrate their lives after the end of the game. Players get to recall the highlights by looking back at their item cards, their projects or even some long-forgotten summer flings. Ah, the memories…

Why you shouldn’t play

After a few plays, you might realize that in order to win, you have to give up on some things that you’d like to do. The reason is that players have some common life goals which determine the victory parameters every time. One time you might be fighting over a good spouse, but others you might be chasing after projects or professions. If you are a tactical person, you might get bored of the game easily, but this will take some time to happen, due to the great variety of the cards. I was born in the previous century, during a time when the hottest board game was Monopoly. Because of that, I stayed in the dark for too many years, until I discovered modern board games. It was the dawn of a new era for me, and there’s no turning back. I am an English teacher and translator and I divide my free time between trying to initiate my friends into new board games and pursuing my other passions, whose striking disparity establishes me as a Jack of all trades, or a completely unstable individual. You can never be sure, so tread lightly just in case.

Latest posts by MariaNerd (see all)