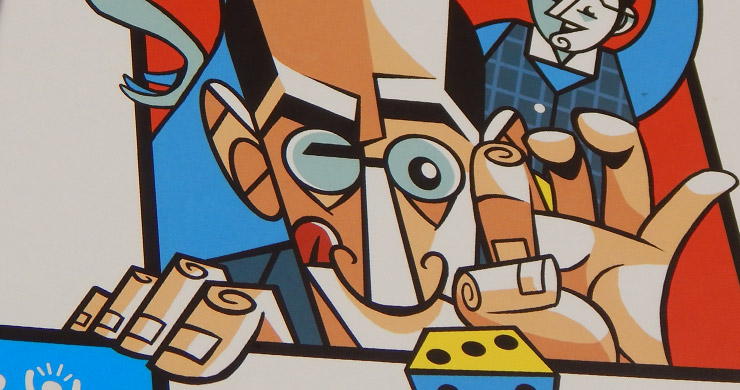 Set-Up Ease: Creating art has never been this simple5 / 5 Gameplay Ease: Eye-hand coordination can be tough sometimes 4 / 5 Replay Value: You might feel you have had enough after a few plays 2 / 5 Thematic: The components were taken right from a painter’s studio 4 / 5
Overall Rating: A nice filler game 6 / 10 Essen Spiel 2016 has brought to us a lot of games varying widely in complexity. One of the “easy” ones is Mondrian. Inspired from the work of Pieter Cornelis Mondrian, this game calls players to complete a painting that will resemble those made by the famous Dutch abstract painter. Of course, no one is required to actually paint anything, but the basic components of the game will put you in the right mood. Your player’s kit comes with a palette and a brush, which immediately makes you feel more artistic. Wearing a beret is optional, of course. Depending on the number of players, you will set up the canvas tiles on the table, creating a modular board with black, white and the three primary colors, on which dice will be rolled. The way you roll your die each time depends on the choice you have made beforehand. Starting with one die in round one, you roll an additional die in every round, up to a total of five. You can roll with either right or left hand and with your eyes closed. You can also flick the die onto the board or drop it from a distance equal to the aforementioned paintbrush. The order you roll (or drop or flick) the die is important. If I were you, I would save the strongest moves for later in the round, so I would be able to knock another player’s die off from the board. Apart from this in-your-face attitude, your basic goal is to land on a high-number tile preferably having rolled an equally high number, so you can claim the tile. If the value of your die is smaller than the number of the tile, then you can use one of your three blank tiles and add their number to your die value. After the fifth round is over, players discard some tiles face-down so they have as many tiles as the player with the fewest tiles. It seems fair, but remember that the former has an edge over the rest. Also, there are bonus points for the player who has the most tiles with a specific color (8 points for blue, 10 for yellow, 12 for red and 14 for black), so if you were paying attention, you might ‘bet’ on the color that will bring you more points.

It’s an easy and fun filler game that does not require particular planning before every move. It only takes a little dexterity when you roll, which sometimes will not even be an issue, given the random nature of dice rolling in general. The game can make you laugh, and it might even inspire you to create a work of art yourself. You never know.

Why you should not play it

Maybe the subject matter is not to your liking? I get it, randomness is usually frowned upon by seasoned gamers. The lack of strategy, especially, could be a deal-breaker for many. However, you could play this game with young people or novices who are not so familiar with modern board games. One thing is sure, you will all find it quite relaxing and entertaining. And you can play something more demanding afterwards.