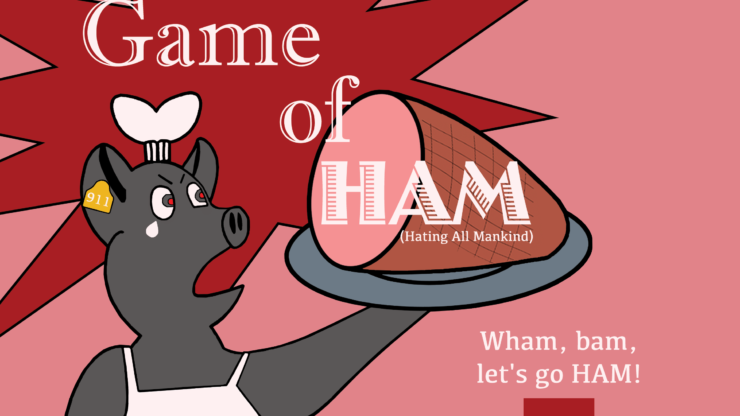 Carving Into “Game of HAM”

Set-Up Ease: A lot of card shuffling, but there are few ways to set this game up "wrong". Game of HAM fully endorses rule modularity4.5 / 5 Gameplay Ease: Going solely by the core, mandatory rules, there is a slight learning curve. While steep for a party game, the rules are fairly light overall 4 / 5 Replay Value: Party games rely on replay value. This one adds variants of play and modularity and that's before you get to expansions. 5 / 5 Thematic: Theme is a little difficult for games such as this one. There's no one, central theme, and the titular "HAM" only comes into play for tokens. 3 / 5
Overall Rating: Game of HAM is a unique twist on an existing theme, and could easily make a good "go to" game in almost any shelf. 8.25 / 10

Game of HAM (HAM being an anagram for “Hating All Mankind”) is a party game developed independently. Players use a hand of cards to respond to prompts and otherwise jockey their way to the finish on a central board. The game features multiple variants of play, including a platform for players to create their own content, so the review below will address the core rules.

When setting up Game of HAM for play, there are a few components.  First, the game board needs to be set up.  It is comprised of four reversible panels, which players can arrange in any format that they desire, so long as there is at least one path that can be followed from the starting position to the finish position. Players do not have to make the edges of the board line up neatly as long as this rule is followed.  Next the cards are shuffled into their stacks. Grey cards are prompts for the players, pink cards are the responses to grey cards, and then multiple piles of cards with white backs separated by different color faces based on which colors the spaces on the board share. The color cards all having white backs is mitigated by large ham tokens of the appropriate color for the decks to be on.

Every round in traditional play starts with a “trick”. A trick is when the judge for the round draw a grey card and prompts the players, who then select an appropriate number of pink cards from their hand to answer it. The judge selects a winner from the responses and gives the grey card to the player. The winning player selects one of the two numbers at the bottom of the card and moves exactly that many spaces. If their token lands on another player’s, that player gets bumped back to the last white space they passed if they are not already on it. Should the player resolve in a colored space at this point, they draw a card from that stack for their hand.  If it has a number, they move that many spaces but do not get the resulting space’s card if it is a color. The winning player keeps the grey card, and becomes the judge for the next “trick”. During the round, color cards may be used at any time other than when the player using it is being knocked back. However, a player with a complete set of HAM grey cards may cancel selective parts of a color card being played. 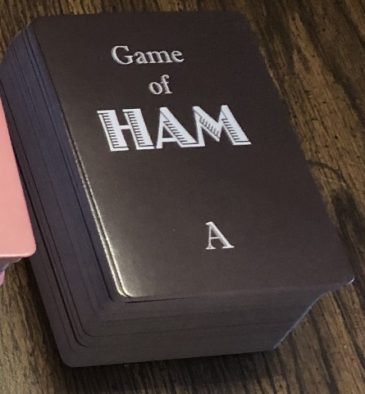 Win the right tricks not only to advance on the board, but to get a “HAM” combo

The first player to reach the final space exactly wins. If their movement overshoots, they move away from the final space in any one direction a number of spaces equal to the remaining movement.

Despite adding more moving parts to an existing type of game, the fact of the matter is that these are simpler elements, and the game is designed to work with or without them as desired. It still falls into the expected “ease of play” for a party game. Players can learn on the fly rather seamlessly, and since the chaos element is in the round’s judge, a lot of strategy remains in player hands. While this is on a personal preference and not a reflection on the game itself, the box is rather compact (it can fit in your average duffel bag), and still has a little extra space for expansion.

One standout quality is that the cards deal smoothly, even fresh out of the box. As a final note, the pink cards that players use to answer the prompt have flavor text which can offer players some insight in how to play their cards.

Where the tokens and game board are sturdy, the cards themselves feel a little thin. This could possibly be attributed to the fact they aren’t as stiff as expected when not fully broken in, but there is a noticeable difference however slight. Attempts to simulate casual damage or feel for easy tears did not turn up negative results. As another component drawback, the player tokens are roughly the size of a dime. So despite being robust, they are easy to lose. A minimal difference since really anything can be a token. The last critique on the tokens is that the color deck markers could use a slight redesign. Either the color decks cover the marker so much that not all players can see it, or these four decks now take up double the space. Once more, this falls more under being a discerning player than an actual drawback to play. 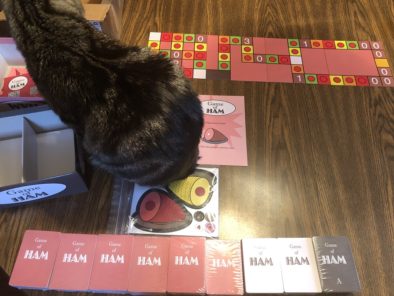 In this side by side of the unboxing, the token sizing is apparent.

Concluding the section on components, this game is not very kind to colorblind players which is the most impactful issue facing this game’s pieces and layout. 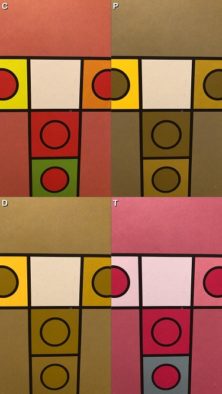 The top left quarter of the image is a portion of of the game board in lamp light.

When looking at potential pitfalls of gameplay there’s the obvious drawback to modularity in the form of ideological differences. Which rules should(n’t) be included, disputes over strategies if a player ‘would have known that sooner’, etc. Party games tend to be fast and loose in this regard, however it is a factor to consider when bringing the game out. The biggest roadblock, however is the same one that comes to most games with a “trick” mechanic similar to this game is that card selection can become limited, especially with games hosting many players. Until players pad their collections with more expansions, or somehow produce their own cards that can blend in, cards will likely have to be recycled to finish the game.

Game of HAM’s strongest points are in the theoretical: Interchangeable rules with multiple modes of play, accessible content, and a good strategy to luck ratio. Holding it back in its current state, are problematically sized components, a difficult color palette, and that the starting decks may have been trimmed back too much.

It scores neutral on the cat hazard scale, because the worst thing that can really happen to the game is if tokens get knocked about, but if card stacks get knocked over then it just helps the players shuffle a random pile. 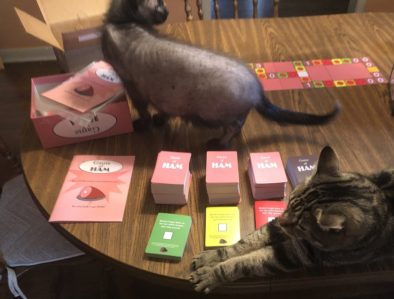 Images above are from the unboxing process. Needless to say the cat traps were effective.

But is it fun? Certainly. Party games are designed around the fun factor first. Provided it’s a decent group of people, Game of HAM should always add some levity to a setting. Not only that, but the game was created with the intention of improving upon some of the shortcomings of popular mechanics and does so without creating complications fairly seamlessly.

*Note: A copy of Game of HAM was provided for playtest purposes, and this reviewer does not otherwise benefit from the game.
*Additional: Due to Social Distancing measures, the above review for Game of HAM was done “cold”.  This means the rules and cards were reviewed multiple times, and compared to other similar reviewer experiences compared, as well as a solo setup and play simulation.