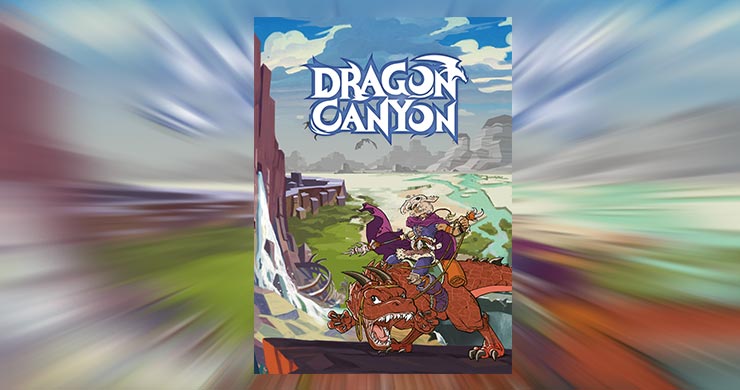 Dragon Canyon is already live and funded on Kickstarter by Sweet Lemon Publishing, another interesting game from the publisher, challenging standards.
Please note that the campaign made the Solo mode for the game a reality, something that wasn`t available in my copy of the game. This mode adds a deck of AI cards so you can play versus a challenging artificial side. In addition, some stretch goals were unlocked, adding some extra content to the game. 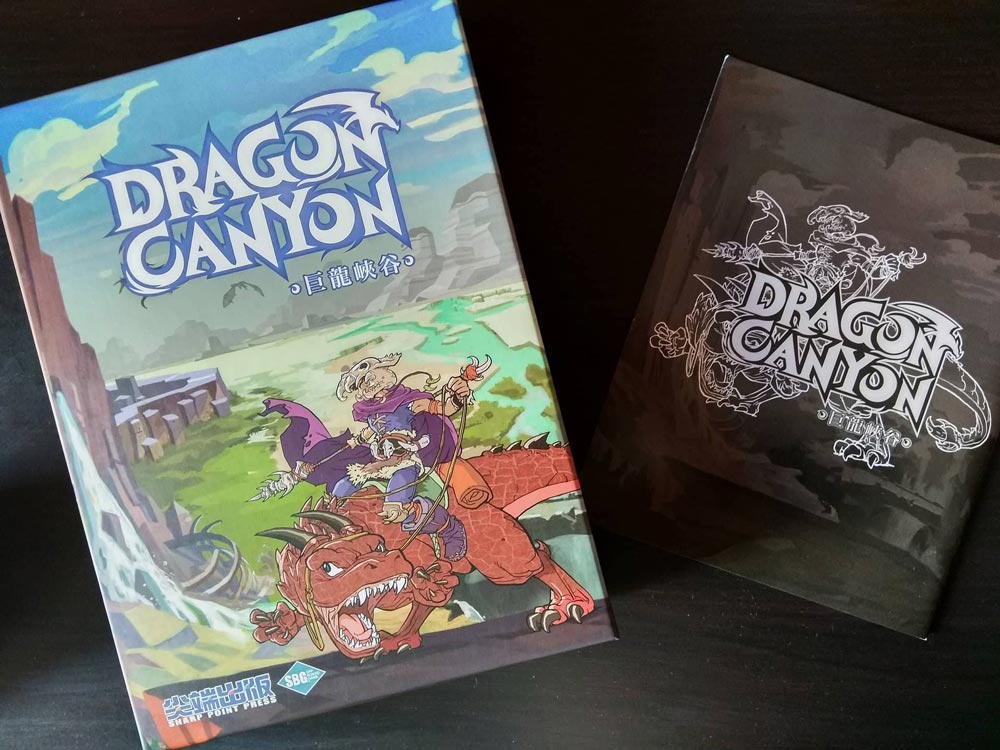 Theme
You are a tribal king, leading a mighty army to build a thriving kingdom. In that world, humans and dinosaurs coexisted for millennia but the case is not that easy with the other tribes. You have to struggle for resources and sometimes fight along the way but these will form the pillars of your civilization, sturdy and mighty constructions. Outwit your opponents or learn to co-exist with them. 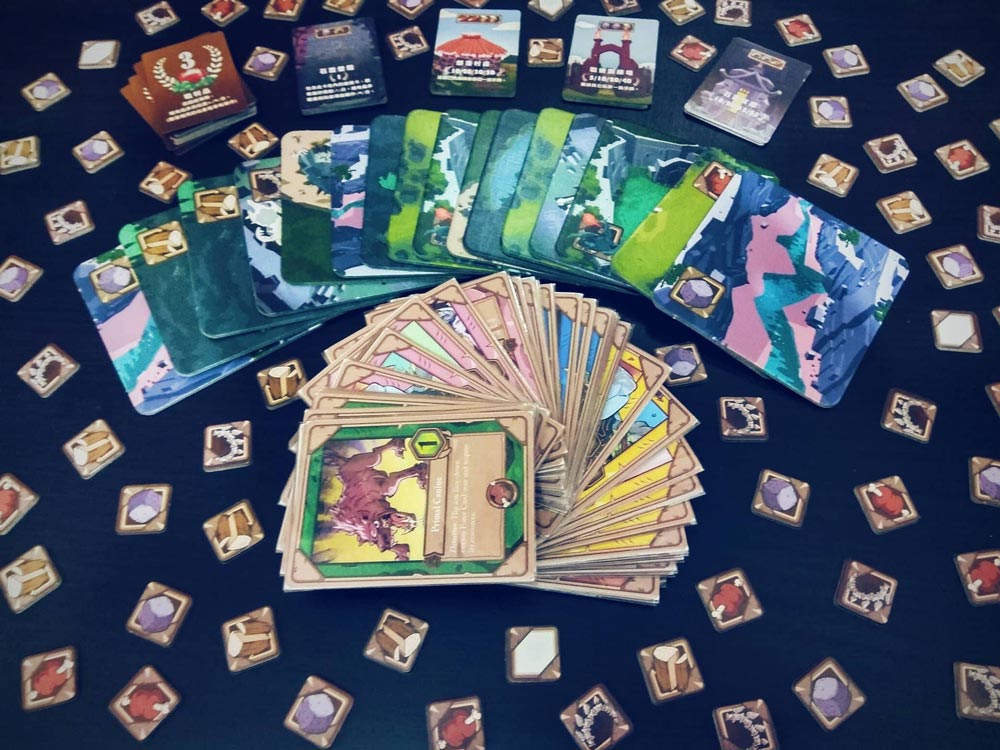 Goal
In Dragon Canyon, you essentially try to be the clan with the most points at the end of the game. Points are granted by various constructions/buildings and by war trophies, gained after a victorious fight!

Game Flow
The whole game has simultaneously a familiar and strange flow and structure. To start the game, you have to randomly create the 4×4 board with the 16 available tiles. We start with a nice replay value aspect, having a different board layout on each game. Each tile has beautiful art and the majority of them depict a type of resource out of the four available ones on the game. Then we have two other types, each with a unique ability that we will get into later.
We have our board ready, our resource pool and structures nearby and each player gets an identical set of 7 Hero cards and a personal board. Your board has a place for your discard pile, your Caravan, and Stockpile. In the Caravan are placed all resources you will acquire during your turn and at the first phase of your turn which is named:

“1. Stockpile”, all your resources left on your Caravan will be placed on your Stockpile are where they will lie in safety.
Your turn consists of 5 different phases, so let’s check out the rest:

2. Journey – On that phase, you simply pick one of your Heroes cards and place it face-down on a tile.

3. Adventure – Here is where the choices come. You have to decide among three scenarios, to leave your just played card face-down, to flip it face-up and activate its unique ability or flip it face-up and initiate a battle against an adjacent enemy Hero.
I want to leave it face-down! -> Perfect, you will gain the resource depicted on that tile at the next phase.
I want to execute its awesome ability! -> Great choice, this is probably the right time to do so, making the most out of this Hero’s effect. We will see all abilities in detail later.
I want to annihilate my enemies! -> That’s my tribal king! All Heroes have a number that shows how powerful they are in battle. When a fight starts, both players roll a six-sided die and add their result to their Hero’s power value. The most powerful character wins and in case of a tie, the attacker always wins for their bold move!
If you win in a fight you immediately gain the resource depicted on the defeated Hero’s card, yeah, every Hero also shows a certain resource on them. In case you are the attacker here is where the best loot lies, in addition of getting the resource you steal a resource from the losing player’s Caravan space and gain a Loot card, worthy of 3 Victory Points.

4. Harvest – You gain the resource depicted on each tile on which you have a face-down card. But before that, a special Festival may occur! What is that I hear you ask, this is a special occasion, where four cards are lined up horizontally, diagonally or vertically. If that happens, all cards are discarded but their owners will gain both that cards and it tile’s resource.

5. Claim – Now you are ready to create your buildings by spending the right amount of resources from your Stockpile. 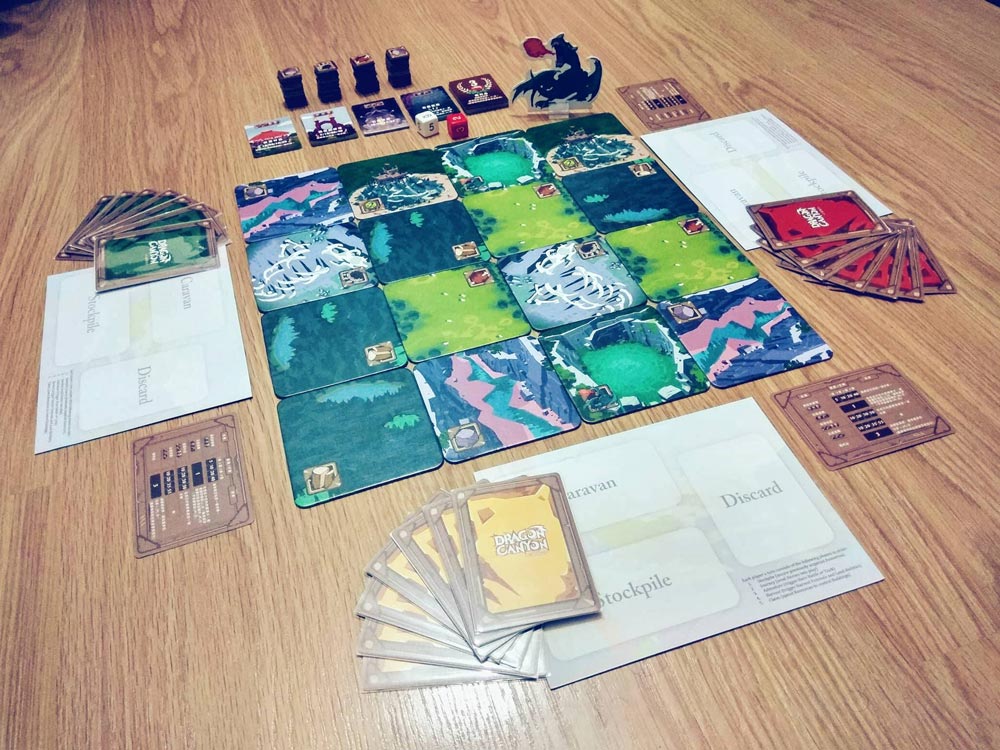 There are four available types of buildings in the game, with different costs, three of them giving you victory points according to how many of that type you have at the end of the game. The last one is worth one point for each building you have, so that can be very valuable if you can get many cheap ones. Lastly, two of these buildings have a special effect that takes place as you buy them, one is to discard a card from an opponent and the other is to take back one of your cards from the discard pile. As mentioned, you also gain points from Trophies, acquired through winning fights when attacking but the mightiest tribe, the one with the most Trophies, will get a bonus of +10 points at the end of the game, so be brutal.

That is pretty much your turn. Anytime you have no cards in your hand just pick up your whole discard pile. We didn`t mention what the two different type tiles actually do. Both exist twice on the board and let’s start with the cool one which is no other than “Dragon Canyon”! When you place a Hero there you immediately take the mighty Dragon standee and place it on another Hero, stomping them. Then, you discard a card from that Hero’s owner’s hand and gain the resource depicted on the discarded Hero. Stomping another card means that the card will no longer Harvest, so its owner won`t get any resources on the Harvest Phase. A brutal move to do, but you just sent a Dragon there, what could we expect? The other tile is the Fortified Town which gives +2 strength/power to your Hero and you can exchange resources at a 2:1 ratio with the general pool, but only from your Stockpile. 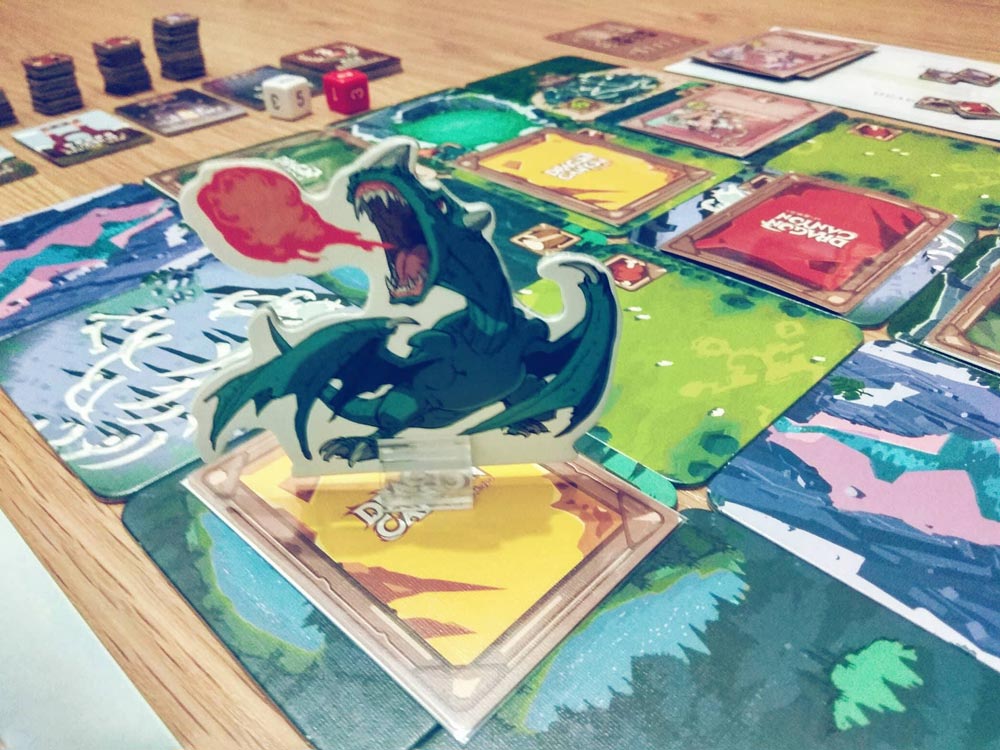 The whole game actually lies in your Heroes abilities and how you will manage them. So, let’s see what each one has to offer:

Ancient Wood Assassin – Power 2
His power becomes 10 if he fights against the Dragon Slayer. That’s a nice counter for the big guy when you know where to find him, almost a 100% victory.

Ancient Dragon Knight – Power 4
The +2 power-up from the Fortified Town doesn`t apply when fighting against this Hero. Having him near the Fortified Town, waiting to be attacked or attacking that tile can be very beneficial on the right timing.

Tribal Mage – Power 3
If you activate her she can change the placement of another card on the map. In addition, when she gets attacked she travels to an unoccupied tile instead, avoiding the fight. Both effects are very useful, the first one used for tactical placing on the map and the second as a trap to nullify an opponent’s attack while your Hero stays on Map.

Wyvern Archer – Power 4
But here comes the archer who counters the beautiful Tribal Mage. When he challenges her to a fight he negates her escape effect and also changes his power to 7, just for her. Again, an almost 100% victory.

Primal Canine – Power 1
That creature’s effect is to flip a face-down Hero card and gain that Hero’s resource type. This is being used to gain a resource type that is not available from the tiles but to also negate the target Hero’s Harvest Phase, as he is turned face-up. A good tip is to use this as the fourth card to initiate a Festival because if it stays on board it’s an easy prey as it has only 1 power.

Tribal Witch Doctor – Power 0
Lastly, we have the most powerless Hero, with her effect being, as a doctor, to let you take back all your discarded cards, instead of waiting to run out of cards.

Game End
The game ends when one (with 2-3 players) or two (with 4-5 players) building piles are depleted. Then, all players except the one that triggered the game end, take another turn. On that last turn, you can also use your resources in your Caravan to acquire buildings. The player with the most points is the winner! 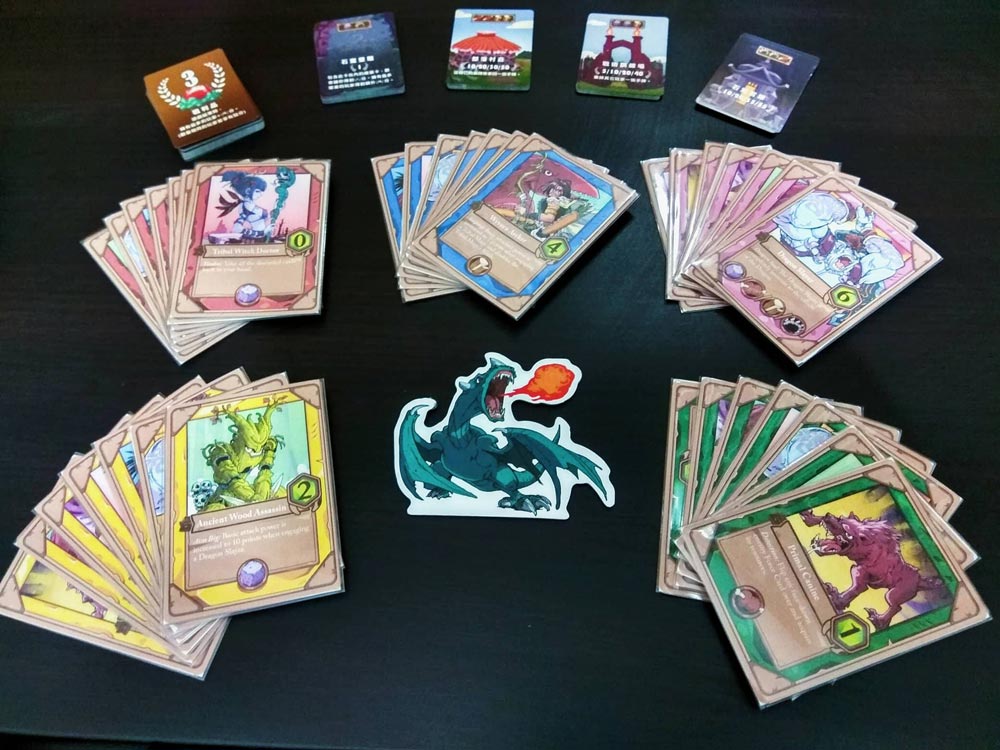 First of all, the aesthetics of the game are vibrant and makes me feel nice to play this game, even the theme isn`t so strong gameplay wise. I think that the art in the European print may differ from the one I played but all pieces of art in both versions look stunning. It feels like a bigger “Love Letter” style game, adding a board and so on. I have mixed feelings about that because its flaw felt natural but kind of weird at the same time, confusing players at certain points with no real reason, as the rules are quite easy to grasp.

Who is this game for?
Dragon Canyon blends in different mechanics so its possible to like some aspects but not be a fan of others.
Do you like to read your opponents’ movements? As the Heroes interact with each other you have to think and deduct your opponents’ moves and plays so you can make the most out of your choices.
Do you like memory? I personally like memory mechanics but I know that many don`t like it blend in their meatier games. You will have to remember cards as they get flipped during the game and with which cards other players are left in their hands.
Do you like resource management and tactical placement? Managing your resources and placing the right Hero at the right tile at the right moment will be crucial if you want to acquire the best mix of resources so you can buy a building. The map keeps changing, alternating your choices and possible spots for a good play which is a nice element, adapting on each round.
Do you like “take that” elements? It can almost feel personal at some points because it includes a lot of fights, discarding cards, threats with Dragons. But because these actions are part of the flow it doesn`t feel that mean.
There is some set collection there, as you try to also get the right set of resources to buy the right cards to make the most out of them. But tracking down what resources you will get, by battling or using the Canine’s effect, can be tricky as you have to remember what resource each Hero has, ending up gaining some resources almost randomly.

I wish that there were more different building cards, and have different or more abilities. The “take back one card” and the “discard an opponent’s card” are very underused, essentially giving away points for these abilities as these give you less than the one without. The quick flow of the game is a good aspect, making the game truly last as long as it is depicted on the box.
Overall is a game that I would like to play from time to time, feels unique in the way it plays and has some aspects I like but I would be concerned about its sustain power. Additional content would make me want to try different combinations and stuff, bringing it back to the table.

The game is fairly light and quick, even if it gives the feel of a meatier game as you finish, which is a good thing. You can play the game even in a light or a more competitive mood, meaning that you can track down in your mind everything and make maybe the best move or play more casually and see what happens. There is conflict between players so you have to keep that in mind. A light to medium weight game overall that will give you an interesting experience and stretch your mind in different ways.

CONS
“Take That” and memory mechanics.
Not many different buildings.
Some effects can feel unnecessary.