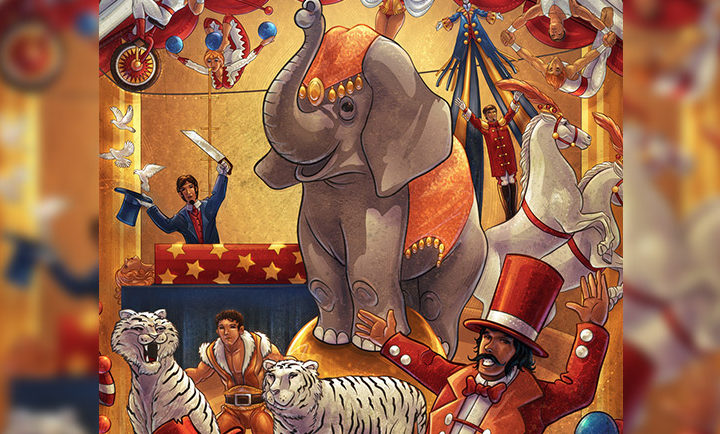 Set-Up Ease: You can’t set up a circus tent in an instant!4 / 5 Gameplay Ease: It takes planning, plotting and scheming to be the best 3 / 5 Replay Value: You won’t feel like you’ve played the same game twice 3 / 5 Thematic: You are surrounded by circus images, but that’s just about it 2 / 5
Overall Rating: The third show can make or break ya 6.5 / 10

I am rather new to the board gaming world, yet I can’t help noticing some types of games that have remained unknown to me for so very long. One such type is called worker-placement. For the uninitiated, players of these types of games assume the role of a businessperson, be it a restaurateur, a movie producer, a hotel manager ─you name it. Actually, worker-placement board games remind me of video games such as Sim City, Hotel Giant, Hotel Tycoon etc. Only they are board games, which means you can play them with your friends without the risk of carpal tunnel syndrome. The game I’m talking about is Drum Roll (by Greek designers Konstantinos Kokkinis and Dimitris Drakopoulos). The players are circus owners in the early 1900s, trying to set up their circus program in order to put up three, hopefully successful, shows in three different European cities. This entails finding the right performers, providing them with the appropriate costumes, rehearsal time and various props. Each of these essentials is represented by colored cubes, which are placed on each performer’s card, on top of three different spots, thus enabling them to put on a poor, good or outstanding performance respectively. Apart from the equipment, you are also in search of personnel, like agents, pop corn vendors, a band and so on. There is a special stack of cards, which help you bend some of the rules just to get your way. Hey, competition is tough. At the start of every turn, you get to claim your actions (0-3). But if you’ve been eyeing that juggler for too long, expecting him to drop his price, someone else might snatch him before you do, so act fast! Some actions have a first-come, first-serve basis. If you need a break from very antagonistic games or from dystopian, end-of-the-world type of games, this is just what you need. Its theme alone is guaranteed to make you smile, knowing that you are not actually at the circus and no animals are being mistreated during your game.

Do you always boast to your friends about your organizational and business skills? Time to prove it! Also, if you haven’t played worker-placement games before ─although I’m pretty sure I was the last one─ I think this is a good initiation to this world. If you are not familiar with worker-placement ─again, I doubt it─ the gameplay will seem rather sophisticated, but once you’ve played a couple of times and watched some videos, you’ll get the hang of it. Chances are, though, you might give up on it before that time comes. I am writing this now because I persevered and emerged victorious.

Are you restless to win fast and can’t plan ahead? I guess you won’t enjoy playing Drum Roll so much, given the fact that there are 5-7 rounds of preparation before each one of the three shows. If you can’t wait for the final outcome, I suggest you pick a more quick-paced game.