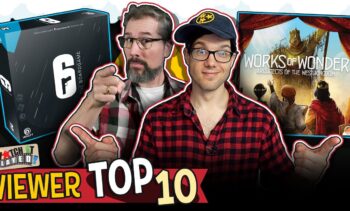 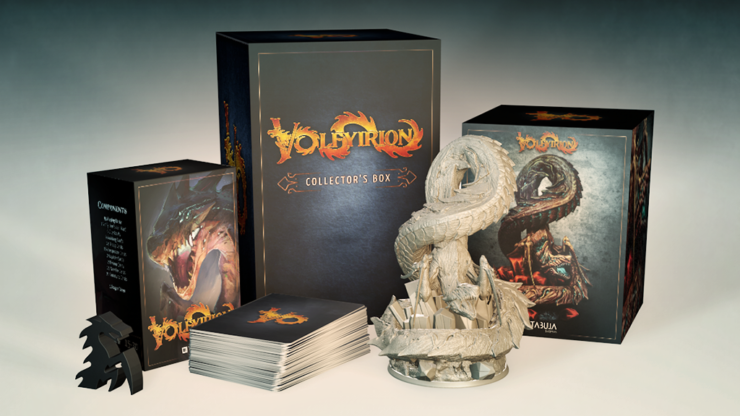 Set-Up Ease: As soon as you take out the cards you are almost ready to fight!4.5 / 5 Gameplay Ease: Straightforward and easy to learn how to dive into this battle between Houses! 4 / 5 Replay Value: Each battle needs its own tactics! 3.5 / 5 Thematic: Tense, tactical, brutal. This is war! 3.5 / 5

Volfyirion is Tabula Games‘ latest game set in the beautiful universe of Mysthea! It just launched on Kickstarter, making it their 4th successful campaign.

Please note that I played the game using prototype components and going through the basic competitive mode. Additional modules and content will be added according to the Stretch Goals reached in their Kickstarter campaign.

Volfyirion is a 1vs1 pure deck-building card game where your goal is to destroy your opponent’s cities. By reading the word “pure” other similar games will come to mind, as that was the case for me too, after reading the rules. Star Realms might be the most popular example but let me get ahead of you and put your mind at ease: Volfyirion manages to create its own unique experience while strictly using the beloved deck-building at its core.
For those who are not familiar with the term “deck-building”, I recommend reading through my explanation of the rules to get the grasp of it.

The world of Icaion is an immersive and rich one, shaken by mysterious forces and anomalies. Reflected on a beautiful graphic novel which will let you take a taste of it.
The game goes through the story known as “The War for Volfyirion” where the bottom line is you get to fight over controlling Volfyirion. Does it seem like a beast that can be tamed? Definitely not, but you are one of the two ruling Houses, Volarees and Rorius. With that said, you may have the power needed to take this dreadful dragon under your control. An invaluable asset to the war between the Houses.

Let’s take a look at how the game actually plays. 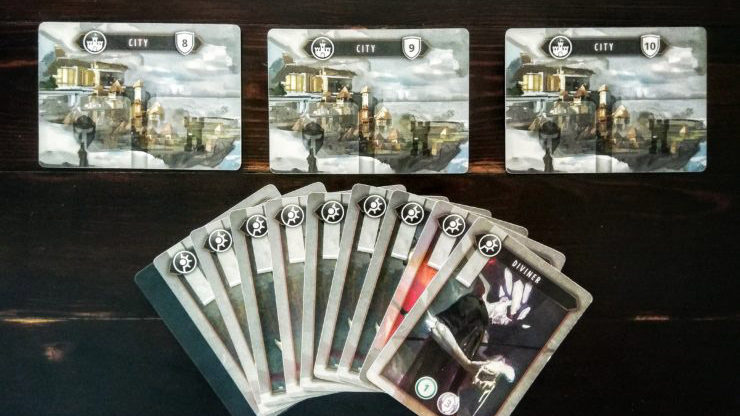 Each player will start the game with an identical 10-card deck and three face-up City cards. In the middle of the table, there will always be five cards from the common deck, forming a pool.
This deck contains Troop, Building, and Command cards which I’ll explain later. Then, we have the Volfyirion’s Lair card where Volfyirion’s miniature is placed along with two face-up Wonder cards from the respective deck. 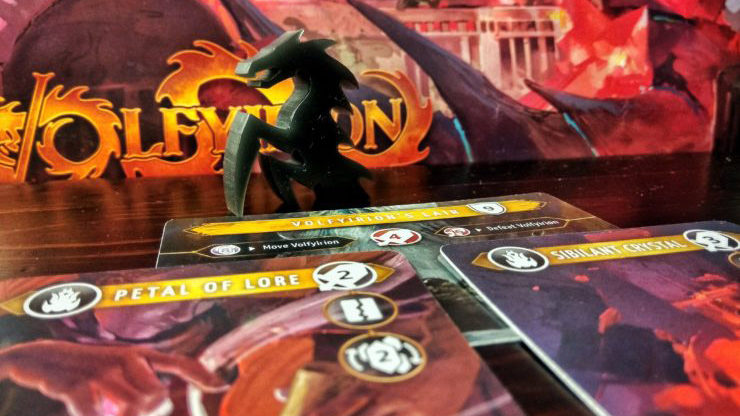 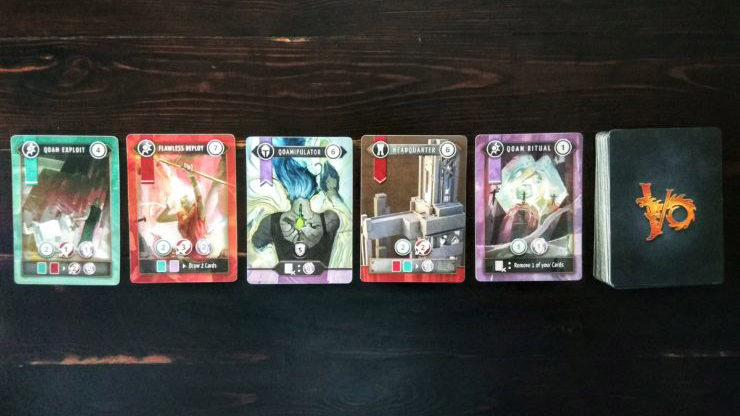 The whole game revolves around three type of points, gained by activating your cards. Let’s take a look at each of them:

There are four types of cards in the game, each with its own unique element but all with a main and secondary ability. All cards are using their main abilities but the secondary ones require fulfilling a condition. I can either be discarding the card out of play or having a set of cards in certain colors in your play area.
Now, let me explain you the cards: 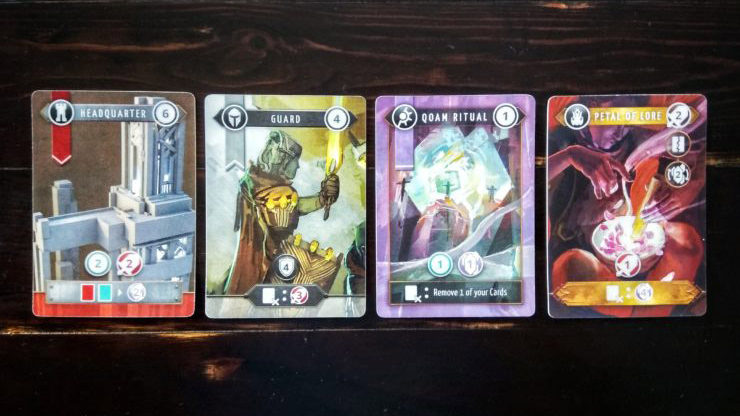 During your turn, you get to essentially play all your 5-card hand in your play area. That’s the case because whether you play your cards or not they get discarded at the end of your turn. All basic effects grand you a number of points for you to spend in ways previously mentioned.  Such effects can be also used from your cards that are already in play from previous turns, such as Buildings and Wonders. Secondary effects are always a choice and can be activated, if possible, in any order you wish.

As soon as you finish taking actions and want to end your turn you discard all cards in your play area, except any Buildings and Troops on Cities and any Wonder cards. Lastly, you get to draw 5 cards from your deck. This last step is what makes a deck-building game because if you run out of cards on your deck you get to shuffle your discard pile and create a new deck. This means that cards purchased during your previous turns will be eventually be drawn and used!

The game immediately ends when a player’s last City is destroyed, losing the game.

As in most games of that type, I tend to like a lot how fast they play. The rules are straightforward and an aspect I wasn`t expecting was how tactical it is.

A game of Volfyirion can end in a blink of an eye with you still wondering how that’s possible. It’s tight and tense, taking one or two games to realize how everything works together. As in this game you have to play with ALL its aspects. A back-n-forth battle where you have to use all tools at your disposal. All card and point types can be equally important and it has a lot to do with how your opponent plays. So, my tip to you: adjust to your opponent and use what they lack to your favor. This is the way of prevailing!

I would definitely like to see more cards in the game, as I`m always going for high replay value in these games. With Tabula Games behind the project, I’m sure that it will be the case, as they already have extra modes for the game. Having a publisher supporting their game is always a big plus.

Fun fact: I’m still undefeated in this game, with more than 10 plays already!

It is tense and brain teasing. Even though it’s not complicated you have to pay attention. You are getting into a battle and even though it uses deck-building you have to be ready to play at a different pace. You are not going for the long-term game here or for a specific strategy, following card synergies. Get ready to adjust, be aggressive and sacrifice a big portion of your cards.

Everyone who wants a fast-paced tactical experience. It manages to feel like an intense battle with each choice being of a great importance. Thus, managing your resources is a vital aspect of the game. The rules are easy so even a casual or non-gamer can dive in and enjoy the game. Basing all its effects in symbols makes it accessible to everyone, with an extremely small portion of text in general.

If you hate deck-building games that might not be the game for you, even though it goes for the short-term game.

The game has a special Kickstarter price at 9€ instead of 20€, which is a great deal. The game offers more than 60 unique art pieces and I personally love Travis Anderson’s style. Last but not least, Volfyirion comes in a 120mm highly detailed miniature which you can use both in Mysthea and their upcoming game, Icaion.  Undoubtedly, a cool addition.

Stretch Goals will unlock new modes for the game which I have yet to try and they definitely intrigue me. The 4-player mode is an expected one, being possible with an additional copy of the game as in any game of that type. However, a cooperative and a solo mode will be possibly added, offering new experiences. Coops are one of my favorite genres if done right, and having a solo mode seems like a mandatory thing nowadays, so why not? Given that the “puzzle” is challenging enough, count me in!

This one caught me out of guard. I found some cards with a “?” in my copy, so I just thought that it’s unfinished art, quite common for a prototype. But it turns out that these cards are actually reserved to feature an illustration of the four most active backers of the campaign! I found that to be an interesting way to drive engagement and reward the people supporting the project, which is nice.

Make sure to check Volfyirion on Kickstarter if you find interesting! And join our Giveaway for a chance to win the Collector’s pledge of the game. 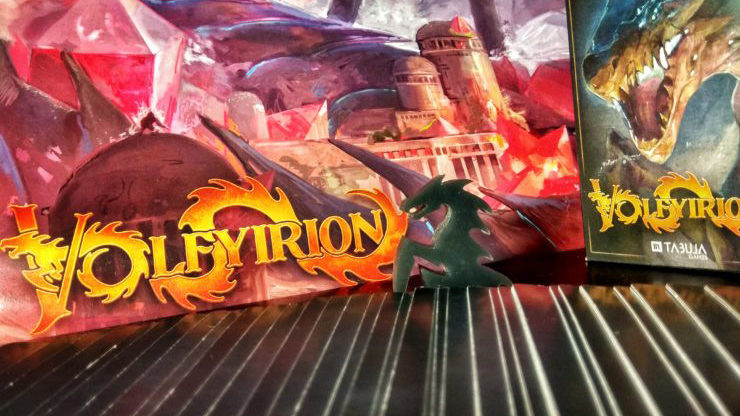 My prototype along with the amazing poster! 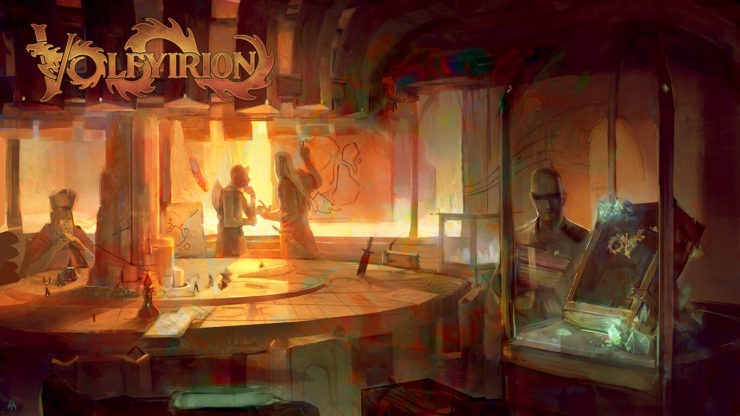 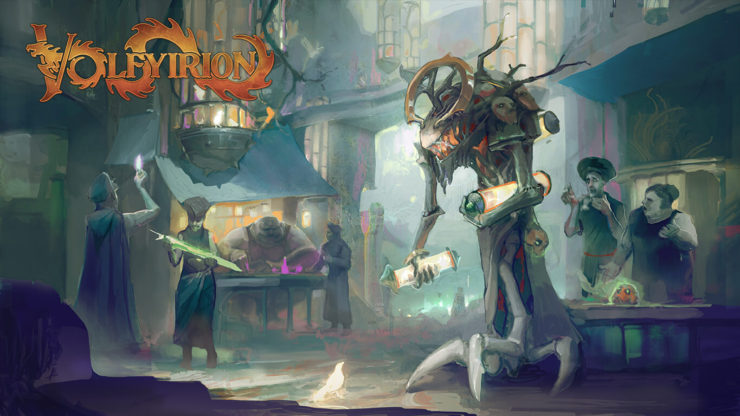 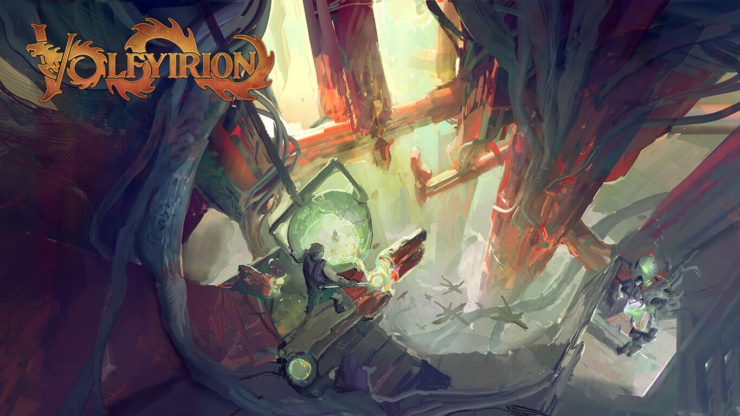 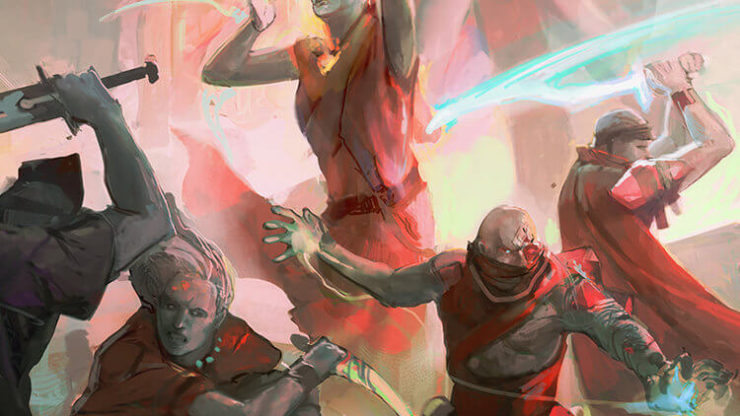 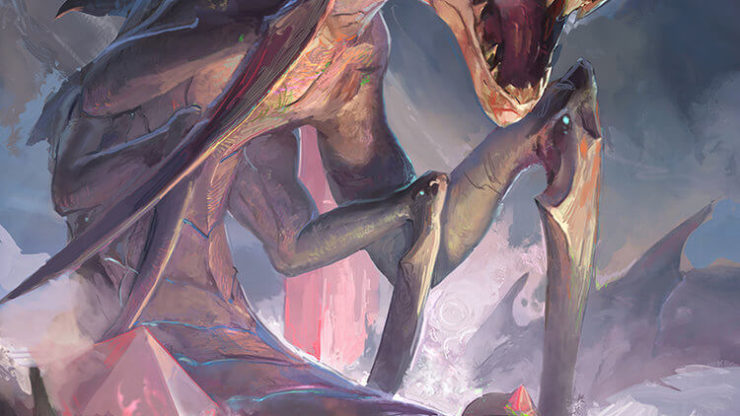 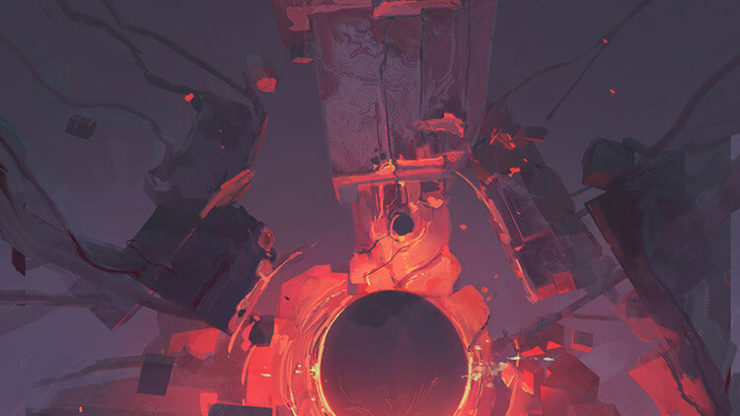 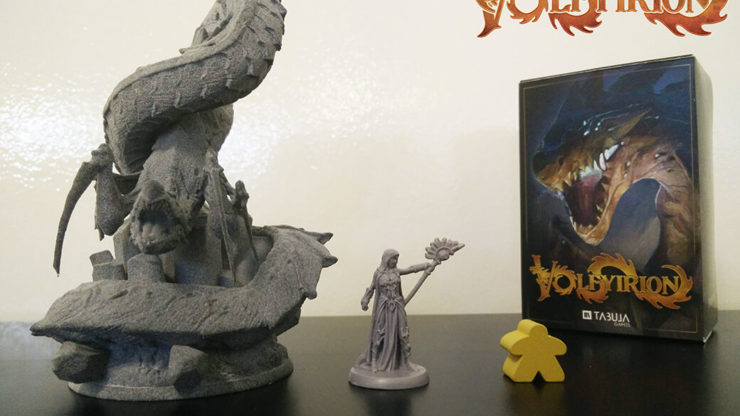 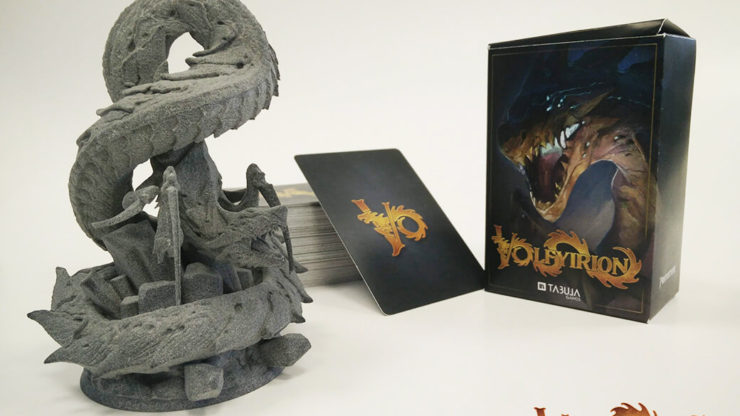 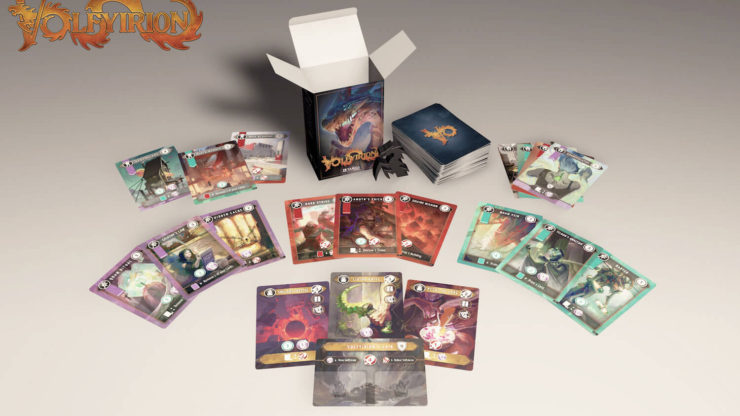 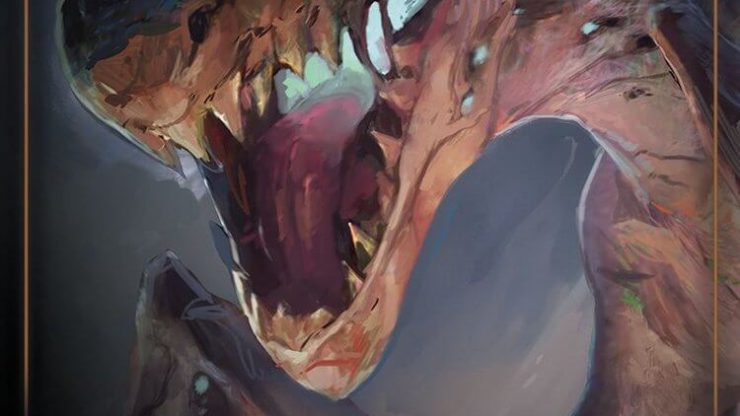 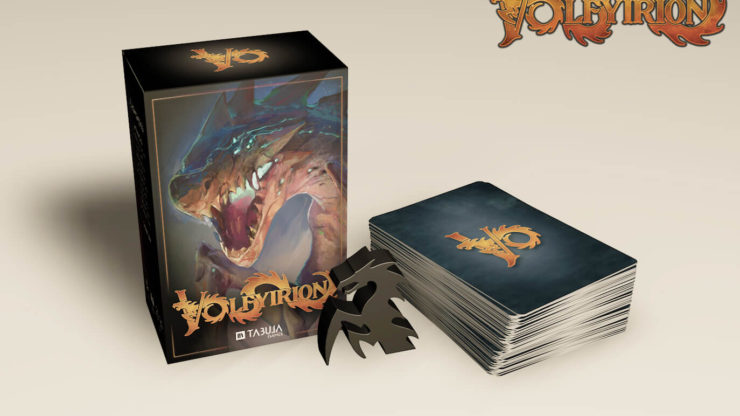