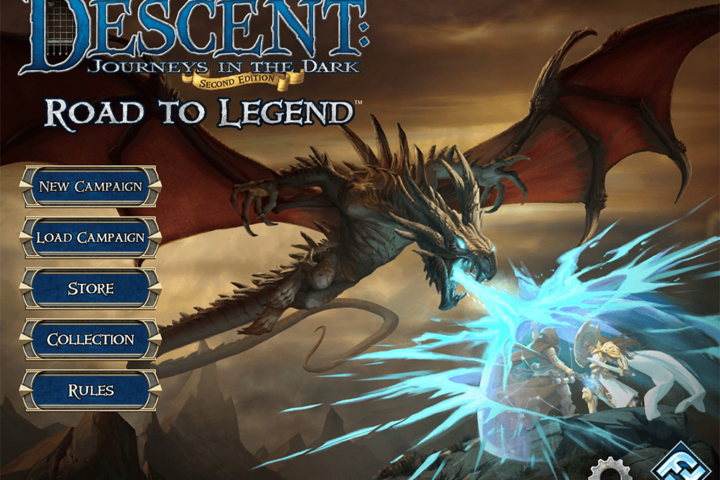 Descent: Journeys in the Dark – Road to Legend

Having played Descent with the new companion app Road to Legend, I have to admit that I’m really thrilled with it, since it seems to be a totally new experience compared to the classic Descent .

It is much better now that the app takes over the role of the overlord, because that let us free to cooperate and play as heroes in Terrinoth. The app instructed us throughout the whole game and told us which tiles to add to the dungeon, which monsters and tokens to place and how the monsters should move and attack. So, no one had to actually think about all those things, but instead we could all focus on our heroes’ actions. Of course, although the monsters were not guided by us, they were capable of anything! They could stay at range and attack with arrows or magic, they could attack the weakest hero or they would use their special actions to cause maximum pain! Not quite pleasant!

While playing, there was this actual feeling of exploration, for we could only see the chamber we were in, along with any search tokens or monsters in it. We couldn’t see what lay beyond and only when we had decided to open a door, was the new room revealed with the new monsters.  That was awesome, because you never knew what to expect and the whole experience was filled with constant curiosity and moments of discovery! Even search tokens hid a variety of effects!

Another thing that was new to us was the fact that we really had to be careful with the morale, since a hero cannot be knocked out countless times without any repercussions, as in a traditional game of Descent. Whenever a hero was knocked out, our morale was decreased by one and the thing is that if morale falls below zero, then the game is immediately lost! So, as you can imagine, it takes a great effort to keep your morale as high as possible. Not an easy thing, when facing those blood-thirsty monsters! What is more, if you think that you will be able to stop within a room for a while and rest, then you are fooling yourselves! This is out of the question, since when delaying on purpose and for no obvious reasons, dangerous and even deadly effects will begin to occur!

Finally, another difference is the fact that heroes’ and monsters’ turns alternate, which means that after a hero plays, the app activates one of its monster groups, then another hero plays and so on, until all heroes and monsters have completed their turn. So, no more traditional turn structure of Descent , but instead a more real-time experience has been added to the game.

To my mind, the app has come to add a new sense of discovery and exploration to Descent , giving the opportunity to take the adventure to a completely new direction.