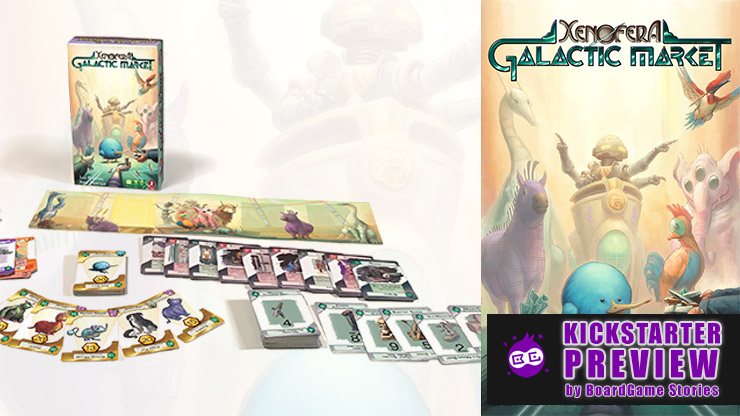 Puff Duck Games is launching their new bidding card game, Xenofera: Galactic Market, on Kickstarter! Galactic Market is a spiritual successor to their previously successful campaign, Xenofera, set in the same world. I had the chance to play a prototype of the game, which is nearly identical to the final version. Artwork and rules editing are both everchanging elements until the production begins.

Let me share my thoughts and experiences with this beautiful little game, as well as how it plays!

Xenofera: Galactic Market is a set-collection bidding game, where you try to have the most valuable collection of creatures. It plays over a series of cutthroat bidding rounds, trying to acquire exotic creatures.

You are a galactic Huntsman, willing to join the Great Galactic Hunt, which takes place every 10 years. Huntsmen from across the known universe will participate, trying to acquire the most desirable Xenofera, the alien creatures. Hunting them is a dangerous and dirty job, so this time you have an ingenious idea! Why not buy them, instead of hunting them? There is no better place than the Galactic Market for this plan!
Of course, more hunters like you had the same idea, making your quest harder. You have to outwit them and use your knowledge about the wondrous Xenofera to prevail.

The game plays over a series of bidding rounds, where players bid to acquire the active Xenofera cards. In the basic version of the game, 25 Xenofera will be used, compared to the 30 (all cards) used in the advanced version. You will use your resource cards to bid on each creature and your Action cards for a tactical edge when needed.

There are 4 types of cards in the game, used for different purposes. Let’s take a look!

Value cards are the currency of the game. Use them to bid on Xenofera cards to ultimately acquire them.

Xenofera cards depict a numerical value, which is their worth in Victory Points! Thus, gaining these cards will lead you to victory. Alternatively, Xenofera can be used as value cards bidding on new Xenofera. They worth the same in credits(money) as they do on VP. But be wary, Xenofera are discarded once used as Value cards, so use them wisely!
Additionally, each Xenofera has an origin planet. In “Experienced” play, you can use this element to gain extra points for having sets of Xenofera from the same planet.

There is only one such card, available to you since the start of the game. You can play a No Bid card instead of any number of value cards. This way, you don’t take part in the active bid, but you get to draw new cards from the Resource deck (Value & Action Cards). The No Bid card is the only card that returns to your hand after usage. 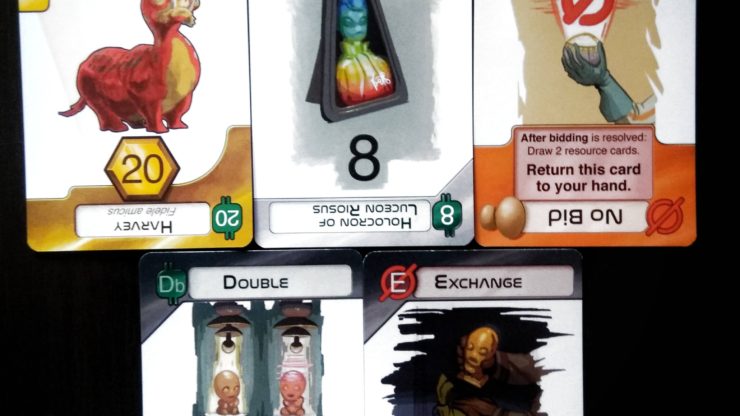 To start the game, each player takes a fixed set of cards (Values 1-5 & a No Bid Card). Shuffle the Xenofera and the Resource decks after choosing which set of Action cards you will use this game. In a regular game, 5 random Xenofera cards are removed from the game and none if you are playing the experienced game!

The flow of a Round

The game plays over a series of rounds, one for each Xenofera cards used in the game. Turn over the top Xenofera card, revealing it, to start a Round.

The game continues in this manner for the rest of the Xenofera cards. There might also be a point that no one bids on a card, with that card joining the next bidding round! These, and more twists, mainly coming from the Action cards and from outsmarting your rivals, are part of the game.

The game ends as soon as all Xenofera have been bid on and won. Whoever has the most points is the winner of the game!

Once you are familiar with the game, or if you are an experienced gamer, you can add some extra depth to your game. That happens by incorporating the Origin aspect of Xenofera to your game. You will play with all Xenofera and each that is part of a group of at least 3 Xenofera from the same Origin planet score 10 additional points!

You can add a speed element to your game, slightly changing the experience. When all players play a No Bid card, whoever covers first the Xenofera card with their hand wins it! That can definitely keep you at your feet, adding some tension.

Xenofera: Galactic Market is a light and fast-paced game that you have to relax and enjoy. Take risks or play it safe it’s the Galactic Market! Since it’s a secret bidding game, the luck factor comes down to your opponents. It is a psychological game that can bring good stress on the table. You have to take it lightheartedly as you will get outsmarted and lose a lot of Credits multiple times! Have some sci-fi music on, and you are ready for the bidding war.

That’s a perfect game for casual and new gamers, thanks to its simplicity and social interaction. Even if you are a hardcore, seasoned gamer, you will find some tough choices to make on this game. That’s mainly because the most important factor in this is the human factor. Players’ decisions will create different situations each time, in which you will have to adapt.
If you are one of those players that like to count game elements, that’s also the game for you. There is enough open information to help you make some smart decisions but just not enough to show you a certain path.
There are not many small bidding games out there that they are that straightforward and streamlined. Thus, if you are a fun of “read your opponent” and bidding games, that’s definitely for you!

The 30-days campaign of Xenofera: Galactic Market comes with a variety of Pledge options. You can go for the digital Pledges, having the PnP version of the game and cutout standees, for $1-$5! The game’s predecessor, Xenofera: A Game of Galactic Creature Capture, will also be available through this campaign.

The first Stretch Goals of the game are revealed and they are focused on upgrading the quality of the game. That’s a positive aspect for me, as it makes the game accessible while having the possibility of a higher quality end product.

We should also note that the game made it to the Top 5 of Stonemaier Games Design Day 2017 under the name “Gambler’s Dilemma”!
Make sure to check the project and support it if it’s the right game for you! 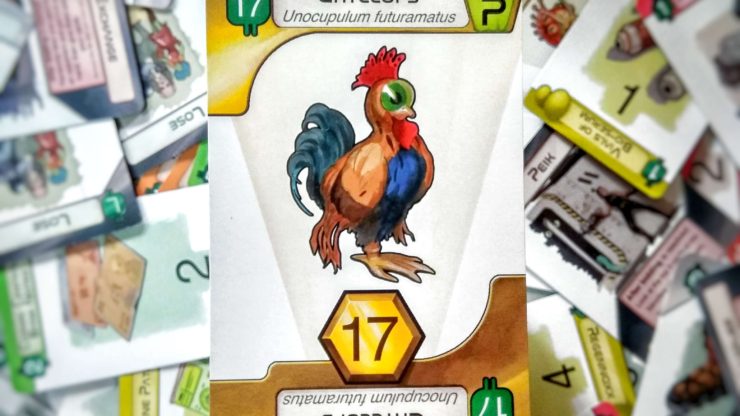 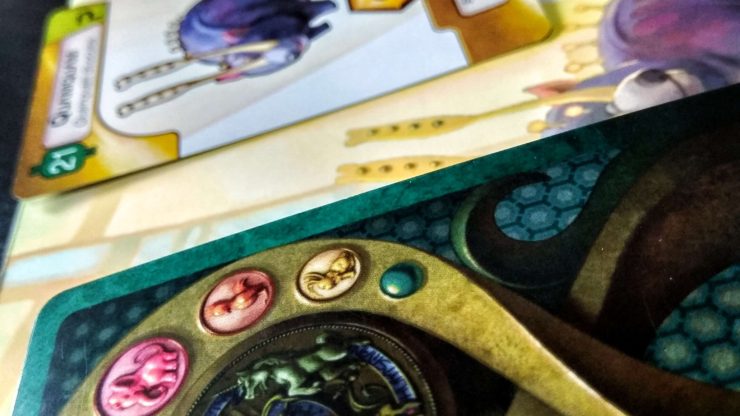