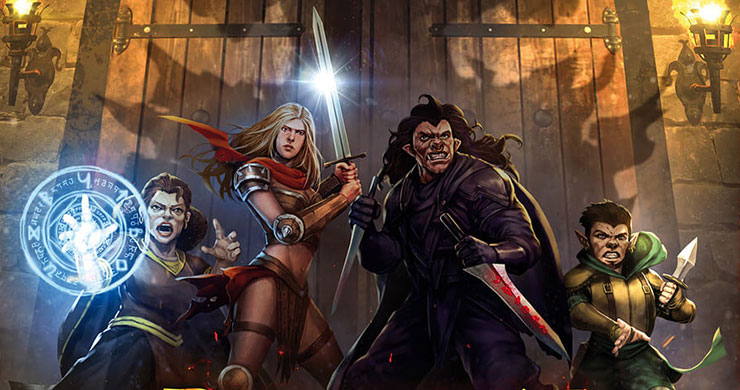 Exclusive Interview With the Creator of Dungeon Alliance – Now on Kickstarter!

It seems like a lot, and maybe a little too good to be true, but that’s exactly what Andrew Parks, co-founder of Quixotic Games, did with his latest design, Dungeon Alliance, now on Kickstarter.

The creator of the popular deck-building franchise Core Worlds has spent years coming up with a new fantasy deck-builder that is unlike anything you have seen, and he’s done that with Dungeon Alliance by introducing the option of picking characters to create a team that will explore an always changing dungeon, and managing each character on your team so they work together in harmony and lead you to victory.

It’s like the original Final Fantasy as a board game, complete with miniatures. We spoke to Andrew Parks about his years in designing games and what led him to creating Dungeon Alliance and getting it Kickstarted.

Bubbles: Thank you for taking the time to speak to us today, Andrew. How are you?
Andrew Parks: Good! Exhausted.

B: I bet. You’ve been setting up this game for a while now, haven’t you?
AP: Yes, two years getting ready for this Kickstarter now.

B: Are you satisfied with the results so far?
AP: We had a great first day today. Today [Day 2] was a bit slower, so we’re making some adjustments to the campaign.

B: So you’ve been designing games for a while now. Can you talk a little about that?
AP: Sure. I tried getting into the industry back in 1998, and eventually got my first game published in 2003 with Z-Man Games called Ideology. Over the last twelve years we’ve been getting involved with working on IP games and pitching our own games. Then in 2011, we worked on Core Worlds which is an science fiction deck-building game.

B: Core Worlds was your big claim to fame, wasn’t it?
AP: That’s correct! I would say that this was our breakout hit. We love deck-building games, and we were very interested in exploring deck-building games in a way that hadn’t been done up to that point, so this was a natural fit for us.

B: And that game was published by Stronghold Games, as many of your games were released by third-party publishers. But you have also published your own games before. At what point do
you decide this is the game you want to self-publish?
AP: Usually it’s when the game has so many different demands from a manufacturing standpoint, you say to yourself ‘I want to do this game and I want to do it this way!’ Our first selfpublished
game was Canterbury, which was Kickstarted back in 2013, where we ran a successful campaign and delivered to our backers on time. This latest game [Dungeon Alliance] we are choosing to self-publish as well. I wanted to have this huge variety of characters available because part of the appeal of the game is building and controlling a team that will be completely different from any other team you or anyone else has played before. Each character comes with its own personality, and your job as the player is to make those four different personalities work together. The game has over two hundred cards, and I hate having duplicate cards in the game, so every single one of those cards is unique and has a unique piece of art on it, and having that was important to me. Plus you have the 21 miniatures including the ones in the expansion, which I felt was important to have as well. And I would not have been able to achieve any of that in the game if I was not self-publishing.

B: It’s a really exciting concept! Where did the idea of Dungeon Alliance come from? Were you looking to create a game that was more innovative or something more familiar?
AP: Well, we haven’t done deck-building games in roughly five years and asked ourselves what was next for deck-building games. And I’ve been wanting to do a fantasy deck-building game, and I really wanted to make a game that involved running multiple characters per player, which I haven’t seen before in board games. The standard was each player had only one character to control, either fighting each other or co-op. Even in MMOs, you only play one character at a time, even if you created multiple characters, and they’re never going to meet, let alone play together. I wanted to do something different.
As I was pitching around to various publishers, one publisher mentioned they haven’t seen a game that combined deck-building with miniatures, which really got me excited! I re-envisioned the game with miniatures, re-pitched it, and they liked our idea but could not pursue it further, so I decided to pursue it myself. We had spend a lot of time putting together the concept of the game, and as we worked on it, we got more and more excited for it.

B: How long ago was that when you first pitched it?
AP: About two years ago.

B: And how long were you in development before reaching a playable version of the game?
AP: It took about a year, so this Kickstarter is about a year after the first prototype. From the first play with my daughter, there was a lot of mathematical flaws and it was a complete mess, but I knew I was on the right path, the essence of the gameplay was there, and I was very excited for it! So we built it from there, cleaned up some of the mechanics, a lot of play testing at conventions and with our dedicated play testers, until last summer when we became more comfortable with the version we had, so we stepped away from it and started to focus on the artwork; that took about six to eight months. After walking away from it for some time, we started tweaking it, and our best revisions came from that period. By January, we felt that the game was polished and we’re ready to launch it.

B: And you launched it recently on Kickstarter, which you’ve had experience with before. Is there anything you learned from that experience that you are bringing to the table this time?
AP: That first experience with Canterbury was successful, but it was a rough road! We learned a lot about what people are looking for, what people would accept and not accept as exclusive content, what they wanted to have in terms of value for their dollar, so we had to make a tremendous amount of changes during that campaign. We implemented everything we learned three years ago, but already in day two of this campaign we’ve had to make several changes based on early feedback.
And that’s just part of being in a community like this, and that’s why I chose Kickstarter again, for its community in addition to my own familiarity with it. And the idea that you are going to get the lion’s share of supporters on Kickstarter because people want to give you a chance is not true anymore. Now, they’re excited about your product, but they want to know what they are getting in return to make their pledge worthwhile and without waiting for the retail version. And it’s a fair question to ask.
Backers ultimately need more value for their dollar, so we added the expansion with the base game at no additional charge, making it available to backers before it is released in stores. Backers also like getting something exclusive but doesn’t affect gameplay, which has comes up a lot, so we’re creating epic hero cards for each of the heroes in the game.

B: Agreed this is fair, but is that also frustrating? We live in a world now where backers are accustomed CMON-type rewards, and if you are not offering comparable rewards to your backer, you’ll struggle to hit your goal.
AP: I think that’s there to a certain extent. I’ve certainly seen some of the comments online for the game where people are saying ‘well, I think this game has brilliant mechanics, I love the artwork and the miniatures, but I just backed or waiting to back this other project, so I think I’m going to wait for this one.’ You can do all the things that people are looking for in a game, but because it may not be epic enough, they may not support it, and that can be frustrating. But we also live in a thriving board game industry, so we can’t bang and head and wish for the old days when positive comments on your game was enough, we have to adapt and we have to try.

B: Do you have any plans for further expansions in the Dungeon Alliance world?
AP: Absolutely! If we can make the Dungeon Alliance system something that people will love, we have so many ideas for how we want to expand it, creating campaigns, individual stories, make that universe richer. We really want this game to be a stepping point for a bigger world, similar to what Core Worlds did and even make it bigger. We have a lot of ambitious plans for it.

B: Finally, do you have any advice for anyone looking to get into game design and for anyone interested in running a crowdfunding campaign for a game they designed?
AP: So first, if you’re interested in getting into game design, the most important thing is to be designing games all the time. You have to be designing games because you love it. And get ready for rejection, because you’re gonna get it. It took me five years to get my first game published, so a lot of rejection then, and I still get rejected today. But just have confidence in yourself and take satisfaction in the art you are creating.
As for crowdfunding, I would say talk to as many people as you can before running the campaign. Study the other campaigns that are out there, go to the comments sections and read what people like and don’t like. Talk to people in person or online months ahead of your campaign to build awareness and find out what it is they want to see. And be weary that the advice I give right now for Kickstarter will likely be obsolete in a year, because it changes that much.
And if your campaign is not successful, at least you will always have this game you designed, it will always be yours, and you can learn from it.

B: Great! Those are all my questions. Thank you very much, and good luck with the campaign!
AP: Thank you, I really appreciate the opportunity. 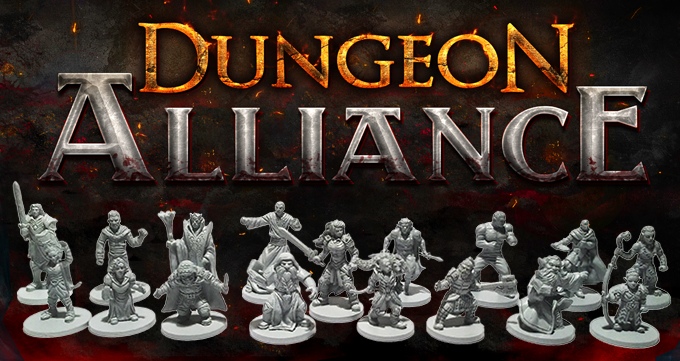 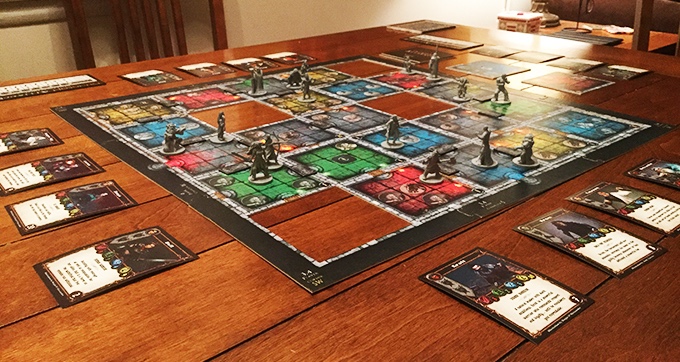 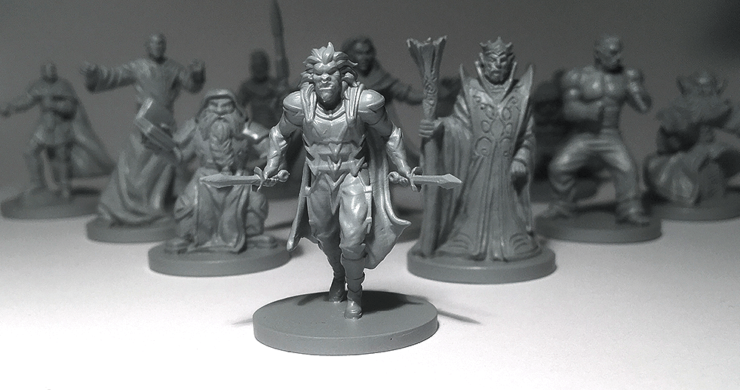 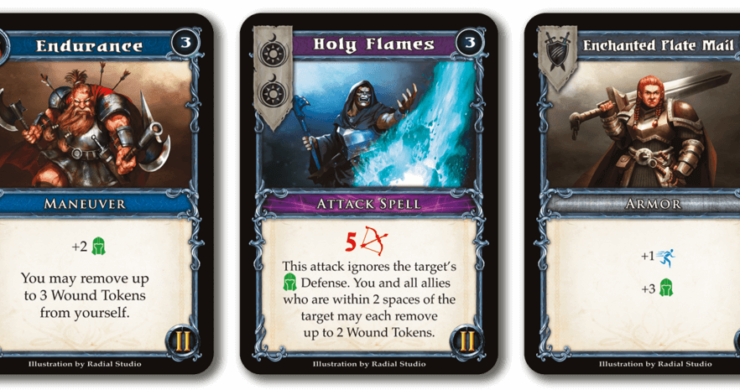