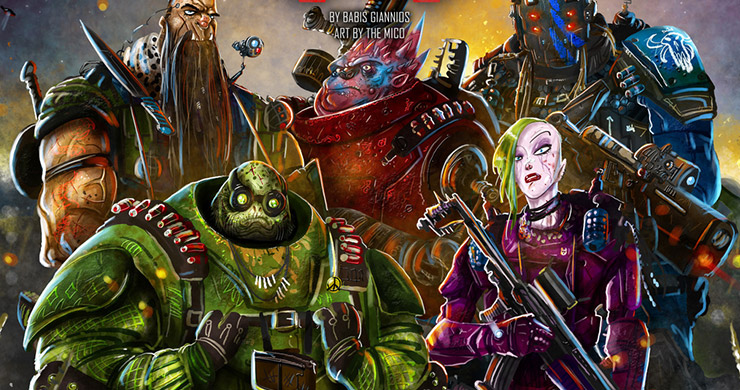 “Galactic Warlords”, by Archona Games, is a card-driven tactical deployment game of planetary battles which is currently live on Kickstarter.

We came in touch with the designer of the game, “Babis Giannios” to ask him a few things about the game:

What inspired you to start designing “Galactic Warlords”?

Galactic Warlords was initially inspired by Carcassonne! Yes, that’s true, even if the finalized product differs quite much from the beloved tile-laying game. I wanted to create a game where your pawns will adopt different roles depending on where you place them (monks, merchants, wizards…etc.).

In the game, players play as malicious and resourceful galactic warlords. They have power, prestige and will to reach their own ends. They are ruthless! I want players to feel as powerful and dutiful! I want them to decide on which mercenary to employ, which planet to bombard, how much manpower to use, which mission to follow and which faction to aid! I want them to feel as if the galaxy is their own sandbox and hone their skills in strategizing. The game has some ‘light’ mechanics which make it ideal for light and family gamers, thrill-seeking gamers, amateurs and hobbyists.

What was the greatest challenge you faced during the designing of the game?

Designing this game wasn’t a challenging endeavor. However, there were many hours of balancing the cards especially when it comes to probabilities connected with card abilities. Each game brought up new information, new abilities and as soon as that happened I was going back to tuning and balancing the cards again.

The eternal question that everyone has, did you start with theme or mechanics?

Theme first! As far as my designing method is concerned, it’s always the theme! The title of the prototype was “Beyond the Mist”, narrating the voyage of heroes across the world that sought to gain fame and fortune by exploring new lands. As soon as I got that idea working the mechanics of the game started to form up!

What is your favorite element/mechanic on your game?

My favorite element of the game is the player’s mercenary line-up! It depicts the way of how a warlord’s chain of information is formed. Mercenaries cooperate and forge bonds between each other, some of them more easily than others. Mechanically based, it is a simple process as players connect their mercenaries together trying to perform certain abilities. Should they do it successfully though, new abilities might spring up from the partnership of two mercenaries…who knows? It adds a lot of versatility and thematic backstory.

Which is the No1 Tip for new designers that you would share?

Feel free and use your imagination in any way you see fit! Dare and try! Be yourself! Think outside the box! And design what you’d love to play! Otherwise you’ll find that your imagination can be rather restricting and uninspired.

Where people can find out more about you and your designs?

My works and recent news about me and my projects can be found on my webpage “baboxgames.com”. I update it quite often and this is where I have my blog as well.