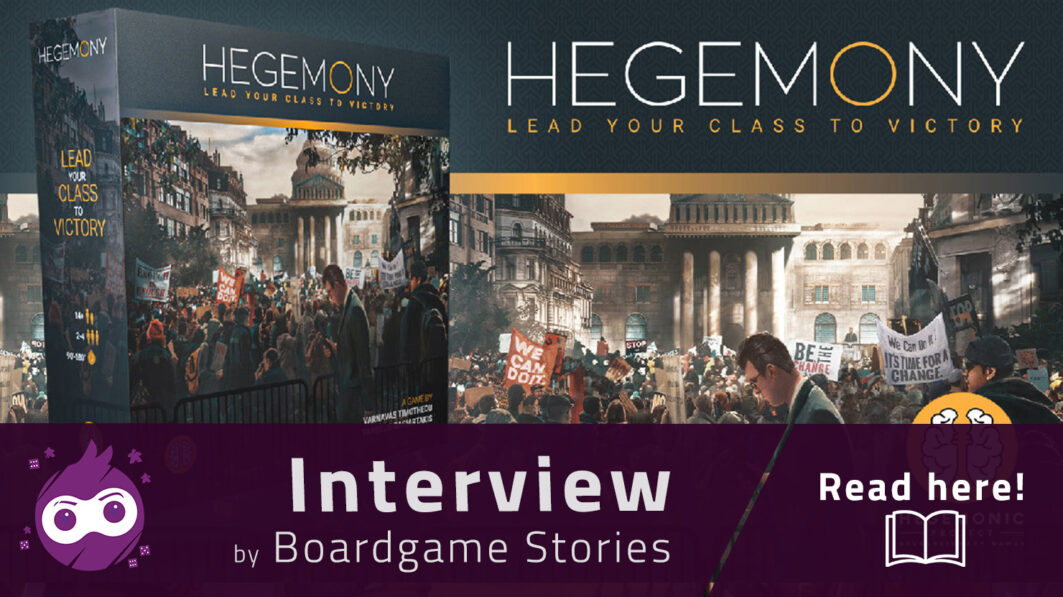 Hello! Please tell us a few things about yourself!

My name is Varnavas Timotheou, I am the founder of Hegemonic Project Games. I grew up and currently live in Cyprus. During my studies of International Politics (BA) and later of the International Political Economy (MA) I was thinking about ways to create something that would leave a positive social impact. During that time, I also stumbled upon Antonio Gramsci´s concept of “Cultural Hegemony” and was intrigued by its explanatory potential. Pretty fast I got the desire to find ways to share this theory with a wider audience. However, I wanted to make this learning experience fun and not just replicate a lecture. At the same time, it was supposed to be a project that would let people interact with the theory to generate intuitive understanding. Therefore, I got the idea to develop a board game as this would check all of those boxes. After teaming up with game designer Vangelis Bagiartakis, we got right to work. Yet, the game idea started to grow and, with it, our team started to expand. As the idea to let the players engage on the board in a nation-scenario existed early on, our team of academics started to introduce more theories into the game in order to reflect the workings of the nation as much as possible while, simultaneously, our game designers made sure that all of this had interesting, fun, and dynamic gameplay. That’s how Hegemony: Lead your Class to Victory was born! 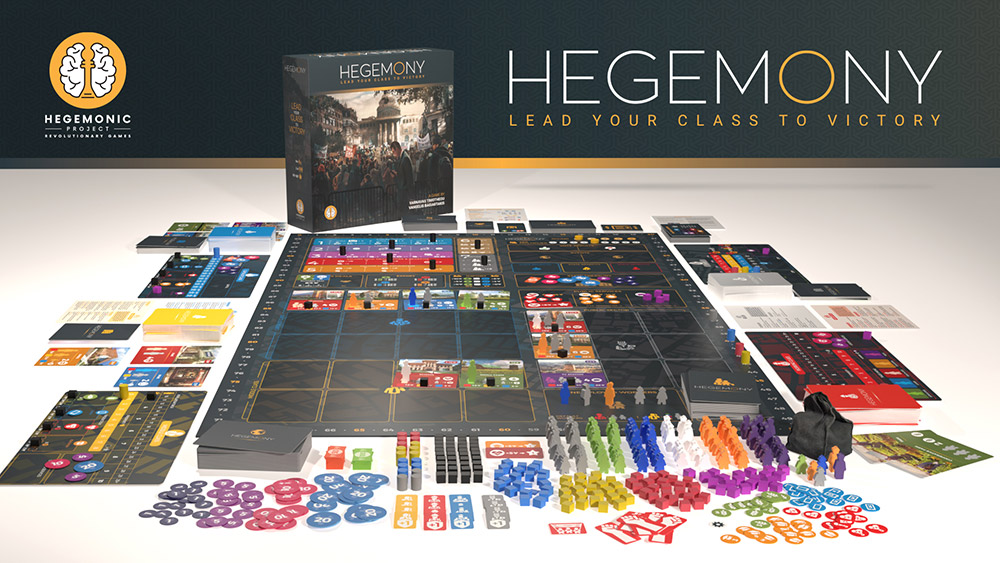 Please give us some info about Hegemony. What is the game about?

In general, Hegemony is a 2-4 player euro game in which players are given the opportunity to simulate a whole nation politically and economically. There are four classes at your disposal: Working Class, Middle Class, Capitalist Class, and State. All of them have different abilities, different goals, and different available actions which makes the game highly dynamic and asymmetric. The cool part, however, is that (just as in the real world) the classes do not just play independently from each other but are highly interconnected on the board. Every decision you take has political and economic consequences for the other players which creates some very exciting and fun scenarios and provides a high educational potential.

What was the greatest challenge that you faced during the designing and development of the game?

Well, the greatest challenge was probably the initial idea: To create a game that would simulate the economy and politics of a nation, to underpin it by academic theories to make it educational and, on top of that, to make it asymmetric AND, of course, a fun experience was a list of very ambitious goals, but I really wanted to combine all of them in one project. And once the basic structure of the game was erected, it took countless hours of development to make sure that the classes are balanced, that the game still simulates reality and correctly depicts the academic theories and that the fun level stays up! After three years, I am proud to say that we finally achieved all of those goals!

For one, there is definitely the theme. To my knowledge, no game attempted to do what we did here: To use a 21st century nation and its domestic and international politics and economy as the main setting. Additionally, the simulation aspect is really cool and unique. Then, the educational aspect is special as well as the players basically get an intuitive crash course into political science, economics, and political economy just by playing a game! Finally, reviewers have also told us that the way we made the asymmetric roles interact with each other was something that makes Hegemony stand out. 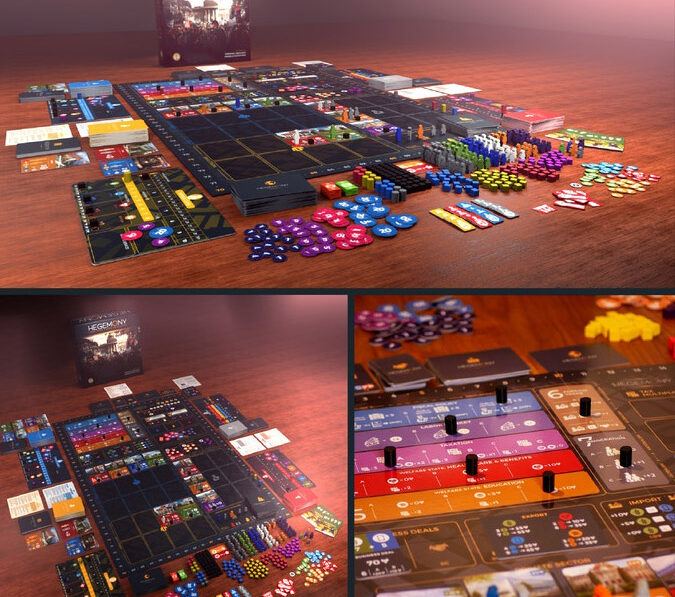 What is your favorite aspect of the game?

That is a tough question! To be honest, this game is my baby and I designed a game I really would want to play myself, so I kind of like everything about it haha! But If I would really have to choose, I would probably pick the elections: It’s so much fun to see the players discussing, forming alliances, and trying to convince each other to vote in their favor, I absolutely love that. However, the long-time strategy possibilities in the game´s engine are also very high up on that list as well!

What kind of gaming experience does Hegemony create?

Hegemony has a strong role-playing aspect as players quickly begin to feel their roles and try to achieve their goals. The conversations that start to develop are fantastic and often mirror real-life discourses! Simultaneously, the game is competitive in nature, but, once again, just as in real life, the classes have to collaborate as, otherwise, everybody will be worse off. So that also gives the players enough common ground and willingness to scratch each other’s backs. 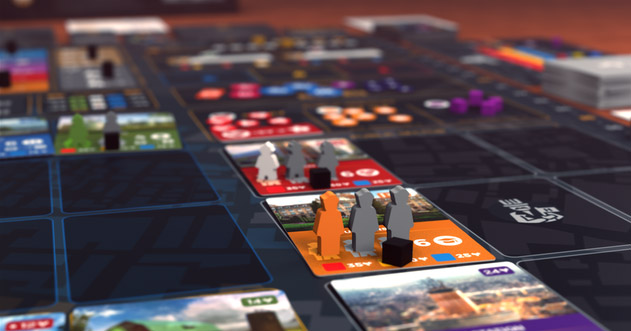 What kind of players are going to enjoy the game?

If you enjoy heavier euro games and/or are interested in politics and the economy, this game is definitely for you! And do not feel intimidated if you do not know anything about those two spheres, that is what the game is designed for!

Hegemony is an asymmetric politico-economic card-driven board game. Please tell us the reason someone who is not interested in politics, should play the game.

Even if you are not interested in politics or the economy, you will enjoy the game´s asymmetric nature and the interconnectedness of the different roles. Additionally, the game´s engine provides unlimited room for different strategies and, also, has nearly endless replayability, so you will not get bored anytime soon! Finally, maybe the game will make you more interested in politics as you will learn more about it without even realizing it 😊 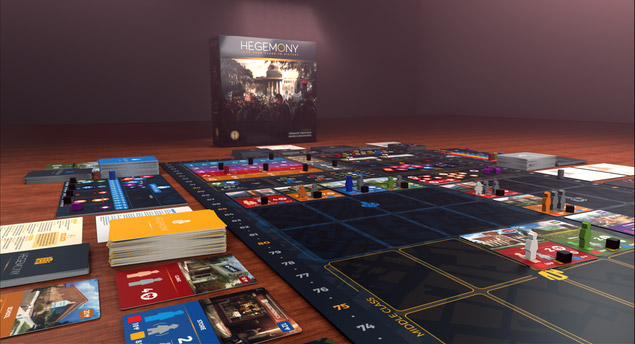 What are the plans of Hegemonic Project Games for the future?

Our number one priority right now is to have a successful Kickstarter, so we can deliver our backers a high-quality product for them to enjoy. In a wider scope, we definitely will continue to design innovative and unique board games which are not only fun but have a social purpose. I want people to remember our games not just as exciting, but also as educational.