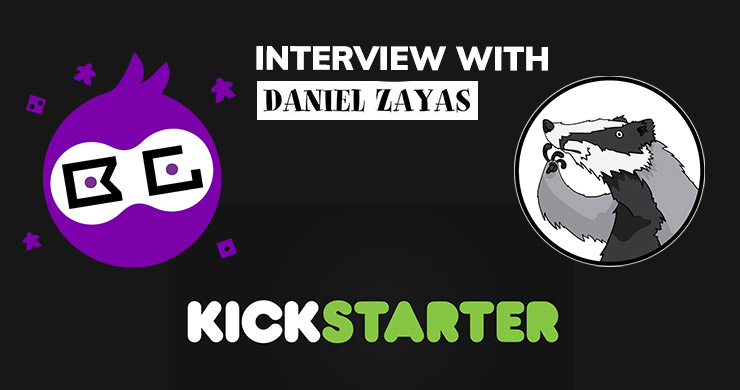 Kickstarter is a crowdfunding platform that keeps bringing life to creators’ dreams and ideas. Following its success, Kickstarter shared a list of consultants that can help creators set up their campaign and support them through their journey with their expertise.
We had the opportunity to Interview one of the 24 currently available consultants, an expert on campaigns of our favorite hobby, “Mr. Daniel Zayas”.

Theo: Hello Daniel.
Thank you for sharing some of your precious time.
For starters, let us know some things about you and your career. Your love for tabletop games and how you ended up on the Experts list, before letting us know about the program itself.

Daniel: Hello, Theofilos. I got my start in the board game industry much like most. I played a lot of games. Playing a lot of games led to organizing a Phoenix city game night three years ago which averaged about 50 or so people weekly. The game night eventually came to an end when the organizers moved away but allowed me to pursue my passion through other avenues.

That eventually led to my blogging about board games, where I made the valiant attempt to objectively rank Kickstarter campaigns weekly based on best practices as taught by Jamey Stegmaier, James Mathe, and Richard Bliss, as well as taught in the various industry Facebook groups. The mission has slightly adjusted over the years, but the remnants of that project live on in the Board Game Badger project which I still compile each week.

Developing a reputation this way allowed me to fill the open marketing director position at Eagle-Gryphon Games in August of last year.

There is a saying that the harder you work, the luckier you get. I worked fairly hard as a blogger, as a marketing director, and an admin 20 some odd industry Facebook groups. My involvement in the latter allowed me to see when a Kickstarter representative pitch the Experts program in one group. I had helped many campaigns in various capacities by this point, so I felt I was qualified to apply, but if I wasn’t selected, it wouldn’t detract from my current ambitions.

I was alerted that I was being seriously considered via email from Kickstarter. At that point, I was interviewed very similarly to a job interview, and the references I had listed (both successful and unsuccessful) were contacted. About a week later, I was alerted that I had been selected to be a bona fide Kickstarter Expert, and about a week after that, my information was released on the listing and here we are!

T: That’s an inspiring career story! When you work hard and are passionate about what you are doing, it will eventually pay off.

Our main topic of interest is the Kickstarter Experts program. Can you tell us more about that and how it can benefit future campaign creators?

D: The Kickstarter Expert program addresses a number of concerns.

Firstly, we all use Kickstarter and perhaps take it for granted sometimes, but this is an actual business with employees and expenditures. They only exist and grow as a direct result of projects which are successful on their platform. Why not better those odds for first-time creators (or simply creators overall) by vetting industry consultants who know their stuff and can help grow crowdfunding across many projects?

Secondly, I think Kickstarter understands they have a spam/scam problem in their direct messaging system. How do you maintain open communication with backers and potential backers but also police it for content spam without a ton of overhead of employees reading your private messages? Kickstarter decided to cut the problem off at the source. If every creator widely knew there was an Expert program, even with the spam messages, most of them would not fall for it. Instead, they would have already hired someone or at least known they were not hiring someone who isn’t officially vetted. That is a huge boost to trusting Kickstarter as an improving and evolving platform.

As a Kickstarter Expert, the closest way to define what I do is an incubator for  tabletop campaigns. I do literally everything except be the face and voice of the campaign. I very much believe that a creator should be the star of their own show. But I help them make a lot of tough decisions, such as prototyping, manufacturing, advertising, campaign layout, press, etc. I also only accept payment when we succeed together. I charge $1000 plus 5% of the campaign, but we don’t square up until Kickstarter releases the funds to the creator. There is literally no risk in requesting my services, which is even a step beyond what other Experts do in their consulting businesses.

T: Taking into account how Kickstarter evolved through the years, I believe that’s a big step towards the right direction. Nowadays you will go against hundreds of other live campaigns on the tabletop category, so, an expert who knows a lot about the industry, the market and the crowdfunding platform itself, would certainly be a valuable asset.

It would be interesting to let us know, according to your experience, the top two mistakes made in campaigns along with the top two tips you would like to share.

D: The top two campaign mistakes:
Launching too early and trying to get by without a marketing and art budget. Usually, these mistakes are closely related. You can put extra funds into a campaign over time to gradually improve it while you market organically, or you can have enough money to invest in the project in a normal time frame, but still spend time marketing organically. Some creators are just too confident in where they are in the process without really knowing that they have a lot of work ahead. You don’t need to launch today, and art will sell your project, so don’t shortchange either of those truths.

My tips essentially:
To not feel any pressure to launch before your game is ready, and to invest in art from an actual artist who makes their living that way. Otherwise, you are shortchanging the project beyond redemption.
T: Seen both and they hurt a lot. Launching too early and then trying to correct the campaign, adding details while its live. Also, not well done aesthetics may be your doom right off the bat.
That reminds me of “Scythe” from Stonemaier Games, which had an outstanding marketing campaign along with stunning art and overall aesthetics.
Can you name a few campaigns that did well on both regards, even some you worked on?

D: “Loot and Recruit” as well as “AEGIS” are on Kickstarter now and I worked on those projects.

I did not work on “Unfair”, or “The Grimm Forest”, but those two campaigns are well worth mentioning as solid campaigns.

T: Great! Can you also let people know where they can find you and learn more about you and your services?

D: Yeah! Head over to dzayas.com where I can be reached via Skype and Social Media!

T: The program will help for sure many creators, new and experienced ones. We are glad that we had the chance to know more about it from an Expert! It was pretty informative, appreciate it. Is there anything else that would you like to add?

D: I want to leave off saying that you don’t always need an Expert to fund, and you don’t need to hire me for basic advice. I am here to grow the board game hobby in whatever small capacity I can.

T: And that’s exactly what is wonderful about this community, friendly people, ready to help and show their passion so the hobby can grow.
Thank you for your time!