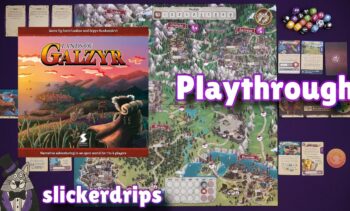 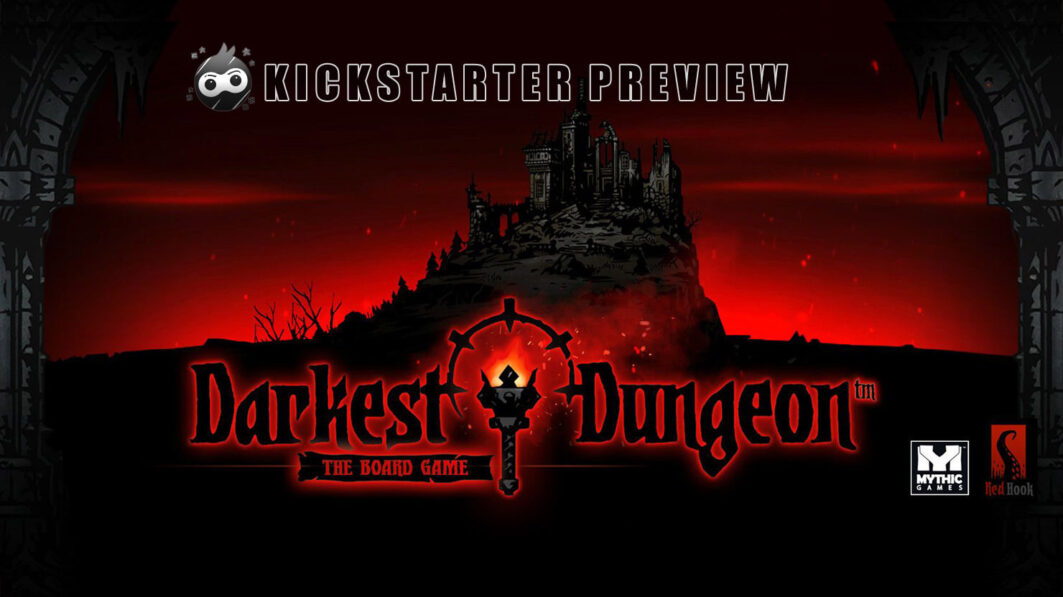 Mythic Games is coming back to Kickstarter with another unique title, continuing their excellent track record as campaign creators. Darkest Dungeon will be the tabletop implementation of the acclaimed video game developed by Red Hook Studios.
Known for being a challenging gothic roguelike RPG, its tabletop version will bring this and more to the table! Will it be able to capture the psychological tension of adventuring though? Let’s take a look at how the game works so we can find out:

In Darkest Dungeon, you take on the role of brave adventurers heeded the call of the Heir to the Mansion and its nearby Hamlet and came to aid. You will delve cursed dungeons as you try to bring the Hamlet back to its former glory. Your final quest will be in the Darkest Dungeon itself, trying to seal the gate of madness once and for all. Are you strong enough, both physically and spiritually, to make it?!

The game campaign consists of 4 Acts, where the first 3 of them include 3 Quests (2 General & 1 Boss). The 4th and final Act (if you make it that far!) takes place in the Darkest Dungeon, as its gate opens.

An interesting aspect of the game is that a Hero can permanently die, letting you pick one of the remaining characters to continue. In case there are no adventurers left, the campaign ends with a loss!

Let’s take a quick look at the 3 possible ways a Hero/Adventurer can die:

Deathblow: A Hero receives a Deathblow while being at 0 HP.

Heart Attack: A Hero’s Stress level reaches 10 while having either an Affliction or Virtue.

Giving into Madness: A Hero receives a 4th negative quirk.

I had to start with this game element, as it adds an interesting psychological layer to the game, making every battle, and every choice tense. You start the game with a different mindset than in most campaign games. 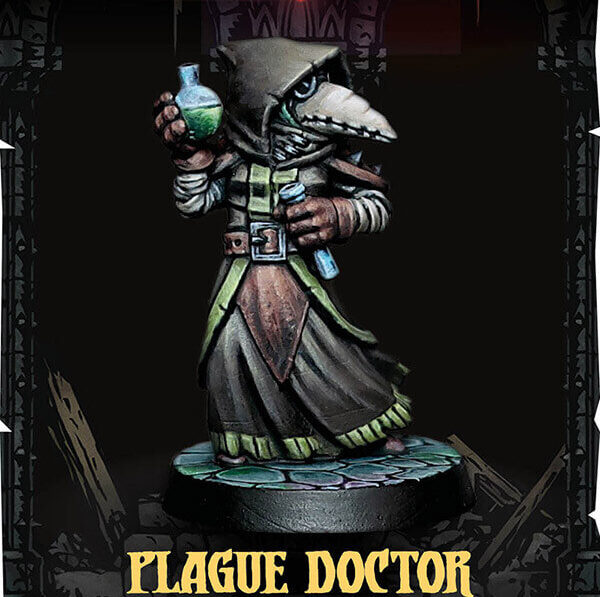 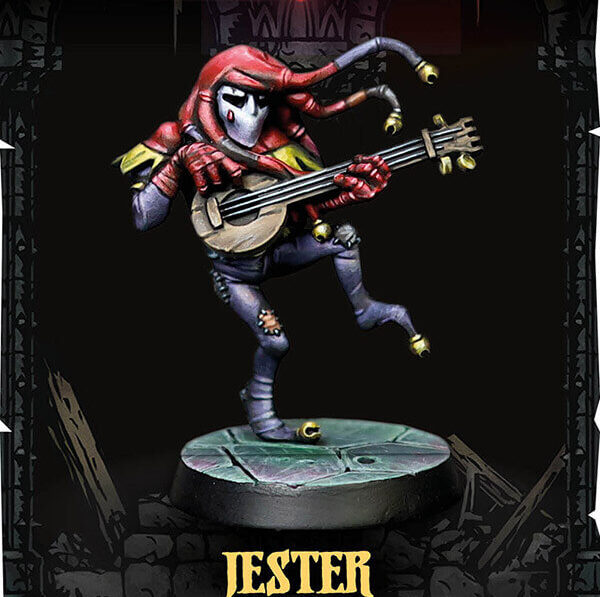 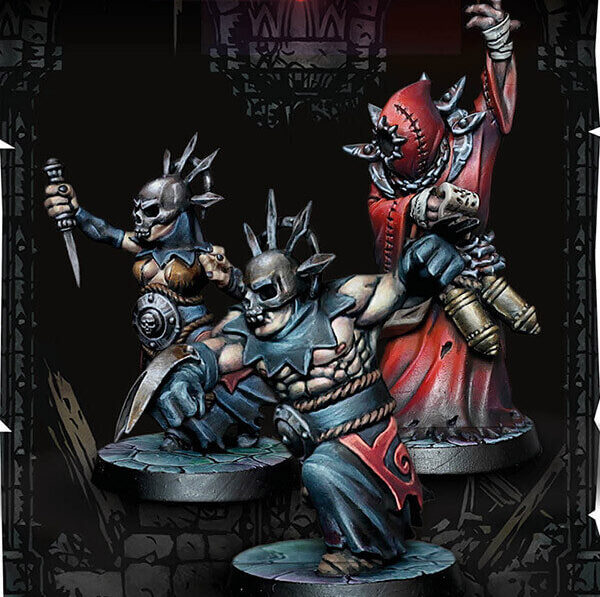 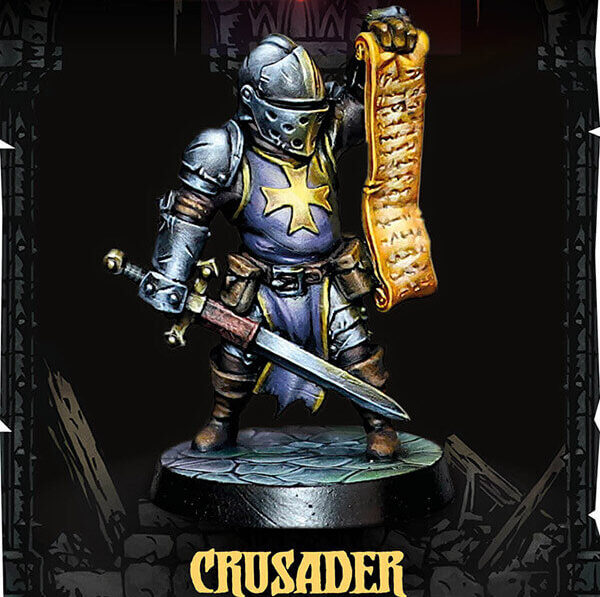 Starting off your 1st Quest

You will follow these steps to create your first Quest:

During your turn, you can perform the following 3 actions:

Scout (optional): All Heroes suffer 1 Stress and all adjacent rooms are revealed! This an optional, group decision, so every Hero must agree upon taking this action.

Exploration: During this action, you can freely discuss strategy, change your Heroe’s stance (can be Aggressive, Defensive, Ranged, or Supportive), and use any provisions.

Then, you move to a new room, and to do so each player must roll 2 Exploration dice. In case you have already Scouted that room, you only roll 1 Exploration die each.

Exploration dice have a set of negative results that will challenge you in multiple ways. Provisions will prove to be vital at this point, helping you avoid fatal situations.

Entering a Room: After the Exploration action, you finally enter the chosen room. Then, a different effect will take place, according to the type of room you entered.

There is a variety of rooms, from Treasure or Monster rooms up to plain empty rooms.
Lastly, during Quests, you might find rest points which will help you recover Life and/or Stress. 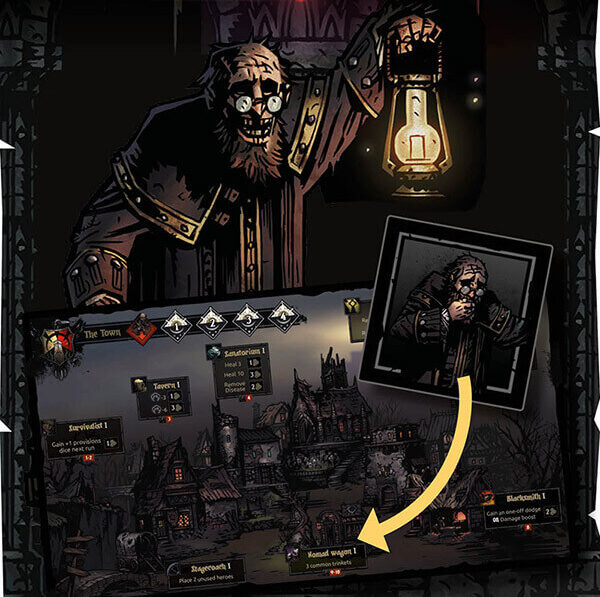 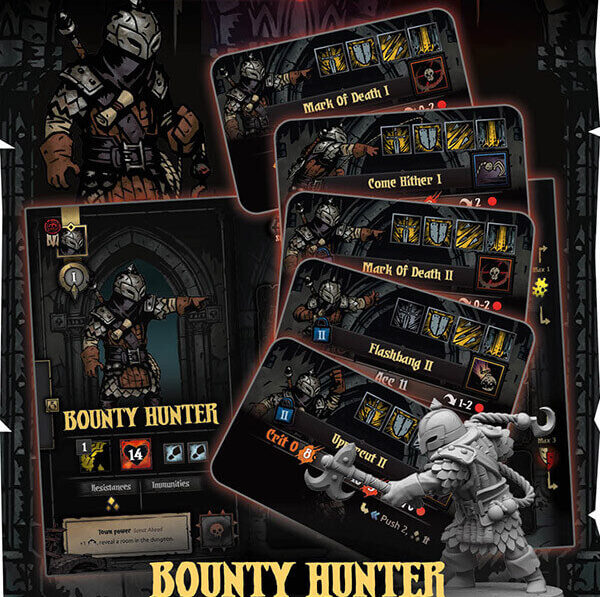 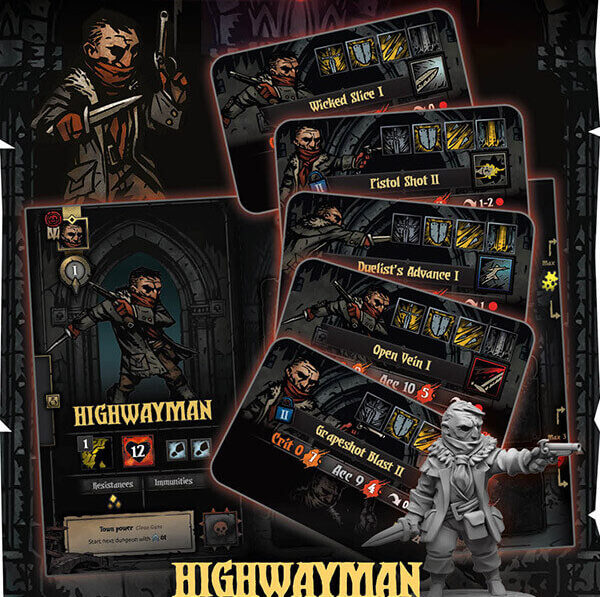 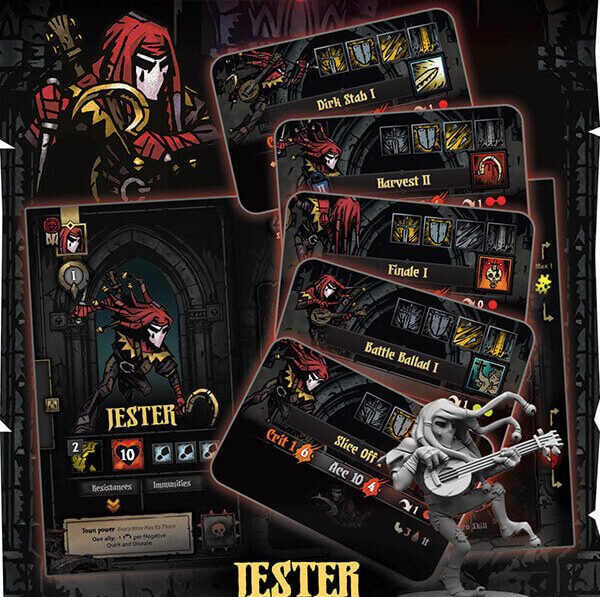 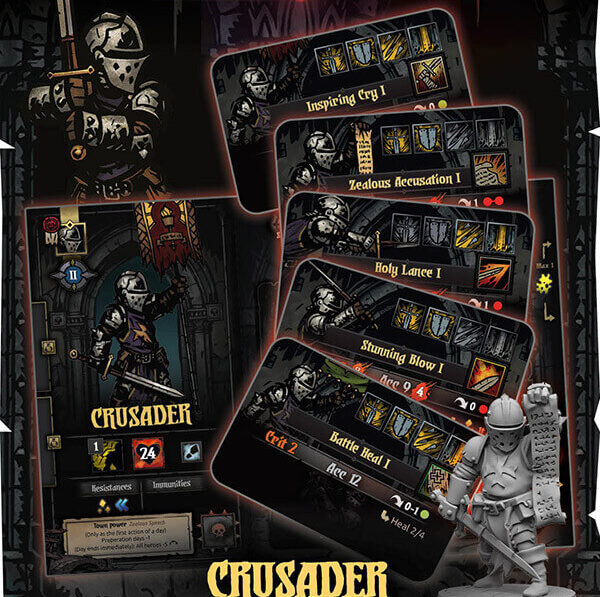 Sinister Monsters may lie in the shadows of the room, initiating battle once you enter!

Interestingly enough, to begin a battle, you have to create the room in which it takes place. Deploy the Heroes and Monsters in their designated spaces. Monsters are drawn randomly, with their awesome miniatures placed on the map. There is also a chance to draw a Large Monster, which takes the place of 2 Monsters, but as you can guess it will be pretty tough to beat!

Lastly, you place the room’s Loot, if there is any, and you are ready to fight.

Heroes and Monsters take turns via an initiative system, which depicts whether a Monster or Hero will be activated. Each miniature will be activated in order, according to its stance, with the Aggressive stance going first.

During their turn, a Hero performs 2 actions, while they can freely consume any provision they like.

Let’s take a quick look at the available actions:

Monsters come with built-in AI behavior which is quite straightforward. They use the same symbology for their skills, and usually, just move towards a target to use a skill. Simple and deadly as that!

A battle ends once all Monsters are dead, hooray!

During the battle, you will receive wounds by the vicious Monsters, reducing your Hit Points. “At Death’s Door” is what your state is called once you are at 0 HP. At this point, you will no longer take wounds, but you will be rolling the Deathblow die instead. If you roll a Skull you are dead! Simple as that.
I love this mechanic, as it adds a thrilling element to the mix.
This can result in some pretty epic and memorable moments!

Trinkets are special items you can acquire but within a given limit. The twist here is that each Trinket has a positive and a negative side, differentiating them from the classic “items” we see in most games. You will have to follow a condition in order to use their positive effect, and once you do so, the Trinket flips to its negative side! Use its negative effect in a similar way to flip it again to its positive side. This brings nice variability to the game and an interesting set of choices.

Quirks are another thematic layer added, representing the psychological effects the dungeon has on your Hero (you). These can be positive, or negative, according to what epic feats or unspeakable horrors you go through.

Limited to 3 Quirks at any time, acquiring a 4th negative Quirk will bring death upon your Hero!

There is a list of Diseases a Hero can get, each with its own unique and “irritating” effect, making your adventure even more challenging.

On top of all these aspects, Stress comes to complete the set. We are very familiar with this one ourselves, in our normal daily lives – just imagine living in the dungeon! A lot of stress will result in afflictions (negative effects) or even a Heart Attack (death) for the faint of heart. In rare situations (via a die roll), a Hero might be inspired by all this adrenaline, gaining a virtue instead (positive effect).

Returning to the Hamlet

After a quest is over, regardless of the outcome, you will return to Hamlet. This is where you will reset most of the game’s elements and get a chance to rest and prepare for your next adventure.

What is fascinating about this is that a micro-game lies within this phase. Let me elaborate.

Hamlet is a Town board with multiple buildings that can be used by Heroes. A Town event starts this phase, stating a special effect and the number of preparation days you have until your next quest.
These days operate like action rounds where you get to activate a building’s action each day. This lets you prepare your own way, taking advantage of the available actions.

Lastly, the Town can grow, and buildings can be upgraded by paying the right amount in coins. This adds to the plethora of choices you have during the game, as well as to its theme.

Lastly, it’s important to note that Experience and leveling up can be found at the core of the game, as you would expect from an RPG game. Upgrading, and acquiring new skills sets you up for the terrors you will find ahead.

Fans of the digital version will love this one, as it stays true to the Darkest Dungeons’ core experience. From the grim theme to the tense and terrifying battles. Highly replayable and tactical, bringing this dark adventure to your table.

Even if you are not familiar with the video game, it will be a blast if you like highly thematic games with the above elements.  Perfect for players that seek a memorable cooperative experience where they can also shine as individuals.

The game’s complexity is quite tricky! As a whole, there are a lot of things going on, and you will come across multiple juicy options. Nevertheless, each mechanic is easy to grasp, and once you get a hang of the symbols (which are quite easy – they make sense) the game will just flow. A captivating experience that will keep you focused right off the bat.

With such distinct elements, Darkest Dungeon makes it easy for you to decide whether it’s a game for you or not. From having quirky aesthetics to being a cooperative Lovecraftian adventure. Thus, I know that’s a game I should definitely introduce to my group!

Make sure to check it out on Kickstarter and support it if it’s right up your alley. 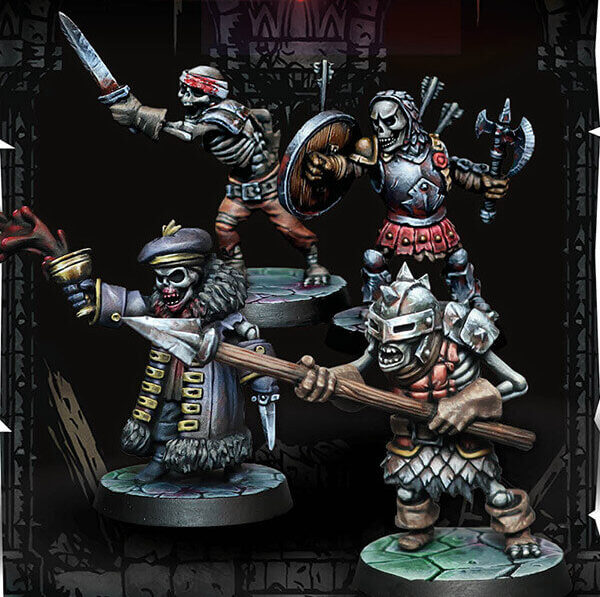 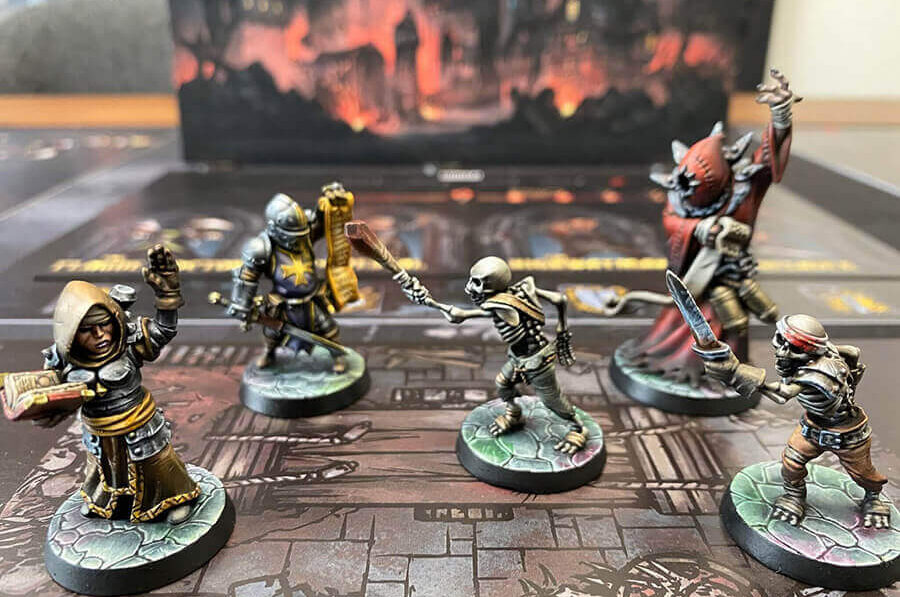 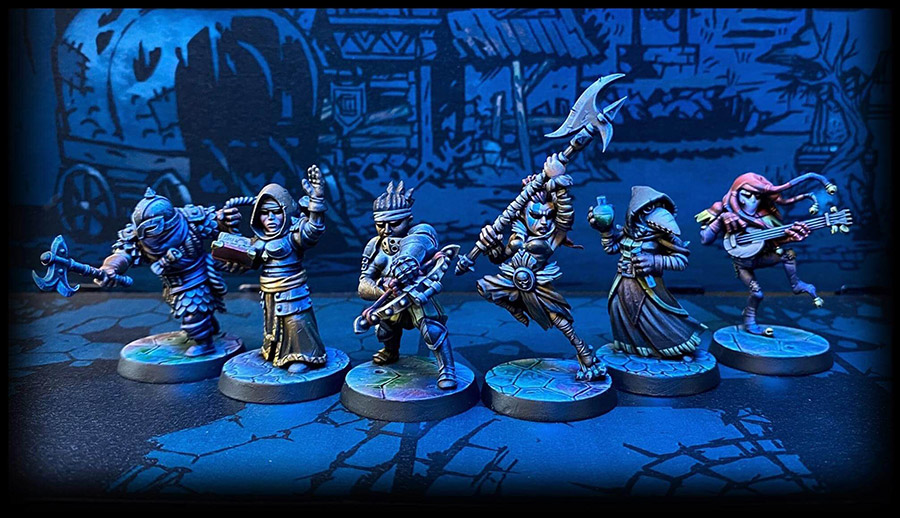 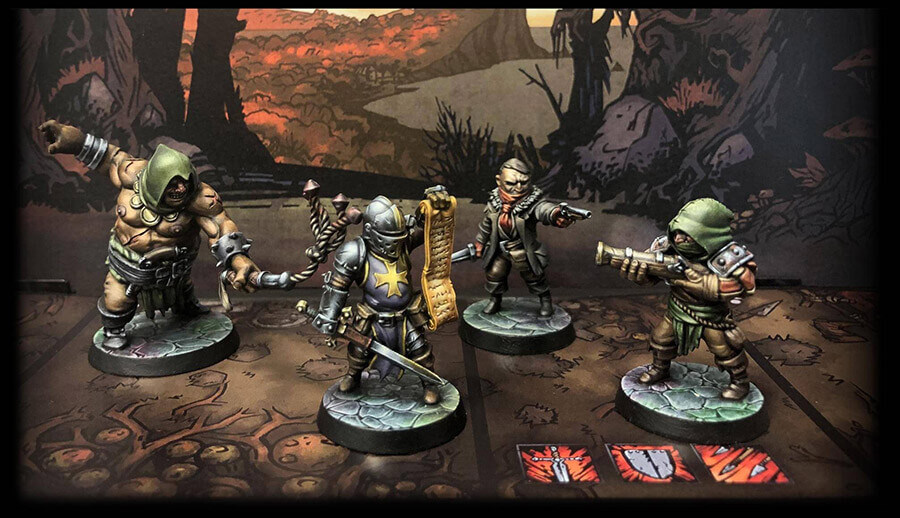 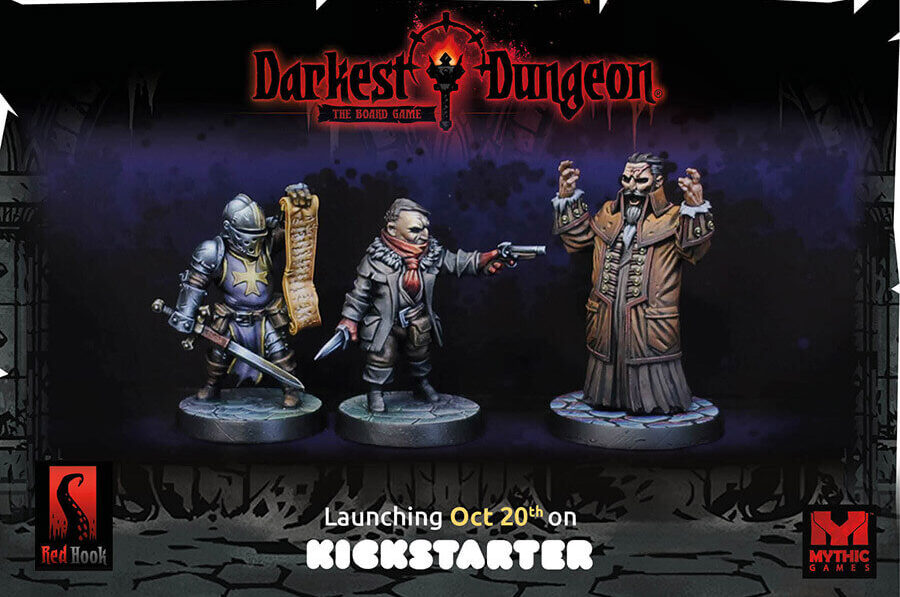 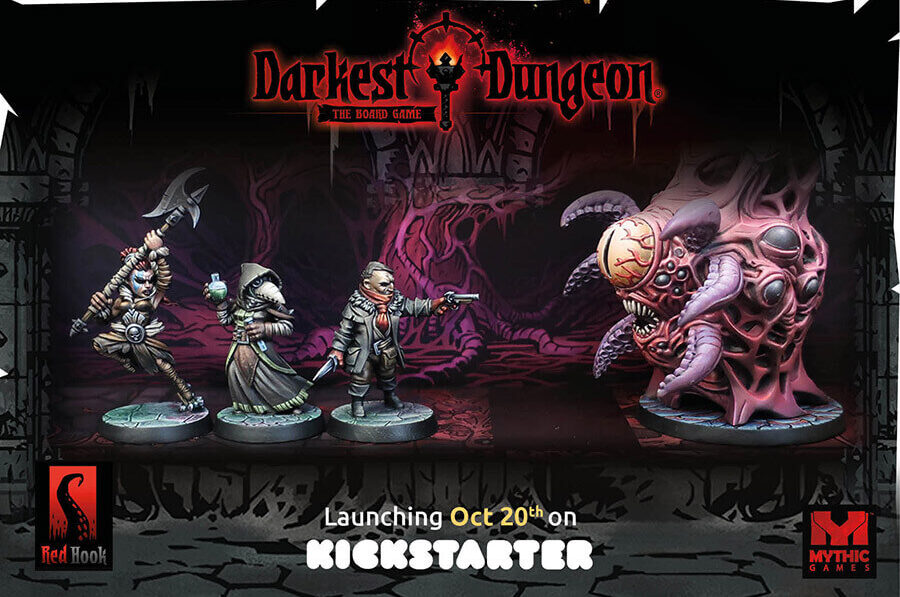 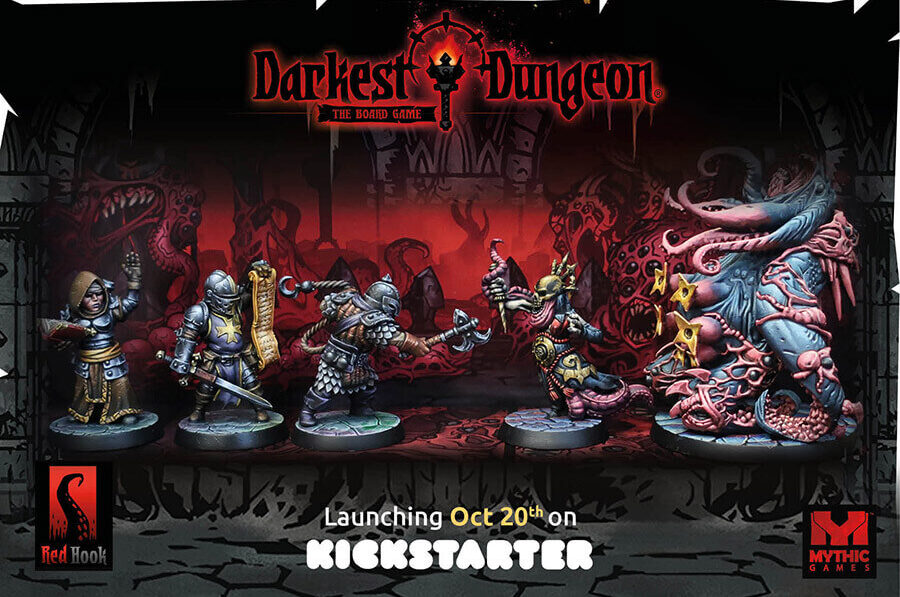