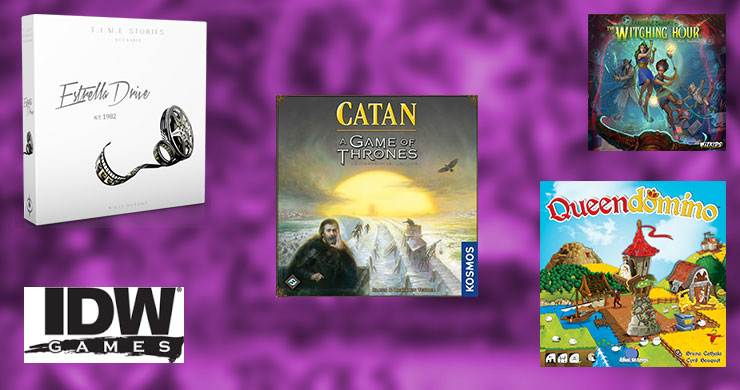 ALL ABOARD: THE BOARD GAME BULLETIN – Ticket 010

If you are a fan of Game of Thrones that also happens to enjoy a game or tow of Catan, then you are in for a treat! Fantasy Flight Games will be bringing us a new flavour of Catan set in the world of Westeros. A Game of Thrones Catan: Brotherhood of the Watch is a standalone game very much like Catan, but has players competing to become the successor of the Lord Commander of the Night’s Watch, all the while taking a stand against other threats beyond the wall. The game will be previewed at this year’s GenCon, followed by a release in the fourth quarter of this year.

A new fantasy-based co-operative game will be coming to stores via WizKids. Approaching Dawn: The Witching Hour, designed by Ken Shannon, has 3-6 players playing as witches working together to banish demons, warlocks, and other evil creatures from entering our world. The catch? All witches are blood bound, meaning your actions can affect the rest of your team, for better or for worse. The game also comes with different missions that, if played in the right order, can form a story arc. The game will be in stores September, but attendees of GenCon can buy an early copy at the con.

IDW Games has entered into a partnership with Nickelodeon to bring some of the studio’s most popular ‘90’s properties to the tabletop. Look for games in the not to distant future featuring Rugrats, Spongebob Squarepants, Invader Zim, Ren & Stimpy, and many others. First on the block is a food-fight themed game fearing all of their properties called Splat Attack!, which will see a release in Spring of 2018.

Asmodee will release a family version of their hit deduction game Captain Sonar, simply titled Sonar, as an exclusive in Target this fall. It is basically a simplified version of the original game, where you don’t need as many players or as many points to win. Another one from Asmodee as they have announced another expansion for T.I.M.E. Stories. Estrella Drive will send your T.I.M.E. agents to 1982 Hollywood to investigate a supposed haunted mansion. An interesting twist on this expansion is, per Asmodee, “only recommended for mature audiences—certain themes within this adventure may be objectionable to younger players”. Look for the release of this expansion the fourth quarter of this year.

Back in 2013, the German deck-building game Kashgar: Händler der Seidenstraßebecame a minor hit, but never broke out internationally due to a lack of translation. Now, Grail Games has signed on to translate it and bring it to English speaking audiences under the title Kashgar: Merchants of the Silk. Look for the game in stores early 2018. Plan B Games has made quite a name out of themselves thanks to the very successful release of their first game Century: Spice Road. Hot off those heels, Plan B will next bring us Azul, a tile placement game where players decorate a palace for a king. The game will make its first appearance this fall at SPIEL 2017.

After winning the coveted Spiel Des Jahres this year, Kingdomino is getting a sequel, appropriately titled Queendomino. Working as both a standalone and expansion, Queendomino will add more complexity to the original game, including adding cities. The new game will debut at SPIEL 2017. Zendo is a popular abstract game that teaches the scientific method, originally released in 2001.

Out of print for many years now, Looney Labs is in production on a new version due early next year. And they would like your opinion on the new version. If you are interested, complete a survey about the new version.