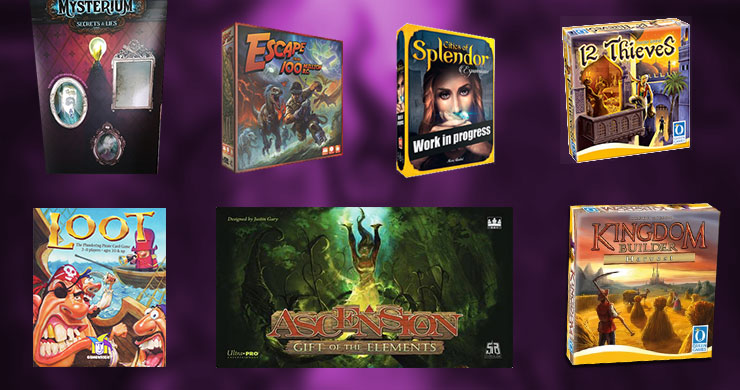 All Aboard: The Weekly Board Game Bulletin – Ticket 003

Are you excited for more Mysterium? You should be, because there’s an expansion on its way! An image is being shared in social media circles showing a banner for Mysterium: Secrets & Lies, which apparently will add more characters and more locations to the base game. The image did come from publisher Libellud, though no official announcement has been made, so keep your ear to the ground for that.

Space Cowboys has revealed they are currently working on a series of expansions for their massively successful game Splendor. Cities of Splendor, which is a working title, will come with four different expansions, all in one box! One expansion gives players something new to compete for while playing, something bigger than the nobles who await your interest in the base game. A second expansion gives you elements to place on cards that represent the cities. A third expansion has a player board on which you claim special powers and twist the rules if you claim certain cards. And the fourth expansion has new cards with special powers that are shuffled into the three decks of the base game.

Arkham Horror designer Kevin Wilson has teased his next project, Escape from 100 Million B.C., coming from IDW Games. It is described as a co-operative game of time travel and dinosaur encounters, as you fix your time machine and return to present day without dying or, worse, creating paradoxes. The game comes with a modular board and historical figures that will help you return home. No official release date yet, but Kevin Wilson suggests it should be in stores this summer.

Queen Games has a busy 2017 ahead of them. They have a ton of reprints coming, including older titles like Metro, Roma, 12 Thieves (formally Thief of Baghdad), Solaris, Captain Silver, Templar’s Journey, High Tide, and Worm Party. On top of that, they are releasing an expansion to Kingdom Builder called Harvest in April, an abstract game called Tip Tap, and a big box version of Escape: Zombie City. Talk about a stacked release slate!

Another busy release slate belongs to Gamewright, many of them coming this spring. This includes Cha-Cha-Chihuahua, Go Nuts for Donuts!, Qwingo, Think n’ Sync, Rory’s Story Cubes Fantasia, and reprints of Tiki Topple, Loot, and PDQ.

For fans of the web series Con Man, created and starring Alan Tudyk, you’ll soon be able to plan Con Man as a game. Catalyst Game Labs will release the game in stores this spring, where players play as friends of Wray, the lead of the show played by Tudyk, helping him recapture his career.

Yet another entry in the Ascension deck-building series from Stone Blade Entertainment and publisher Ultra Pro. The eleventh in the series (!!!) is called Gift of the Elements, and is expected in stores early 2017. No details have been released for the game yet.

And finally, in an attempt to turn a negative experience into something positive, two kids from Virginia created a board game as a school assignment that tackled the timely and sensitive subject of immigration, which caused a bit of controversy at their school. So instead of walking away from it, they continued developing it, turning it into a fully fleshed out board game and app with the support of crowdfunding. You can read more, here, and to support their game, you can contribute here.