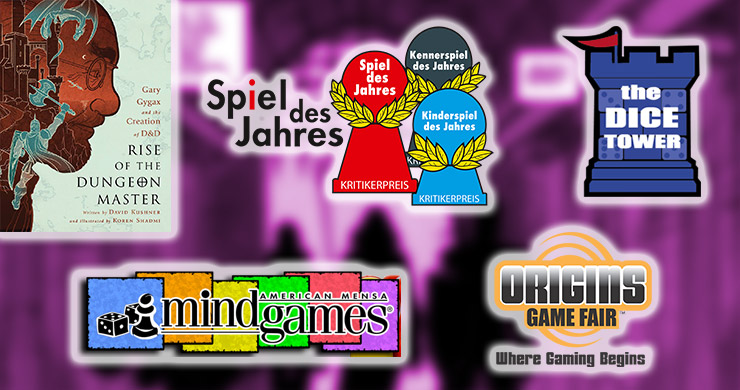 All Aboard: The Weekly Board Game Bulletin – Ticket 008

– Raiders of the North Sea

Additional recommendations for the game of the year status include DEJA-VU, Dodelino, Fabled Fruit, KLASK, Shiftago, Tempel Des Schreckens, and Word Slam. Additional recommendations for the connoisseur-gamer game of the year status include The Big Book of Madness, Captain Sonar, The Great Western Trail, and The Grizzled. Winners will be announced this summer.

The Origins Game Fair have also announced their nominees for their 2017 awards. Run by The Game Manufacturers Association and held in Columbus, Ohio every June, the Origins Game Fair has become one of the best gaming conventions in the world, also awarding games for decades. They award games in several different categories including family games, traditional card games, miniature, collectables, and even accessories. The extensive list of nominees can be found here, but the list of best board game nominees are below, with winners announced at the convention:

– A Feast for Odin

Another set of nominees, this time from The Dice Tower. They have a ton of nominees in all kinds of categories, which can all be found here. Their nominees for Game of the Year are:

– A Feast for Odin

And yet more awards to announce from Mensa, who recently held their Mensa Mind Games event where they announced their Mensa Select games of 2017. Those winners include Amalgam, Around the World in 80 Days, Clank! A Deck-Building Adventure, Harry Potter Hogwarts Battle, and the party game Imagine. Mensa Mind Games is a marathon board game judging event held every year since 1990, and past winners include Dominion, Taboo, Fluxx, Forbidden Island and Desert, Magic The Gathering, and Lantern, to name a few.

The last bit of news this week is neither award or board game related, but still of interest to members of the gaming community. Out now in stores and online is a graphic novel biography of Gary Gygax, creator of D&D and grandfather of tabletop gaming. Rise of the Dungeon Master is written by David Kushner and illustrated by Koren Shadmi, and offers a unique telling of the story, putting the reader into a first person perspective not unlike the classic tabletop RPG.