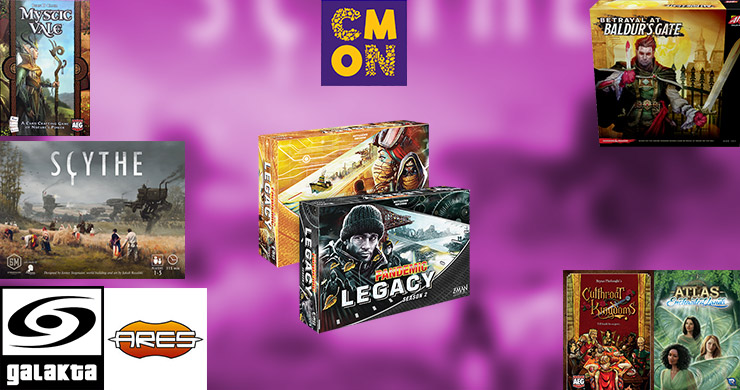 All Aboard: The Weekly Board Game Bulletin – Ticket 009

All aboard fellow gamers,
Galakta is the board game company based in Poland that’s behind some European hit games like This War of Mine, Age of Thieves, Zombie Terror and Andromeda, as well as many others. Unfortunately these games have never made the trek across the ocean to find an audience, but all of that is about to change thanks to a new partnership with Ares Games, who have agreed to release Galakta games in North America. Nice to see this partnership blossom after first starting years ago when Galakta started releasing Ares titles in their territory.

This fall, Renegade Games will be releasing the new game from Sentient and World’s Fair 1893 designer J. Alex Kevern. This fantasy-based card game called Atlas: Enchanted Lands will have players play cards that reveal a time and a space, where they then have to predict the next set of cards to be played as the world is uncovered. Artwork is done by Beth Sobel of Lanterns fame. More news from Renegade Games and they have signed on to release this year’s Kennerspiel des Jahres nominee Raiders of the North Sea in North America. The Viking warrior game was Kickstarted in 2015 and went on to become a massive hit. Look for it in North American stores this summer.

Another new game, this one from AEG called Cutthroat Kingdoms, coming to stores in August  with a special preview at GenCon. This social deduction game take a page from Game of Thrones, where players represent kingdoms vying for control vacated by the recently deceased king. The game is also a little open ended in that every group will create their own rules for each game. The game is designed by Bryan Merlonghi. Jon Gilmour, of Dead of Winter fame, is at it again, currently designing a new cooperative game that exists in the Wayward comic universe. No word yet on the game itself or a release date, but it will be published by IDW Games, and will closely involve Jim Zub and Steven Cummings from the Image Comics series.

A board game crossover is in the works as Wizards of the Coast and Avalon Hill have joined forces to bring us Betrayal at Baldur’s Gate this October. The game combines the mechanics of Betrayal at House on the Hill with the world of Dungeons & Dragons, a clever spin that is sure to win over fans of both properties!

CMON Inc. have recently announced they will be adopting a Minimal Advised Pricing Policy, a similar policy adopted by Asmodee and Privateer Press. This means all game will have a minimum price retailers can advertise their games at, allowing for a more level playing field between FLGS and online retailers. This change is currently in effect.

And for those waiting with baited breath for the next season of Pandemic: Legacy, which was teased last year, you can finally expect it in stores this fall. Keep your ear to the ground for more
information on this one from Z-Man Games.