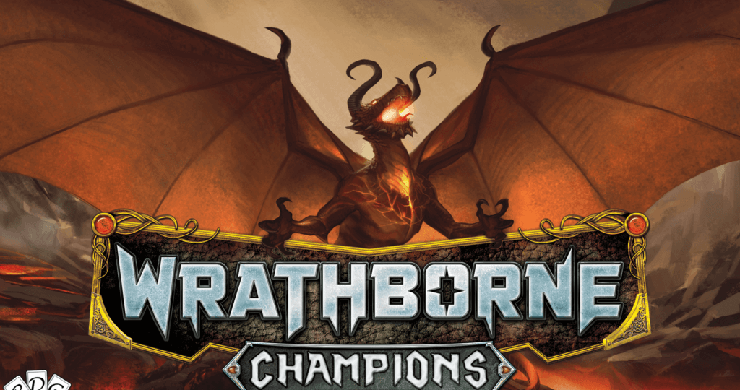 The Minions of Wrath are coming full of hate for the world, aiming at destroying it. You and your friends are the Wrathborne, a team of the strongest fighters the world has ever known, which the gods have chosen to exterminate those massive monsters.

When the game starts, players create a deck that features the abilities of their class, the attack characteristics that correspond to the weapon they have chosen and some customizing items. This deck represents both the players’ actions and their life total, since any damage taken is applied to the deck itself.

As for the Minions of Wrath, they are represented by puzzles that are made up of nine different sectors. In order to win, players will have to hit the Minion piece by piece until it is too weak to hit back. Of course, Minions are not the same and they require different kind of strategy and planning on the players’ part. When fighting a Minion, you must also beware of the Wrath Token, which moves around the board and determines which hero is going to face the Minion’s wrath.

Defeat each one of the Minions that stand in your way and you will be victorious!

Wrathborne Champions is a fully cooperative board game for both casual and hardcore gamers. It has been funded on Kickstarter and the campaign is set to run for another two weeks.

What follows is the interview with the creators of Wrathborne Champions! Stay tuned because we are going to have a giveaway of the game right after the Kickstarter Campaign!

What inspired you to make “Wrathborne Champions” and especially the structure of Miniboards which personally got me truly excited about this game?

We are huge fans of video games, in particular MMORPGS like World of Warcraft. We used to spend hours and hours each week preparing for raids so we could go off and battle massive bosses. However, as we have gotten older, we found fewer and fewer hours available in the week to play games like this. Family obligations, work obligations, and just general daily responsibilities made that sort of time investment more difficult.

We wanted a game you could play in an hour or two that will still give that same, epic feeling, but without all the upfront time cost. Additionally, we wanted a game that would allow casual and hardcore players to have fun at the same time, something high-end gaming rarely permits. This was the major prompting behind us making Wrathborne Champions.

Once we decided to make this sort of “boss fight in a box” game, we had to choose exactly how players would fight the boss monsters and this is when another video game influence came to play.  Stretching back to the original game on Playstation 2, we have been die hard fans of the Monster Hunter series.  In these games, players battle massive dragons, dinosaurs, and other beasts with some fights taking the better part of an hour!

One of the big parts of good Monster Hunter play is dismantling the enemy piece by piece, as opposed to just hitting the same place over and over again. You get more rewards if you break the enemy’s horns, or cut off their tail. You can prevent attacks from happening (or at least make them less effective) by breaking talons or exhausting your foe. Our love of this series is what lead us to making our Minions of Wrath multi-sector miniboards.

Each sector on a miniboard has its own life and performs its own actions.  Players need to look at the Minion of Wrath and cooperatively figure out what order they want to beat each sector to assure victory. This makes each of our enemies a unique combat puzzle that players have to contend with, requiring cohesive play to best take advantage of the cards in hand and your group’s chosen path to victory.

This is actually a point where the MMMO inspirations come back as well.  When fighting a raid boss, you know what things will happen during a fight (generally speaking). At X life, the monster will enrage. Stay out of the fire. If you get this debuff move over here.  These sort of things are static and predictable, letting a good group learn a monster. Our Minions of Wrath actions are set so each and every round, the party knows exactly what is going to happen to them when they get attacked, encouraging not only aggressive play, but also defensive and support play based on what damage is incoming and who will be hit.

As I alluded to earlier, we designed Wrathborne Champions to be very casual friendly while still having enough meat for a hardcore gamer to enjoy themselves.  All of our cards are written in plain language, and all use very simple math (or no math at all), so you don’t need to memorize a bunch of new words/terms or be proficient at advanced calculations. We want players of any skill level to have fun together and I believe we have created a system that achieves this goal.

Regarding experiences, all of our skills and abilities are very grounded and thematically consistent so we are hoping it will encourage players to make their own stories that they can talk about later.  An example would be:

“So our group was getting destroyed by the Dragon’s breath and things were looking bad.  Then, the Assassin over here vanished! We all just thought, ‘of course, you’re safe but what about the rest of us?!’ That turn the Dragon just wrecked us, but the next turn the Assassin popped out of stealth and did double damage with the bow right to the thing’s head completely shutting down the fire attack! It was awesome!”

We want people to be on edge. We want them to be challenged. But most importantly, we want them to have fun together, all working towards the common goal of surviving and beating their enemy. The great part about Wrathborne Champions is that sigh of relief after you overcome the impossible odds and come out victorious.  It’s pretty awesome.

What was the greatest challenge you faced during the designing and development of the game?

I think our biggest challenge in creating Wrathborne Champions was learning when to let things go. All designers have things that I call “sacred cows”; these are things they absolutely love about their games.  Maybe it is the first thing they came up with. Maybe it is a really clever title or mechanic that they are particularly proud of. Unfortunately, many times these “sacred cows” are actually not good for a game’s long term success and they need to be cut for the betterment of the game as a whole.

One of my “sacred cows” in Wrathborne Champions was how we tracked Minion life on the miniboards. Originally, we used these little minicards placed on each sector and when damage was done, you simply drew that number of cards off the top of the stack.  Additionally, each of these cards had either blanks on the other side or some random effect that would go off when the damage was revealed.

I loved how it gave a verticality to the game board and I really enjoyed the feeling of working with the cards. However, I was absolutely in the minority; all of our testers hated them.I eventually had to let the cards go and find a different way to tackle the problem; there were simply too many negative comments about them.

This led me to come up with the current method of tracking life with the two color gems and the creation of the Battle Deck to control all the random elements of the game. I certainly didn’t want to come up with this idea at the beginning, but there is no denying how much better the game is now.  Not only is the flow better, it is easier to manage, cheaper to make, and it let us assign random effects to ALL player actions, not just “doing damage”.

It was a total win for the quality of the game, but it was a hard lesson to learn regarding the need to get rid of your “sacred cows”.

What is your favorite element/mechanic of the game?

I think the Wrath Token is my favorite mechanic in the game.  When we decided we were making a cooperative game with the players battling a “big bad”, we were stumped on how to determine who the Minion of Wrath is targeting.

You see, I’m a video gamer at heart and hadn’t ever heard of a “first player token” when we started designing Wrathborne Champions!  What inspired the creation of the Wrath Token was actually me watching competition poker on TV.  In competition poker, the dealer is not a player, so there has to be a tracker moving around the table showing who the current “dealer” is for both dealing and betting purposes.

This “Dealer Chip” was the perfect solution to our problem and I quickly mocked up all the Minion of Wrath abilities to either focus on this token, or be relative to it.  We then got player abilities (like the Warrior’s Taunt) and random effects (like Draw Ire) to play with this new “Wrath Token”, both giving and removing player control over who the Minion of Wrath is focused on.  It might seem like an obvious twist on a first player token to a seasoned board gamer, but for us it was pretty revolutionary.

This is your second game as “Randover Games”, what else can we expect in the future?

Oh man.. so much!  We currently have 6 more classes, 6 more weapons, and 12 more miniboards in production/testing for Wrathborne Champions.  This is in addition to multiple little add ons for the game promoting solo play, higher levels of challenge, and even ways for players to customize their copy of the game.

Ever since we came up with the Ember Dragon, I’ve also really wanted to make a Giant Mech version of Wrathborne where players take on massive mechanical menaces! I’ve also been interested in exploring steampunk, horror, and even starship battles with the system.

Outside of Wrathborne, we have a sequel for our first game, Cast & Capture, in the works. We also have a great little card game called Nim’s Bounty where players are a pirate crew under Captain Nim and they have to divide up a pile of stolen treasure.  People can actually get an advanced version of Nim’s Bounty in our Randover Game Pack on the Kickstarter.

Our one defining goal with all of our games is, “to make things that we want to play ourselves”.  I think there are a lot of amazing designers making great games out there, but if I ever want to play the game I have sitting in the back of my mind, I’m going to have to be the one to make it!  So long as we are still enjoying the process and there are people that like our games, we will be making them. You can count on that. 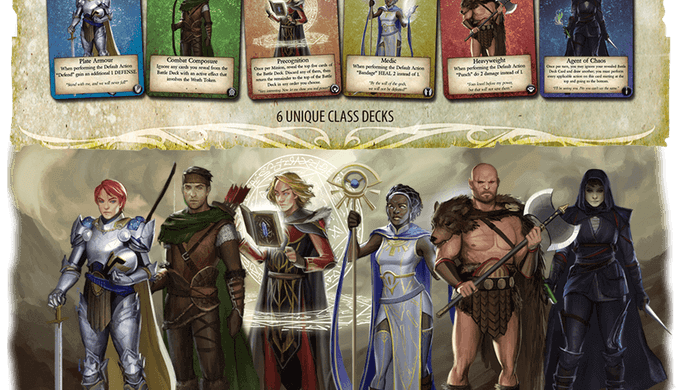 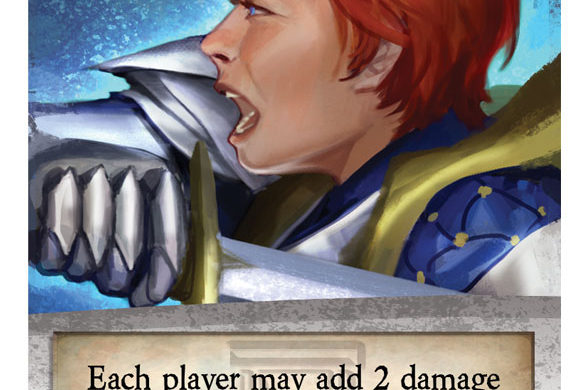 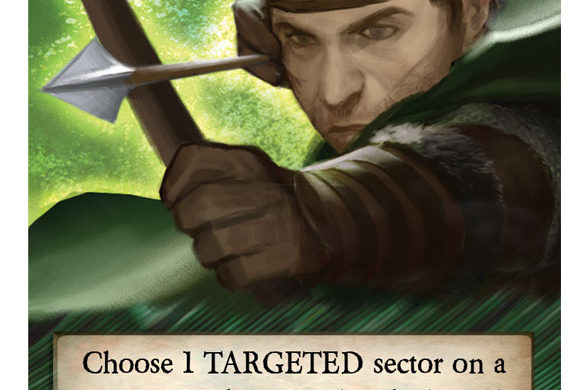 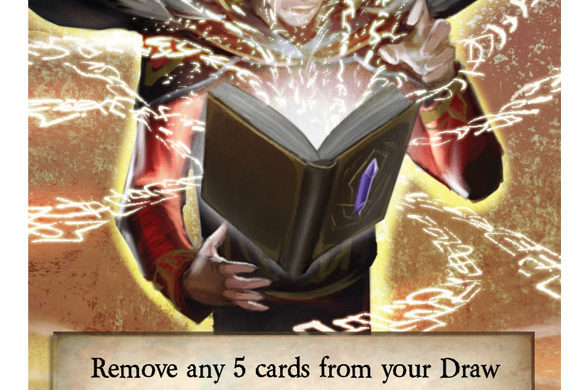 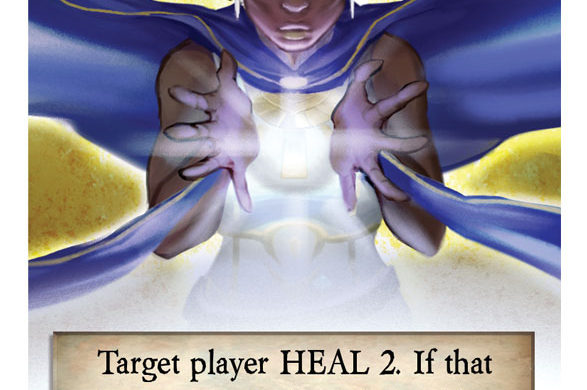 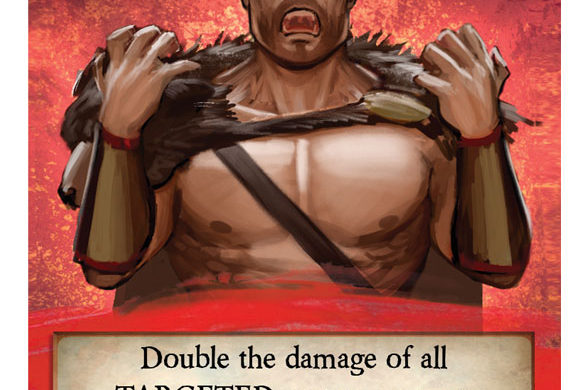 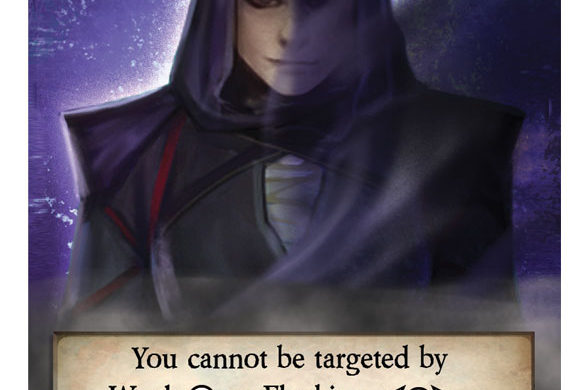 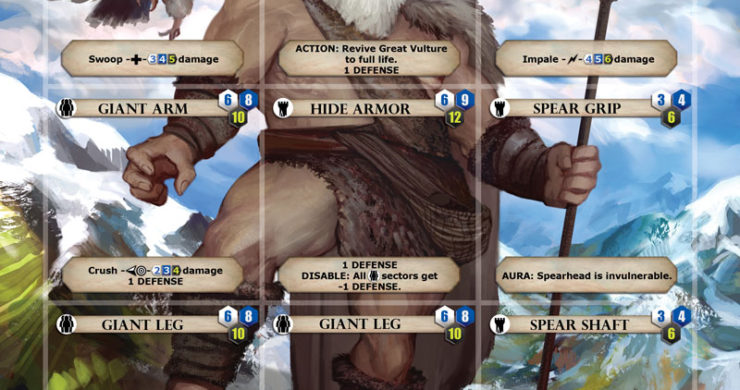 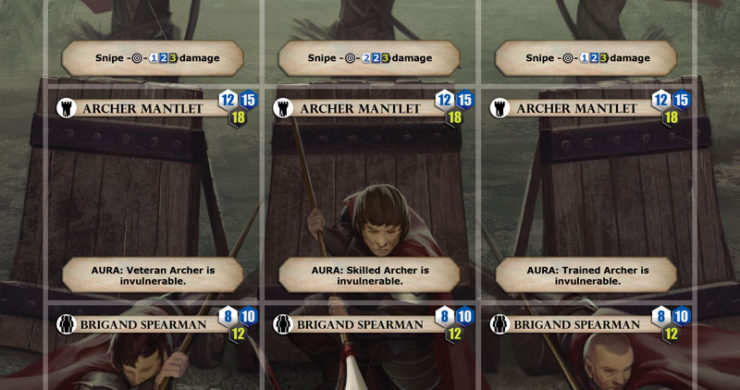 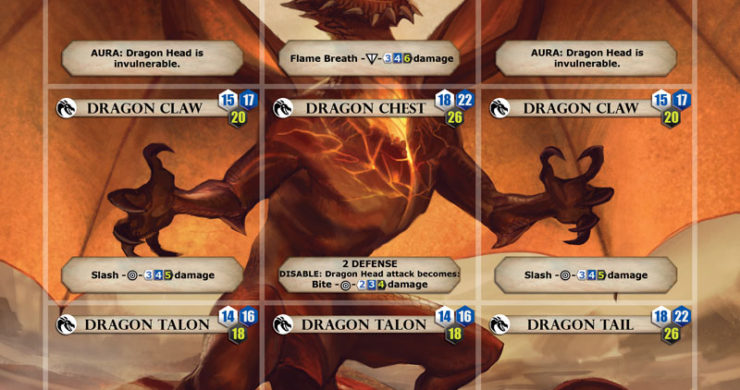 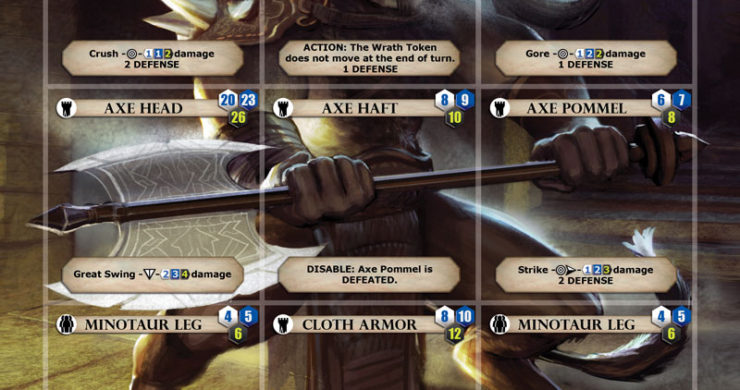 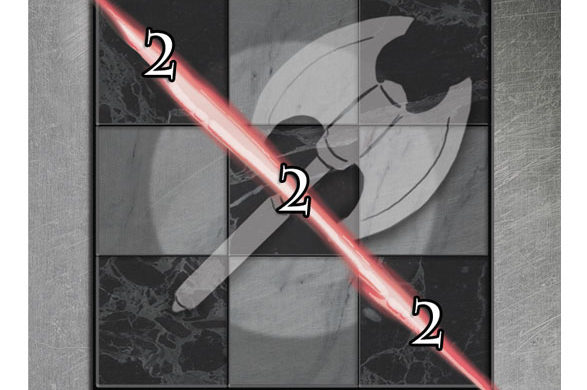 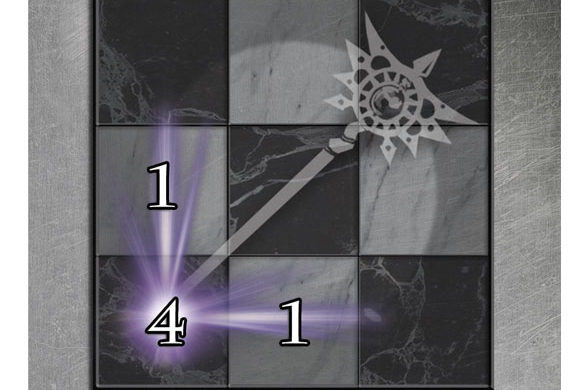 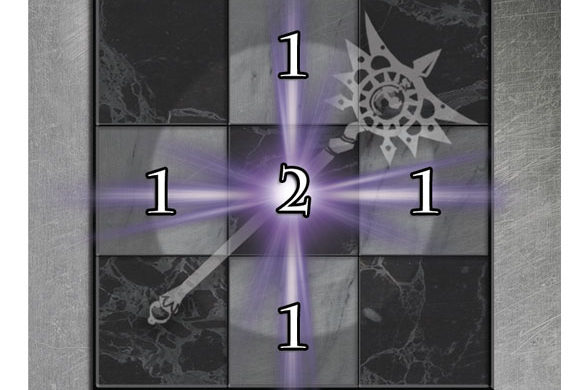 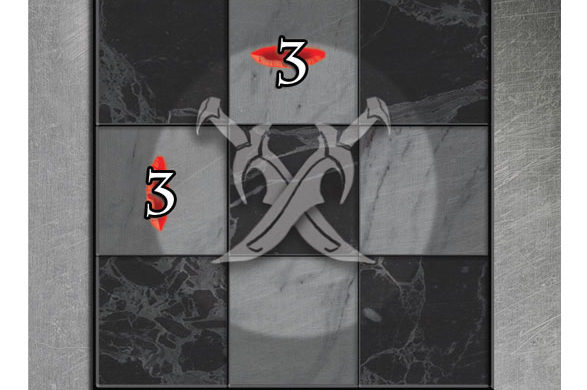 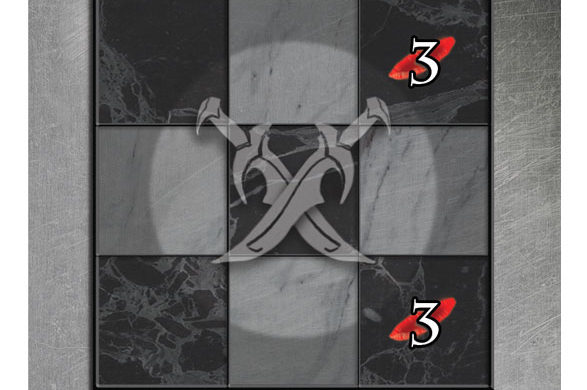 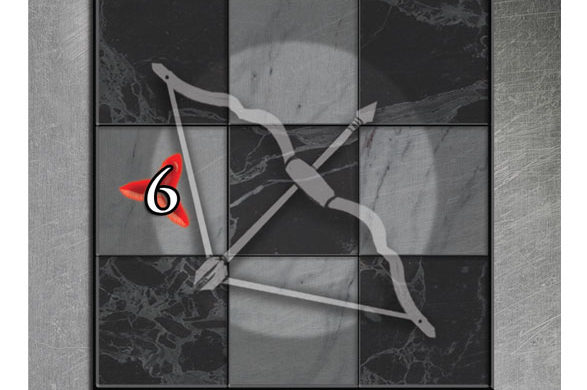 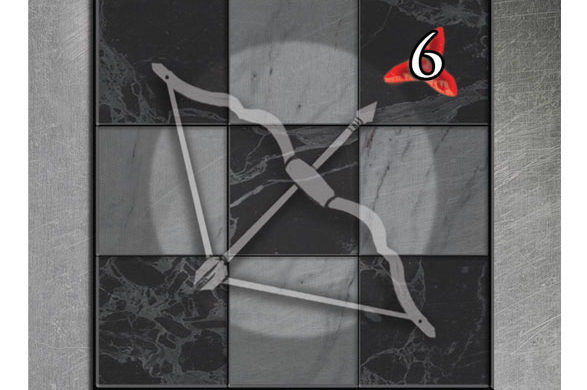 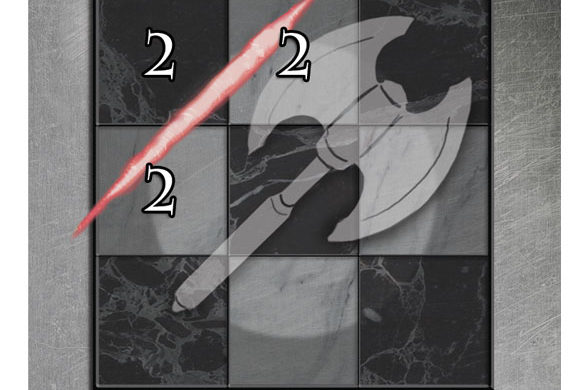 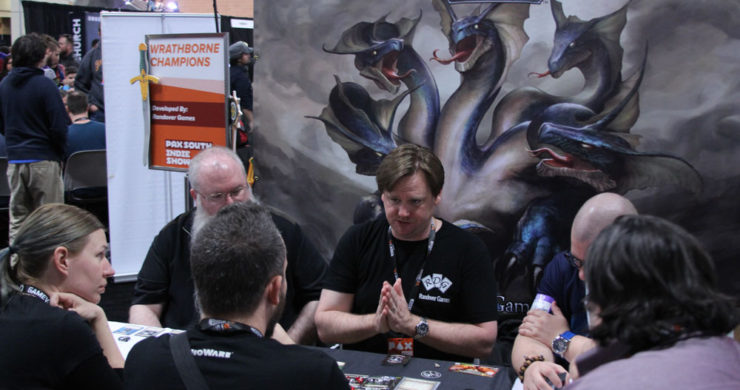 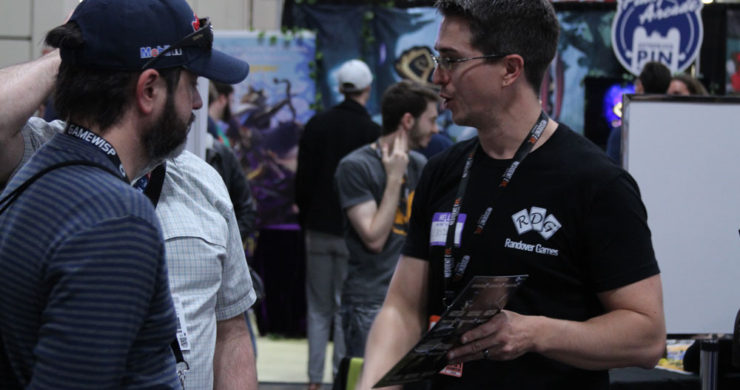 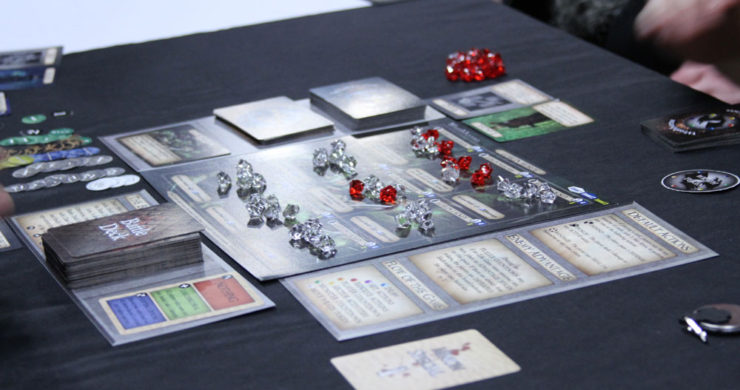 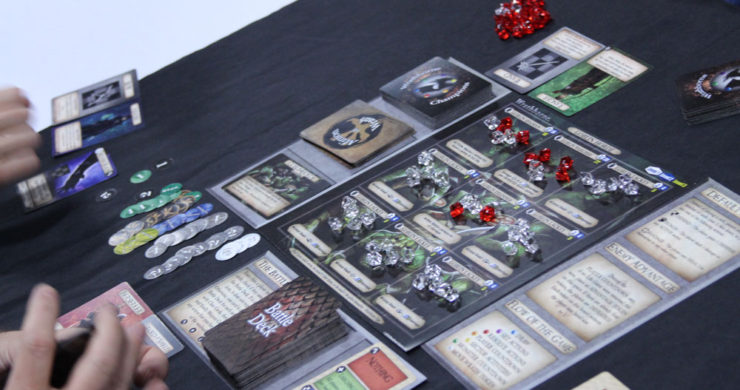