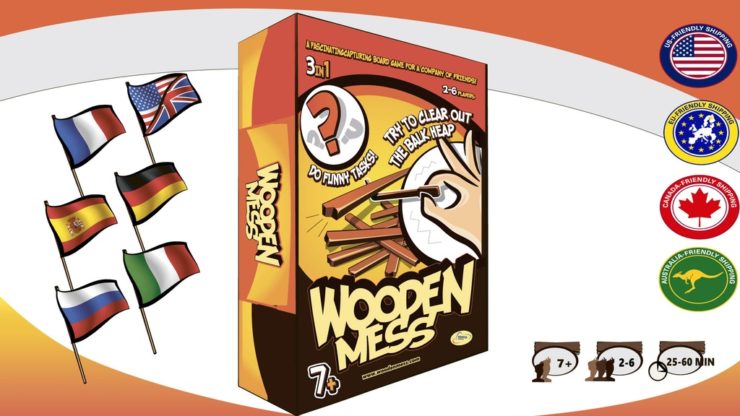 Wooden Mess is a new dexterity party game that just launched on Kickstarter, all made of natural wood!

The game comes with 40 wooden cards which have a funny task in one side, 33 wooden sticks and a shovel for each player. The goal of the game depends on which of the 3 available modes you choose to play with.

In the first mode, you will throw all the sticks together at the center of the table and on your turn, you try to take sticks with your shovel without moving the pile. If manage to take a stick out, you gain it and the person on your right draws a card. In case you move the other sticks, your turn is immediately over. Play continues clockwise until the pile is cleared! Then, the game continues through a second phase, in which all players get to perform the tasks written on their cards with the purpose of creating funny moments and a positive experience.

The second mode is the safe but without the second phase. In that case, the player who managed to claim the most sticks is the winner of the game! The third and last mode is to only play with the cards, having a good time and maybe combine it with some booze or a party-event.

The game will have various editions, such as with NSFW content and a full custom kit for you to get creative or have it for a present. The basic game will be at $25, $4 lower than the MSRP.
This game is certainly not for everyone but at the same time it has a distinct identity, you know what you are getting. I see kids, teenagers and students having a good time in a game night or party with casual games just to have some fun with a combination of dexterity and “dare or truth” concept.
Check out Wooden Mess if interested to know more. 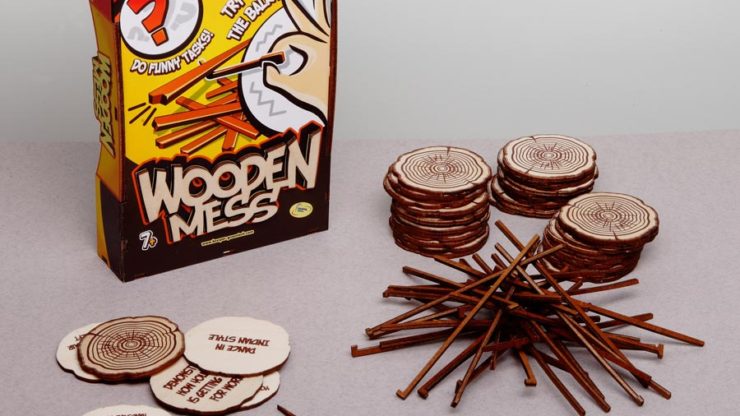 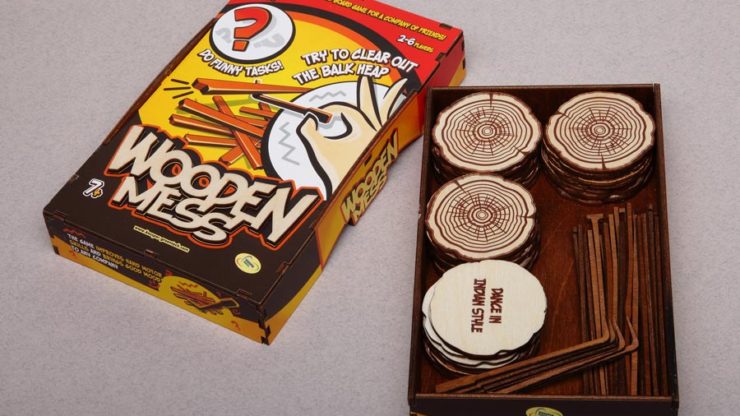 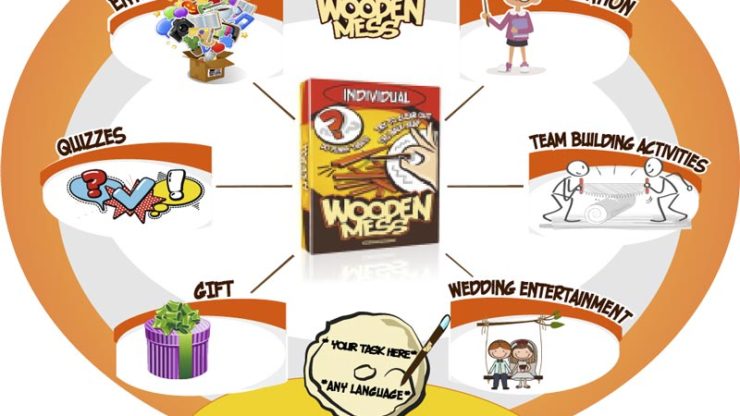 Wooden Mess is a super capturing physical skill  board game made of natural wood. Starting today, anyone can back Wooden Mess on Kickstarter on the same crowdfunding platform that helped to bring such a blowing game as “Exploding kittens”  to entire world 3 years ago.

Breathtaking moments, lots of laugh and the extreme portion of craziness is guaranteed by this new game  called “Wooden Mess”, in which players have to show the agility to clear out wooden sticks from the heap and perform funny tasks in the end. Its humor-filled atmosphere will not leave anyone in the family or company either alone or sad. The game is 3 in 1 and 20-60 min to play, which means that buying WM you can choose which option to play. The first option invites you to try and clear out the balk heap as well as do funny tasks prepared for you. The second option gives you a chance to clear out the balk heap without section cards, while the third option urges you to simply take out cards stylized as real stumps in turn and do the funny tasks.  The first core option is the most exciting one. Here, 2 to 6 players join together, put stumps face down and choose up one who will throw a balk of sticks in a heap on the table. The next player with a shovel clears out the balk heap so that none of the balks moves. If one manages to do so, his rival before him gets a card with a funny task. The game develops and gets more intense with each wooden stick and wooden card you draw because in the end all players will count their wooden sticks or perform tasks.

”The Wooden Mess” is a unique project on Kickstarter because we give our backers an opportunity to participate not only in the campaign, as it usually happens, “just buy and leave or unlock the achievements and receive special bonuses”, but also from Day 1 we give them space for creativity expecting backers to also become a part of our team, share the same effort and create with us their own, personalized game and additional cards in any languages they would prefer. We would like to make some fun together with our supporters, that’s why we’ve developed Individual stand-alone game with free space cards and an erasable pen for unique backers´ tasks and Regular game 7+, NSFW 30+ versions with prepared tasks from our team. Moreover, Individual edition of Wooden Mess will be a perfect gift for friends and family or a useful tool in education process.  With Wooden Mess, we could not think a better way to share this hilarious game and we believe that we have created the new cultic board game which will find its place where people prefer laughing, joking and having fun. We believe this game combines all the best that a board game can offer: entertainment, activity, education, agility and funny atmosphere,” said Serge Keselman, 23-year-old co-founder.

“No doubt that Wooden Mess will be the next must-have game,” said early test players.

Following on the success of crowd-sourced Kickstarter campaigns, Wooden Mess contributions start at $25 with free-shipping in the US, with backers gaining playable Regular Wooden Mess game 7+ , NSFW 30+ version and Individual stand-alone game from $35. As the campaign proceeds, Kickstarter contributors will unlock some stretch goals which include: a change in the rule-set to make the game more interesting, additional cards, Regular and NSFW versions will be released in 6 languages for all backers for their choice at any pledge level once the campaign hits 60.000 backers.