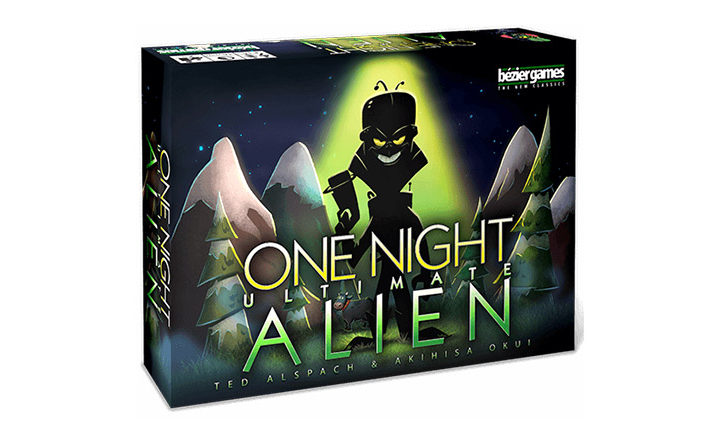 One Night Ultimate Alien – The Aliens Are Here!

This is another game to be added to the award-winning hidden role blockbuster One Night Ultimate Werewolf series!

This time, Aliens have come to your village, bringing with them the latest technology and aiming at conquering the earth. As in the previous games Daybreak and Vampire, each player takes on a different role and every character has to do a special action in secret, while players must also find out who among them are the Aliens. The thing is, roles can change and that means that apart from detecting the bad guys, you must figure out what role you are as well! So, there is a dynamic change in roles and even with the same roles in play, the game can be different every time you play.

One Night Ultimate Alien features several new roles with dynamic rule sets, while the app alters each game. It can be played as a standalone game or it can be combined with the original game, the Daybreak sequel and the Vampire prequel. The updated app provides the ability to select any combination of roles from each of the games and will narrate them in the correct order for you.

When every player has been given a role, the app reads instructions for everyone in a certain order, during which all players have their eyes closed. These instructions are specific to each role. At the end of the night, everyone opens their eyes and takes about 5 minutes to discuss among themselves who the Aliens are and then they vote. The player with the most votes reveals their card. If it is an Alien, the Village team wins. If not, the Alien team wins!

One Night Ultimate Alien has been launched on Kickstarter where you can back it!