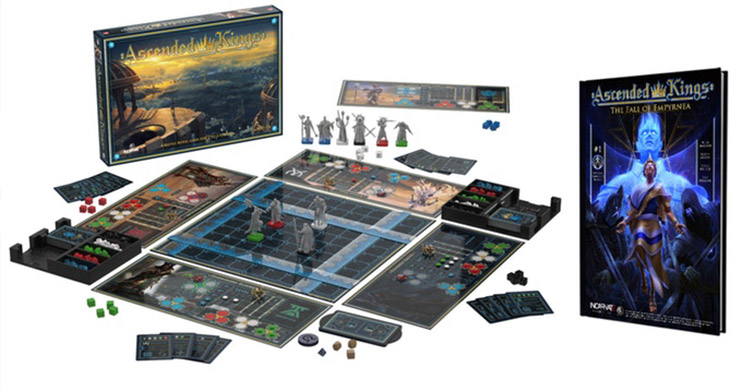 The relaunch of “Ascended Kings” is here with an updated campaign and new lower price. The first game of “Incarnate Games”, transforming Art into Play. For those not already familiar with the game, we will go over a quick overview so you can tell if it appeals to you.

You take on the role of one of the Ascended Kings that battle for dominance and a chance to get their hands on the Omega Stone, a symbol of ultimate power!
The interesting part is that in the campaign you have the option to get your hands on a 60-pages comic book of the game, featuring an original story set in this universe and centered around the four kings of “Empyrnea”. I have to mention that its illustrated by Renae De Liz & Ray Dillon, artists from GOT and Legend of Wonder Woman.

The hardcover fantasy novel is not needed to play the game but it can surely be used to enhance your game experience and let you dive in further into the story behind the arena.

Your goal, as an Ascended King, is to collect all the 4 bloodstones that are distributed among the contestants which can be used to claim the Omega Stone for yourself and ultimately win the game! It’s a one to two-hour game so I will give you a gameplay overview and not get into rule details, so you can get the feel of it.

When you read about deadly fights in an arena the first thing that might come to mind is the possibility of elimination, getting slaughtered and be on standby, waiting for other to end their game. That’s not the case in this game, as you can`t get eliminated but only come back as a “Revenant”, changing your form and gameplay structure.
You will have your personal board in which you will manipulate your resources, energy Gems that will generate all your actions in the game. There are four available type of Gems, “White”- “Green”- “Red”- “Blue” and a fifth one, “Black”, called Dire. Dire works in a negative manner, as you acquire them when getting damaged and it blocks spaces in which other, useful Gems, could be stored. In addition, you get to die when having a certain number of Dire wounds, depending on your current level (1,2 or 3).
Each other Gem has a certain type of use, generally:

Ylem (Blue) – It’s like your mana, letting you use more powerful moves and actions.

The basic sequence of play on your turn is the following:

The game enters the “Omega War”, which is the final Rounds of the game when either a player has the 4 Bloodstones on their possession or a certain number of Rounds have passed. Then, the Omega Stone appears and if you land on it while having all the Bloodstones, you immediately win the game. In the occasion that no player has all the stones, a final scoring takes place, an alternate way to determine the winner.
The gameplay, especially the last few rounds, can be really intense, going back n forth, making choices that matter and feel the fire walls threating you as they proceed closer.
The campaign comes with the “Limited Collector’s Edition” which is a nice chance if you are interested in the game and maybe combine it with the beautifully illustrated novel. The price point is much lower than the previous campaign and the shipping cost is one of the lowest you may find.

If you read something you like, make sure to check out “Ascended Kings” campaign here! 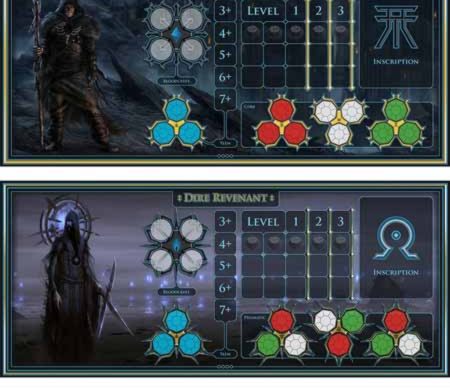 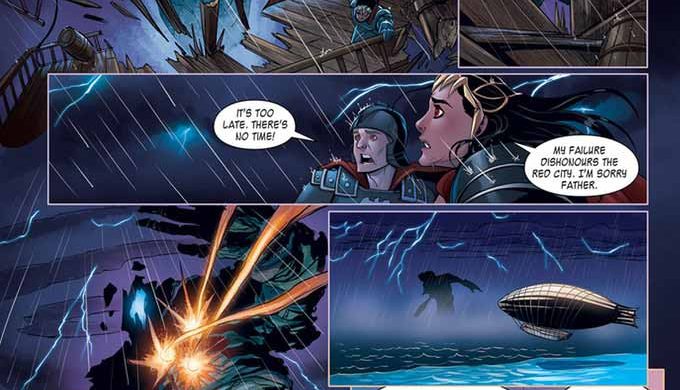 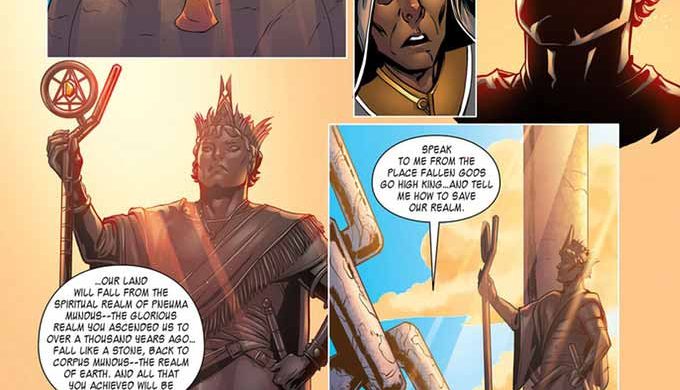 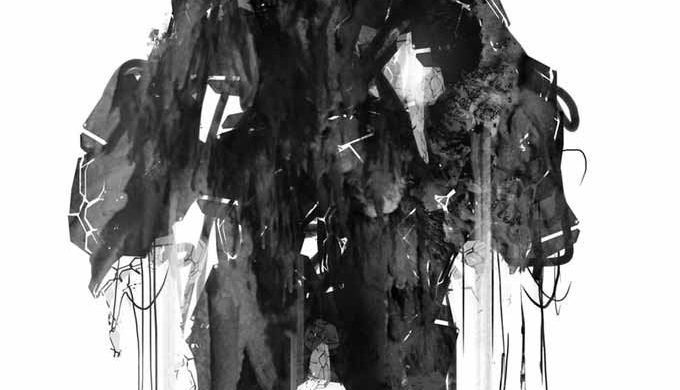