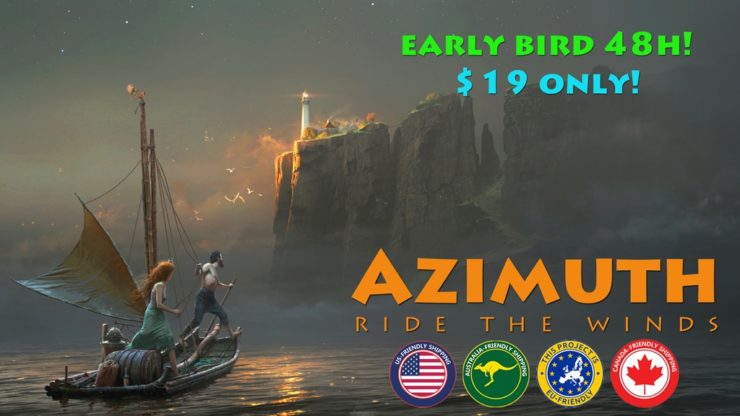 You take on the role of a survivor floating at the sea’s heart, striving to return back home. Rafts being your hope and wind being your friend, you set forward with the goal to live and share your story!

Your goal is to be the first castaway to reach their lighthouse, returning safely home.

You start the game by setting up the main board which varies according to the number of players.
The main pieces in the game are the survivors, the rafts, the winds and a lighthouse, in each color. Getting your survivor to the corresponding lighthouse will give you victory. Rafts are the path to survival and wind the way to create and manipulate this path. Survivors are placed inside the board and in some cases on a deserted island, rafts are placed randomly in a pattern and lighthouses at the edges of the board.

The game essentially takes place in two phases. On the first one, you place your wind tokens in clockwise order until all tokens are placed on the board. On the second phase, you can rotate a wind by 90 degrees or move it on an adjacent space.  Using a wind token by placing it, moving it or rotating it, results in moving all adjacent rafts of the same color towards the depicting direction by one space. This may result in raft stacking, which is one of the aspects adding to the tactical moving element of the game.

Furthemore, instead of taking a wind action on your turn you may take a castaway action to move your survivor on an adjacent raft. In addition, when a raft with a survivor on top is moving, they move together so it’s an indirect way of moving while using a wind!

There are ways of using an opponent’s wind instead of only using your own. This is possible only when having one of your rafts adjacent to such a wind and you can only rotate it. Thus, you can only take such an action during the second phase of the game. In a 3 or 4 player game you can also use the coconut tokens which limits the number of times you can control an opponent’s wind.

Reading the rules gave me a “taste” of the game and what to expect. For me, there is a unique theme/situation that makes sense on top of an abstract game. Furthemore, the use of only one action out of 4 or 5 options makes it easy to learn and play, which is a plus. Deep but simple, this is what they promise and I see no reason why that’s not the case on this one. Solving puzzles is one of my favourite aspects in gaming so I would recommend to check this one if you like that as well!

Azimuth: Ride the Winds  is live on Kickstarter, where you can find more details about the game. There you will find a variety of pledges, for multiple copies as well as getting more of their games. But the most interesting pledge may be the 24-hours early bird which you may still find available now!