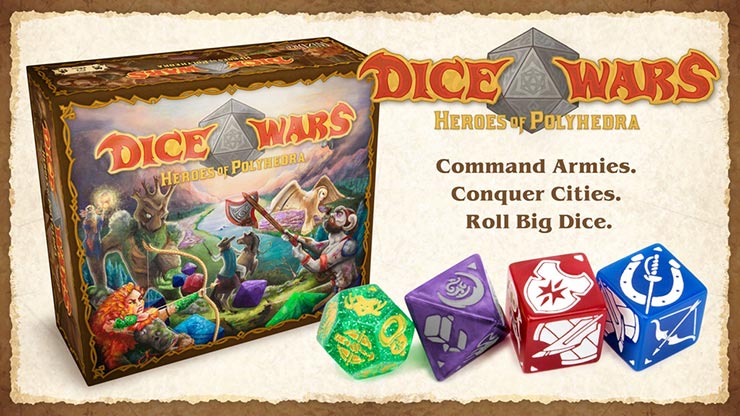 A self-published Kickstarter campaign by Wiz Dice I believe, created by “Brybelly”. It caught my attention as it contains dice, custom dice, big dice and it’s named Dice Wars! I love dice, like many of you so I had to check this one out. Unfortunately, the one downside that I came across really early was that I couldn`t find basic information about the game like the designer, an entry in the database or the artist. These must be accessible information by anyone who checks out your campaign at a glance, like how much does it take to play.
But let’s check out how the game rolls, that is what matters the most, right?

Dice Wars: Heroes of Polyhedra is a tactical battle game that its selling points being the big custom dice and its replay value. For starters, the game map is made of 9 double-sided tiles making it modular, letting you create many unique maps to try out. Then you have the 26 unique units that come in the game in the form of dice, instead of having miniatures or standees. The face you roll represents the type of warrior that you deployed and you start the game with seven dice that you randomly roll to create your army. That means a unique combination of units every time and one that you will always have to adapt as you don`t choose them. There are also basic, advanced and Hero units in the game represented by a different type of cool dice!
So, how do you win the game? Simple as destroying your opponents and protecting your allies. The game can be played in different modes, like 2vs2 or free-for-all but the basic concept is destroying your enemies. There are three possible ways to achieve victory:

By Regicide: Kill an enemy Hero unit.
By Domination: Kill the last non-Hero unit of an opponent.
By Diplomacy: Hold three captured cities through three of your Command Phases.

You will have to adapt and have a flexible strategy and be ready to achieve victory through any of these ways.
On your turn, you will resolve a Command Phase where you will activate two of your units by performing a Movement and an Action for each. A unit’s action can be to attack, use a skill or capture a city if possible. There are physical and magical attacks in the game, each resolved differently and also some skill checks that determine certain outcomes.
There are six cities available in the base game, each with a different feel and ability than the others.
Apart from all these, there are some additional components-modules that you can add to the game for extra flavor and choices but also complexity. The first one is the Ancient Relics which you can acquire by fulfilling certain conditions and they will grand you a special effect through their magic power. The second is the Faction Bonuses which will grant you a bonus according to the faction you chose to play with at the start of the game. The third major one is the Veteran Units, think them as upgrades or lvl ups for your advanced units when they kill an enemy, gaining experience. The others are a mix of modes like playing with alliances, with more difficult terrains, team Vs team and more.

I`m not sure if this game brings something new to the table but this has not to be the case for a game to be a fun and interesting experience. Chucking a bunch of dice, having tactical battles and all these wrapped with randomly generated elements sounds like fun to me. I like the fact that you just roll your army and you are ready to play! If the flow and mechanics support what the game seems to offer, it will be a winner for me.
If you are interested in learning more about Dice Wars visit its campaign here! 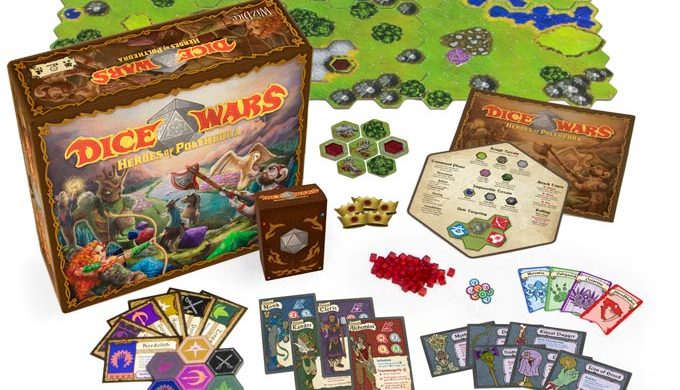 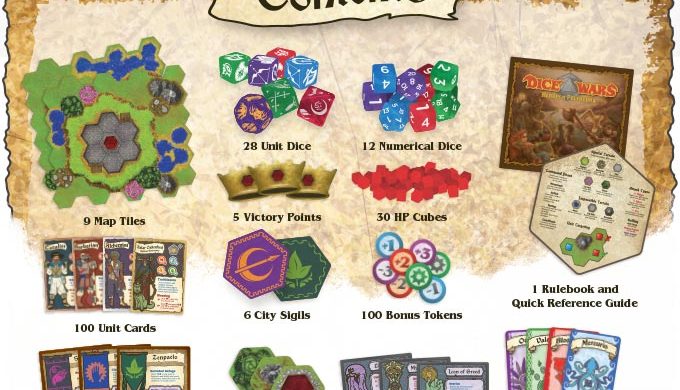