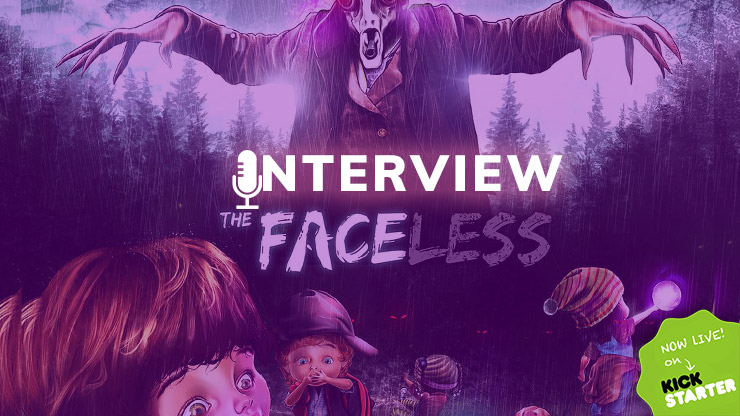 The Facelless is up on Kickstarter and its doing great! A really interesting game with innovative mechanisms! We had the chance to interview Marta Lead Developer / Editor of the game.

1. Let’s start with an introduction. We want to know about Alter Ego Games, as this is your debut. Which is your philosophy and mission as a publisher?
We strive to make original games with innovative concepts and game mechanisms! Our main objective is to see people get engaged around the table, being an active part of the game and having fun together. We know we are doing well when we see people having fun!
2. The Faceless has a quite interesting story behind it, where does this theme comes from?
From the pirates! 😀 We have wrote two designers diaries (First Part  & Second Part) over bgg you can check out for a complete overview! The theme was carefully thought by the guys at the art direction, they were inspired by the creepy and mysterious stories of the early 90s and cult movies and books such as S. King’s IT and Spielberg classics.
3. The magnetic field mechanic is a brilliant idea that blends perfectly with the game’s immersive theme. How did you come up with that?
Guido and Martino, the two designers behind The Faceless, told me they were looking to make a game that worked with a compass. The next logical step was to influence that with the use of magnets. From there it was just a matter of time finding the right spot and wrapping around a cool game! A cooperative experience was the right call, as people got involved together in the tense decisions you have to make to influence the magnetic field!
4. What was the greatest challenge you faced during the designing and development of the game?
I guess it was finding the right size for the board, the compass size and quality and the magnets power. Getting the right spot with these 3 variables was really hard and required a lot of different test to find the perfect balance. There are many subtle things to consider, you see them only by testing!
5. Which is your favourite element of the game?
Probably the fact that after so many playtests, I still happen to be surprised by some situations on the gameboard. This is a game that still keeps me really engaged every time I put it on the table! Magnetism is really fascinating.
6. For what type of gamers is this game suitable for?
This game is geared towards gamers that want to share their hobby with friends and families . The simplicity of game mechanics combined with the gameplay depth given by the dynamics makes it a real competitor to classics of the cooperative genre, in my opinion! We have also seen more omogeneous groups enjoy the game, such as only gamers aswell families new to the hobby!
7. As this is your first Kickstarter campaign, what step or aspect makes you nervous the most?
Although it is the first under the Alter Ego Games flag, we have gathered a lot of experience in ks. We were all part of a bigger team that made some really successful kickstarter in the past years and I still work on other projects as a designer! The biggest challenge we thought (and as the campaign is in progress I can confirm!) was keeping up with the huge amount of things and communication during the campaign! We are a really small team and many times our tasks overlap, so we end up doing many things at once and try to stay cool about it, it’s kinda hard sometimes, but having a direct connection with the people is a such rewarding experience that we end up being happy of doing that!
8. What else can we expect from Alter Ego Games in the future?
It still a bit early to talk about the next projects, but we really want to surprise you with the best we can make! We will always stay true to our vision, so having a close relationship with our backers is mandatory for us and we want to have campaigns that feels vivid and active , beyond the game itself .

The Faceless is on Kickstarter! Check out the campaign!

Read Also the Overview of the Game!

and watch the video of Rahdo’s Runthrough!