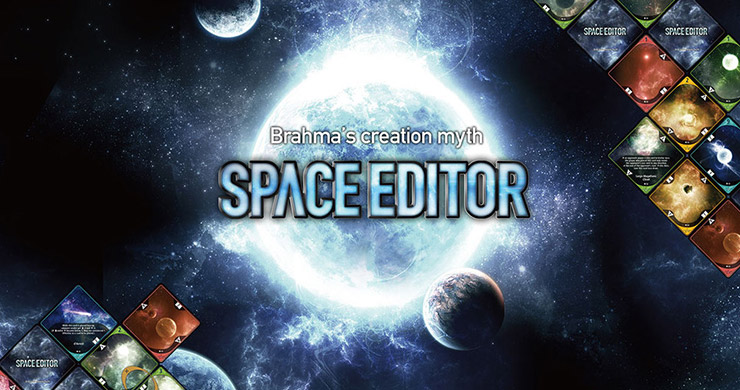 In Space Editor each player becomes an incarnation of a God that governs upon one of the 4 elements: Fire, Water, Earth and Wind. The player who governs the strongest element wins this godly battle.

Space Editor is the first game of “Tactical Games”. It is a card placement game but has the same philosophy as Othello. There are 4 element decks: fire, water, earth and wind. Each one has a unique deck of 24 cards. There are 3 types of cards: Star, Ability and Planet cards.
Planet cards are the main force which you use to attack your opponents, ability cards have various abilities that you can utilize to change the tide of the game and Star cards are the only source of victory points.

The game can be played 1vs1 or free for all with 3 or 4 players. In a two-player game you draw 4 cards as a starting hand and on your turn, you draw a card and then place one on the play area. If playing with more players, each turn you draw 2 cards, play one of the two and discard the other. The end of the game is triggered when no one has cards to draw. The player with the most victory points wins the game.

The main mechanism of the game is to place a card according to its symbols on each side, trying to match any adjacent cards when placed. You can find one of the following symbols on a card’s side:

Lastly, a side may have no symbol and can be matched with another empty side, an orthogonal symbol and with a facedown card. Triangle and Orthogonal symbols also have a value, ranged from 1 to 9. These values are used to defend and/or attack your opponents’ cards.

As you try to gain victory points, you must protect your Star cards as they are your only source of points and attack your opponents with your Planet cards in order to reduce theirs. But how do you attack your opponent’s cards?  If any card has at least two of its sides surrounded by enemy cards with higher values, the card is flipped facedown. A facedown card has its values and abilities ignored. You will mainly want to nullify enemy Star cards by flipping them face down but you can also follow that tactic for strong Planet cards that get in your way. Another way to turn a card facedown is by using the flip symbol, following its placement rules. In addition, a Flip symbol can be played along a facedown card to turn it face up again, thus saving one of your cards that gives you point. But beware! You must remember where is your card or else you may help your opponents. When a card is turned face up it is placed however you want, ignoring the placement rules of matching symbols.

The game doesn`t has a board and its abstract shape is different every time as you place your tiles, making different shapes and paths. This element adds to the tactics of the game and if you get to know how your opponents’ decks works you can adjust properly. I personally prefer the multiplayer of the game as you can only draw two cards and play one, giving you a straightforward choice that makes it feel tight.

Another aspect of the game is it’s deckbuilding. Coming with extra cards for each element deck, you can change your deck and add whichever cards seem fit for your play style.
The game flow is quick and you have to adapt and make choices on the fly, focusing on tactics, as the state of the game changes with each play. It also features beautiful art, creating a galaxy map to your table.

A space tile placement game with a puzzle factor. If it seems interesting you can check it out on Kickstarter to know more and consider backing it! 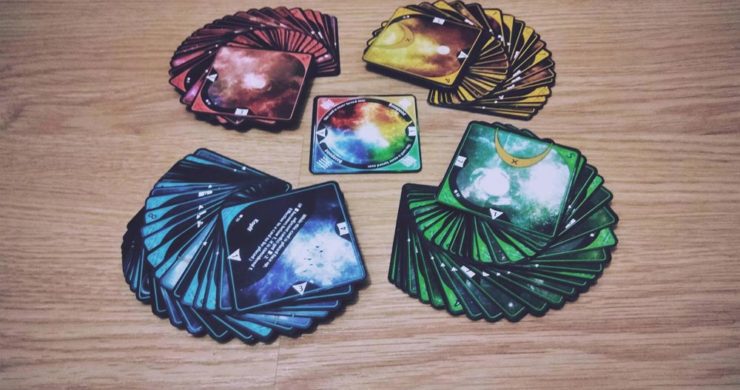 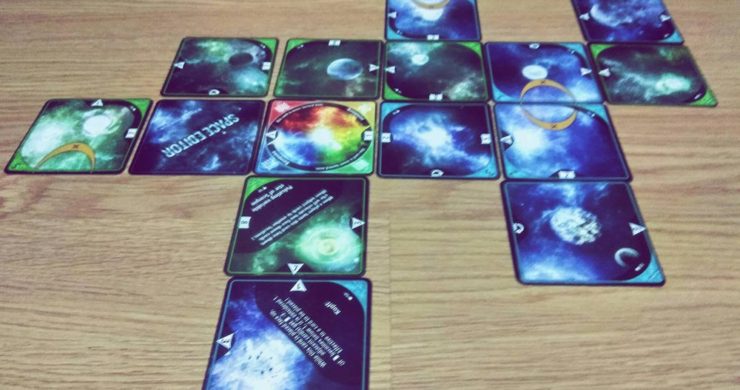 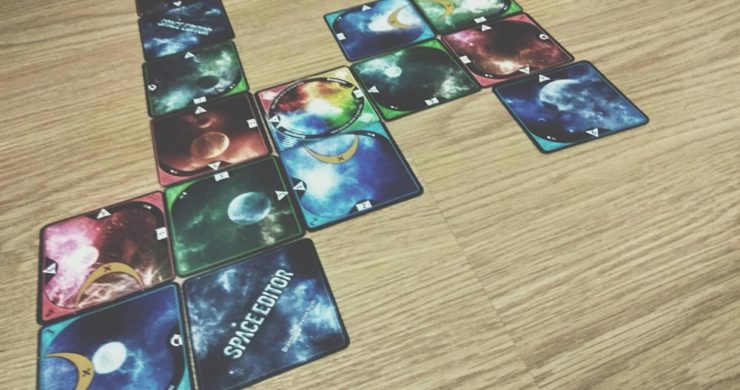