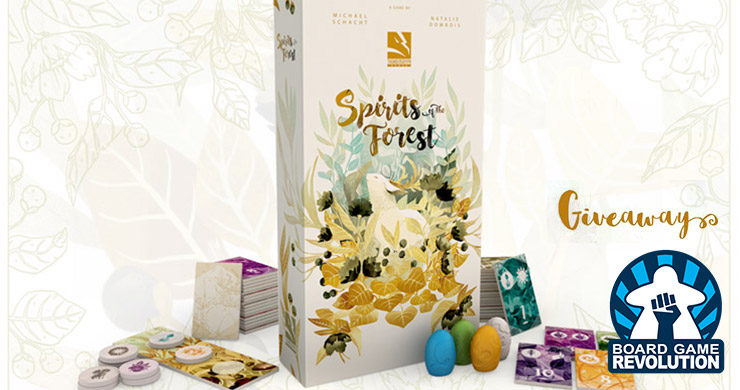 Spirits of The Forest Overview and Giveaway by Board Game Revolution!

Spirits of the Forest is the 4th Kickstarter campaign launch by “ThunderGryph Games”, a quite new publishing company that you should definitely keep an eye on. That is because they are highly professional and always deliver top-notch quality games, at least component wise for sure. You can see that within a couple of minutes by just checking how the game looks and the structure of their campaign. So, let’s take a brief look at the game.

Theme
In this game, you take the role of a celestial being in a contest to collect the life of the forest, animals, and plants. The theme comes from the aesthetics as gameplay wise it’s an abstract game. So, without focusing more on that I would like to mention that the artwork is breathtaking and the whole package gives you a calm feel.

Goal
The game revolves around a set collection mechanic, fighting for majorities and scoring points, negative or positive. The player with the highest sum will be the winner! It can be played up to 4 players, meaning there is a solo variant included. I had the chance to try it both solo and competitive as it is available to play on Tabletopia and will let you know my thoughts after I explain how the basic game plays.

The main component of the game is the Spirit Tiles, which depict one or two icons out of the 9 available spirits and some may also depict a Power source icon. There is three type of power source icons and they work the same way as Spirit icons, meaning that you will score them through majority.

Gameplay
To set up the game you lay out the cards in a 4×12 table which represents the forest. Each player will gain some Gemstones, which are used throughout the game to try and reserve a tile that you may want a lot. Lastly, some Favor tokens are placed on top of some tiles, face down, which have some extra benefits if you acquire them, like additional icons. All tiles are face up so you have perfect information apart from the hidden tokens, to create a strategy.
On your turn, you can only acquire tiles that are on either end of any row, either one tile with two spirit icons or two tiles of the same color with one spirit icon each. Power source icons are depicted only in cards with a single spirit icon so even taking one card (because there is no other available with the same color and only one spirit icon) may be a valid choice, instead of going for the double ones. You can use a gemstone after that, placing on top of any tile of your choice, depicting that only you can acquire this tile or another player if the discard one of their gemstones out of the game. So, use them wisely!

End Game
The game ends after all tiles have been collected. Then, each spirit and power source icons are scored one by one. First of all, any player that hasn`t at least one tile of the icon that is scored loses 3 points. Then, only the player with a total majority scores one point for each such icon at their disposal. Favor tokens can add icons to your total but don`t count on their own for not losing points, so be careful!

Solo Variant
I am not a huge fan of solo variants but in this case, it’s a good one to have. It’s an enjoyable puzzle that you can also alter in difficulty after you beat the basic one. In that variant you play Vs the game, having all the forest tiles facedown except the first and last tiles of each row. On your turn, you take a single tile and then give the one at the opposite end of the row to the “NPC”. Only the spirits are scored in that variant and there are some extra rules but it is extremely quick to play and offers a nice experience. The random layout has a lot to do with the result but it doesn`t matter that much for what it is.

Campaign & Thoughts
The game is a very straightforward abstract game that will draw anyone’s attention when layed out on a table. It’s ease of play and quick flow makes it a very solid choice for casual and seasoned gamers. Set-collection is one of the most commonly used and favorite mechanics of all time, making it a safe choice overall. You won`t see a new groundbreaking mechanic or element but a solid and elegant game.
The campaign is already funded, hitting many stretch goals and more will keep coming. There are also three versions of the game – Retail, Deluxe and Collector’s Editions for you to choose from, each with ascending quality in components. Make sure to check out the campaign here if it seems like an interesting game to you! 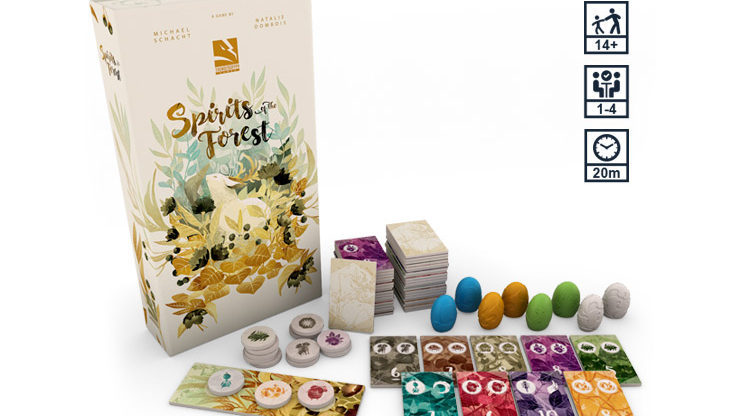 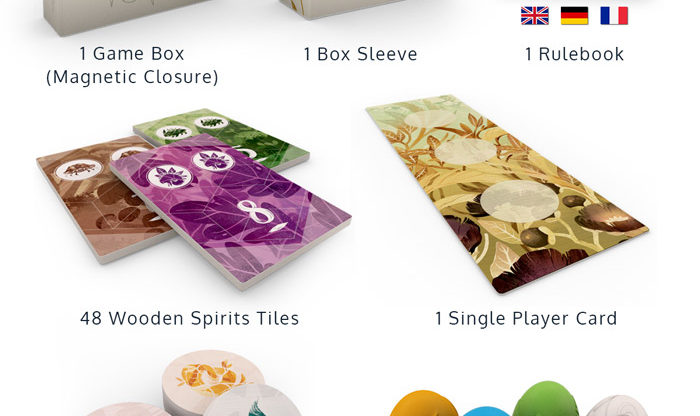 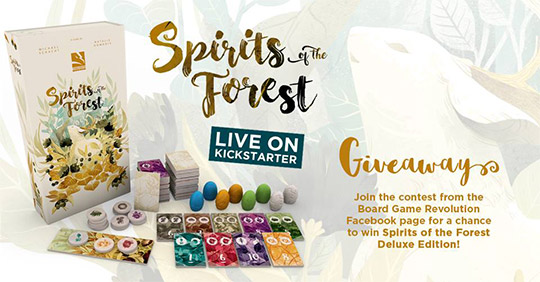 Enter the Spirits of the Forest Giveaway
by “Board Game Revolution”
for a chance to win 1  Copy of the Game!

Spirits of the Forest Worldwide Giveaway