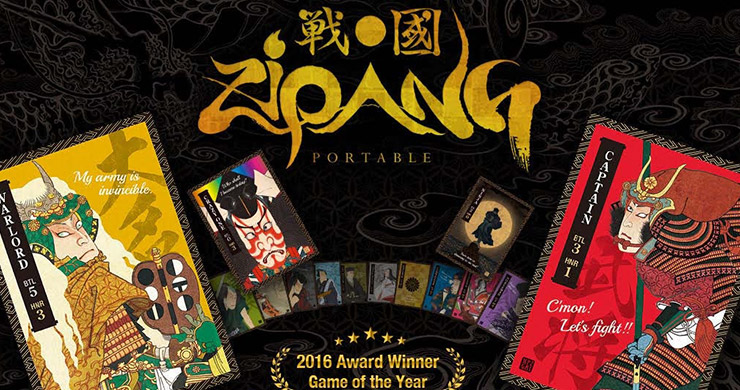 During the 17th century there was the Sengoku period in Japan. In Zipang you are a rising samurai trying to become the all-powerful shogun by gathering resources, honor or by eliminating your opponents.

Zipang is a filler game that resembles a bit Seiji Kanai’s Love letter. There are 30-character cards in the game and 14 different characters in total. Each one has unique abilities and deferent values of Honor and Battle power.  Each player takes 5 coins and 2 cards, then 1 coin from each player is put to the center of the table and finally 1 coin from the center  pile is discarded.  The remaining cards form the deck and the top card of the deck is discarded face down to form the discard pile. The game is played over several rounds until a player has no coins in front of him/her which triggers the end of the game. Winner is the one with the most coins.

Let us see how a game of Zipang goes. On their turn players draw a card from the top of the deck and then choose one of the 3 cards in their hand to play and perform its ability, by discarding it face up to the discard pile. Cards have various abilities including attacking other players. In order to defend, the defending player must show a card of equal or greater battle value than the attackers value.  At the end of the round, if a player remains alone he/she takes all the coins from the center of the table. If multiple players remain the one with the most honor wins the round.

Zipang is now on kickstarter with various stretch goals to be unlocked, a very reasonable price and low shipping costs. The cards have beautiful old style Japanese art, so if you like fast games, samurai and a game that is portable to play anywhere check Zipang here. 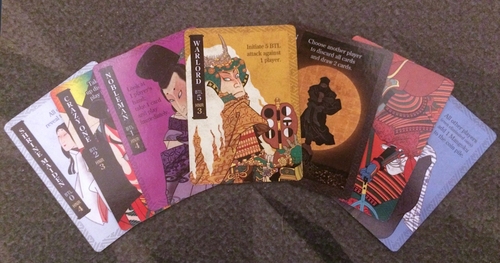 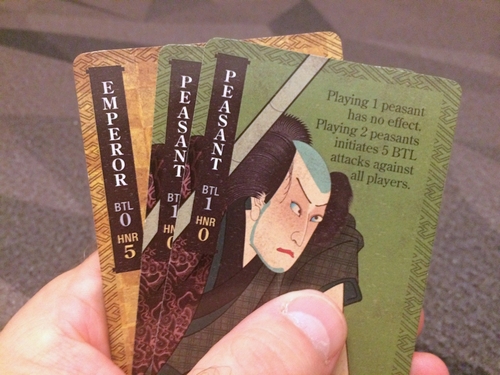