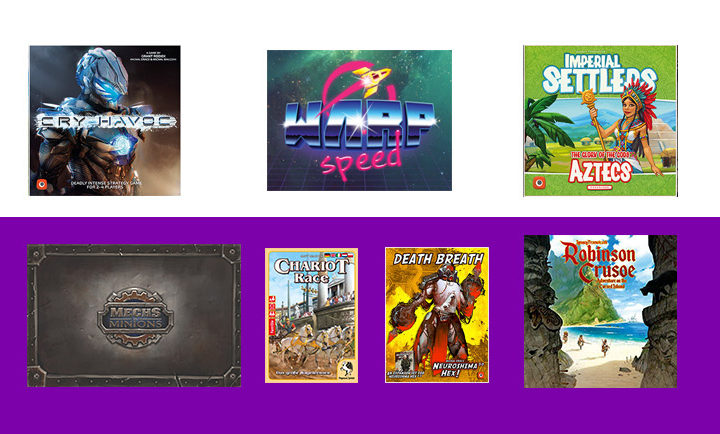 Game designer Michael Andresakis has emerged from the ashes of his departure from MAGE Company to start up a new company called Jam Games. And their first project? Warp Speed, a space exploration game inspired by classic anime and VHS b-movies. You can see an preview of the game on their Facebook page. The game is expected to kickstart in early 2017.

Portal Games is adding another expansion to their Imperial Settlers line; Aztecs will be released in December and will not only introduce a new Aztec tribe to the base game, it will also introduce a religious angle where you can perform ceremonies and sacrifices to appease the gods. Portal will preview the game at Spiel 2016.

Another game previewing at Spiel in Essen this year is Chariot Race, a rapid dice game published by Pegasus Spiele and designed by Matt Leacock (Pandemic, Roll Through the Ages: The Bronze Age). Imagine the chariot race from Ben-Hur (the classic 1959 version, not the garbage 2016 release) in board game form, and you can expect a wild ride! Read more…

And if you’ve been living under a rock, then you’ve been missing the buzz around Mech vs. Minions, a cooperative battle miniatures game from the world of the popular online multiplayer game League of Legends. It’s sure to be a hot commodity when Riot Games begins to sell it exclusively on their website starting Oct 13. Learn more about the game at our article!

And check out some of the previews offered by Board Game Stories. Ireth did a piece on a fun farming game called Cottage Garden, Grantelith has a preview of a new edition of Robinson Crusoe, and NinjaBoy has a stunning preview of an upcoming Kickstarter game called Land of  Zion.

Enjoy the rest of your day, and we’ll see you back here tomorrow for another morning roll!