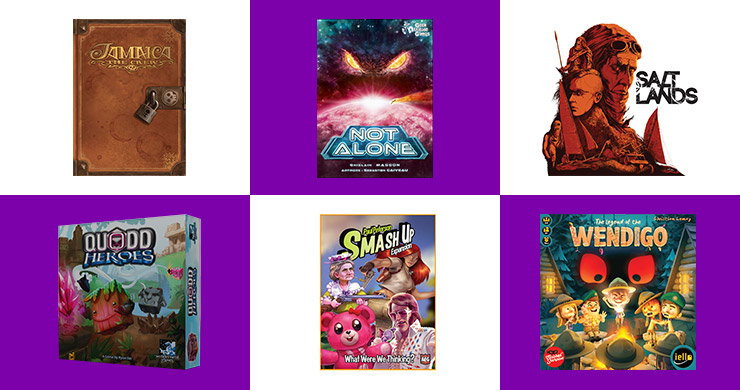 Jamaica is a tactical race game released ten years ago, where you play as pirates racing their ships and pillaging for treasure. A nominee for many gaming awards that year, there hasn’t been any updates for Jamaica since. Until now! In the new year, for the game’s 10th anniversary, we’ll get to see its first expansion. Jamaica: The Crew will add characters to the game that you can hire for your boat, and each character comes with a special power. This expansion comes from the same team that created the original Jamaica.

Antler Games previewed Saltlands at this year’s Essen and was a huge hit. And now, the Mad Max/Tank Girl inspired survival game will be in stores in January 2017. In addition, an expansion called Lost in the Desert will also be in stores. Find out more and pre-order here.

AEG will be releasing another expansion to their popular game Smash Up next year, which will then introduce the game’s 50th faction. So, to celebrate, they went weird; What Were We Thinking? is the newest expansion, introducing grannies, rock stars, explorers and teddy bears, because why not? Find the expansion in stores in March 2017.

And congratulations to CMON Ltd. for becoming a publicly traded company on the Hong Kong Stock Exchange last week. This move should help the company grow even faster.

Here’s what you missed from Board Game Stories:

QuiverQuinn take a look at two new releases from Iello Games – The Legend of the Wendigo and Pyramids.

NinjaBoy again with a closer look at the surprise Essent hit Not Alone.

And make sure to check out our interview with the creator of Quodd Heroes, now on Kickstarter.

Thanks for stopping by, we’ll see you next time!