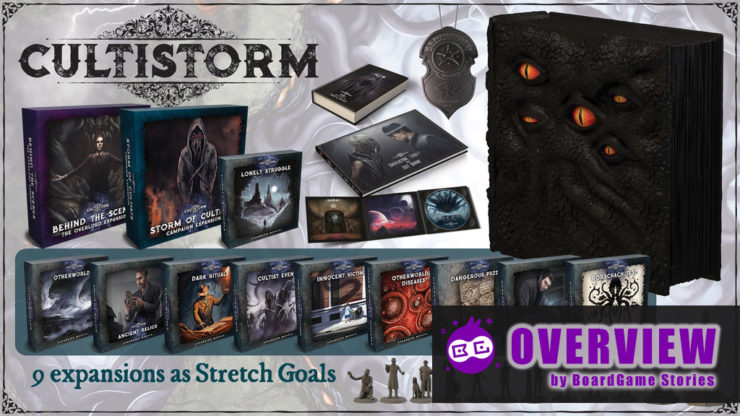 Cultistorm on Kickstarter | In Depth Overview!

Purple Meeple Games, a new creative studio founded by Sandor Szucs, just launched their first game, Cultistorm, on Kickstarter. The company’s main focus is the international publication and representation the card and board games of Hungarian designers. They didn`t hold back at all with their first project, launching a full gaming experience. Apart from the miniatures, unique art, and custom 3D box, there is an illustrated script book, short stories, and even a soundtrack! I know I ask for too much but I wish each thematic game could come with that kind of support.

Cultistorm is a cooperative experience where you get on the role of investigators located in the United States of the early 20th century.
You are from a special department of the Massachusetts State Investigation Bureau and the Miskatonic University, making you the perfect fit for the task. Fanatic cultists appearing around Arkham, ready to summon the Great Old Ones through their dark ceremonies. Work together and seal all the locations before its too late, our lives are counting on your teamwork!

You win the game as a team if you manage to seal all 5 while there is no Great Old One in play. Losing the game might be easier though. By going mad and dying, by letting an Old One reach a location undefeated and having more cultists in-game than the predefined limit. Lastly, the game comes with two special end trigger conditions, specified on two Endgame cards.

Your investigator comes with a unique set of attributes. Having special unique abilities, a type, and being ranged or melee. All investigators can have up to 4 insanity tokens, on a 5th you go insane and lose the game! There are ways to heal them but beware of the special dark insanity token which is almost untreatable.

Each investigator comes with a unique set of action cards. Using them lets you to either take advantage of its symbol to go against that type of cultist or activate its special effect on a teammate. The latter will most likely grand you an insanity token but this very mechanic is the core of the game’s cooperation nature. Quite intriguing if you ask me, as I do love cooperative games and many suffer from the “Alpha Gamer” issue. 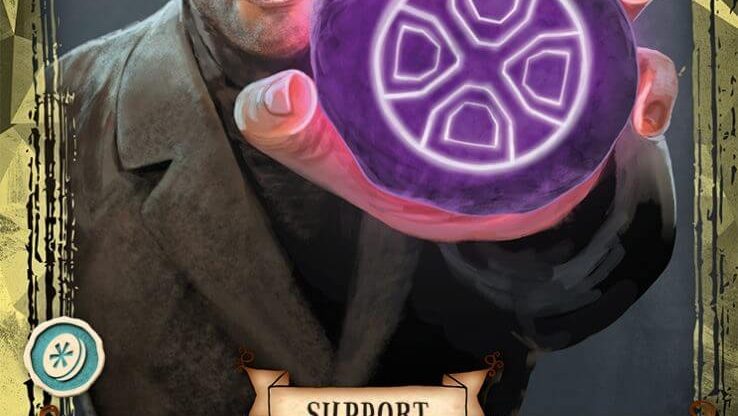 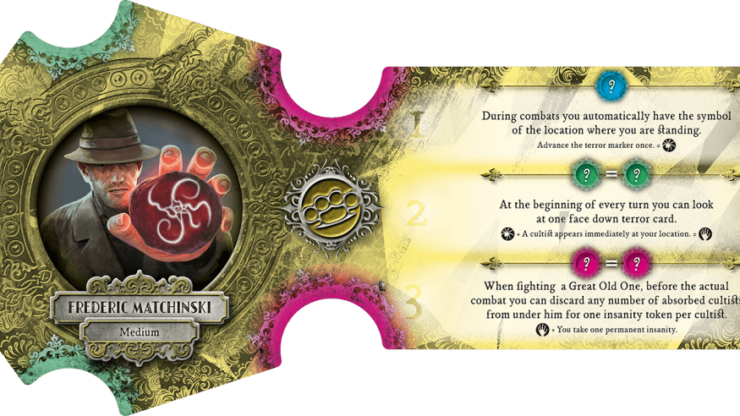 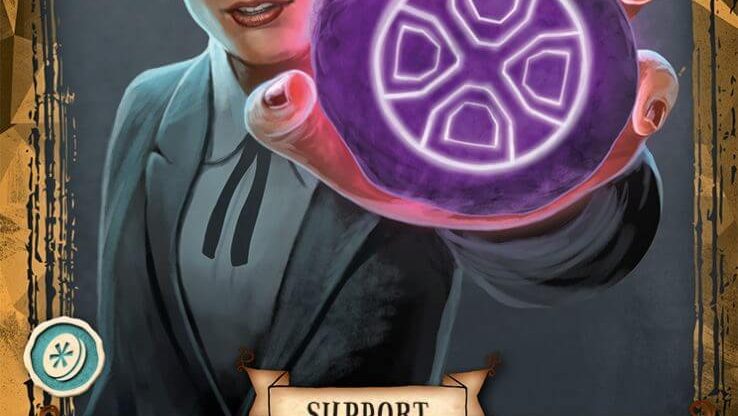 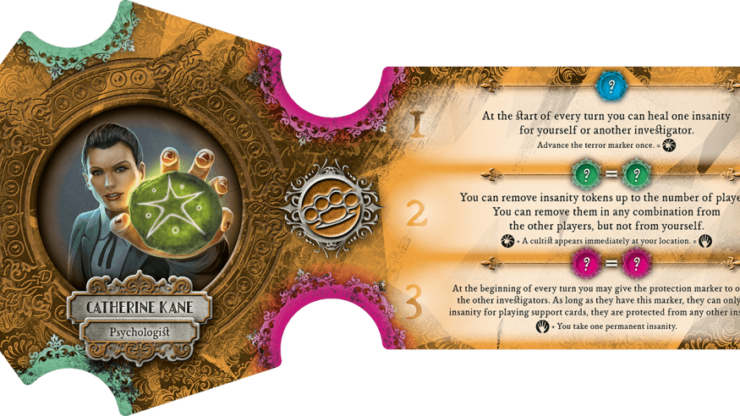 The game uses a beautiful game board that holds the locations and other vital game elements. You only play with 5 random locations, so each game starts differently. 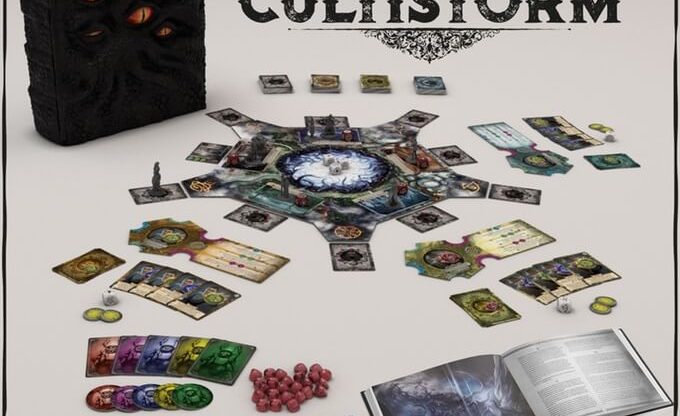 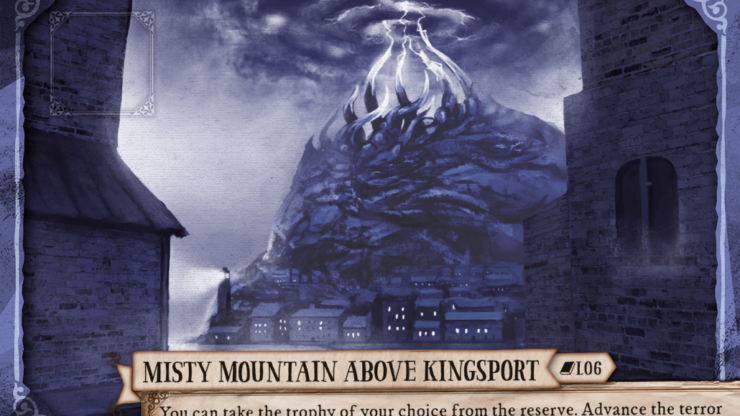 The game plays in rounds until one of the end game conditions is met, as mentioned before.

A round consists of six phases:

I now need your attention here. This is how the base game plays but you can also try the narrative mode, for a more thematic and unique experience. Use the Script Book to play this way and when you are about to fight with a cultist draw a narrative card, reading the depicting section in the book. Adding the storytelling aspect in your game will offer thematic depth but will make it last longer.

Regardless of playing with or without the narrative option, keep going through these phases until the game ends!

It’s needless to say that the creators of the game are in love with the work of H.P. Lovecraft. That’s the reason behind the creation of this game of epic proportions. Thus, this is for all of Lovecraft’s fans.
As you can probably already tell, if you like thematic games this is definitely for you. The whole package works towards that, making a highly thematic atmospheric experience. Apart from that, even if the game is mid-weight, it doesn’t have that complicated set of rules. I think that if you mostly like family games and fillers this might not be the option for you.
Lastly, this game is for team players. It seems to be quite difficult to defeat and it relies as much on teamwork as any cooperative game should. Additionally, there is enough content to give high replay value for the game which is always an appealing game element.

There are three major expansions and each changes the way you play the game significantly:

There are also 9 minor expansions available for the game, adding new elements and mechanics to the game. Other than that you will find a big variety of locations, cultists and Old Ones. Find more details for each Cultistorm expansion!

Their campaign is straightforward, having all the details for all the elements of the game. You can have a taste of the soundtrack, read the rulebook, take a look at the art, graphic design and more. It already has more than 1,600 backers and it’s almost funded, with more than $200,000 raised. There is one pledge for the game, having the base game along with the three expansions for free. Stretch goals are included of course and there are no paid add-ons!
Overall I find their campaign very professional and I love that I can feel their passion for this project. Make sure to check it out if you find this interesting! 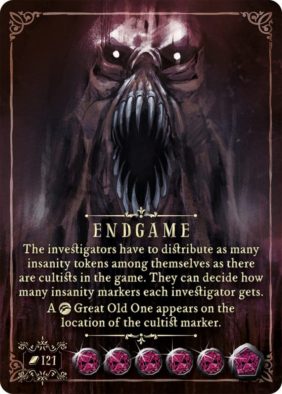