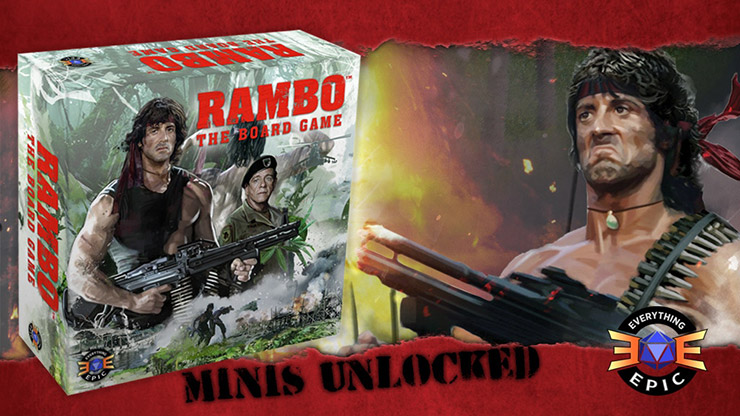 Rambo: The Board Game

A game setting that needs no introduction is coming by “Everything Epic Games”. “Rambo: The Board Game” is a new tactical miniatures game that will let you relive Rambo’s epic missions or experience them for the first time, along with new, never seen before ones!
The films had such an impact that we tend to call someone Rambo if they are very agile, cool and indestructible in our daily lives (at least we do here!). So, let’s take a look at the campaign and game itself.

Campaign & Game Overview
As Rambo and his team will take only on extraordinary missions of difficulty: hell, this will be a cooperative operation for you taking on the role of one of the four iconic character from the movies. This will surely add pressure to your team but they wouldn`t choose you if you weren’t at least the best!
The game comes with missions, following a campaign system that unravels the story as you complete missions and have successful operations. It comes with a ton of components and 5 Operation packs in the base game but there will be more added for sure as the stretch goals and KS Exclusives are unlocked.

Each operation is consisted by a number of missions which include different objectives and are essentially like a puzzle you will have to solve in order to succeed. Your methods may vary by utilizing stealthy techniques up to brute force and firearms! Each character comes with a unique set of stances and three personal abilities. The first one is a permanent ability which comes by your “class” and the other too are cool abilities you can activate by using the momentum of battle, a resource that represents the flow of battle. Stances represent the way you approach combat each turn and can have up to four handy effects each.
The game board uses squares for spaces and is divided in 16×16 areas with different elements according to the scenario. The most commons component on them would be the fog of war cards which are revealed as you get access to these areas, revealing the enemies Etc. This aspect of the game adds the unexpected element to the game and will test your adaptation skills.
The last thing I would like to note is the battle of the game which has no luck involved – sorry, no dice. You are veterans and your enemies are no weaklings, so every attack it’s a hit. That makes it very tactical and even lets you bet on different strategies on how to approach a mission with the given resources (cards Etc.).

Being a Rambo fan or not this game seems like a blend of pure fun and high strategy, blowing up people and overcoming challenges. A highly thematic game with good and enjoyable mechanics makes a winner for me as it will deliver a great experience.
The campaign is well made and the video will give you a good taste of what to expect. Make sure to check out the Rambo campaign if you want to know more and stay updated about its progress!