Clash of the Ardennes is a two player strategy game from Elwin Klappe. Inspired by a front of historic Battle of the Bulge, players must use their units to conquer a combination of streets in relation to their personal objective.

Note: At the time of this article, Clash of the Ardennes is crowdfunding through Kickstarter, and is successfully funded. This means that copy of the game provided for this review may not fully match the final edition 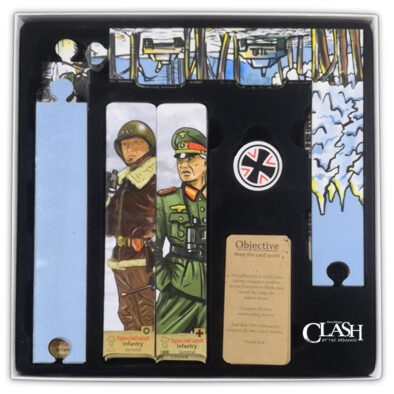 Included in the game box you can find the following, for each of two sides (Axis and Allies)

The pieces themselves do not lend very well to being used in other games, most notably because they are different sizes as part of the main mechanic. Very little from this game is reusable in other circumstances beyond the art.

To begin with, the game board is set up and each player selects an Objective Card at random. This determines what the victory (and by proxy, loss) conditions are for that player. The rules for playing the game may seem complex at first, but much like chess the ways to use the pieces are simple, but countless ways to use them. Within the battlefield are seven tabs to mark the streets. 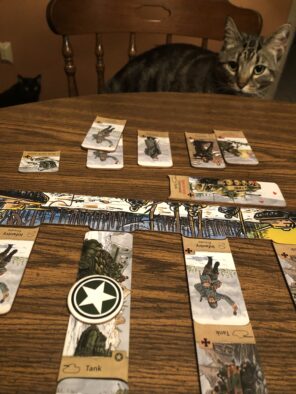 Each player’s turn includes four action points, which allows them to place or move their units.

With these factors in mind, each player spends their points to advance down the seven streets and either conquer the ones they need to win, or conquer the ones they predict their opponent will need. If at any time a player conquers a street the wrong way (such as an objective requiring no more than five units in any street as you conquer it, or needing to conquer the two streets at the edge and taking one in the middle), or if a player’s opponent conquers a street they require, that results in a loss for the player who has failed their objective. That means a strategy must not just include winning, but not losing.

The “Clash” action is where the battling takes place in this game. When an Axis and an Ally unit are head to head in a street, a player may clash on their turn. To do so, simply compare the unit types. An anti-tank mine beats tanks. Tanks beat infantry. Infantry beats anti-tank mines and infantry of lower ranks. If units are the same, nothing happens. If one unit beats another, remove the beaten unit, and every one behind it that the victor could defeat. For example, a player who has placed three tanks in a row to advance down their street will lose all three if their opponent is able to clash with an anti-tank mine. Players are encouraged to stagger their units while also keeping in mind what their opponent might place after a clash. Even at an advantage, a player may choose not to Clash. By waiting on what is a free action, the opponent cannot clash and must spend three of their four points for a turn to retreat the threatened unit to make any progress in the same street before the advantaged player seizes the moment. Any units that retreat or are defeated in a clash go back to the player that owns them, and may be put into play again normally. All units in a conquered street may no long be targeted by actions from either player, effectively locking them into place for the rest of the game. Finally, when a street is conquered in a valid way, that player draws and immediately plays a Victory Card. Victory Cards allow for a variety of bonuses from allowing reclamation of units in a conquered street, to revealing your opponent’s objective. 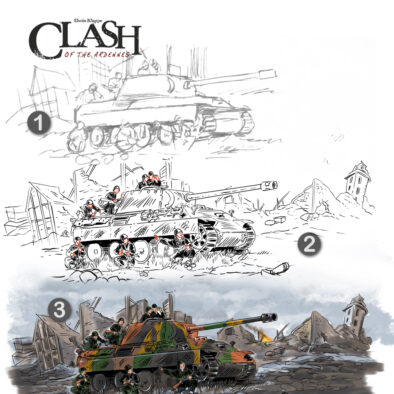 Clash of the Ardennes is almost entirely skill based. The Objective and Victory Cards are the only luck-based factors to the game. For players who enjoy games like chess, this game will have a comfortable feel. Many players prefer games where their decisions matter the most when determining if they win or lose and this game offers that. No dice that can be lost on a bad roll, no algebra to determine bonuses and penalties, and no constant blind card draws that can derail a strategy. With the consideration that units will be “locked” after conquering a street, and limited unit numbers in general, the further along a game gets, the more careful a player needs to be not to over commit or overextend their forces. The action point system is broad enough to offer a wide selection of choices without making turns overly complex. Players do not need to worry about unlocking tech trees, abilities, and bonuses – freeing the strategy to placement.

Additionally, the art within Clash of the Ardennes is well done, and based on historical imagery. There is also no concern for colorblindness because the pieces are only facing one direction for each player.

The unit pieces are designed with thickness, which allows them to be picked up easily for being two dimensional.  Also in this particular case, the lack of minis for how many pieces there are helps keep the box compact. Finally, the box is engineered to fit everything exactly. When done right, nothing shuffles about and risks damage in transit and shelving.

Due to their being no guidance for the lanes, it was frequent that what was otherwise a carefully measured game wouldn’t line up right due to imperfections/curves in the placement of units. Also, the battlefield is created by assembling puzzle pieces, which if not perfectly flat will not line up properly. With the large number of pieces that need to move precisely, this game can quite susceptible to cat hazards, as well. There is also no way to dynamically count which actions have been taken, so that a turn that takes particularly long may stumble as the players recall what’s been done. 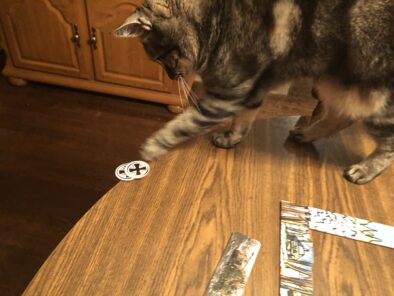 Only with hesitation is the theme of the game included here. Not because World War II isn’t a great hook, but because other than the name and art, there is nothing about the game that could not be simply reskinned as anything else. Once past the art and looking solely at moves, the feel of the theme disappears.

As the final negative, a contrast to one of the positives. The box is perfectly designed to hold all included pieces, but that also makes putting the forty-eight units of varying lengths back into the box a puzzle of its own.

Clash of the Ardennes offers a game of varying paces and strategies through fairly simple rules. Players need to deceive and discourage their opponents with limited forces, encouraging a lot of forethought in every decision. History lovers may enjoy the call out to a specific battle of a Great War although the gameplay itself has very little to do with the theme itself. In equal parallel, the art is excellent although the layout itself can be problematic at times.

As always, the litmus test for every game: Is it fun?

Yes! Clash of the Ardennes makes for an enjoyable play experience whether the players take the game at a leisurely, thoughtful pace or set a timer for speed matches. There may be some room for modifications to stabilize the battlefield area a little, but the mechanics themselves have very few critical points as the rules are refined and errata released.

Overall, Clash of Ardennes earns a 9/10. 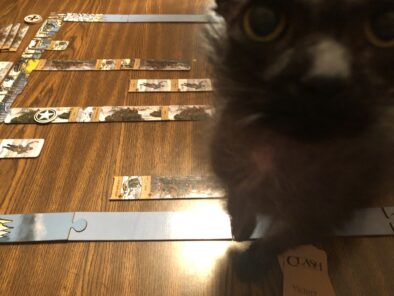