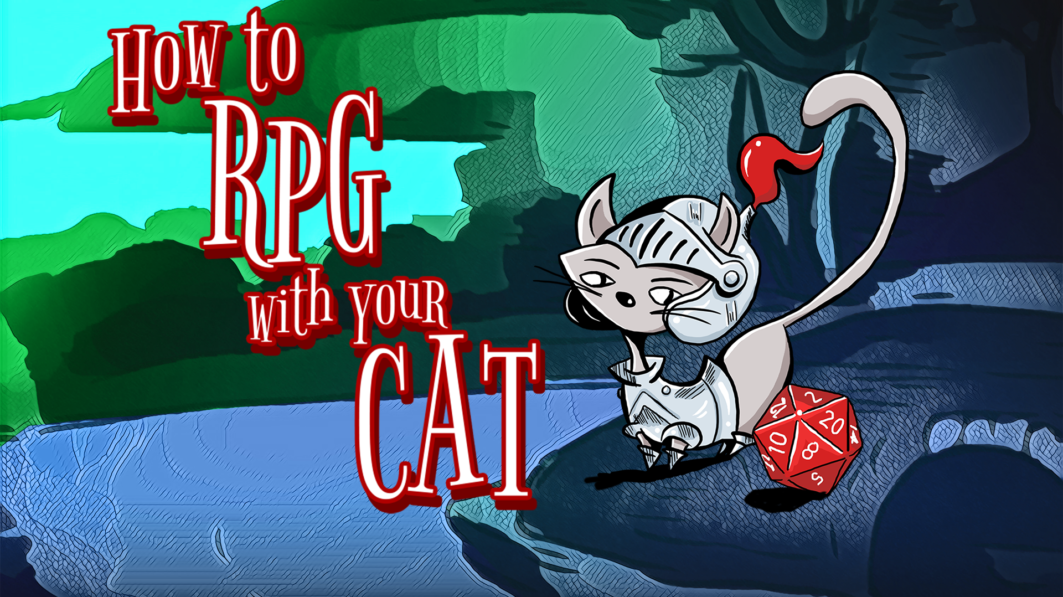 “Our cats have always had a knack for jumping on the game table and causing maximum destruction just when we’ve reached a critical moment in an RPG. It’s understandable – they want to be in on the fun. One day, as we were trying to find all the dice that had been knocked to the floor and batted under furniture, I jokingly said, “We should make an RPG that we can play with our cats.” My husband replied deadpan that it would make a great product for introverts like us who quiver in fear at the thought of inviting a group of actual humans over. So, I started to noodle around with the design and eventually pulled our team into it and I think we came up with something pretty cool. Fortunately, we all seem to be semi-reclusive cat-owning gamers and had no problem with testing. When the quarantine set in, it seemed even more relevant. We ran a test game on zoom, and it was so much fun to watch the cats (and their humans) scamper and frolic as we all tried to survive an attack by space pirates.” – Jen Howlett, Co-Creator

How to RPG With Your Cat is a universal tabletop roleplaying game add-on produced by Oddfish Games. The premise is that you can create a character for your cat, and interact with them out of game to determine their in game results. As of this post, the Kickstarter is in progress. There are adventures that can be acquired, but this review will focus on the core system.

The game itself requires you to use objects that you have on hand, and comes with no resources other than the game book itself by default. On the plus side, there are no hard requirements, and may improvise anything as you go.

The primary template for the game’s mechanic, is that if your cat is appreciably close and cooperative, you pick an activity based on the action you are trying to have their character perform. If none of the options feels right (such as not having the right toy on hand, or knowing your cat may have a negative reaction), you can create your own table or simply go with the “Luck” test provided. Items on the table have a range of ten results expecting anything from fleeing, exuberance, or other playful behavior. 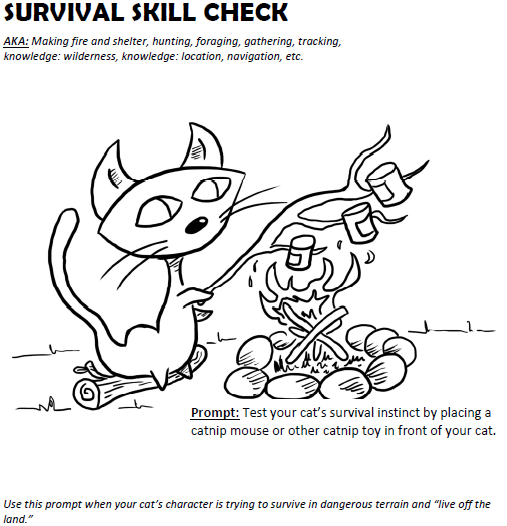 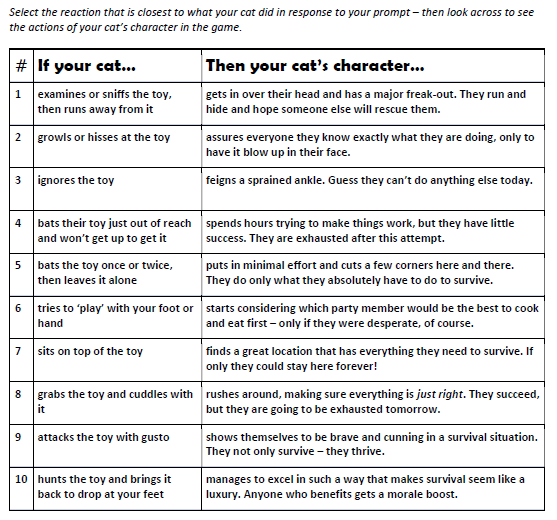 Courtesy of OddFish Games, above is one of the prompts and result tables you can attempt.

The book offers options to build your cat a character, often relying on abstracts. For example, you give your cat a class which allows them instant success on a specific roll type, if you wish to forgo the prompt. They can also get cat-themed advantages, spells, and disadvantages. A disadvantage is selected for every advantage or spell your cat’s character has. These are things like “Lap Cat”, which lets your cat’s character manipulate humans, or the “Underfoot” spell which allows you opportunities to trip those around you, and offset by things like “Hairballs”, which can make others repulsed by the character. Any class or special trait is completely optional.

First and foremost, in the review copy of the core book PDF, there are at least three locations where it is declared to not force you cat into anything, to allow them to come and go as they please, and cater the tests to your cat’s interests. The game is about including them and making it fun for them, too. Another huge plus is that they include a list of toxic plants and a link to animal poison control hosted by the ASPCA.

Second, there is a section that outlines suggested conversions for a variety of systems including D&D5e, Fate, and NWoD to show the level of utility.

As a bonus, the game doesn’t necessarily need to be related to any RPG session. It can honestly just be a list of ways to play with your cat(s), and keep you invested in what’s going on.

In relation to the actual mechanics, they are light weight and adaptable. How to RPG With Your Cat thrives on the chaos your pet brings to the game, possibly making you cheer on their normally obnoxious behaviors.

The greatest downfall of this game is also its greatest boon. It requires a cooperative cat. You may set aside game time, or intentionally try to include your cat in an active session and it just simply doesn’t happen – cats will simply act on their own time. This can be a letdown and may limit your game based on the number of cats you are trying to include.

Another aspect of the game that offers the most forgiveness to the Golden Rule of GMing (the rules are guidelines, GM has final arbitration) also requires a lot of preparation. In essence, your first session of How to RPG With Your Cat is going to start with a scavenger hunt around your house for objects to use in the prompts.

Lastly, the game design seems heavily focused on high fantasy settings, and does not include conversions for games with open-ended rolls. For example, a damage roll being maxed out in a game like L5R would be astronomical. As long as your GM is good at improvisation this should not be much of a hurdle but it is worth mentioning.

How to RPG With Your Cat brings a fresh take on tabletop RPGs, which can be a welcome way to spice things up. It’s especially useful if you don’t get to play with your usual crew in person much. The mechanic allows for easy conversions to most conventional games and is the most Cat Hazard friendly of anything encountered so far, in that it requests your cat to be hazardous. The shortcomings lie in the erratic behaviors it hopes to elicit. Your cat(s) need to be present and cooperative, which means there either needs to be a main arc they are optional to, or that your schedule is very flexible to advance in the story. Prep time may become an issue as well, since it requires a number of objects to prompt a cat with, but there is also some meta-level versatility. They may not be available when you want to campaign but you can certainly just use these prompts whenever you want to interact with your cat. But obviously, this wouldn’t be a CatLord review without delivering. Some action shots follow the summary.

As always the final litmus test: Is it fun? Absolutely. Play might be hit and miss, but when it’s on, it certainly makes for some good stories and great bonding. 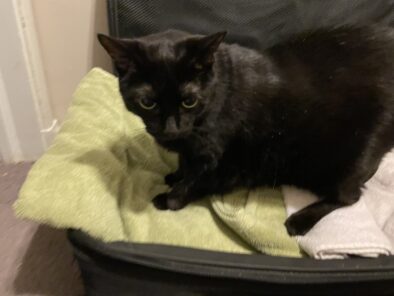 In the book, a Fortitude save requires a litter box. For health reasons I made an alternative – I started packing a carry-on luggage with towels and sure enough, Fifo could not resist. 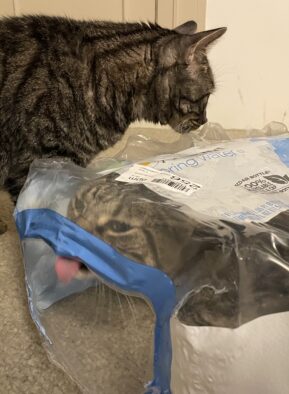 Armor Save suggests you prompt your cat with a foil tent. I happened to have the plastic from a pack of water bottles, which Max happily used to wait out his attacker. 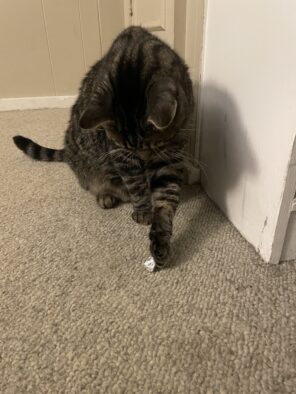 Shark was given an opportunity to make a Luck check. This prompts the cat with a d10 and uses the result of the die (if you can find it afterwards)