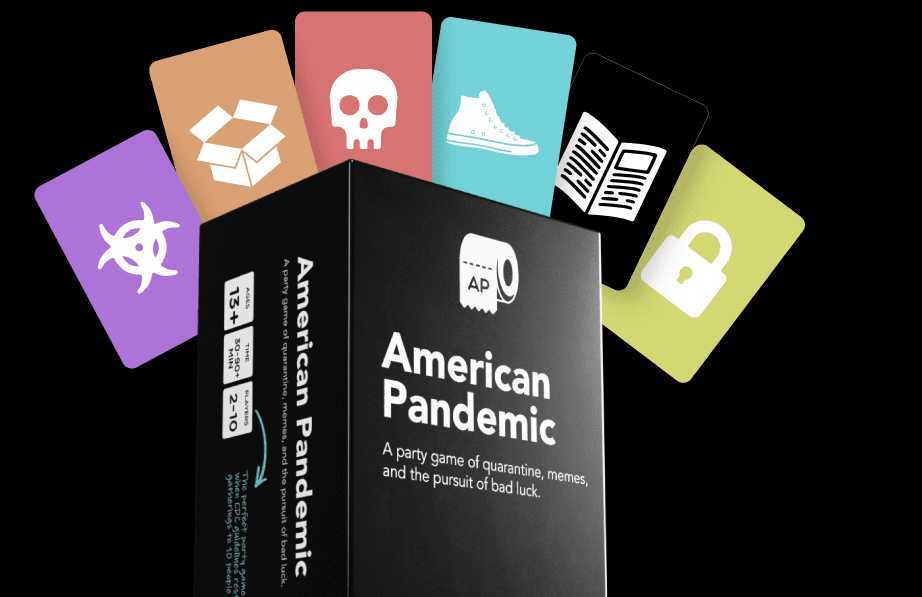 This game is themed around a very serious event. It is intended to be light-hearted, and not centered around actual illness or death. 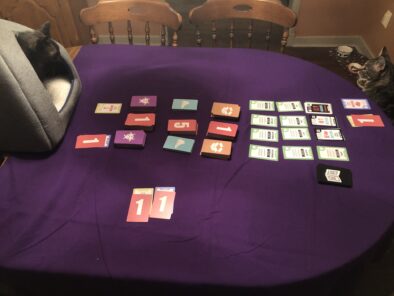 American Pandemic is a cuthroat party game by Joseph Fountain. The game allows anywhere from 2-10 players to set up, and offers three different game durations (4, 6, or 12 rounds).

The game is entirely made of cards, including how the score is tallied and the “cheat sheets” for the game rules. 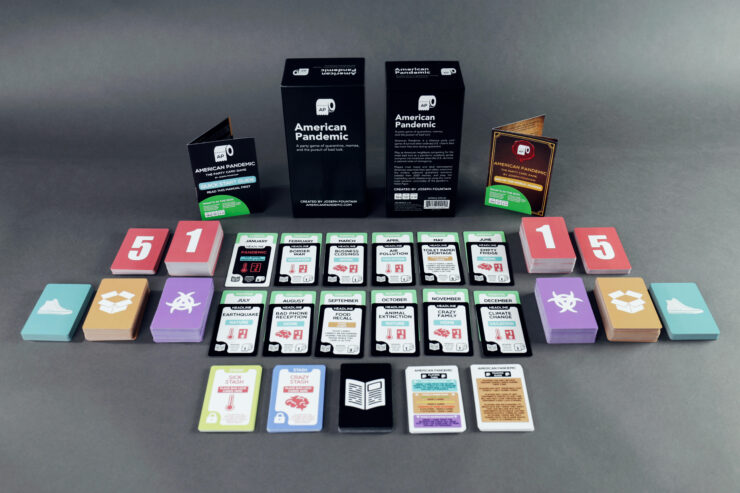 Setting up American Pandemic is a fairly quick process. To begin with, separate all of the cards into their respective decks (Headline, Quarantine, Event, etc.) and give each player a Crazy Stash card and a Sick Stash card, as well as two Bad Luck (1) cards. The Bad Luck cards are distributed as the player wishes between the two stashes. At this point, each player should leave a large empty space to represent their Pantry area to be filled during the game. All remaining stash cards are set aside for the rest of the game, and all decks except for the months can be shuffled then placed somewhere all players can reach them. Set the month cards where everyone can see them, face up, in order. Find the “Pandemic” Headline card, which has inverted colors compared to the rest of the deck, and place it overlapping the “January” month card. A number of months is revealed at the beginning of every round equal to 12 / # Play Rounds. Thus, in a 6 round game, you reveal a headline for two months each round. A headline card is black with a newspaper logo.

A player begins their turn by drawing, then revealing an Escape card, featuring a blue card with a shoe logo. Each Escape card has a key word and an effect, such as “Nature” and “Discard one hoard card from your pantry”. After any effects that are immediate, look for all headlines and collect Bad Luck points for either your Crazy Stash (if the icon is a brain) or Sick Stash (if the icon is a thermometer) each time that key word appears on an active headline. To make a headline inactive, spend toilet paper from your pantry equal to the amount shown on the toilet paper logo in the bottom right of the active headline card. You trigger an immediate effect from doing so, which makes timing pivotal. 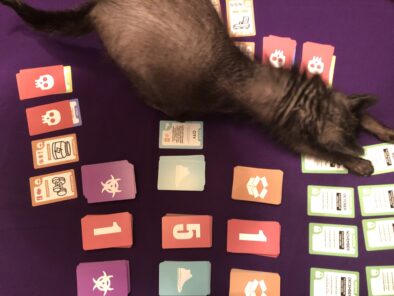 Next, they draw a number of Hoard Cards determined by the length of the game and any effects of Escape Cards. A short game, for example, has each player draw three cards by default where a long game only has them draw one. Some cards that you draw are given to your opponents and hamper them, the rest come to you and need to be keep visibly separated where possible. The items you hoard in your pantry are either cashed it at the end of the game for Bad Luck Points (positive or negative), or prevent you from gaining them during the game. Typically, you want to hold on to identical pairs of cards where able to get more points for them. Hoard cards may also let you search the Hoard discard or deck for a card.

Once all Hoard Cards are resolved, draw a Quarantine Card, which is purple with a biohazard logo. Read the flavor text aloud, then enact the effects on the bottom half of the card. Quarantine Cards can help or harm any number of players when they are drawn. 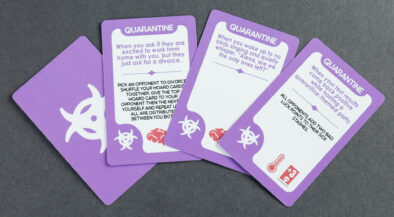 Quarantine cards have flavor text to keep the game grounded in humor. There’s no such thing as ‘over the top’ when reading.

At the end of the game (once all players have gone in the round where the December headline is revealed), players enter the Exchange Phase. This is where they trade in all cards that are in their pantry for Bad Luck points into their stashes. When they are all accounted for, count the Bad Luck Points in each stash, for each player. The player(s) with the most bad luck in their Crazy and/or Sick Stashes gains ten more points. Whomever has the most Bad Luck total after this wins the game overall.

American Pandemic is a light weight game. After the first turn, the rules were barely referenced except to find some exact wording. There was no curve where things became more complex, no skills or tech trees. While the game is art light, the designs are easy to read and mostly color friendly. There are a few cards, mainly the headlines, that can get a little busy but the layout is otherwise good. A short game, especially among experienced players can go by extremely quickly and allows for the game to be paced based on the players.

Getting to the theme itself, this reviewer approached the game carefully, and the cards drawn in test games did not seem to pull to a specific political sway or ‘edgy’ humor.

The game is very luck dependent. There are some strategy elements such as how to use specific Hoard Cards, Quarantine Cards can give you a choice of which player(s) to target, and the use of toilet paper can be done anytime. However you have no way to plan a turn until you draw a card for everyone to see.  There is no long term strategy so much as “this is my status after my latest draw”. Certain things can be done retroactively, such as optimizing which stash gets attention although a lot of that is out of a given player’s hands. With that in mind, the cards might suffer wear and tear from in game shuffling and moving between players after having to be laid flat and separate.

Speaking of which, no card hands, dice, tokens, or anything distinct beyond several different stacks of cards. Some players may not see this as a negative draw, but it lacks a tactile feel for such a lively game.

Finally, because part of the object of the game is to obfuscate how many Bad Luck points you have (players can only examine your pantry), and those points are represented by cards; and also because the entire play area is an array of cards, things can get messy, even before the cat hazards jump in. 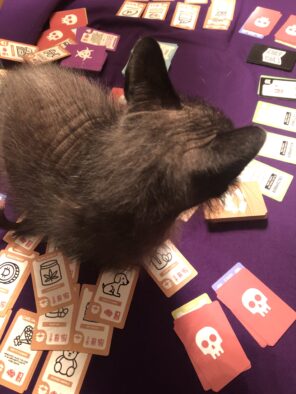 All in all, American Pandemic is an easy to learn and play game, even if the rules and cards might look a little intimidating at first. Its biggest failing is a lack of control of play area, because it is meant to encourage the cutthroat behavior between players – both in and out of games as they can make deals between each other. The biggest drawback to the game is that it can become very disorganized, very quickly with players having multiple, separate stacks and having to keep them carefully divided personally and from other playing areas. One can argue that such a luck based mechanic is appropriate for a party game, as well, even if it leaves as few choices to the players as possible throughout.

As always, the golden question: Is it fun?

Yes. It’s a comedic take on a serious topic. It toys with the irony of people needing to be able to gather safely to play it to make light of a dark subject. American Pandemic is a simple game in a fairly small box for a game of its type, and could serve as a great way to get chuckles in with your friends that you’ve only meme about until now.