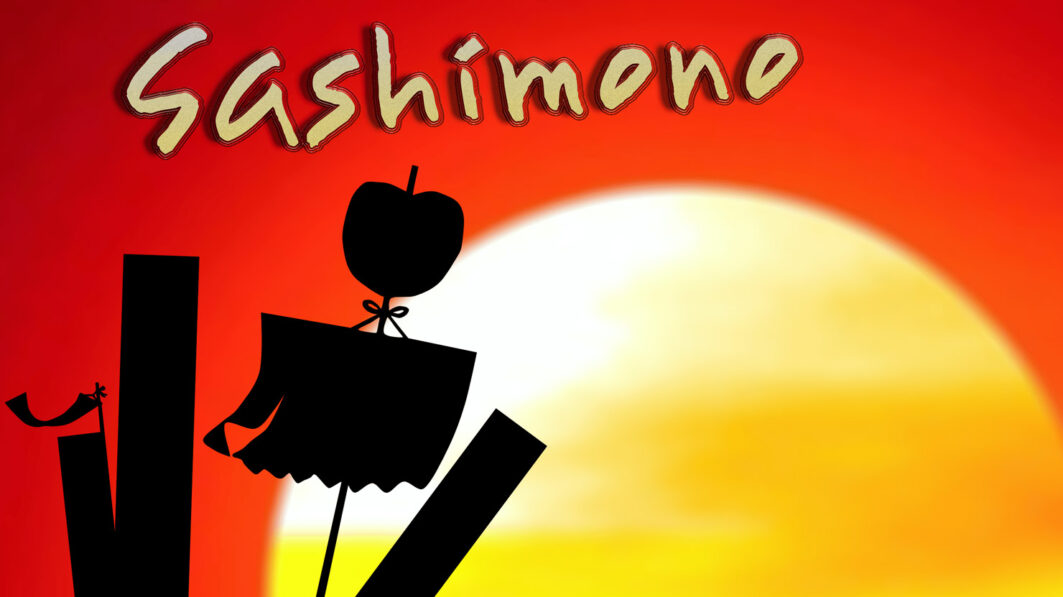 “My game-play intent for Sashimono was to create a “big game” experience with minimal components and play time. The big game feeling is achieved by having every decision you make critical and have long-term consequences – a move you make turn one will be the reason you win/lose on turn eight. And by keeping the components minimal, I’m saving players money and time since setup is quick and there are fewer parts to maneuver during play, making the game faster. Each Sashimono is an entire set of special action options and victory conditions, making that stack of 34 Sashimono a massive replayability element to the game – and playing the game becomes more fun as you and your opponents continue to grow by playing regularly.

Thematically, I found the source material incredibly interesting – far more than I expected during my 2 years of research. My second goal of Sashimono was to make each Sashimono card have a true personality and feel to them, related to their unique histories – in order to have players actually recognize and associate themselves with certain individuals, and get interested in looking them up and learning about these incredible legendary persons. Abstraction was used in favor of fun at times, but if it isn’t fun no one will play it or give it a chance. Anyways the idea is to use fun to make history more appealing/real to curious players.”

Sashimono is a two player tactical card game from Lore Chase Games. The goal is to maneuver your Sashimono (officers) and Kumi (soldiers) in such a way to activate your own abilities and scoring methods while not doing the same for your opponent.

The cards are unique to the game, and while the art is from classic depictions, it does not immediately spark use in other scenarios. All cards are “poker” quality.

Each player has an area called a Sonae. At the start of the game it is populated by a 3×3 grid of Kumi cards, alternating whether they are face up or face down. They then add three Kumi cards to their hand. The next step is to draw five Sashimono cards, then pick three and put the other two at the bottom of the deck. At the start of their turn, a player will decide one of two options: Action or Scoring Turn. In an Action Turn, they place one of their Sashimono cards on the imaginary ring outside of the Sonae – it must directly align with a row or column (referred to as a Line), and you can’t “double park” with another Sashimono, but one can exist at the opposite end of the same line. Once the Sashimono is down, you look at its respective actions, as well as the generic ones that all of them are assumed to have, and decided how to continue. The generic actions are for when there are two face up Kumi with the same type in the line. With two Kiba-Tai, you can start a battle with an opponent’s row of choice. With two Teppo-Gumi, you can start a battle with an opponent’s column of choice. Lastly, with three Nagae-Gumi you can draw two Kumi cards to your hand. Beyond that, each Sashimono has two abilities. Some of those abilities have the “Infinite” icon, which is a passive ability as long as they’re out. The rest are activated once depending on what is in that Sashimono’s line. The other distinguishing factor, is the condition by which the Sashimono “Bows”. When bowed, the card is turned sideways, and if it remains in that position in a Scoring Turn, the player gets a victory point. Bowing conditions can be activated by either player, making thoughtful placement all the more necessary. Some Sashimono also come with a condition that unbows them, meaning they are no longer eligible for scoring. To battle, the attacker counts up the attack values in their row. Each Kumi has its power on the card, and hidden (face down) Kumi count as one power. The player may turn any facedown Kumi face up, which changes their value. After this the attacker may discard any number of Kumi cards from their hand and add one to their attack power for each card. Once all of that is decided, the defender does the same, and the attacker wins draws. Losing by 0-1 power means the loser removes one Kumi in their line. The player that loses by two or more has that choice made by their opponent. There is advantage to changing your margin of loss even if you still lose for this purpose. All lost Kumi, whether for anteing for power or lost in combat go to the bottom of that player’s Kumi deck.

In a Scoring Turn, the player starts by collecting the Sashimono they control that are bowed and removing them from the game. If you do this with at least one, you gain that many victory points then (provided the game isn’t over) draw one more than that number from the Sashimono deck, placing one on the bottom. After this, you may take any unbowed Sashimono back to your hand. If you had no Sashimono in your hand, you must do a Scoring Turn, so this moment to return them to your hand lets you have Action Turns even if you haven’t scored. The second part of a Scoring Turn is to select one of the following bonus actions: You may draw a Sashimono, and place one from your hand or play under the deck; You may train a Kumi of your choice (place a Kumi from your hand on a Kumi that does not yet have this type, combine their stats); Flip any one Kumi then Draw a Kumi Card; or rearrange one of your Sonae’s lines.

No matter which Turn you take, you continue on from it to draw one Kumi, plus one for every empty space in your Sonae. You may then fill the empty spaces in your Sonae from your hand, face up/down by your own discretion.

Play then moves to the other player. 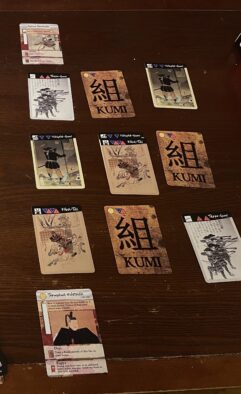 The sonae is each player’s area. In this example, it is a solo game, where a Kagemusha travels around your sonae to determine where battles happen.

From the start, the game requires a lot of forethought and other than maybe your first turn, all actions need to carefully consider your opponent. You can push your opponent into a victory on your own turn if you are reckless. Secondly, the lack of cumbersome shuffling is a welcome addition to a card game. Unless there’s a rather large victory point goal, you are not going through enough Sashimono to get to the ones you discarded, and there are only three unique Kumi cards so their constant cycling isn’t as luck-based as you might expect. You essentially replace everything you lose by the end of any given turn to keep you competitive throughout the game.

One note that must be taken is that most of the art is actually classic art from the same era the game is set in. The Sashimono, for example, have actual portraits of the named officer.

Positioning is extremely important in this game but your positioning in and of itself only affects your own gaming area, and while your draws are important the game relies more on strategy than pure luck such as dice rolls

Lastly, the game is extremely immersive with the terms it uses, including a glossary in the rulebook. 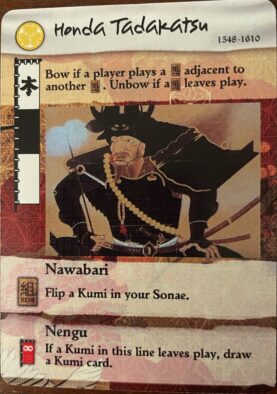 The biggest negative takeaway is that this game requires a significant amount of working memory in the player to perform the best strategy. Also, an astute player can game multiple Kumi loses by the order they go under the deck. Because the Sashimono can be (un)bowed on either player’s turn, it also requires both players to be constantly alert of the entire gaming area unless they want to forget their own scoring opportunities or activate them for an opponent. Thus, the game favors memory almost more than it does actual strategy. For example, in one play session the same player had forgotten their hidden Kumi and went from 1 power to 0 power and it cost them the battle. We also had a number of moments of “oh wait, this ability activated…” because at minimum there are 18 cards in play to track.

Contrary to the positive aspect of the reinforced setting, remembering a whole set of terminology in addition to paying attention to two arrays of cards was a very confusing part of play. This comes from the authentic language forcing the players to track their terminology as well as the expansive game area.

Finally, the game is an absolute cat hazard waiting to happen. It is quite easy to knock something out of alignment and lose its place since for the most part, once a card is out, that’s where it stays. 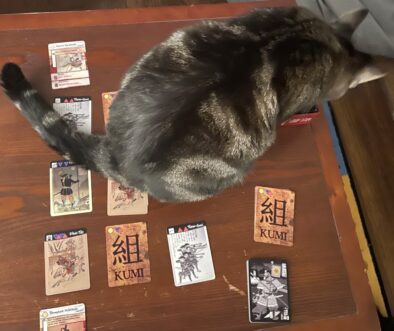 Max plays kaiju with the sonae

As a game, Sashimono’s biggest strengths are that it’s quite a thought provoking game for having so few elements. Those elements, namely the titular Sashimono, can be quite complex depending on their abilities. Winning the game requires a substantial amount of concentration and memory to track which cards were flipped face down, which Sashimono abilities are activated – especially bowing – and what is in your hand to replenish it when all is said and done. The rules themselves are fairly straightforward, with only a handful of choices that are all available from the start. However each card having a unique compilation of abilities is where most of the weight of this game lies.

Is it fun? This reviewer enjoyed the game for being a refreshing take on a cards-only game. It received mixed results from the players it was tested with due to the amount that needed to be kept in working memory rather than the complexity of the game itself. It’s still well worth a try and a unique take on card games.