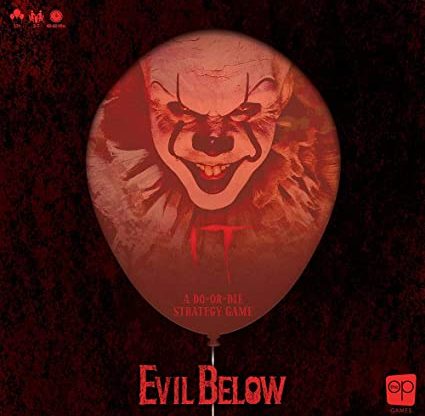 Caught in the Deadlights – IT: Evil Below

Set-Up Ease: Beyond a little card shuffling, there is very little to setting this game up.5 / 5 Gameplay Ease: Beyond taking things slow in the first round, the rules come together quickly 4 / 5 Replay Value: There is not much to the game other than which fairly similar objectives turn up. Most of the replay value is in the theme. 2 / 5 Thematic: Given that this game was developed around a well known franchise, this pendulum swings drastically between a branded money grab and an effort made to match the source material. 4.5 / 5
Overall Rating: Where IT: Evil Below lacks a different game experience each time, and the game relies heavily on luck, it is still a fun game that's easy to pick up and even new players will be able to develop strategies in no time. 7.5 / 10

“The central goal in designing IT: Evil Below was to make every action and decision tense and anxiety-driven. The first thing that happens each turn is the roll of the dice — and that right there is seven opportunities for things to go badly. Next it’s the reveal of any Victim tokens Pennywise might have claimed — and that’s a one-in-four chance of Pennywise gathering power. Then, when you get up the nerve to start attacking Pennywise, there’s a constant push-your-luck mechanic at work that drives you to time your attacks when you think the odds are most in your favor — but that still doesn’t mean your odds are great.

Pennywise is meant to be scary and threatening, and once he gets going, the game can be nerve-wracking.”
– Sean Fletcher, Game Designer

IT: Evil Below is a horror themed co-operative game from The OP / USAopoly.  It is themed around the movies It (2017) and It Chapter Two (2019). The game allows players to take on the role of “The Losers” club from the film – a group of seven teens in small town Derry, Maine, that find themselves terrorized by an entity that most commonly shows itself as a sinister clown.  For the sake of avoiding spoilers for the movies, more depth into the plot will not be discussed below, only the game itself.  Hopefully readers who are fans of the movies will see the nods to the source material, across the scale of subtle to obvious.

Included in the game box you can find the following:

The character standees are direct prints of the characters from the movie, each shaded to the color of that character’s starting location.  Pennywise is an ominous dark grey.  Each of the dice are black, but painted to each playable character color as well.  One side has a balloon, two sides have a heart, and three sides have a hand.  The game board, standees, and tokens are all of a good quality and barely flex under casual pressure.  Due to being customized for a specific franchise and unique game, there is not much versatility for your gaming toolbox.

Beginning each game, every player chooses a Loser, collects that character’s board, and places the standee on the location indicated by the board.  Each character board has a bravery track from zero to five (which starts at maximum), and a special ability. All the bike tokens are placed in specified locations, and all the decks are shuffled and laid out – including a Fight Deck comprised of one attack and six totem cards. Victim tokens are mixed, face down, then placed in each location.  Pennywise starts in the drain pipe in the center.

A typical turn starts with a roll of all the dice.  For every die showing a balloon, reveal either the leftmost or topmost (depending on the location) victim token of the location with the corresponding color.  If it is a victim, then it goes on the victim track on the side of the board. If the token ends up on a Pennywise space on the track, then Pennywise is moved to the location that player is (if not already), and an attack card is revealed and resolved on the spot.  If there is no attack, Pennywise is moved to one of the locations a balloon was rolled for, prioritizing the one with the least victim tokens (most Pennywise power) then player choice if there is a tie.  If the token is also a balloon, place one of the attack cards on top of the fight deck without looking and remove the token from the game. Pennywise wins the game if three or more locations lack any victim tokens, or if any character runs out of bravery, the last attack card is in the fight stack, or the victim track is filled.

The game captures the frantic feeling of gathering resources to defeat a killer before they find you first, and escaping when It does. All of the game tokens are of a higher quality than most games, especially considering that this could have been cheaply made to be sold on the name.  Images are sharp and accurate, and not just a cartoonish proxy of the source material, or poorly used screen captures. There is very little predicting where Pennywise will go, or when a carefully constructed attack plan will get shut down.

As one of its strongest qualities, IT: Evil Below has a shallow learning curve.  Fresh out of the box, with four players of varying experience, it only took one round of play for everyone to start developing strategies. Everyone was immersed, and the (albeit thin) rulebook barely came into play. Yet another factor is that the game is suitable for more than four players, which tends to be uncommon for a strictly co-op game.

Lastly, this game passes the all important cat hazard test.  The locations are all large enough for eight different standees to fit, so it’s difficult for a cat to knock things about. After the below instance, barely anything was moved out of place. 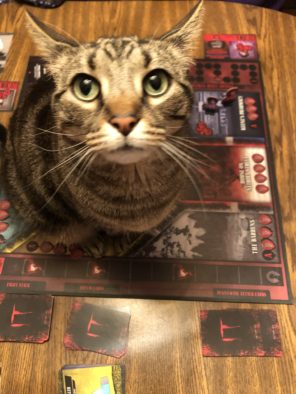 IT: Evil Below is an easily learned and played game that lives true to the franchise it invokes. There are some complications with the color palate, and the mechanic can be gamed fairly easily despite multiple chaos factors. As always, the strongest litmus test must be, “is it fun?” So long as players are willing to let go of a little control by means of letting other players make their own choices and not turning the fight stack into an accounting task, the game is quite fun.  Where the game itself doesn’t change much between plays, it still throws mid game surprises at the players and forces them to think critically. It is worth keeping on the shortlist of games in a group setting.