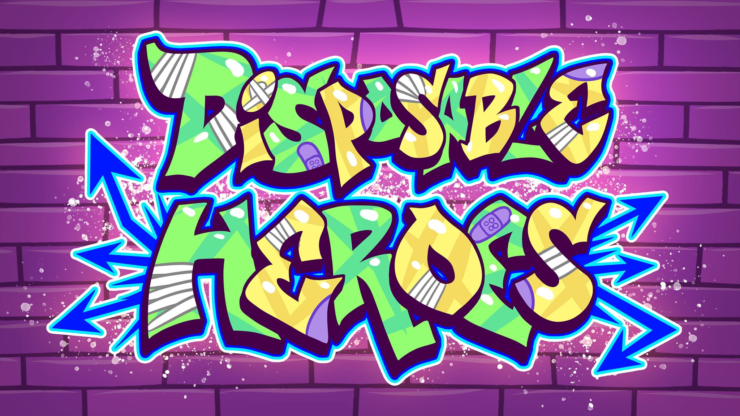 Set-Up Ease: For the most part, this game only takes a couple of minutes to be run out of the box if you know the rules already. The characters are pre-fabricated, which in a game like this takes the most time and other than creating The Package, most of the game is improvised in RP fashion, requiring little setup unless the GM wants to go all out4 / 5 Gameplay Ease: The game breaks down into simple actions with simple rolls. There are a couple of crunchier elements, however it is easy to bypass them. 4 / 5 Replay Value: Since the game doesn't rely on a static board, tokens, or adventure modules, it has a strong replay factor. The drawback is that the characters don't change, although future expansions may assist with this. 4 / 5 Thematic: Don't let this number fool you, it could easily earn a 4 with yet-to-be-released art. The cyberpunk setting allows for a wide variety of interpretation, and to some degree it is very easy to link to whatever character you play - even if they cycle out rather quickly. 3 / 5
Overall Rating: Disposable Heroes has plenty of strengths including an uncommon (albeit popular) theme, an inventive goal, and ease of play including portability. There are some limits, involving some rule checking when switching characters, and it requires a rather creative person to be the GM to keep things both flowing and interesting. All in all, if you have a good group of players the nonstop improv should always be an enjoyable play experience. 7.5 / 10

“Disposable Heroes began life in that ethereal place between 2am and the hotel room at a gaming convention, let to sit for 3 years while a decade of Jet Set Radio fan art and gig economy satire wormed its way into the idea. Now we have this fast paced, card-and-deck based TTRPG designed around emulating the very best of roguelike design, with an incredible art direction and some really exciting mechanics that flip the traditional dungeon crawl on it’s head.” 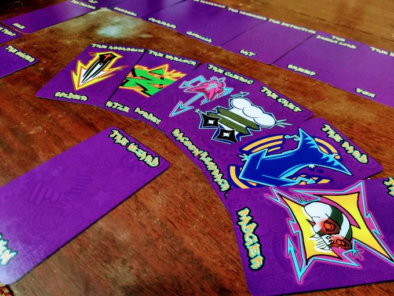 Disposable Heroes is from Sandy Pug Games, run on the Powered by the Apocalypse engine. The game puts the players in a cyberpunk universe of fast paced package delivery. The characters are known as “Disposable Heroes” employed by the “Amazing Heroes Inc.”, which has a habit of taking on rather high risk deliveries so that the escapades can be recorded on their monetized app. Players will cycle through characters using a deck mechanic (which can be randomized or static as the GM wills), and hope that at least one of them survives to make the delivery. At the time of this post, Disposable Heroes is on the last few days of its KickStarter, which you can View Here. The game runs on the Powered by the Apocalypse open source engine.

Disclaimer: A playtest kit has been provided by Sandy Pug Games for the purpose of evaluation. The rules listed below may change by the time the KickStarter is fulfilled 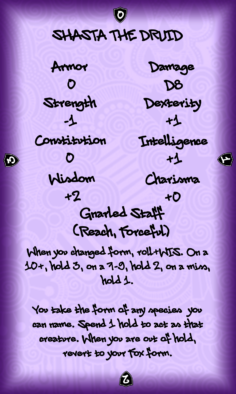 In the game of Disposable Heroes, each character has eight basic stats which range in value from -2 to +2 (with the average being 0).

Beyond that, each character gets an animal, and attributes/abilities related to a class, which almost always rely on a roll to determine the benefits gained, which are called “holds”. For example, Shasta the Druid (right) has the ability of shape shifting. The player makes a roll, and depending on the result, Shasta receives one to three perks of being in the new form. Once the ‘hold’ is depleted, Shasta reverts to being a fox.

It is worth noting that in Disposable Heroes, each Hero has a totem animal and how literally this translates into the character’s portrayal. A character can be an actual animal, a person with an animal callsign, or whatever blend of animal and human makes the most sense for today’s job. This means Shasta’s “fox” form is the default from before shapeshifting could be quite variable. The rolling system in Disposable Heroes is extremely simple. Other than damage, which is determined by a single die roll of varying size, rolls are determined by 2d6 plus a stat. Using Shasta’s transformation as an example, the shapeshift is listed as “roll+WIS”. This means to roll two six sided dice, add them together, and then add Shasta’s Wisdom modifier (+2 in this case). Rolls have three margins. On a ten or higher, the roll is super successful. Most commonly this means not only succeeding at the action (called a “Move”), but getting a bonus affect. In the 7-9 range, the Move is successful without any extra flair. With a six or less, the Move fails and often ends with a penalty. When a character wants to do something, there is a basic Move associated with every trait. It’s as simple as “roll+” with default results if the GM doesn’t have something more specific in mind. Frequently, the bonuses are things like doing stunts for the followers of the company/Heroes. Damage is handled somewhat uniquely in this game. Anytime damage is dealt, the Armor rating of the target is taken away from it. In some instances like enemy monsters or the Package the players are carrying, there is a health value that is reduced. All characters, however have but one point of health. Any hit that doesn’t get mitigated by armor or abilities Disposes of that Hero. A new one must be drawn from the deck to take their place as Amazing Heroes Inc. has a large pool to send forth to do their bidding. Should the available heroes run out (one is taken out, but there are none left to draw), then the package steps closer to doom in some fashion determined by the GM. By the end, if the packages survives, the GM makes a roll+[Package Health]. A 10+ means that the Heroes get a five star rating, and will definitely be hired for another job.

Disposable Heroes is the sort of game that can be played fresh out of the box in relatively little time. The characters are all prefabbed, so there is no need to worry about crunching numbers or the burden of decision taking most of the first session’s playtime. This enables the game to be portable as something to keep in your bag “just in case” or could make a fun one shot party game. Simple rules, flexible cyberpunk setting, and an RPG that is designed to stay energetic are the greatest advantages. The use of cards does not take up much space, and stands up to the coveted “cat hazard” test as long as nobody loses visual contact of the dice.

The artwork so far is color friendly, and the graffiti style art really brings out the personality of how the Heroes may work for an agency but have their own personality. The text remains legible even with the colorful backgrounds. As a note, the artwork is still being drafted at the time of this review.

This may seem a little pedantic, but the fact that this is a reskin on an open license does detract from the game somewhat. The game has enough flavor to stand on its own, and future expansions will allow it to become more distinct. Additionally, the abstract style, while meant to progress the plot continually, could end up making for some slow moments if the GM or the players ‘run out of ideas’, so to speak. It is a common pitfall of most abstract games, and Disposable heroes tries to put enough prompts into its system and setting to stimulate progress. 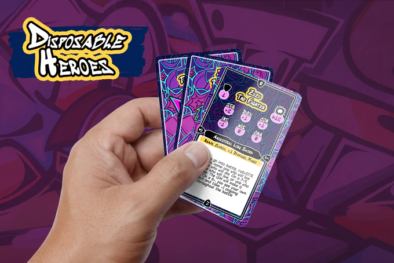 Scoring Disposable Heroes was easy. By the Boardgame Stories rubric, it was easy to slice and dice objectively, and this game that has few components brings a lot to the table. It requires very little to play – the KickStarter is even offering a PnP version so you can keep the cards on a device and reduce used table space, and there are many free apps for dice rolling out there to keep the experience table free if you are in a bind. While there is a rather large open source network (one can use the Dungeon World SRD for rules to inspire more characters if they really want to do the homework), the game is essentially rules light and very flexible. Its main flaw is that abstract games can get bogged down. Players can get distracted and forget where they are in the story, GMs may not have planned for certain contingencies, the right character for the job might be knocked out early in the game, etc. The game is still partially in development, but has a lot of promise in its Beta stage.