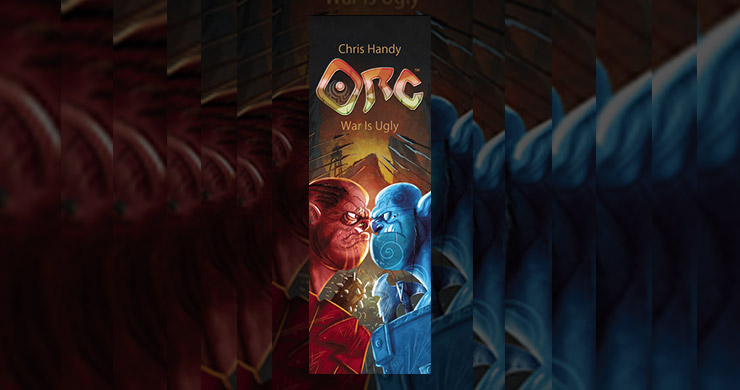 Orc is a 2 player game with really nice art and vibrant colors, in which you send your Orc troops to conquer and establish their dominance over six territories. This “huge” box contains Orc cards split into two parts with different colors and numbers (1 and 2 only) so simple!

You begin by setting up the board that represents the battleground which consists of six territories of different color each. This means you place 3 Orc cards as shown on the photo and on each side you place 4 face down cards (these represent the draw piles). 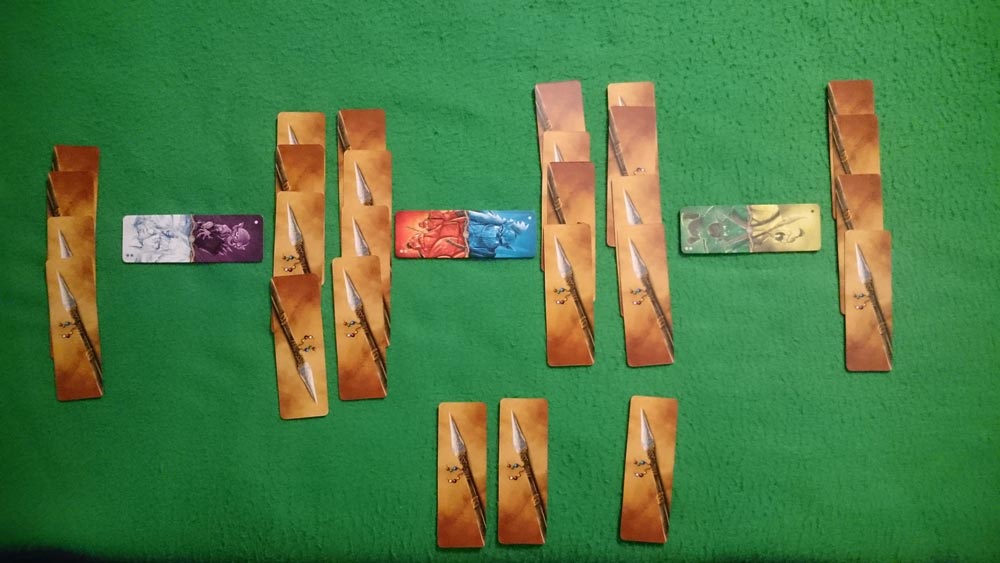 After this 37 (!) second procedure there are 3 cards remaining. The person who didn’t set the board up gets to choose 1 or 2 of these cards. If he picks 1 card he gets to go first. The other player gets the rest cards and the game begins!

Taking turns, each player places his Orcs in the territories he would like to conquer. He places cards from his side of the territory, anywhere he likes except if there’s a matching color in that spot (territory and opponent card). The color here is important because the player can only place the consequent cards of the matching color in that territory, so as to strengthen his dominance. 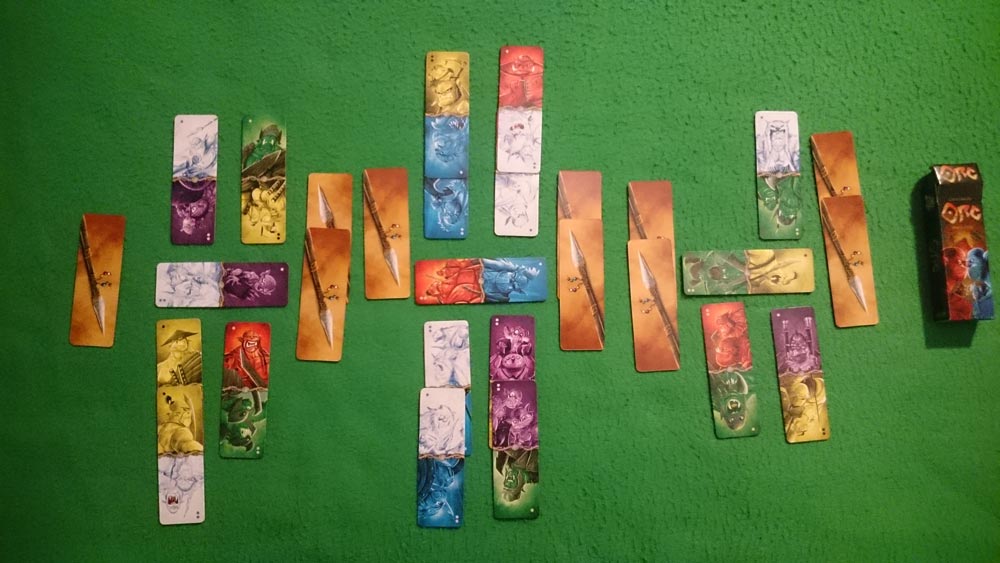 If he places the card in the direction showing 1 Orc he gets to draw 2 cards from any of the draw piles. Likewise if he places the card in a way that shows 2 Orcs he gets to draw 1 card! When a draw pile is depleted then the battle for the corresponding territory occurs! The player with the highest number of Orcs deployed in that territory wins the battle and places a card on his side face down to indicate this. The game goes on until all territory battles have been fought. 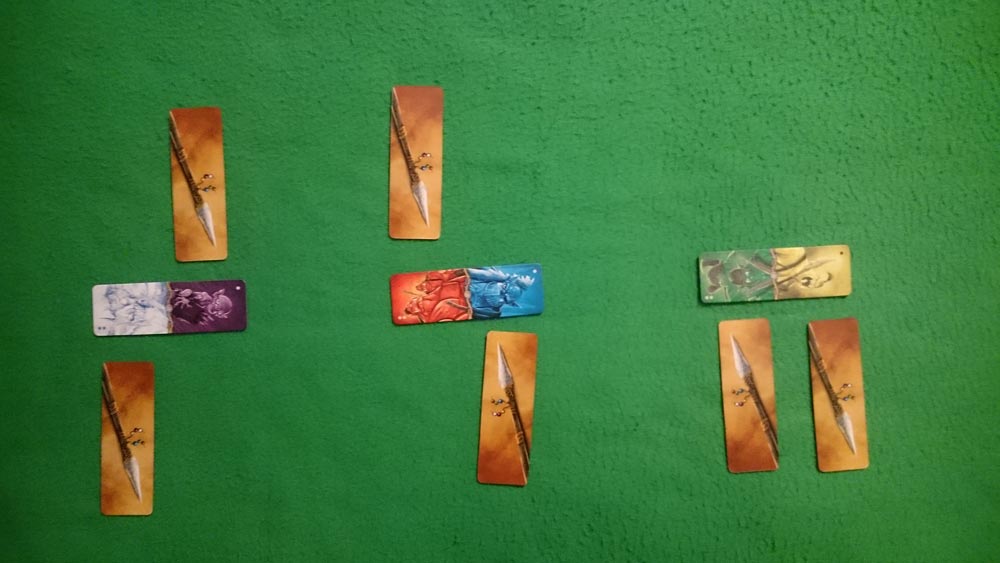 Then, players score the points they have gathered. Each players adds up:

The value of the territory (1 or 2) and the values of the cards on his hand with the matching color of the territories he has conquered. The player with the most points is the winner of the game! 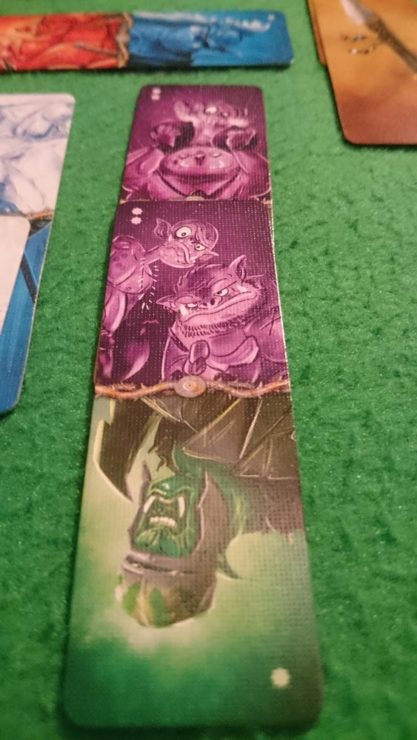 When I saw this game I thought it would be nice to have it in my collection as it was quite interesting and the size intrigued me to buy it as I wanted to know how can this game work well for me! When I started reading the rules it remind me of Schotten Totten by Reiner Knizia (another great game for 2 players) as the concept is basically the same. When I finished the rules I couldn’t believe how much there is in this game and when I played many many times I thought I have to write something about it because its really worth mentioning and giving it a try! 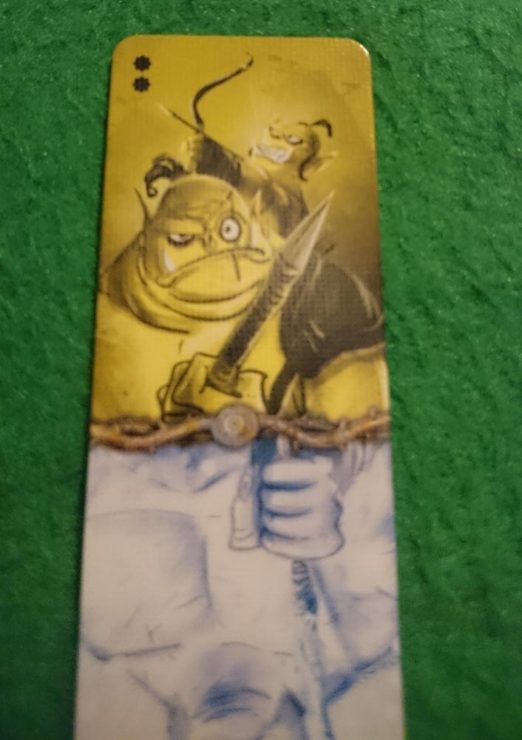 I am truly amazed by the design of the game and of how much did Chris Handy fit into that box! The box contains only Orc cards which are also used to form the Battlefield using the colors and the values on the cards. This means different board every time because the values are not the same and the cards used may not be the same.

During the game you have to watch your opponents moves, plan carefully where to place your troops, on which side and the most important plan thoroughly the pile(s) from which you will draw your card. If you don’t be careful enough the opponent might take advantage of this and fool you out and take the territory you thought you had for sure!

Also you have to think which side of card to deploy in order to draw more cards or to establish your domination on that territory. If you decide the side of the card then comes the issue of which cards to hold back on you hand and which to deploy! Cards on your hand as mentioned above give points to the matching territories conquered. So instead of deploying Orcs you can hold back and wait to score these points at the end of the game which change the game and lead you to victory! 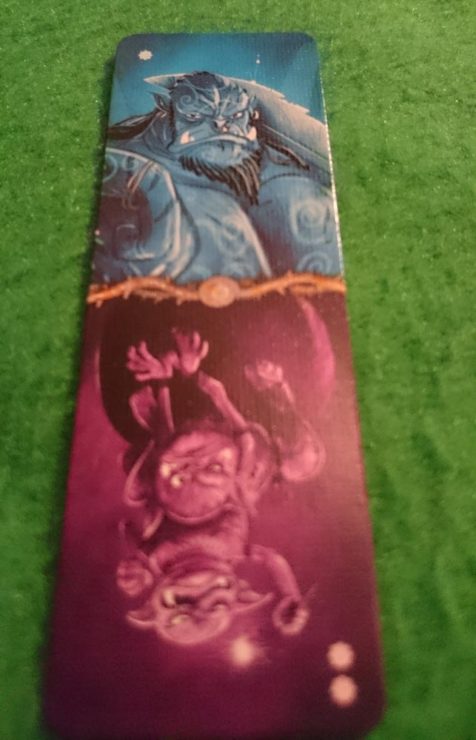 If only this game lasted longer…. 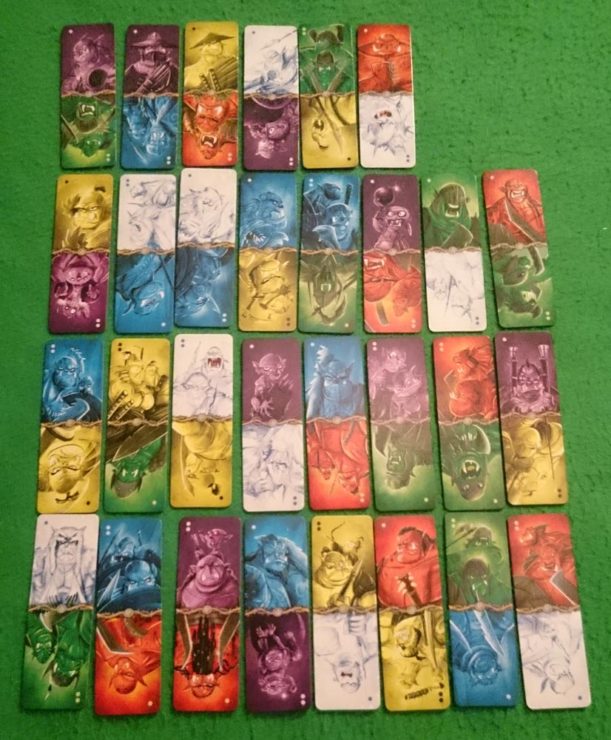