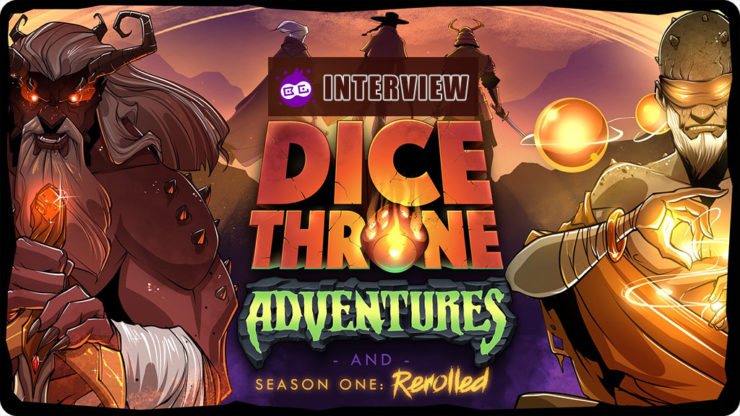 We had the chance to interview 2 of the 3 designers of the game Manny Trembley and Gavan Brown and they told us some really interesting things about the game and future plans!

Manny: Dice Throne is a fast-paced dueling game. We often compare it to Fantasy combat Yahtzee. That typically gets people’s attention. Similar to an arcade-style dueling game, you get to pick your hero and use your board, cards, resources, and dice to attack your opponent. It’s a super easy game to learn but I still play it 1000’s of games later because I love the variability and deep strategy.

Manny: What I love about DTA is that while it is a unique experience it is also fully Dice Throne. As a person who prefers dueling, I’m pretty excited that DTA didn’t fundamentally alter the core mechanic of Dice Throne. So all the people out there currently playing DT will have a fresh way to use their favorite heroes.
Gavan: This is the most innovative thing about DTA. We have actually added an entire genre of playability to all Dice Throne characters.

Manny: Mine is Boss Battles. I love fighting. So battling an epic boss makes the whole thing really exciting.
Gavan: The loot system! We implemented a loot lottery system that feels and plays similar to games like Diablo. I find myself audibly cheering when I roll a 20 on a loot drop!

Nate: DTA is an expansion that requires pre-existing heroes. There are no heroes that come with that game. We made a conscious choice to do this because so many of our fans already have S1 and S2. It felt more natural to create an expansion for the game they already have.
Manny: We have more heroes planned for the future so all those fans of the DT duel will be able to expand their roster.

Gavan: From a game design perspective, one of the biggest challenges has been compatibility with existing content. We need to ensure all content and mechanisms in DTA are compatible with all the existing heroes.

It has also been a huge challenge to keep the footprint of the game to a reasonable size! A Dice Throne hero takes up a significant amount of table space. So when we add a huge coop dungeon crawl to the center of the table, we need to ensure that we are as space-efficient as possible with all the content.

Manny: I am most happy about how players that know and love DT have a brand new way to experience their favorite heroes. The game plays very differently than normal DT. So I felt like I needed to relearn how to play my characters.

Manny: I love spending time on FB talking about games, helping players learn new things about interactions, player abilities. But also, when a person shares their story about they finally have a game they play with their significant other or their children. I’ve heard stories of DT being used in rehab centers and kids camps. The social engagement is huge. Sure, we made a game, but we also are providing a way for people to come together. I can’t think of a game where my mom, wife and 2 young boys could all play a game together like Dice Throne Adventures and come out the other side, excited to play again.

Gavan: I love it when fulfillment begins and we start to hear reports of people receiving their games and experiencing it for the first time.  It always gives me great pleasure to see how our games have impacted families and brought them together.

Manny: Barbarian. No other hero comes close for me. Some people get hung up on his simplicity. But that is part of the joy. I’ve played 1000’s of games with the Barbarian. I still enjoy the hero and exploration of how he battles into every hero. And now in DTA, I get to be that meat-head leaping into battle!

Gavan: The Paladin. I love a challenge. The Paladin to me has the most interesting dynamics and is the hardest hero to play well.

Manny: I can’t wait to see more heroes. We have so many ideas for our ever-expanding roster. I’m firmly in the camp of never having enough heroes.
Gavan: More heroes, more modes… and eventually TV series, movies, and world domination!