Enchanters: East Quest is up on Kickstarter and it has been funded in less than an hour! We had the chance to get some inside info by the creators and publishers of the game!

– For those who are not familiar with Enchanters, what kind of gaming experience does this game offers?

Enchanters is a quick 2-4 player card-drafting game about creating magic items. When I say quick I really mean it. It is quick to explain, quick to set up, a player’s turns are quick and the whole game can be wrapped in 15 minutes per player.

The gameplay goes like this: Players put together a pool of cards combining different Kingdom Decks each consisting of unique Items, Enchantments, and Monsters. Then they lay out the cards on a Journey Track. Then they buy cards from the track using Crystals (currency in the game). They can also rest to gain crystals and heal wounds.

Cards go into two stacks: Items (Longsword) and Enchantments (of Fire) making unique and often hilarious magical items. Players lay out cards in a way that always leaves the bottom symbols of previous cards visible. All visible symbols count toward players Attack and Defense. When a monster appears Players can go and fight them by comparing their stats with Monster’s stats. That is most things you need to know about the game.

Another thing that we’re proud of is the variability and replayability of the game. Each game you pick one Village where the action takes place (out of 40+ Villages) and one deck per player (out of 20+ decks). You can also pick an Overlord who is a big boss sending minions your way (also 20+ cards). This alone makes thousands of combinations and that’s not counting modules and variants we came up with like Wound Deck, Event Deck, Banners and Classes.

– What inspired you to design such, let me say, an addictive, and fast-paced system?

I’m a video game designer and I used to be a great RPG buff. The core idea for the Enchanters came to me when discussing how ridiculous magic item generators are in games with a friend. Take any old-school CRPG and you’ll see items like “Godly Plate of the Whale”.

Mechanically Enchanters was inspired by some of my favorite board games. The first one is definitely Smallworld. I loved the way the Race Banners and Special Powers combine to make a thematic whole. Another one would be the Eight-Minute Empire, which inspired the way buying cards worked and to a point how cards are stacked on top of each other. Finally, the Smash Up game inspired me to structure game with different Kingdom decks, that have their own mechanics.

We gave each Kingdom Deck it’s own unique theme and a sense of place. It is never just a random list of Item and Spells. But having said that, we do not push these stories on the players too much. Rather than that, we want players to forge their own stories. We love these moments of emergent storytelling in games when on turn 10 a player declares he swings his Backpack of Stone and defeats the Ogre.

– What was the greatest challenge that you faced during the designing and development of the game?

Getting the project off the ground was definitely a challenge. Before we struck gold on Kickstarter, we had some dark moments trying to release the game in Poland. We ran a crowdfunding campaign on a local platform and we were met with very moderate reception. We tried to push the game to stores in Poland and it turned out to be a very tedious task – basically calling each shop we could find and pitching the game to them. This would tire us out and made up a bit disappointed in the endeavor. At this time it was still our after-work project, nothing else. Our first Kickstarter was basically a hail-mary for the project if it would fail, we would probably have given up.

But the first campaign went great and now here we are. As of 2020 most of the team had already quit their jobs to focus on making board games, which is a great achievement in my book.

– Gindi has 4 successful Kickstarter campaigns already, with multiple extra content and expansions for Enchanters. Were you expecting such a success?

It is funny you ask about this. Just the other day I was showing the game to a friend who has never seen it and I realized just how big my game is. It was an amazing feeling.

As for the success… We really hoped for it, but it is a thing you can never expect. At first, we went on Kickstarter as complete amateurs and we were stressed immensely by the whole endeavor. The latter campaigns were much more predictable, as we had some experience and a solid base to start from.

– Mythic Games are launching their new line, Phoenix Line, having your game as the first of the line. What are your thoughts and feelings about this partnership?

For a long time, we thought of getting a publisher involved in the game. We would write some companies to make meetings in Essen, make Skype calls, the whole nine yards. It never went anywhere, all talks would hit a wall at some point. We basically gave up on the idea. Then out of the blue Mythic Games contacted us. It was super exciting and I feel we reached the agreement in like a week.

Our partnership with Mythic Games barely started, but I can already say we love their professionalism and enthusiasm. They offered us a very solid deal with a lot of respect for our creative freedoms. We really hope they will help us with their reach and marketing experience and that it will bring new players to the game. Those were the things we always struggled with and we believe Enchanters deserve a wider audience.

– This collaboration will bring to life a new expansion for the game, Enchanters: East Quest! What new elements will this bring to the system?

In short: Katanas, kung-fu and a lot of anthropomorphized animals. And quests!

We are introducing 6 new Kingdom decks, which bend the rules of the game in new ways. All are based on different aspects of eastern cultures. Mechanically they introduce more abilities that have a staying power in the game. Previously we would go light on those so that the players are not overwhelmed by the number of rules. But we figured this is 4th title in series and we can make the game more advanced.

As for the quests, we will have special Quest Cards, which players can pursue during the game for additional rewards. This is another module players might include in their games like Wound Cards or Event Cards.

– What is the mechanic-element of the game that excites you the most?

I’d say it is the simplicity of it that excites me the most. Even with all those expansions, we managed to keep the game clean and simple. At the same time, I always manage to find ideas for new decks that twist the game around. I’ve spent something like 6 years developing this game and I still can’t get enough of it.

– What else can we expect in the future from the series?

We have some wild ideas about where to take the game further. Definitely, new kingdoms to visit, new artifacts to find, new Overlords to fight against. Something that has been on our mind for a long time is expanding the brand with another game set in the shared universe. Something that is still set around creating magic artifacts, but has a different flow to it. Maybe an adventure game? We will see.

Thank you and good luck with your awesome campaign!
The Boardgame Stories Team 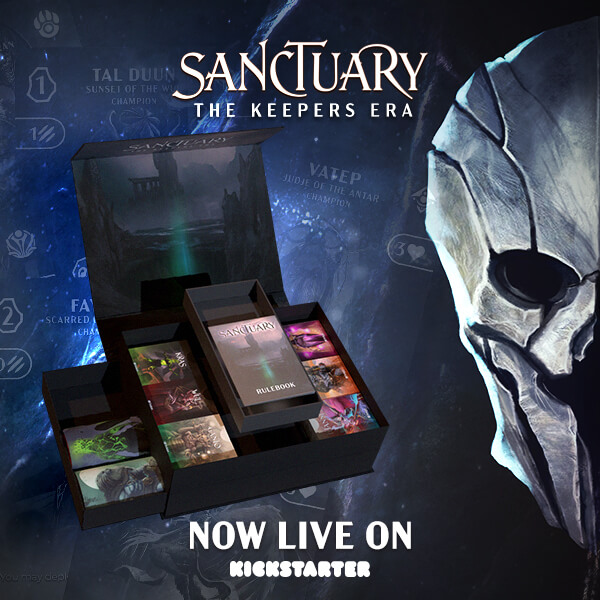