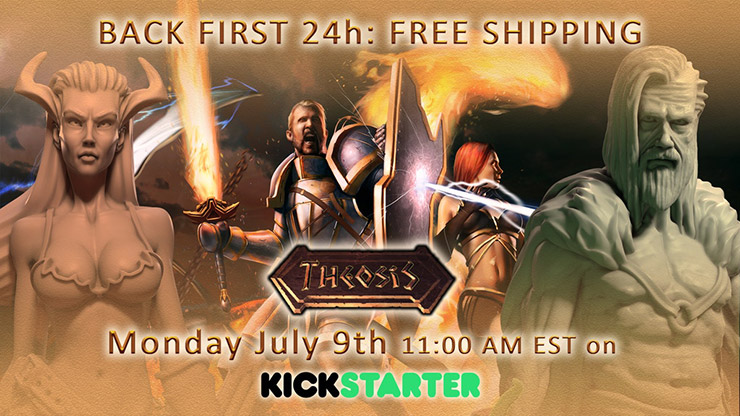 Theosis will launch on Kickstarter on Monday July 9th at 11:00am EST. It is the first game by Dreamcraft Games. So, for starters, let us know about the company and its vision!

What inspired you to split the game into two quite distinct phases? The preparation and the actual arena battle.
First of all congratulations on your work on Board Game Stories. You are doing an excellent job and we are sure this is just the beginning.
Now on the two distinct phases. We are fans of skirmish battles and tactical combat as we love the adrenaline rush that combat has to offer. However we really love more Eurogame-style worker placement games. Most of all however our background was from role playing games. We wanted to bring into a board game the experience of preparing for combat and then actually the arena combat itself. In order to do this we combined the two distinct modes in one gaming experience. It turned out much better than we expected!

Thank you for your kind words! We do the best we can to provide quality content to the members of the community and to all board gamers throughout the world.
What was the greatest challenge that you faced during the designing and development of the game?
When trying to emulate combat and trying to insert depth into the tactical and strategic elements of the game, there is a great threat. The game might become too slow. No one want to leave combat to read and understand how a specific skill will work. Our priority was to keep the game fluid, fast and let the action surge take hold of the players. Therefore our most important challenge is to have depth in the strategic decisions of the game while at the same time have these options be fast, easy-to-read, intuitive skills that will not hinder the fast-paced action of the game.

As the game is enriched with a beautiful lore is there any character you like the most and why?
I would have to say it is the Necromancer. His goal was a noble one. To save his family by any means necessary. The dark path he chose led him to dark places. He did not understand how the means to the solution changed and became an end in itself. His clarity now is distorted. He has raised his family as undead and considers this a success, not having the ability to understand the difference between saving a life and condemning a life for eternity. He is lost and I cannot see any way for him to salvage whatever has remained of his soul.
This and also his Vile Surge is amazing. I cannot stop thinking as a power player.

What kind of gaming experience do you want to create to players and for what kind of gamers is it suitable for?
We did not design this for the casual player. The game has a really fast learning curve and you can play and enjoy it right from the start from the first game. But you can understand how to win and strategize from the second game as possible tactics start to unravel.
Now the gaming experience in the first phase is a “cold war” type of thing. You see how your opponent is preparing for battle and try to counter it. If my opponent concludes a Warmonger Quest and gains the Fireball Power, I need to find a shield fast that grants me Fire Protection. At the same time, I have to study his Heroes and derive a way to penetrate his defenses.
At the second phase, the lies are over. We are at the Arena and we will have to deal with how the game is set. We will have to outsmart our opponent with the way we use our Powers and gain the upper hand. We want the battle to be fast and with a continuous flow full of adrenaline and laughs while we tease each other.

What is your favorite element or mechanic of the game?
It clearly has to be the “Take That” mechanic. A mechanic that is really targeted upon these days. Do not get me wrong, I love co-op games. Our second game is coming to Kickstarter in the following months and it is a co-op game. However the teasing and laughing that the “Take That” mechanic has to offer has to be acknowledged. We play games to get away from problems, to have fun with our friends. Outsmarting them and turning the tide at the last minute is a strong experience and it will definitely lead to a follow-up phone call the next day continuing to tease him with what happened the Game Night before!

Theosis supports free-for-all and team Vs team modes. Which one do you enjoy the most?
It will have to be the 2vs2vs2 Game mode. Three teams of two people. It is the most asymmetric that it can get and alliances will form and break continuously. You never know who will prevail until the end as there might not be player elimination. There will be a lot of Heroes standing but only one will be able to stay at the center tile of the arena at the final round.

Is there anything about the crowdfunding campaign that makes you nervous?
Of course there is. I am terrified. Kickstarter used to be something more romantic. However these days there are really incredible productions out there. Look for example at the Solomon Kane Kickstarter Video. It was a master piece. Really amazing. We are going out with our first project. How can we compete against that? However we have a sound game and we are really proud of it. We will show it to the world and hope for the best!

What else can we expect from “Dreamcraft Games” in the future?
The games that we were designing all these years… we really want to get them out there. To show them to the world. We are aiming at bringing these game to life. However we do not want to rush things. We want to try to achieve quality in production. We are gamers and we will respect our fan base the same way we demand that we are treated when buying a game. We will take things humbly one step at a time. Hopefully we will be able to contribute to the Gaming Community with fun and exciting games. 🙂

Thank you and good luck on your campaign with this great looking game!
The BoardGame Stories Team