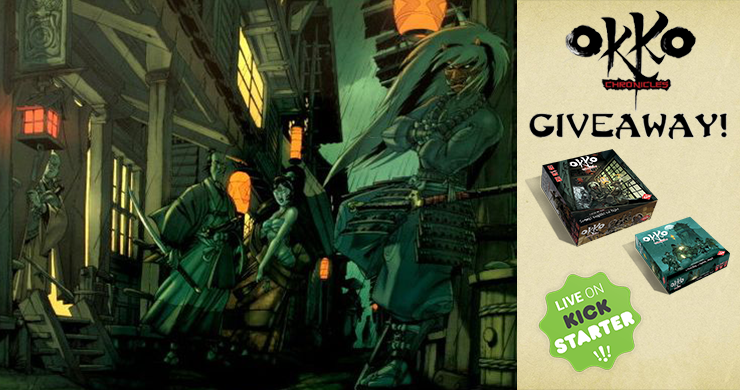 Giveaway and Interview of OKKO Chronicles!

Okko Chronicles is NOW up on Kickstarter! Visit the page and see this amazing campaign with impressive components and really cool miniatures!

BoardGame Stories has been following OKKO Chronicles since day 1. We have gathered all the updates and components from the articles published and you can find them here!

Below is an interview with the designer of the game to give you more information and insights of OKKO Chronicles!

First of all, let us know a little about your initial design, the Chronicles series. What inspired you to work on the system?

Hello everyone! I always been a supe heroes fan as long as I can remember. I also worked for quite some times in the boardgames industry. So for me, it was obvious that I would make a superheroes game one day 🙂
In addition of that, there was not so much games of SH without a licence when the “genre” started to really grow with all the movies released by marvel, warner and now disney. I though there was really something to do…
The basic of the gameplay came quite easily but there was a lot of things to work on to make the mechanic really easy to take in hand. Also, it was really important that the game stayed really immersive for the player in all of its aspects.

Did you know about the OKKO universe before working on this project? How did you feel about incorporating it into the Chronicles system?

Of course! I worked with Hub on the first game project and I read all the albums !
The idea of putting a new background on the chronicles system came by itself one morning while I was shaving …
I remembered that working with HUB was very pleasant and since the first game, we stayed in touch. He is a hard worker but also a good listener and best of all, a wise man ! Also, the Okko series came to its end and I know Hub is a heavy player! So, I though that we could continue the adventure with some new games.
I made a presentation file and send it to him. The idea seemed to seduced him and here we are …

Which was the most challenging part in the design process while trying to bring the two worlds together?

The idea of my game is really to be immersive. Players should live an adventure rather than being in a competitive game. I come more from RPG than from Cathane …
The Chronicles system helps a lot to play a character but there, it also has to be different from Guardians’ Chronicles. I really did not want to just put a new background on an existing system. So, with hub, we kept the basics but we add a lot of specific gameplays according to his universe.

Which is the most interesting difference compared to the Superhero versions of the game?

In fact, each game of the chronicles line has the same basic rules (how to move, how to attack, how to manage its character) but there a seconf layer of rules (in general, related to the adventure that the stand alone background) different in each game.
For exemple, in GC1 the heroes will go into a bad guy lair and fight against him and its traps. In C2, the Heroes will fight among themselves to be the ones who defeat the villain managed by the system and be the Heroes of the day !
In Okko Chronicles – the water cycle, I wanted to put in place the basics of the serie : Okko and his friends hunt Onis all around Pajan.
So, with Hub, we created a system of inquiry. In each game, Okko and his friends are in a palace and have to find behind which civilian the Master Oni is hidden. Of course, they will have to fight their way in ! Your katana will have to be the sharper as possible !

Getting to know the OKKO universe (or after working on that, if you were already a fan), which character ended up being your favorite and why?

Well, I kind of like Setsuka. She’s not a major character but I like the way she’s stubborn. She is some kind of pain in the ass for the group but she’s also a fierce warrior and a great commander.
Hub cut her second arm and burst her eye at the end of the cycle of earth but she stayed proud and effective !

What kind of gamers will enjoy this game the most, according to your opinion?

As I said previously, HUB and I played a lot of RPG when we were young. For me a game is more a good time you experienced with friends than trying to be competitive. A bit like when you read a book, a comic or watch a movie.
But, it’s also a miniatures game where you ll have to be very strategic and ressourcefull if you don’t want the story to end in tragedy !

Will OKKO Chronicles follow the story of the comic book as its predecessor or there will be other adventures for OKKO and his companions?

This new game follow the path of the first cycle of the serie : the cycle of water. Here the goal is to  describe the basics of the story. Okko and his friends hunt some Onis unmask them and destroy them 🙂
Of course there will be different scenarios and secondary missions but that’s what the game is talking about.

HUB is the creator and artist of the OKKO Universe. To what extend will he contribute to the Chronicles? Will he create the game’s art exclusively?

Hub is really implicated into this project. He made tons of new arts (character design, object cards, cover, new character …)
But not only ! He is also a gamer and help me a lot with the rules and the gameplay !

Also in the next few days, we will have an interview of HUB the creator and artist of this exciting universe!

The Red Joker is giving away 3 copies of OKKO Chronicles (Samurai Pledge)!
(1 Base game + 1 Expansion + All unlocked stretch goals) 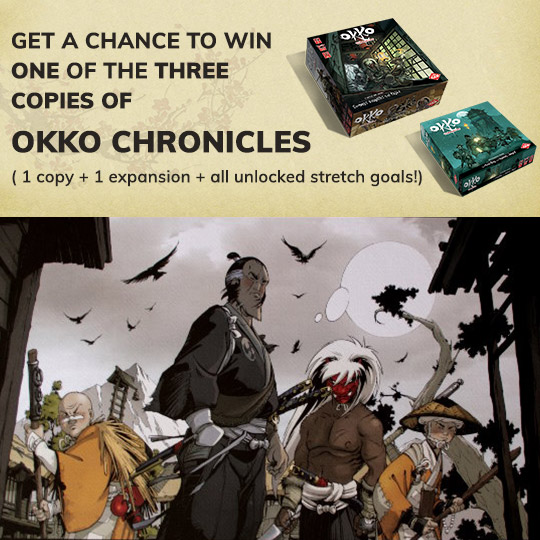 The games will be given away and shipped – if OKKO Chronicles gets funded on Kickstarter – by The Red Joker. The winners are picked randomly and will be informed within a week after the draw! All giveaways follow BoardGame Stories’ Terms and Conditions!