Set-Up Ease: Experienced players might not even need all of the components to set up. The only hang up is sorting how many location cards will be included and selecting samurai.3.5 / 5 Gameplay Ease: Decision making and economy can be a complex subject for players new to tabletop, but ultimately this game is not crunchy. 4 / 5 Replay Value: Starship Samurai suffers slightly in replay value. Getting the same samurai can lead to repetitive experiences. 3 / 5 Thematic: This one is hard to gauge. A lot of effort was put into giving an outline for the personality of each clan the players want the allegiance of, but the mechanics don't factor any of that personality in. The art and minis are quite enjoyable. 3.5 / 5
Overall Rating: The game clearly has room to grow, and there is an expansion available at the time of this review. The game's strengths lie in its art and theme, and keeping players in the game. It suffers most in that its randomization can get stale. 7.5 / 10

“Starship Samurai grew out of my love for mech anime’s such as Gurren Lagann and Gundam. I noticed that there wasn’t much representation for this theme in board games and wanted to see if I could create something with simple mechanics that packed a lot of punch. Each turn needed to feel like it could change the course of the game. Though the development had its ups and downs I am proud of what we where able to put together and I feel like we accomplished our goals of bringing the Lotus Galaxy to life.”

Starship Samurai is a sci-fi strategy game produced by PlaidHat Games. The game takes the form of a space opera, where two to four players each control a faction vying for the support of a handful of clans, while clashing with each other militarily.

Each player starts with the same resources:

From the start, the only difference between the players is which two samurai they have. Each one has a different ability that will sway the logistics of the way they play their orders. In the middle of the play area, where all players can reach, goes the Alliance Track for the score and allegiances to be tracked, a number of location boards equal to the number of players, a stack of location cards (the number of which also depends on the number of players) a shuffled stack of Action Cards (which the aforementioned “Change Strategy” and “Elite General” are considered), and a pile of wealth tokens. At the beginning of each round, the players get their order tokens, move any units in their graveyard to their unit supply, and a location is drawn from the location deck for each location board. Each player, starting with the one possessing the “First Turn” token, and going clockwise, selects one of their order tokens and places it in the slot next to one of the orders on their player card. Based on the value of the order, and any wealth tokens that player spends when placing it, they receive a proportionate bonus into one of the following orders:

Once per turn, either before or after the order, the player in question will be able to play an action card if it is of the “Order” type. To play any action card (whether Order or Battle), there is an associated cost. The cost is either wealth tokens, Honor points they have attained, or sacrificing ships you control.

For starters, I am a sucker for most things mecha, and samurai mechs reminiscent of space opera anime are quite a draw. The game is easy to learn, especially with a veteran player around. It only takes a turn or two in the first round to really get a grip on what a winning strategy for a player would look like. Starship Samurai can also play very quickly with players who know what they want to do. The fact that the losing parties leave their units in play for the next location, puts the winner of a battle at a disadvantage for the next round in exchange for victory points. It’s a nice mechanic that makes it difficult for one player to run the whole game. Lastly, the fact that all units are available every round helps prevent players from being too reserved, and a lost battle is not an early end to the game. 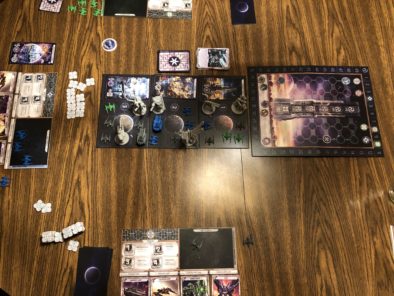 With more players, the action becomes a lot more intense

As always, a game must have its cat hazard level gauged. In one trial game, a single cat jumping up sent the entire playing area askew with no effort. Simply landing on one board and caroming it into the others disturbed the whole game. As a matter of mechanics, all of the maneuver versatility rests in the action cards. Despite the wide array of things the cards can do, the effects can be quite limiting. When the game features only two players, the element listed in the Positive Aspects about the losers having advantage in the next battle becomes a disadvantage. With only two locations, the players just seem to trade the locations off since it is far easier to take an unguarded position. When attempted again with three players, the game took a different life and the mechanic worked as intended. However, with more players, action cards become more of a limit. If you attempt to seize all four locations, you could be spending four battle cards in a maximum hand size of five. Not only are your forces spread thin, but you have fewer (literal) aces up your sleeve.

Starship Samurai is a fairly well balanced game that relies on cutthroat mechanics and a central deck of cards to win. The player immerses into a space opera as a skin for rallying support and showing military power. The rules are simple, and turn to turn conflict rarely results in a slippery slope, which keeps the game exciting and fast paced. Where it lacks is in variety. No new powers are gained during play, only the action cards that must be spent and gone. The layout of the game puts the most vulnerable pieces in one small spot, and becomes a cat hazard.

Bottom line as always: Is it fun? Yes. The game is enjoyable, especially with other gamers who enjoy the same flavor of genre. We found ourselves congratulating each other on power moves rather than lamenting the losses.