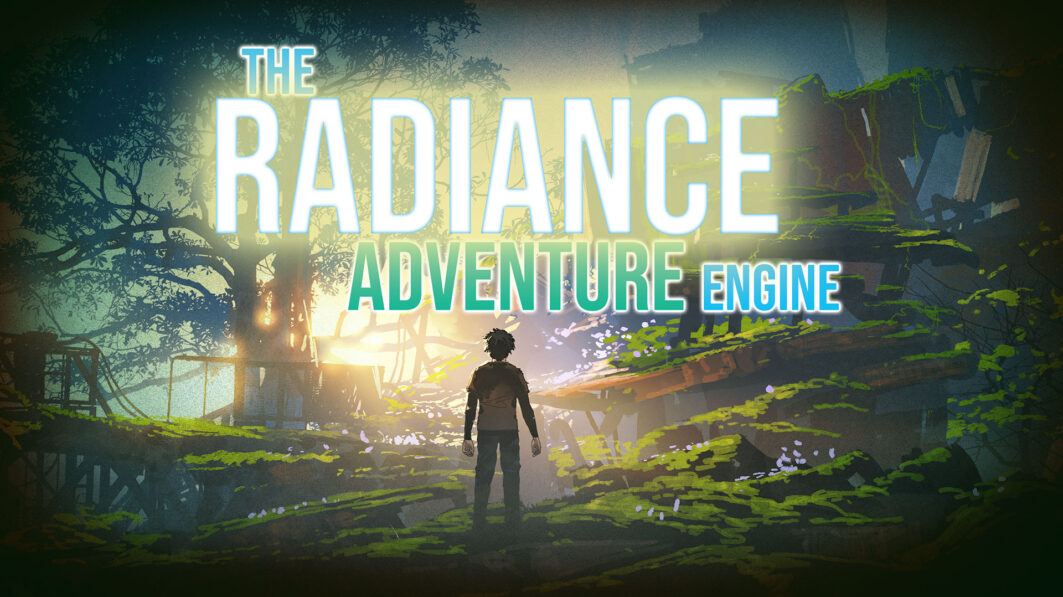 “The Radiance Adventure Engine is a labor of love that started 4+ years ago that was as an attempt to fix two problems. One: having dozens of RPGs that I wanted to play, but could not find game groups for. Two: spending time in hotel rooms while on business trips and being bored out of my skull. Early versions of Radiance were very much oriented towards traditional task-style systems. But, recent versions have incorporated newer RPG ideas of increased player agency and narrative focus. Radiance is all about the story and – though it has its own mechanics for managing the ebb and flow of tension – leaves the RPG business to the RPGs. Radiance isn’t going to introduce new monsters, new game systems, or a list of spells – it is solely focused on helping you build one hell of a story. We get asked the question a lot of whether it’s a GM emulator. It is NOT an emulator. The tag line says it all, you are both the gamemaster and the player. This was a design goal of mine, as I find emulators and roll tables to be far too limiting. Radiance is an abstraction of the gaming and storytelling process allowing your creativity to be the true engine and Radiance to act very much as a writing prompt does for the writer.

“The Shine Storytelling Engine is a much older creature, being nearly two decades old. Shine came about as I struggled through my first few Nanowrimos (an event that I cannot plug enough for casual and aspiring writers). I wanted something that made the process a bit more loose and fun. Everyone seems to have an opinion on “writing structure”, but my theory of storytelling is less about “structure” and more about “common human patterns”. We read (and write) stories to witness those common patterns (love, loss, etc) and then feel things about those patterns. Over the years, Shine has morphed to include lessons learned from other writers, input from a few academics who study storytelling, and a lot of new information on cultural story forms outside of western traditions.

“I have always wanted to gamify my writing – I started doing that when I was in jr. high school – and so merging Shine and Radiance into a a gamification of novel writing was just an obvious choice. I almost exclusively play Radiance as a journaling game, utilizing the storytelling principles outlined in Shine, and writing down what happens.

“The Luminous Campaign Engine, on the other hand, came about years ago when I realized that Shine (early versions were for both writers and gamemasters) should ultimately be split into two systems. Gamemasters don’t get to determine the actions of the main character(s) and so their needs are entirely different from writers – even if Luminous pulls in many of the “common human patterns” principles from Shine. Fast forward to the early days of Critical Role – watching Matt Mercer use some of those same storytelling principles in his campaigns – and it suddenly occurred to me that maybe some of these ideas weren’t crazy after all.

“As I’ve graduated from GMing for my kids and their friends to GMing two days a week for my 12-person adult game group, I’ve spent a lot of time further honing Luminous to my GMing style. I have made the mistake of running overly story-heavy games and I don’t like how they sometimes limit player agency. So, Luminous focuses mostly on creating a great story arc that players may dip into as they wish, then suggests a set of practices that center around good session prep techniques, and then wraps up with some processes for keeping your grand story arc relevant to the players actions. My preference tends to be for techniques that don’t take a ridiculous amount of time for GMs with school, jobs, and families. Put in another way, Luminous is a mash up of Shine’s principles of storytelling combined with notes about all the horrible mistakes I’ve made as a GM.”

The Radiance Adventure Engine is a system agnostic tabletop RPG (TTRPG) supplement from Oddfish Games. It can be played as an individual system, or used to propel the plot of any existing system. My last review for Oddfish Game was for “How to RPG With Your Cat”, another system agnostic TTRPG enhancement which allowed enrichment activities with your cat to determine the outcome of moments within your TTRPG, which shows their existing penchant for this type of product. Incidentally, it is an option to add the prior game to your pledge.

At the time of this article, Radiance has an active Kickstarter campaign ending 10/10/22, which has already succeeded twice over and is aiming at stretch goals. Below will be focusing on the core game, and none of the other products listed in the Kickstarter (Radiance Advanced, Luminous Campaign Engine, and Shine Storytelling Game) 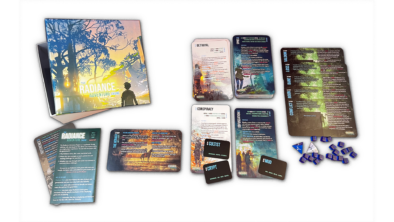 Due to the abstract nature of the game, it can be a narrative tool on its own or as a template to supplement an existing system. The golden rule applies here, where you keep what works and repurpose what doesn’t in order to encourage game flow. As a standalone, there is a flow to drawing cards, tracking results with dice and cubes, and advancing the plot. The image below is presented on the Kickstarter page.

While the above image may seem like a lot to remember, the Zine-sized rules are pretty simple and intuitive, requiring little overhead to any given moment. You start with a base story card which will represent the overarching plot and a detail card to flesh it out. When determining “today’s episode”, so to speak, draw a Stage card. It will direct you on any Story, Detail, B-Story (Boons/Complications) or Paths cards that will be immediately needed. You then draw any Action cards that are required to resolve the Path, which may lead to drawing further cards from their respective decks, or making rolls in the system that Radiance is being applied to. A Path can also be “abandoned” if the player(s) aren’t enjoying the current one or do not see a way forward that enriches the game in progress. A new Path is drawn, repeat steps as needed. Eventually you will resolve a Path, which will build to resolving a Story, and then the Stage you are presently working on, allowing you the opportunity to pause for the day or reveal another Stage and run through the steps again. 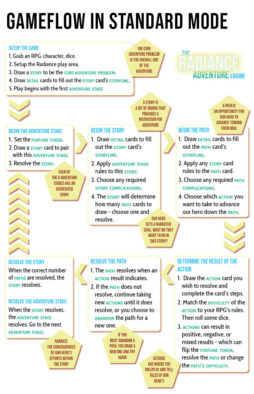 Following in the same vein as other system agnostic supplements, the elasticity of the game is its greatest asset. It does not require or lean towards any one setting (the Kickstarter art uses fantasy as well as cyberpunk imagery), it can be added to and removed from an existing campaign seamlessly, and has no set duration for a game to be “won”.

A natural side effect of players being welcomed and encouraged to flesh out their world is to remove some of the onus from the Gamemaster, and can really fuel one-shot sessions. Thus another attribute of the system is its ability to draw new players into the game. Even if they don’t understand the rules of the root game, they can be part of it in a real way that keeps them engaged.

The art itself is wonderful. Story cards are expansive and action cards are dynamic. From the items available, it’s a style that can fit in with any setting.

Finally, a hidden gem of Radiance is not even a gaming-exclusive feature. It can be used as a writing prompt generator for all of you authors/writers out there.

When it comes to games reliant on a number of cards, table space becomes a commodity. This game sports several decks in addition to the resources of any TTRPG that it overlays. Also, due to being a physical supplement it hits limits with online play. The best case scenario is someone possessing Radiance affiliated products would have to perform a combination of reading, photographing, and managing the resources in play. It is still a workable system, but it loses some of the effect when the players can’t reference without interfering with another player’s experience.

Lastly, while the text of the cards is easy to read and stylized text highlights when other components are needed, some cards are a bit busy and become a wall of text and a little bit daunting to read all at once, then create a whole concept around it, and apply whatever additional cards are needed to the process.

Pulling it all together, Radiance Adventure Engine is a different way to engage your RPG table. Whether you use the resources included to keep things going with a game in progress, or to come up with something from scratch with nothing further, you are quickly put in scenarios that require creativity and aren’t devised around how many things can be militantly conquered as a solution. (Okay, maybe sometimes… But there are plenty of problems and resolutions that are very roleplay friendly.) The biggest drawbacks to card-based systems is table space and communal access to all players in the game. However lightweight the rules are, it can be a lot to remember when multiple details, boons, complications, etc. all get roped into one story at the front end.

As always, the bottom line comes to “Is it fun?”

The Radiance Adventure Engine, even without being enhanced by other supplements is incredible fun if you’re in good company. You can see in the demo videos posted on the Kickstarter that the players and GM alike are enjoying the game quite a lot. Anytime the players are part of the world, and the world’s not just happening to them is a more enjoyable experience.