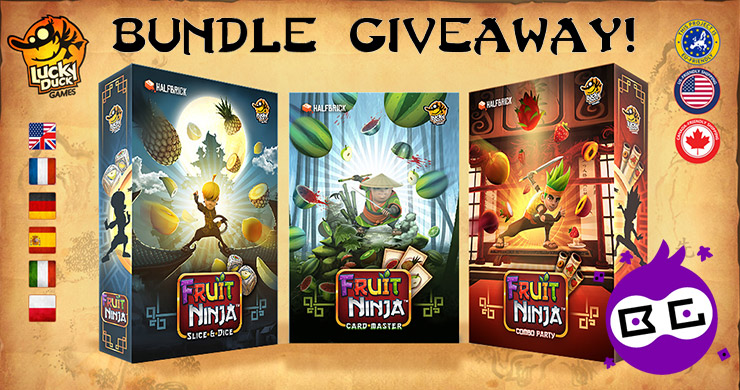 Fruit Ninja is coming on Kickstarter on the 17th of October! Here’s description of all three games as taken from Lucky Duck Game’s facebook page: 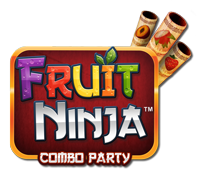 Fruit Ninja: Combo Party is a 3 to 6 player game mixing drafting, pushing your luck and dexterity!
Each turn is composed of 2 phases:
Fruit Phase: all players choose a single Fruit from their deck. All cards are revealed at the same time. If at least two players have the same Fruit, the first one to grab the central totem get a reward card!
Scoring Phase: each player has to decide if they want to keep growing their current Combo, pushing their luck to score more, or if they want to score immediately and start a new Combo. The bigger the combo, the more rewards!
At the end of the turn, people pass their decks to the person on their left! 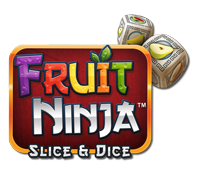 Fruit Ninja: Slice & Dice is a strategic dice game for 2 to 4 players where each player is trying impress Sensei by slashing specific combos of Fruits.
Each round is split in 2 phases:
– Rolling Phase: simultaneously and in real-time, all players have 20 seconds to roll up to 3 times their dice.
– Buying Phase: in clock-wise order starting from the first player, all players get a chance to spend their dice result on Combo Cards and claim one of the 6 Goal cards.
The game ends as soon as the Combo Deck runs out. The winner is the one with the most points! 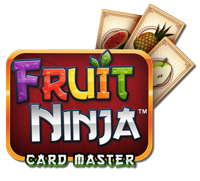 Fruit Ninja: Card Master is a fast-paced deck building game that allows 2 to 4 players to compete and prove their wit and dexterity. As ninja apprentices, they need to master their arts and prove to Sensei who is the most worthy trainee.
The game takes place over four rounds in which each player has to play their 15-cards deck in a real-time match-making showdown. After each battle, players have a chance to upgrade their cards and improve their deck!

Lucky Duck Games is giving away a bundle of all 3 games
of Fruit Ninja!

Complete the actions below and get
as many entries as you can for a chance to win!

The game will be given away and shipped by Lucky Duck Games. The winner is picked randomly and will be informed within a week after the draw! All giveaways follow BoardGame Stories’ Terms and Conditions!